Say Bye to the Villains

The game's description says it all:
"A cooperative game of vanquishing villains".

Within the cooperative spectrum of games, I much prefer this game over Hanabi and Pandemic ...although the game might not appeal to everyone*.

Players: 3 to 8 - arguably harder to win with more players (but that makes the game fun).

Availability: Seems to be available online,

The classic final showdown between villain and hero is something that is well-known to video game, comic-book, fiction, and movie fans alike. That is one of the main reasons why I like this game: because the entire emphasis is on the ultimate head-to-head battle against a worthy foe.

All 8 heroes that may be selected by the group have a unique super power or trait, as do the 8 villains. The general gist of this game is that all players must defeat all of the villains in a final battle. In any given matchup, the battle is played out by comparing a villain and hero's Speed, Power and Life points. However before this happens the Heroes must spend time investigating the Villains in question to determine their strength and weaknesses, whilst boosting their own collective strength. The villains have all sorts of cunning tactics hidden up their sleeves such as hidden weapons, ambushes/traps and loyal henchmen all willing to fight for their cause.

I genuinely think this game does a good job of overcoming the main problem that Pandemic had: namely, and this is a common occurrence in cooperative games, the fact that one 'aggressive' or more outspoken person can boss everyone around by telling people what to do.

In contrast, in Say Bye to the Villains, it truly does feel like each player is in charge of their own character's destiny and is privy to the weaknesses and strengths of their character. That is to say, only you know what cards you have in your hand and whether you are strong enough to take on a villain (particularly if you are the only person who has checked on the strength of a certain villain). Therefore, it would be ridiculous, and largely impossible, for other players to simply give commands or orders to the group without at least consulting or discussing the options at hand (but of course, it is likely that a more vocal spokesperson for the group will emerge over time, but this is fine - in the spirit of cooperative games - so long as everyone is consulted).

I also find the variety of weapons and statistic boosters (for both Villains and Heroes) quite fascinating, and with the deck properly shuffled, there is almost always a tricky surprise in store for the good guys. For example, there is the Secret Passage card which gives a villain an extra 99 Life points - making him or her impossible to defeat unless the hero has the card that grants Infinite Power or a stalemate in the battle is an acceptable victory condition.

* Reduced from 8.2: Not everyone will like this game though, especially if they aren't into adding up numbers and don't relish the idea of a boss battle. Although I really like this game, my rating ought to consider the general populace - and the game might only satisfy a particular niche of people (ie. those who enjoy boss battles in a video-game type of game mechanic) for the reasons stated! But even then that doesn't stop it from being a great game!

What makes this game fun?
If you are the type who enjoys a finale between villain and hero (as I suspect many of us out there are!) and if think you would enjoy that theme in the context of a cooperative game, then give this a go!

The general aim of this game is to defeat all the bad guys. Each hero must take on a bad guy; but before that happens, some preparatory work needs to be undertaken!

Draw as many villains as there are players (Eg. if playing a 5 player game, draw 5 villains).

There are 8 villains in total to choose from, half of which are shown below just to give you an idea of what they look like: 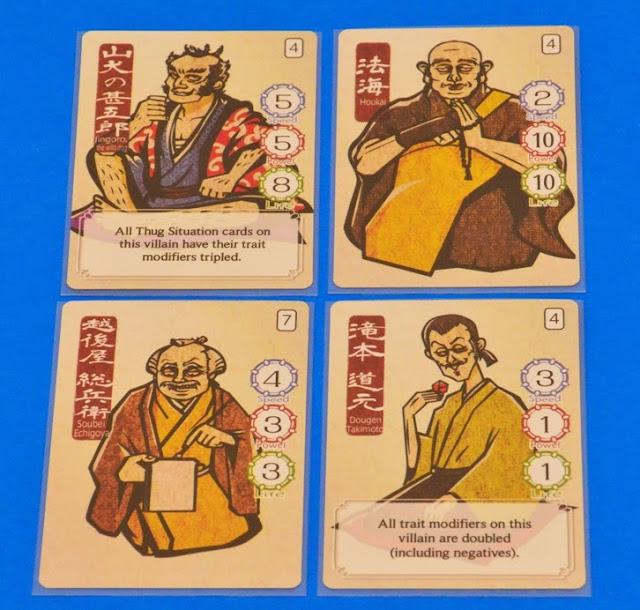 The number in the top right corner of the villains card indicates how many black "resource" or "situation" cards each villain receives facedown. These cards generally boost the villains powers significantly.

For example, Soubei Echigoya, whilst having relatively weaker statistics (4 Speed; 3 Power; 3 Life) has 7 resource cards to compensate for these low stats.

For example, this is what the villain setup would look like in a three player game, assuming Soubei, Jingoro and Houkai are the villains:

Choose your heroes or vanquishers

Now players draw as many heroes as there are players.

Also, draw the black vanquisher cards that correspond to the heroes in question. Just to give you an idea of what they look like, three heroes and their respective vanquisher cards (the ones with 'cool' looking outfits) are shown in the example below:

The second use of the Vanquisher card is fantastic: the flipside of the card is a great summary of all the actions that can be used in the game: 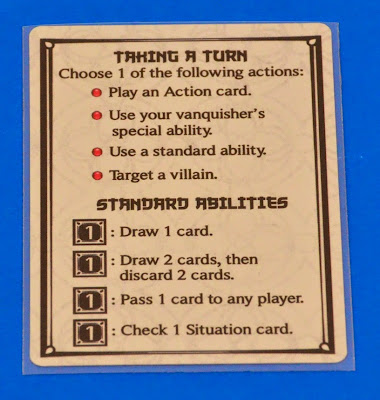 Each player gets a hand of 7 white player cards which should be kept secret from all other players.

1) Play an action card. Obviously some action cards are more powerful than others (see below for some examples).

Concept of time: At this point it is important that I explain the concept of 'time' in this game


2) Use your vanquisher's special ability at the cost of 1 unit of time. For example, Tatsu can reveal 1 villain's black situation card at a cost of using up 1 unit of his time by flipping over any of the black cards like so:

When using Options 2) or 3) above, in order to represent that 1 unit of time has been used up, a player must play one of their cards face down. For example this is what the table might look like after several plays: 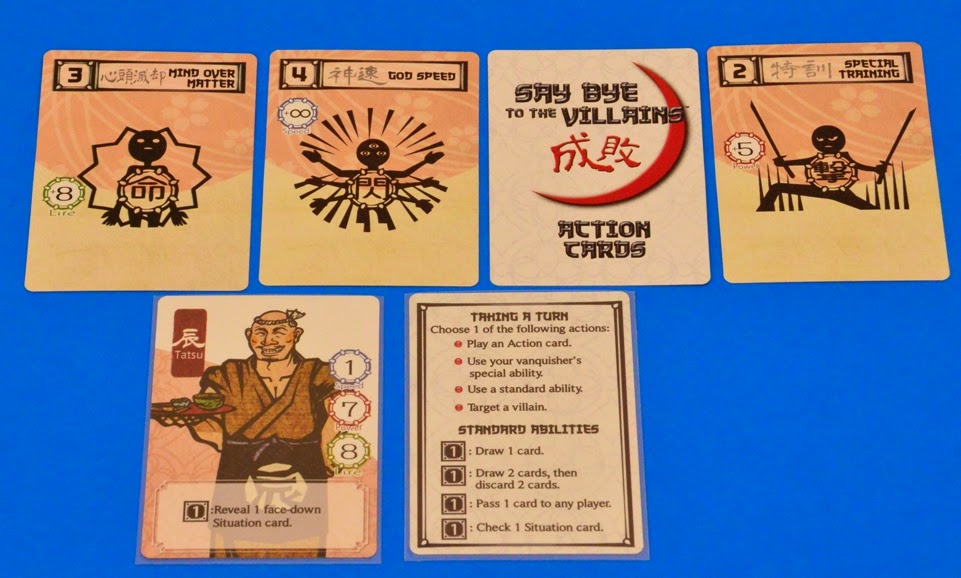 
This player's total time is 3 + 4 + 1 + 2 = 10. Therefore they must immediately target a villain as they have reached their maximum limit.

When all heroes have targeted a villain, a battle ensues between each villain and hero.
The statistics of both heroes and villains are added up and compared.

Using the above picture as an example Tatsu has:

Suppose that Tatsu targets Jingoro the Wild Dog and that these are the revealed situation cards of Jingoro:

The final statistics of Jingoro are, therefore:

Description of the Statistics by way of example

In a showdown, Speed dictates who attacks first. If the person defending survives, they get to counterattack. After that no further attacks are made.

To win, ALL heroes must:

1) Not die (ie. Lose all their life, which occurs if the Villain's Power > Hero's Life) AND
2) Be able to kill the villain (ie. Hero's Power > Villain Life).

In the above example, Tatsu has the higher speed (Infinite > 7) and therefore attacks first. However his crazy speed won't do him much good because his Power (ie. damage) is only 12 which is nowhere close to destroying Jingoro's Life of 110.

Jingoro would then counterattack with a Power of 10, which is not enough to overcome Tatsu's Life of 16.

This ends in a Stalemate as neither side has died. Unless the victory condition has changed (which rarely happens), the heroes lose as a stalemate is not enough for a victory.

A Note on Communicating

If you do find out information about a villain, you must never reveal the statistics or the items stated on any of the villain's black cards. The same rule applies to what you have in your hand - you can't mention the name of the cards you have nor can you mention the precise numerical statistics they give.

So you could never say:

1) "I can handle that situation card"
2) "I can target Villain X"
3) "I reckon Player A and D can target Villain X, but Player C would get destroyed if they targeted Villain X."
4) "I need more Power, can anybody give me some?"
5) "Who needs Power? I can give them some?"
6) "Can anyone defeat Jingoro?"
7) "Can you investigate Jingoro for me please?"