For the sake of good humour, interest and amusement, I'd like to list the teams that I want to (rather than those that will likely) go through to the Round of 16:

Group A: Cameroon and Croatia

Group B: Australia and Netherlands

Group E: No real preference to be honest, though Switzerland and Ecuador might be favoured

Whilst not strictly speaking a board, party or card game, this gem of a puzzle series is close enough and certainly warrants a mention!

It's a well-crafted, albeit child-like, pastime for those who love their geography. 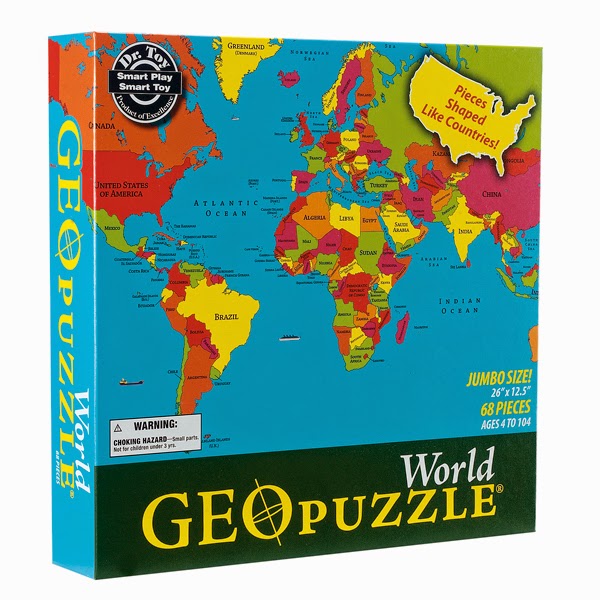 Name: GeoPuzzle series (unknown date -- let me check. I believe the new edition is as of 2012)

Time to play: Quite fast - 20 minutes? More or less depending on your knowledge and whether you use the map given on the front box.

Note that there is a newer edition and an older one - you can easily tell which is which by the style of the "GeoPuzzle" logo. The newer editions are more updated as that they contain new countries as indicated in the below list. However, it probably won't hurt to purchase an old edition of GeoPuzzle for a region which hasn't had a new country in recent times as the puzzle is likely to be more or less the same.

From my understanding there appear to be 6 regions in total [known new countries in square brackets - perhaps borderlines have slightly changed since the old editions?]:

GeoPuzzle Europe [newer version contains Kosovo, which hasn't as such been fully recognised as a country at the time of writing]
GeoPuzzle Africa and Middle East [newer version has South Sudan]
GeoPuzzle Asia
GeoPuzzle United States and Canada
GeoPuzzle Latin America
GeoPuzzle World [Presumably this too is also updated to reflect the above changes]

You can buy all of these as one pack, but I'm not sure if it's worth it if you are only after a particular region (For me Africa and the Middle East seems to be good value) 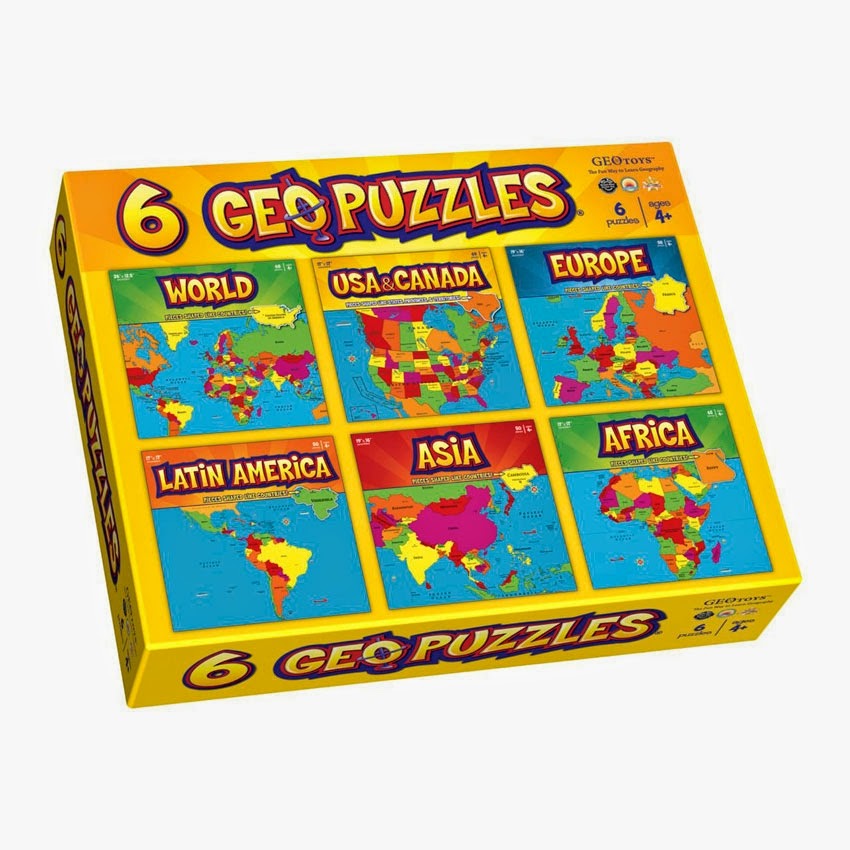 Price Range (AUD): $18 to 50 including shipping. However, it depends on which version of the game you purchase.

** NB, on the 29/5/2014 I received my copy and it wasn't an old version but a new one - what a pleasant surprise; I suspect the website displayed the wrong edition picture.

Being a puzzle, this doesn't really require an explanation and by reading this far and the points below, you'll have a good taste of what it's about. However I will say that the puzzle is well-made and (from my limited understanding of geography) accurately portrays the borderlines and shapes of each respective country and is well up-to-date with newly formed countries.

The key feature of this puzzle, and it's a very cool one at that, is that the majority of pieces (apart from the border pieces and those that are too small or inconveniently located for that to happen) are shaped like countries.

*July and September 2014: Revised down from 8.1+. This is still a great puzzle to do but the infuriating thing is that it is extremely difficult to put all the pieces together without them jutting up or protruding (especially when you do all the border pieces first and then you start fitting in the countries - particularly for the African and Middle East Map). Perhaps a flat surface would help, but it's still hard to do it - but I suppose that is the nature of the beast given that the pieces are cut to match the exact dimensions of each country (hence, some pieces are jagged and hard to put together evenly).

What makes this puzzle fun?

Testing and increasing your knowledge of countries (in a quick manner) is a great feature of this game if you love geography or are a fan of cultural awareness in general. 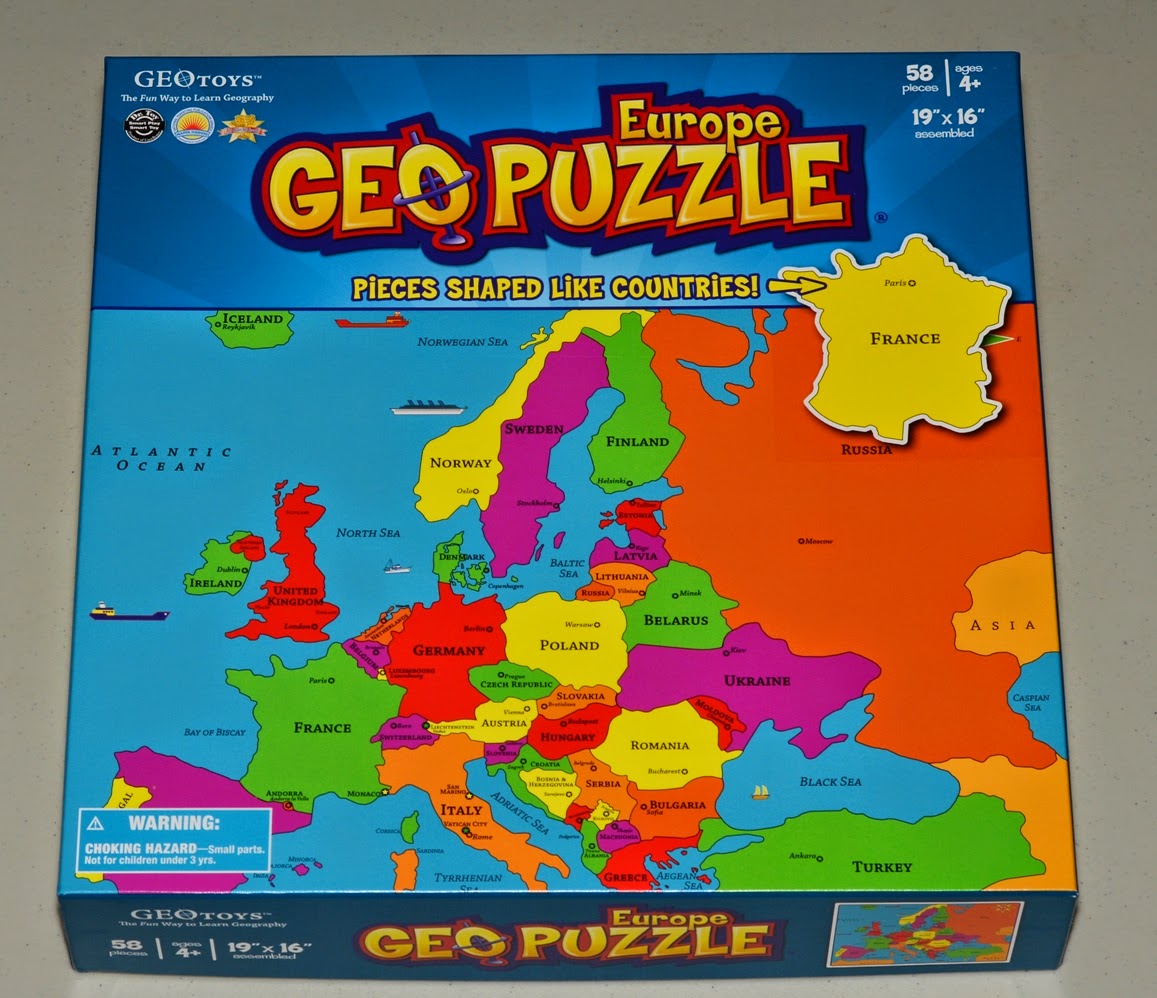 As you can see, the box is quite big.

The pieces are in fact shaped like countries - but as you can see below, some pieces are not strictly based on the borderlines of countries. For example some countries may be joined together to form one piece whilst one other piece may only feature half of a country (this is understandable as presumably this is to help fit the puzzle together - if all the small countries had their own shape it might be hard to piece everything together) 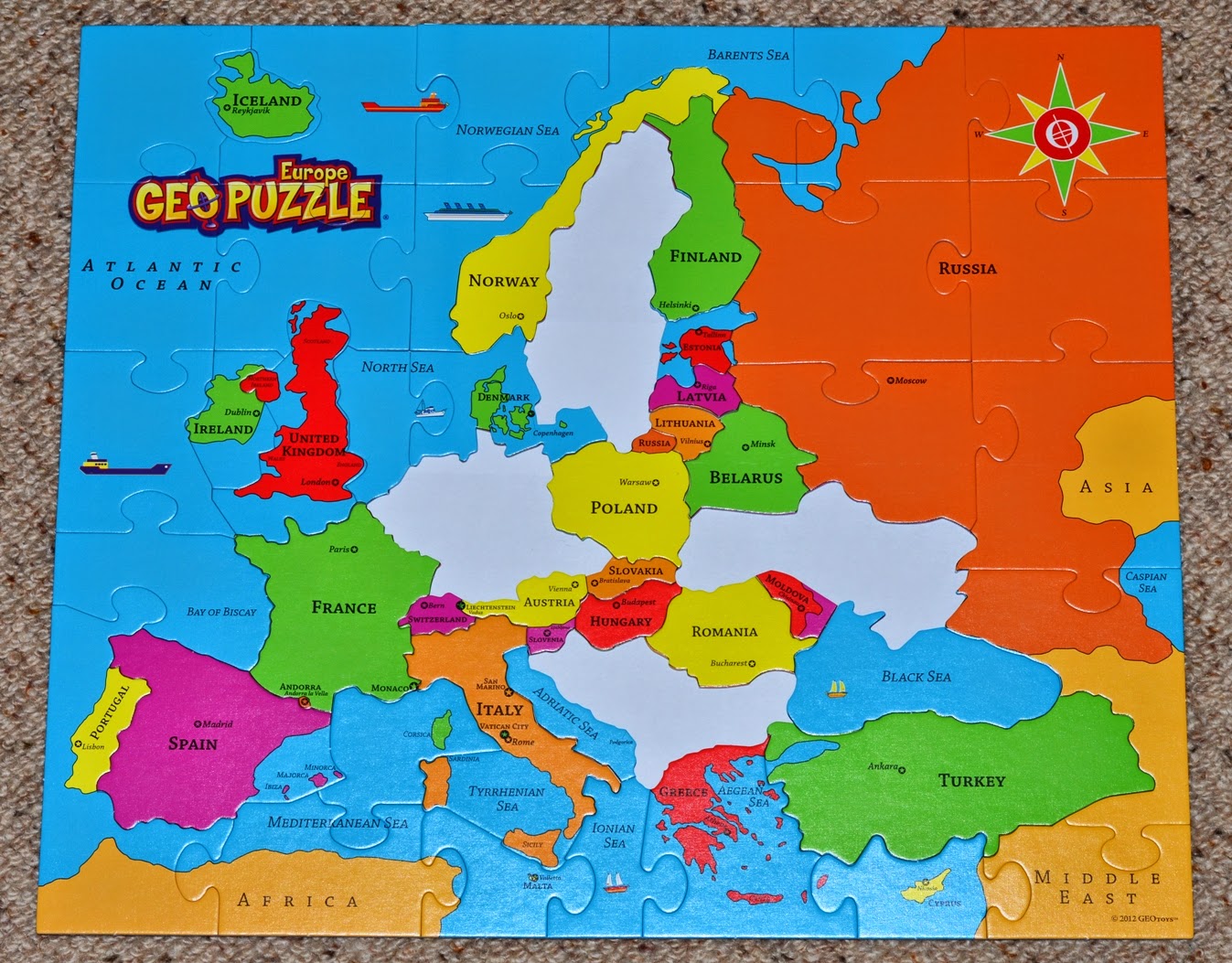 And this is what the completed puzzle looks like: 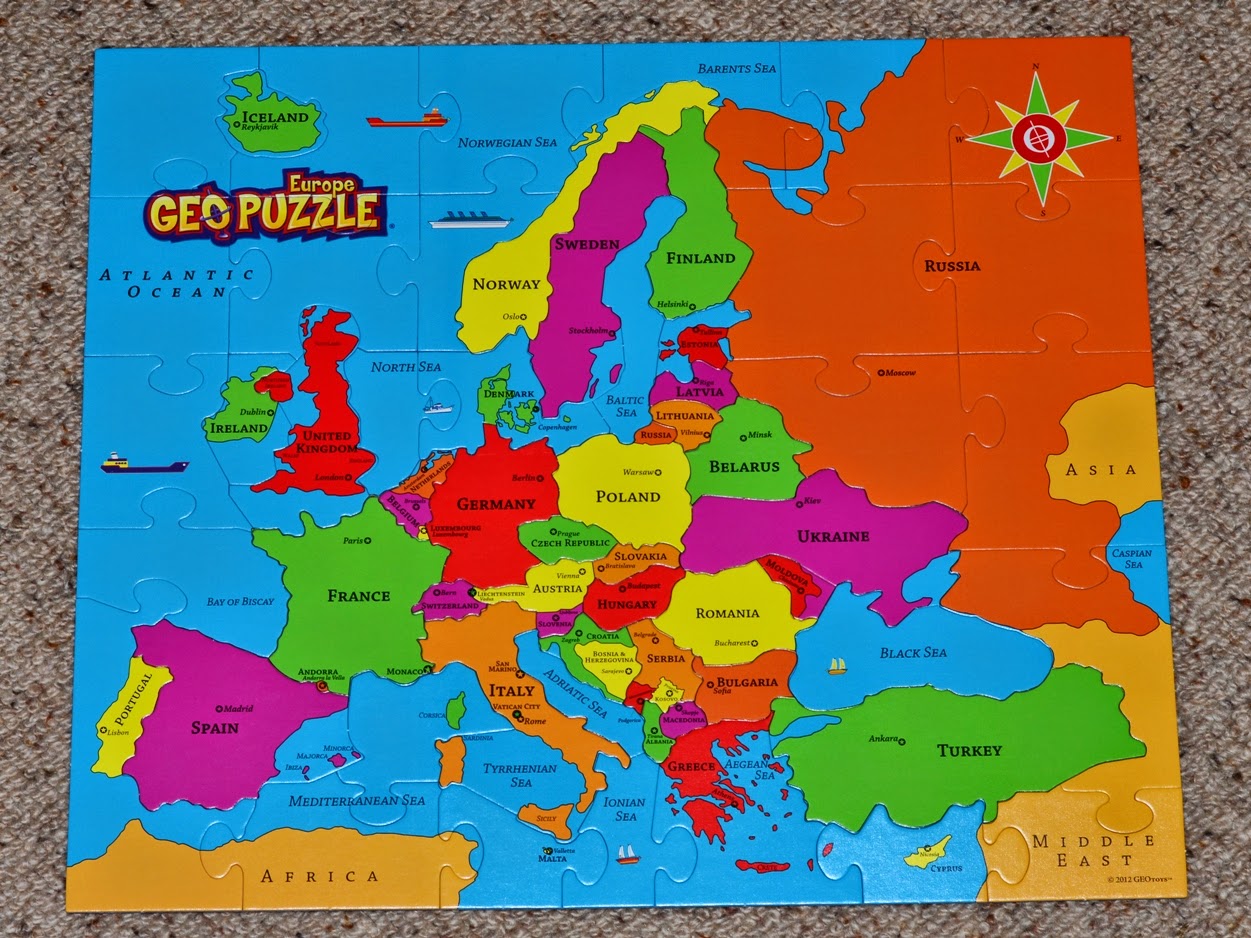 I deviate momentarily from games to talk about the 2014 FIFA World Cup.

I'm sure this has been done before but I find it quite interesting to analyse the various combinations of points possible in the Group Stage. For those who are unfamiliar with the Group Stage, basically it's a round-robin format of 4 teams where each team plays each other only once. Only the top two teams qualify for the next round of 16.

I will attempt to artificially categorise and describe the situations that lead to each permutation. All credit goes to the lovely contributors at Wikipedia for their helpful tables and links.

This is the most common group that one can think of - two dominant teams, A and B, with A being significantly more dominant than B. The other two residual teams in the group, C and D, are simply no match for the two dominant teams so their results against each other don't really matter.

There are two variants I observe here:

Here, A is clearly the strongest. It is equally clear that B is second strongest. And C is third strongest, being stronger than weakest D. Typically you would expect 9, 6, 3, 0 points in that order from first to last.

In this variant, A is clearly the strongest. It is equally clear that B is second strongest.
However, C is comparable in strength to D.

This is a major variation to Category 1.

The variation is simply that the powerhouses A and B are almost equal in strength.
Thus this means that, at least in theory, A and B should neutralise each other out and draw against each other. A and B are expected to (but don't necessarily) win their respective games against C and D.


Variant 1b).1 [Flawed Duo]: This occurs where one of the duo fails to meet expectations and doesn't win one of their games against weaker teams C and D.


Variant 1b).2 [Standard/Classic Situation]: A and B each deal with C and D relatively comfortably but draw with each other. Expectations are therefore met.

This creates an apparent logical fallacy in the sense that A is expected to beat C yet in fact loses to C!

The common factor, however, is that D loses to everyone else as D is easily the weakest in the group.

Goal Difference, Goals For and Head-to-head appear to be determinative here in separating 1st, 2nd and 3rd.

Category 3: Survival of the Second Fittest

In this situation, A is grossly (perhaps even absurdly) dominant; whereas B, C and D are all of comparable strength and must scrap for second place. It just takes 1 key victory amongst teams B, C and D for one to separate from the rest of the pack!

Note that the difference between this group and the others is that 3rd place (Greece) actually wins a game against 4th place (Nigeria).


Variant 3.1 [Tiebreaker Required]: Here, the difference between second and third comes down to Goal Difference or Goals Scored! (by virtue of each team drawing and winning one game each)


Variant 3.2 [Undefeated Second]: This occurs where 2nd place is snatched by not losing to any member of the group (this is extremely rare and is unlikely to be successful - note that New Zealand were undefeated in the 2010 World Cup but failed to proceed to the knockout stage)

In this category, the points in the group are very evenly spread amongst all teams either because of:

ii) What I call a broken love triangle (basically a Category 2 situation where A > B > C > A but the last group member D does NOT score 0 points but manages to draw and win a match).

In this case Ghana > Serbia > Germany > Ghana but Serbia loses to Australia and Australia draws with Ghana, hence the broken love triangle.


Imagine a group where everyone draws all games -- I don't think this has happened from 1994 onwards? (or ever?)

This category is, strictly speaking, not categorised by final points but by apparent closeness in contest between high-ranking/seeded on the one hand, and seemingly underrated teams on the other, before the competition starts. It is usually a phrase thrown around by the media in anticipation of the World Cup to generate hype.

It often happens when at least 1 "good team" (that has enjoyed previous success) fails to be properly seeded, perhaps because they have not been doing well of late.

To make for a "proper" group of death, there probably ought to be at least 3 strong teams and perhaps 1 average or stronger-than-normal team. Another way of checking to see if there is a Group of Death is to add up the seedings of all the countries - the lower the number, the more likely you have a Group of Death.

One credible World Cup example would be Group C 1982 FIFA World Cup, but this only had 3 members:


I'm not sure whether any credible Groups of Death existed from 1994 and onwards (when the 3-point for a win system was used).

Arguably, Group G 2010 FIFA World Cup fell short of the mark because North Korea was not "average" by any means, though some media outlets thought it was a Group of Death at the time:


However, a good non-World Cup example is Group C Euro 2008 where 2006 World Cup finalists Italy and France were drawn with Netherlands and Romania.


Another good example would be Group C Euro 1996 where the respective world rankings of the groups members were 2, 3, 7 and 10!

This category accounts for all the left overs. We are talking about random patterns and oddities here. In other words, this category involves a combination of one of the above categories.

For the time being I can only think of one group that partially (though not completely) fits the bill:

In Group H 2010 FIFA World Cup, whilst Spain and Chile were the dominant teams, Spain somehow lost to Switzerland in its opening match. Spain were "lucky" that Switzerland only drew with Honduras and that Chile did not score more goals against Switzerland.


It is probable that this would fit into the Flawed Duo variant mentioned in Category 1b).1 above, but it doesn't feel completely right categorising this group as such because the top team loses to the 3rd-ranked team.


So that's all for now.
Have I missed anything?
Perhaps more to come later...

Andre Lim
Posted by Andre Lim at 19:30 No comments: