After watching the Four Corners program on 7-11....

... there is absolutely no way that this regular customer (ie. me) will be theirs any longer.

I am almost ashamed to have purchased anything from their stores =(

Andre Lim
Posted by Andre Lim at 21:33 No comments:

Tell me who your friends are and I'll...?

We have probably all heard the full quote that is the subject of this post before but I'll say it in full for the benefit of those who have not:

"Tell me who your friends are and I'll tell you who you are."


It's a pretty bold proposition isn't it.

But what does it mean? Isn't it just a matter of interpretation?

The other thing is, don't we have many different types of friends with different attributes? If that is the case, what does that mean?

For example, let's use a simple example and isolate friendships based on these two related attributes:


When I refer to these two categories of "Outgoing/Extroverted" and "Introverted", what I mean by that is, out of all the attributes those friends have, their dominant attribute is that they are either Outgoing or Introverted. Thus, their relevant category is not the only attribute they possess, but it is the attribute that stands out the most for all to see.

If all my friends were Outgoing friends, perhaps the conventional conclusion is this: we can say with some degree of certainty that I am likely to be an Outgoing person.

You could say the same for the opposite situation - in the scenario where all my friends were Introverted friends.

However, what if exactly 50% of my friends were Introverted, and the other 50% were Outgoing?

Does that make me half and half?

But, in my view, a very plausible alternate explanation is this: I might belong to one category outright, but I simply happen to be tolerant of the other category of people because I highly value their other attributes.

That is to say, if someone was seen to be amongst many Introverted friends, that does not automatically make them Introverted - there are a multitude of reasons why people pursue certain friendships, and without knowing more about why that person was associating themselves with these Introverted friends, it would be far too early to assume that they were Introverted.

That person who was seen with the Introverts could very well be Extroverted but they just happen to enjoy the other attributes shared by their Introverted group of friends.

Similarly, it should not (necessarily) come as a surprise to find a "Polite" person huddled in a group of "Rude" people.

Of course, this discussion says nothing about the degree of friendship with those friends - for example, perhaps the Extroverted/Outgoing person I talked about before might highly value "Extrovertedness", and thus, there is a limit to how close their friendship with the Introverted people can be.

Similarly, a "Polite" person might place "Politeness" as their #1 attribute.

If that is the case, then of course, no matter how much they enjoy the company of a group of "Rude" people (due to the other attributes they possess), there can only ever be a ceiling on the strength of their friendship with those "Rude" people.


The reality of the matter

I can only speak for myself here, but perhaps this is true for a lot of people:

The reality of the matter is that we are likely to make friends from all walks of life, with all kinds of personalities, backgrounds etc that are shaped by their past, family or other circumstances.

I might for example have an assortment of Rude, Polite, Cunning, Shy, Passionate, Quirky, Outspoken and (**Insert other attributes**) friends.

Rather than assuming that I am all of those types of people in one go, perhaps the better answer is that I enjoy their company for different reasons that have no relationship to their predominant attributes or personality types (until this is disproved of course!).

So while the quote at the beginning of this post can be used as a rule of thumb, I am not so sure it applies to all circumstances.

Looking for ourselves in others

I tried to take a nap but I wasn't tired enough to. So perhaps I will spend the time recording this short tale.

One chilly morning, while I was walking to work, I couldn't help but overhear a conversation between two elderly men.

It was unclear to me the nature and extent of their relationship - if I had to guess, perhaps they were close friends, or they could have been old ex-colleagues simply finding the time to catch up.

Judging from their energetic tone and lively mannerisms (despite the cold!), I somehow got the impression that these two fellows had been at it for some time and I just happened to stumble into their conversation.

(All speculation - I don't know of course)

However what was immediately clear to me was that the conversation had taken a philosophical turn:

A: "You know what Bob, in all my years of being a boss, I've come to discover one really important thing about hiring employees!!"

A: "Well, after many years of going through the recruitment process, I find that you tend to pick people who you reckon are a lot like yourself. That is, you can ACTUALLY see yourself in them."

(B pauses and gasps, as if he's stunned or caught off guard)

Unfortunately I had already reached my office so I had to tune out.

Now, if what A said is true, then this makes me wonder: can this concept be applied to other areas of life?

For example, when we decide whether or not to be someone's friend, do we subconsciously look for someone like us or do we look for something different? But wait, I thought opposites attract? Or does this latter rule only apply in respect of some characteristics, and we look for similarities in others?

And how about couples and marriage?

Does our spouse need to be like us or different to us? Or both? Or is it just completely random? :)

All very interesting questions that I do not know the answer to.

Andre Lim
Posted by Andre Lim at 20:30 No comments:

So what really is important in life?

My colleague showed me this profound 'article' today (Please click on the photo to look at it in full size).

I quite like reading these kinds of articles because it puts all my worries into perspective.

Nothing is as precious as life itself.


My favourite parts of his eulogy are:


"It is quite amazing how a major existential crisis can force ideas to crystallise at an extraordinary pace. It is as if the gift of crisis brings with it a certain sharpness of mind, cutting straight through a lot of the nonsense that can hinder the onset of real wisdom. The puzzle suddenly resolves itself, where previously no breakthrough really seemed possible...."

"So what really is important?

1. Being reconciled with God...Accepting God's will, being at peace with God's will in every moment...

3 To have trodden lightly in this world, leaving soft footprints behind. That is, having a clear conscience, to have left as little hurt in the world as possible...

6. Having absolutely no sense of "entitlement".

7. Lastly, Grace! The realisation that it is all a gift. We are held from moment to moment by grace alone. That everything is pure gift."


What an amazing person Dr Imbrosciano must have been.

Thank you for sharing this.

I do not know who you were, but I think you must have been a really cool person. I wish your family all the best and hope they are well.

Andre Lim
Posted by Andre Lim at 18:10 No comments:

It was my colleague's birthday last month.

Every morning, this colleague of mine would persistently ask me if I wanted a cup of coffee.

Now, I quite like this colleague of mine - he is very wise, kind, experienced and knowledgeable and, to this day, we have great philosophical discussions - but I don't drink coffee (nor do I drink tea) so I had to decline each time the offer was put to me.

Of course, I can drink coffee every now and then, but it has to be very sweet as I am a bit of a sweet tooth.

The fact of the matter is that I find that coffee (caffeine) doesn't really have an effect on me in small to medium doses - I can still sleep the same with or without it. By way of contrast, during my uni days I found that people would drink energy drinks or coffee to extreme limits (especially the night before an exam).

So I have never really understood the obsession with coffee. But sure, okay, I like the taste - coffee ice cream is great for example.

So the joke would be along these lines.

There was a period of time where my colleague would, at approximately 11am each day (his usual hour), make his coffee and then put in a special effort to walk by my door and ask me:

Each time I'd have to disappoint him:

"No thank you, appreciate it though"

On other days the following lines would pop up (in no particular order):

"You sure you don't want a coffee?"

"Thanks, but I'm alright---Thank you for asking me though."

"Why don't you drink coffee?"

"Sometimes, but not really on a regular basis"

"You should try coffee one day."

"You're the only one here who doesn't drink coffee!"

I'd then often hear him say this in the background to another colleague:

"One day someone will have to force Andre into drinking coffee..."


Our secretary also joined forces with my colleague and asked me the other day:

"So what DO you drink Andre?"

"Well.... I like to drink honey mixed with hot water at home."

(There is a silence - and then she bursts out laughing)

Still, another time, when it was my colleague's birthday, he sent this humorous email to the whole office with words to the following effect:

"So for my birthday everyone MUST have a cup of coffee (and that includes you Andre)."


So, given the above, I thought it would only be appropriate for me to get this mug for my colleague's birthday: 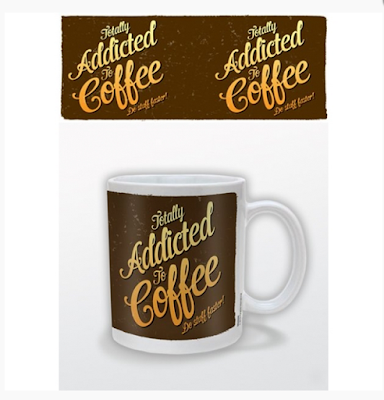 
I thought it was funny at the time.

However, I'm not completely sure whether he appreciated the joke though, as he hasn't asked me about coffee since I gave the mug to him...**

In a strange sort of way, sometimes I wish he'd start asking me again**.

I also bought this really cool Albert Einstein mug with this inspiring quote:


I have no special talents, I am only passionately curious. 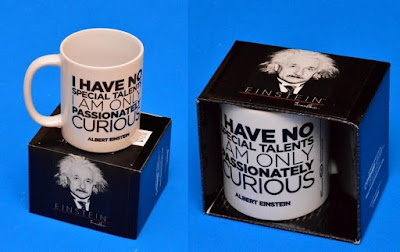 I feel that this is a good motto to have in life. So I have been using this cup at work.

The two cups come from Pyramid International who, as I understand it, have a large host of such novel products.

Interestingly, Albert Einstein and his image are trademarks of The Hebrew University of Jerusalem.

Wikipedia tells me that Einstein's image rights were bequeathed to the University and, apparently, the University employs an agent to enforce these rights at the commercial level.

The cups are rather pricey for what they are and cost around $25 each including shipping.

Perhaps I will focus more on writing small entries like this instead of long, over-the-top board game reviews or music lists.


** Murphy's Law: The day after I published this post, he asked me if I wanted coffee.

It's been too cold to sit at my computer and write something.

Hopefully the drought will break soon...

Andre Lim
Posted by Andre Lim at 22:30 No comments: