Except this time the challenge became a lot harder because everything is pixellated. 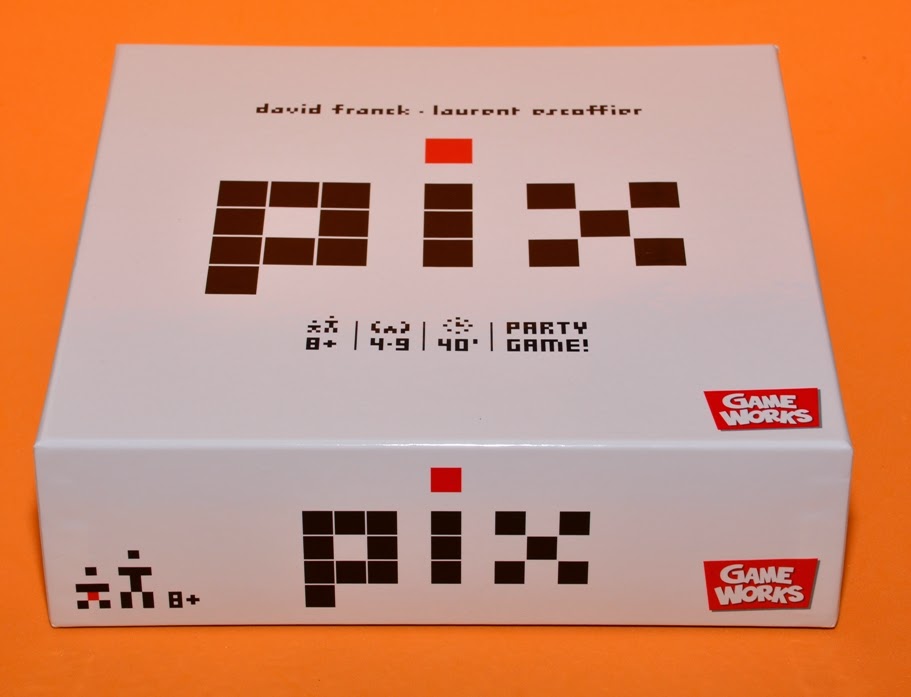 Publisher: Game Works amongst others

Time to play: 30 mins, though this is customisable.

Availability: Limited availability online as far as I can see - I can only see Amazon selling it at this stage.

The creators of Pix certainly had the right idea; unfortunately they seem to have 'accidentally' made the game quite hard (or was this intentional?). Therefore, I would not exactly classify Pix as a pure Party game, at least not as that term often connotes in the context of labelling a game under a certain genre. Nonetheless, I do quite like this game as I enjoy the challenge it offers, but my rating above reflects what I suspect the masses would think of this game. It can still make for a great Party game for those who have that creative mindset and aren't going to be fussed with a relatively difficult (and competitive) challenge.

In Pix, players must try to communicate a word by an image - this of course is a very familiar concept, except this time they can only use a limited amount of pixels (including a red pixel and a red arrow) to draw the word in question, which makes the game really hard. What makes the game even harder is the fact that the pixels cannot be rotated - they must be placed in a square grid and cannot be moved outside this grid (of course you can alter this rule to make it easier).

Competitive play is an interesting dynamic because Pix places places people into groups, and people within each group compete to draw words with as few pixels as possible (as whoever draws it with less pixels gets to show their drawing first, and hence, gets the first opportunity to score points). The constitution of each group rotates every round so there are plenty of opportunities for different player interactions.

The variety of words offered is quite good and the game even provides a pile of words that is the 'harder' deck. On this note, whilst this variety is great, the main problem with this game though is the fact that there is only so much one can do with 20 black pixels and 1 red pixel and arrow [the amount each player receives].  For example, trying to convey the words 'pneumatic drill', 'balcony' or 'bulldozer' with a mere 22 magnetic square pixels (which can only ever be organised in a grid formation) is a challenge for even the best of us - not to say it isn't possible of course. 22 sounds like a lot of pixels but this very point is illustrated by the examples given on the side of the game's box - many of these drawings have been done with much more than 22 pixels.

In summary, the game is often, but not always (depending on the word selected), incredibly difficult; it not only requires a creative drawer who is able to place square pixels in such as way so as to cater to the imaginations of the audience, but it also requires a creative audience who can recognise certain patterns which may not be immediately familiar. Indeed many of these finalised patterns come off as 'blocks' or masses of images that are completely unrecognisable. The 30-second timer also creates difficulties for guessers and drawers alike, but this rule can of course, be waived and replaced.

Nonetheless I think Pix is a good, and with the right group possibly even great, game; However for the reasons given above, it could have been better and, in my view, just misses out on attracting the general public.

What makes this game fun?
Treat yourself to a challenge - are you good enough to communicate a word to someone using only a handful of magnetic pixels?

It contains a timer; a set of black victory cubes (kind of useless); 9 magnetic boards; 3 decks of cards with words on them; lots of magnetic pixels (underneath)


Unpacking the box will let you see these: 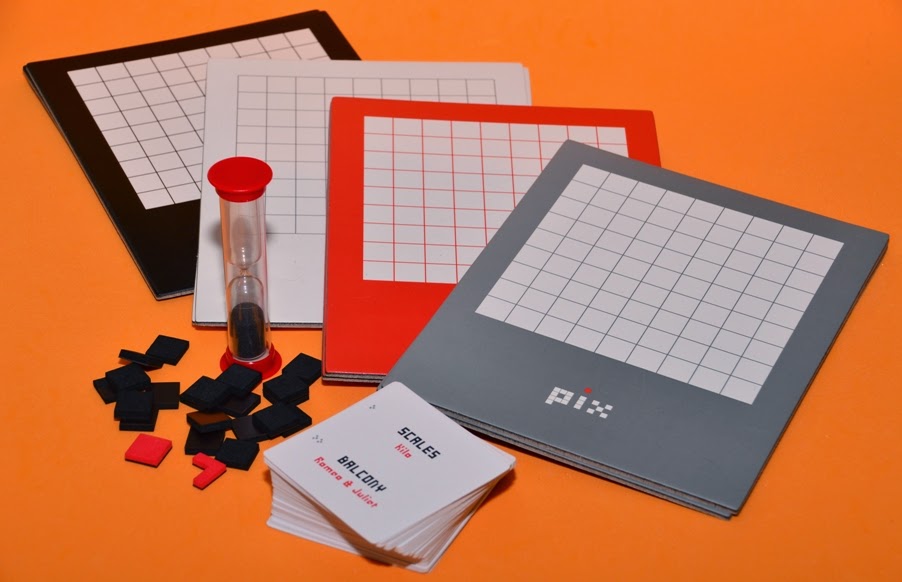 Give everyone 20 black pixels; a red pixel and a red arrow.

Depending on the number of people playing, here's how you set up the game.

Everyone has to sit in a circle, with the coloured magnetic boards distributed like so:


Gameplay (Best to just view the example below)

Please note that if you are a member of a group, you are competing against members of that group.

Each group shares a card: Each group takes ONE CARD and ONE card only per GROUP. Thus, this card is shared around. Each card has two words written on it so you will need to decide, quietly ('top one or bottom one') which word will be drawn.

Drawing: Then, all players will begin drawing their group word immediately.


Whoever finishes their drawing first says FINISHED and turns the timer over. From this point onwards, all players have 30 seconds left to finish their drawings.

When the time is up, each group takes its turn to reveal their drawings, individually. Whoever in that group has drawn their allocated word with the fewest amount of pixels reveals their drawing first.

The timer is flipped over at that instant as well. Everyone not in that group now has 30 seconds to try to guess what the word is from the drawing.

For example, in a 9 player game, the two members of the grey team, A and B, decide to draw the word Snail.

Player A finishes his drawing first so the timer is flipped over and all other players (not just Player B but Players C, D, E, F, G, H, I from the other groups) have 30 seconds to finish her drawing.

Both players discuss how many pixels they used for their their drawing. Player A says he used 7 pixels (5 black + 1 red arrow, as below). Player B says she used 22 pixels (20 black + 1 red arrow). Both did not use their red pixel.

Thus, as he drew with the least amount of pixels, Player A reveals his board (but not the card - this is kept secret) to everyone first:


Everyone has 30 seconds to guess the word; yes and no answers can be provided by the drawer but nothing more (I think - totally customisable if you want).

Assume now that everyone can't guess it; so then Player A hides their drawing

Then it's Player B's turn to reveal her 'more detailed' drawing: 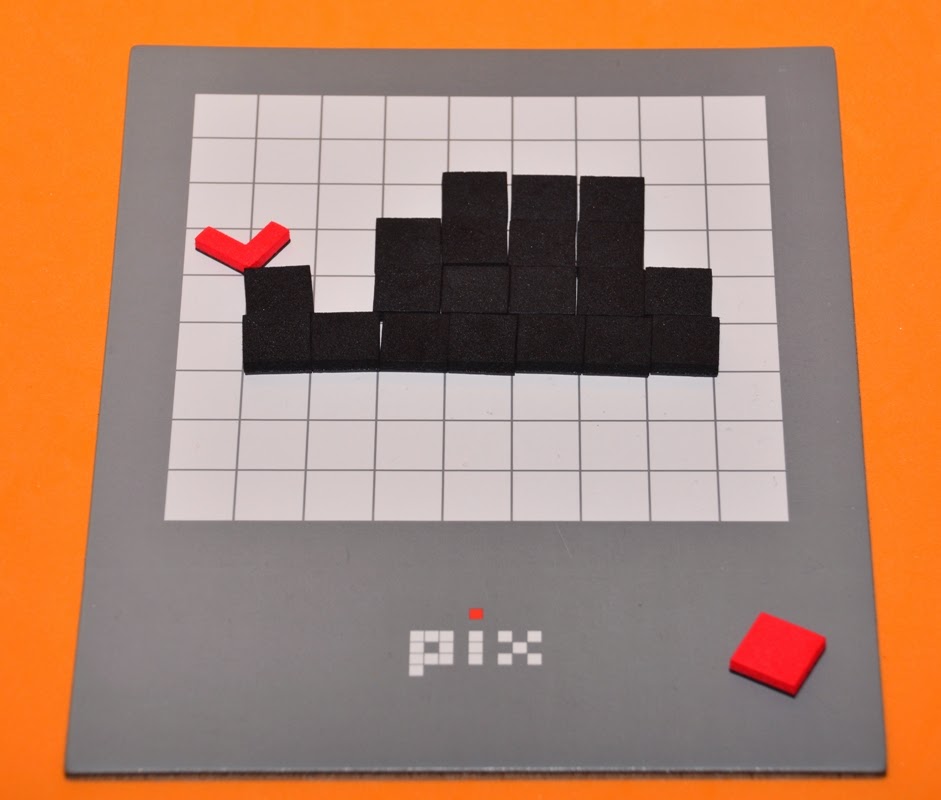 If no one can guess this either, both A and B will reveal their drawing and offer the clue of "shell".

If anyone guesses the word/phrase correctly when the clue is offered, A and B do not score points - the guesser is the only scorer. A or B only get points if the word was guessed when it was their individual turn to reveal their drawing.

The game rules other interesting ways to depict an elephant. 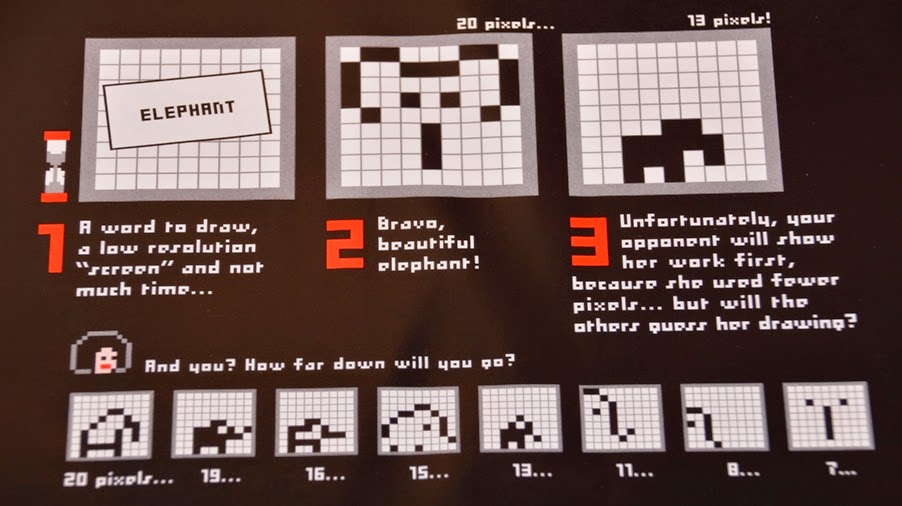 The person with the most number of points after 8 or 9 cards have been drawn (or however many you want), wins.
Posted by Andre Lim at 14:54