Word on the Street

Apparently this game's ambition was to get word games (like Scrabble) back into popularity.

Well, I am pleased to tell you that Word on the Street passes with flying colours. 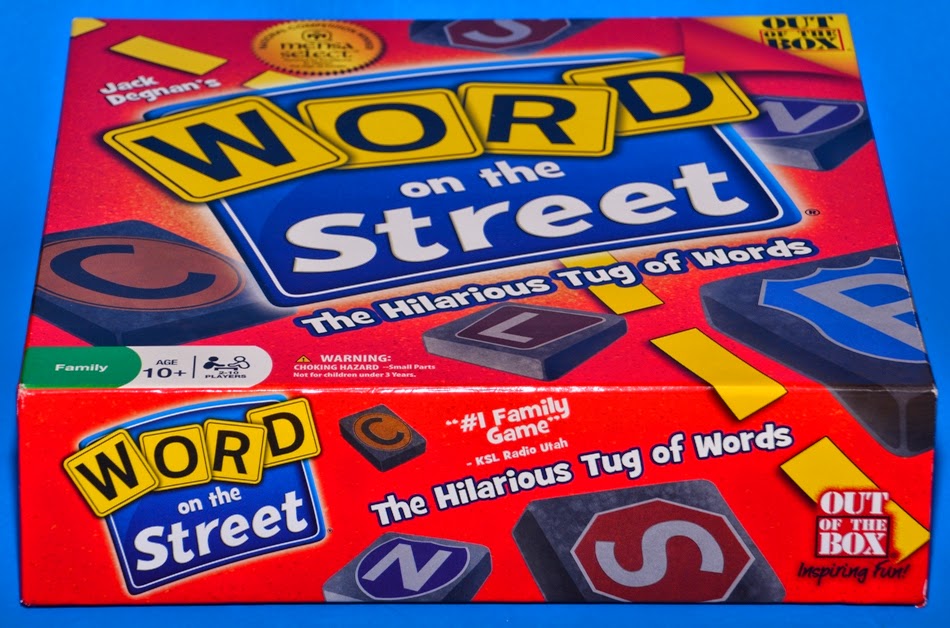 Publisher: Out of the Box Publishing

Availability: Available online and probably in a handful of local hobby stores.

Simple concepts are often the best concepts. This is not a new train of thought. Indeed, you will often find that overly-complex games are not necessarily good games (though, that does not mean that all complex games are bad of course).

Word on the Street is a great team game with a simple premise. Your team wants to capture 8 letters to your side of the street. How is this done? Well, a category card is flipped over - such as "Type of vegetable". You want to come up with words that fit that category (Carrot, Lettuce etc) ensuring the word contains the particular letters you want on your side. Words with lots of vowels will not do because vowels are not amongst the 17 letters on the board (26 less vowels less J, Q, X and Z - supposedly these are the more difficult letters??).

But the other team can drag those letters won by the first team back when it is their turn. Thus this creates some degree of tension and a tug-of-war; however this also creates interesting strategy choices: should you pursue letters that the other team has *almost* taken into its care or should you just focus on the uncaptured letters - or both? All routes are legitimate strategies and it makes for a fascinating battle.

The only dodgy thing about this game is the way in which disputes are resolved. So let's say you say something controversial - something not quite in a particular category. Then in that case, someone from the other team can challenge that word selection. This is a bad example but suppose someone says "Tomato" to the category "Type of vegetable".

The way this is resolved is that a majority of everyone playing must vote on whether that word rightfully belongs in that category (and clearly, assuming we are all competitive here, everyone on Team A is going to vote one way and everyone on Team B will vote another way - this is the problem: during the resolution of such challenges, you will rarely find an objective person who is willing to concede ground against their own team's cause).

Of course there is scope for discussion and debate as to why or why not a word should be accepted as part of that category, but due to the competitive nature of the game, it is very unlikely team members will concede ground against themselves. The example I have given above, however, may be an exception: I suspect most people will agree that Tomato is a fruit (Wikipedia even says berry?!) and NOT a vegetable (which begs the question, why did the team choose it?) - though some in the minority might try to raise the dodgy argument that it is the main ingredient in vegetable juice.

Perhaps you can resolve this issue of team biasness by having a person (preferably an impartial and logical person) who isn't playing in the game as an "umpire" or a "Court of Appeal" of sorts. Apart from this small mishap, Word on the Street is fantastic.


The Good:
The Bad:
What makes this game fun?
The fact that you and your team have to come up with words containing particular letters for a certain category  (to tug as many letters as possible to your side of the street) makes this game quite interesting. 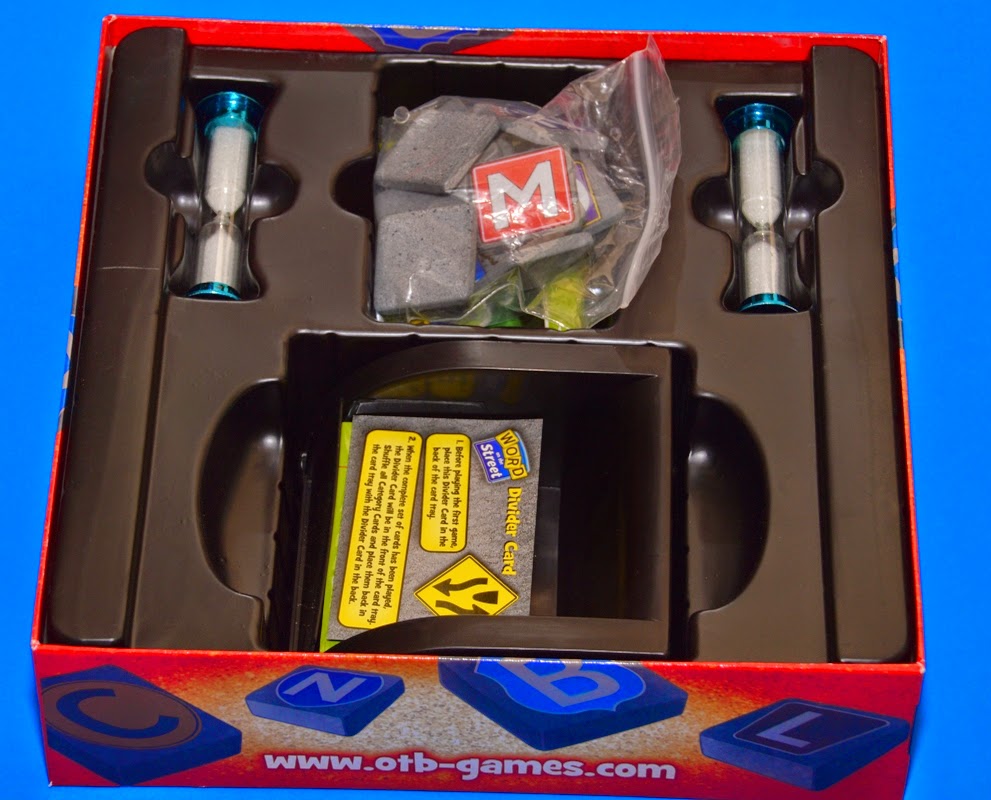 Each team will take up one side of this board, in which letter tiles are placed. 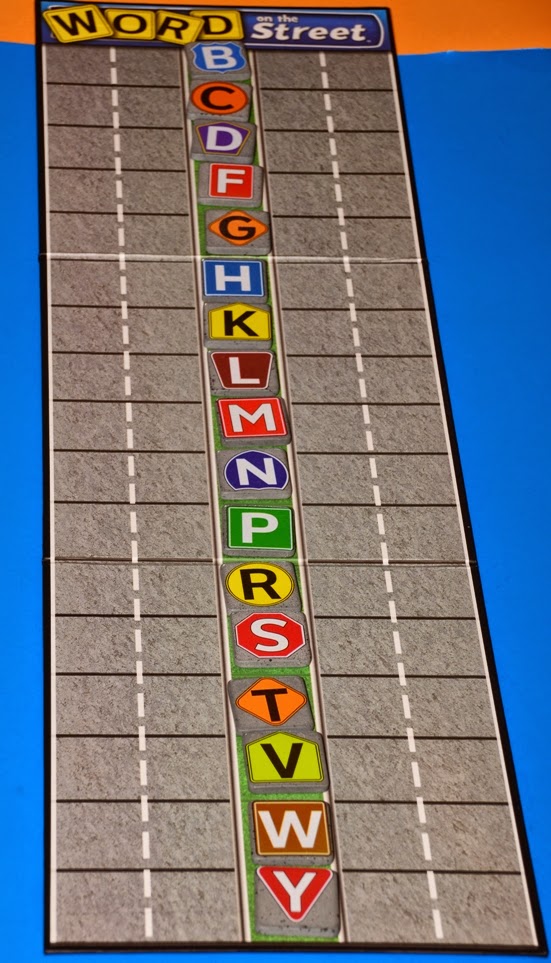 Someone draws a card. We will draw a green card first, as it represents a supposedly easier topic.

As soon as the card is flipped, the 30-second timer is flipped too. 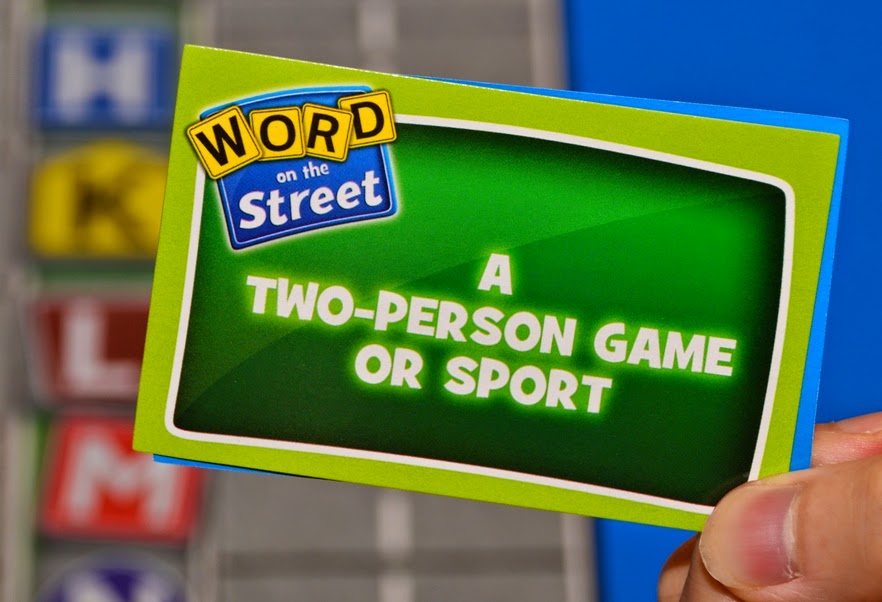 So the team must decide a word that fits that category. For example Chess and Tennis would be suitable words but Table Tennis is not allowed as we are only after single words.

There are some other grammar rules that I won't go into (especially ones that revolve around plural words).

But here, let's do Badminton. Letters must be moved ONE at a time and SPELLED OUT LOUD.

While this is happening the other team are allowed to distract you. 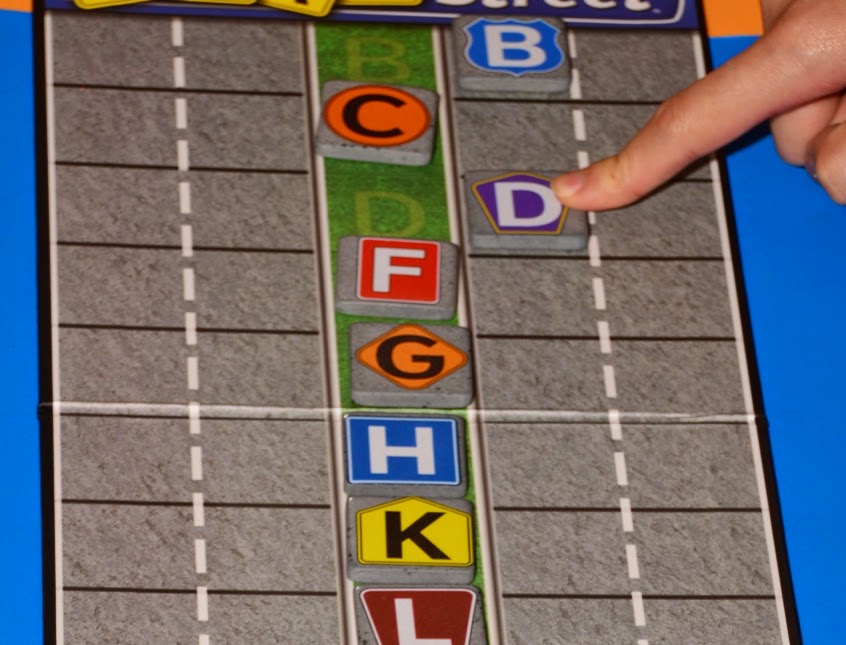 The team on the right starts by moving B and then D, spelling out the word one letter at a time:

And then they continue along the path....

Thus the final product is as above, with the N moved twice to the right side.

All of this must be done before the 30-second timer runs out.


Then the other team gets their turn. We'll pick a harder topic (the blue cards) this time. [You wouldn't do this in the real game, as at the start you pick either the green or blue cards - unless you want to even the odds if one team is stronger than the other] 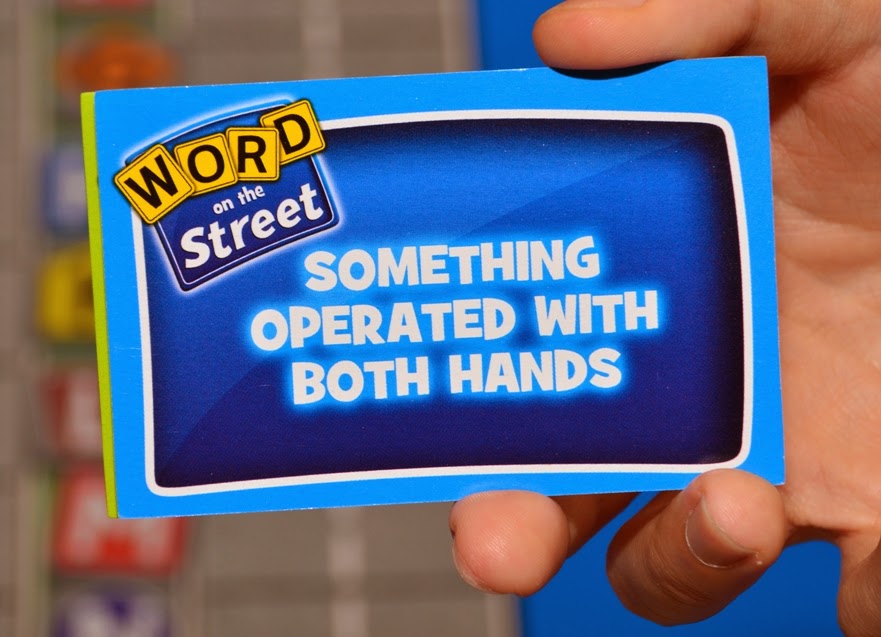 The left team opt for MOTORCYCLE and move the letters accordingly. Importantly, the T is moved back to the middle, negating the one-tile pull by the right team.

You can see how this becomes a tug of war. The selection of Motorcycle, while decent, is not necessarily great because it fails to drag back the N, B or D - but sometimes it is better for your team to focus on particular letters rather than getting caught up with trying to stop the other team.

Suppose the team spells motorcycle wrong. Let's say they spell it as MOTT.....

At any time, the other team may challenge a team's spelling of a word. If it is wrong, the team that spelt it wrong does not get to win the letters from when the spelling error occurred and onwards (in other words you only get all tiles moved before the error occurred).

Hence the team would only get the M moving up one tile to the left, back to the middle (as BADMINTON moved M once to the right).

And the T would be moved back once (not twice, because one of the T's is correct) because it was spelt wrong: 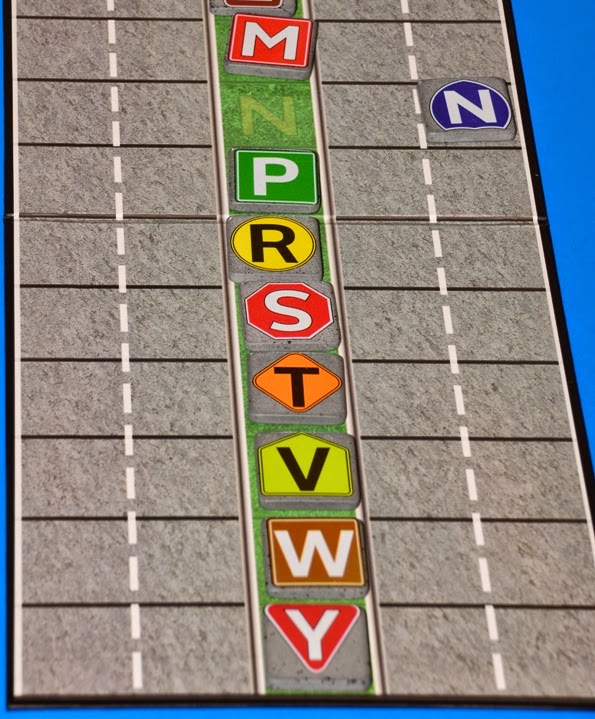 Your team can challenge a word selection, rather than spelling, if you feel it does not meet a topic.

After arguments are heard, a majority of players from the WHOLE group (both teams) must decide whether the word is allowed or not. This, in practice, doesn't really work. You may need a third umpire to get a fair decision.

If you can somehow get the majority of players to agree that a word is not acceptable, the whole word is disallowed!! If there is a tie, the letters are set back to what they were before the word was spelt out, and a new card is selected.

First team to capture 8 letters to their side of the street wins.