Today my tribute is for you.

Roy is something of an unusual friend. How so? Well, I should explain by asking this question:

What kind of friend would literally drop everything and dedicate one-quarter of his weekend, consistently week after week, to help another friend's cause?

Well, as you would have guessed, the very kind of friend that Roy is.

Last year in December, when I asked Roy if he could help me to learn Chinese, I certainly was not expecting an all-out effort on his part. Although we've only recently started, Roy has consistently made himself available to teach me basic Mandarin, with no questions asked. Being the traditional Chinese that he is, he continually refuses to let me pay him back or buy him lunch. Furthermore, when I asked him if he could help me to search for some textbooks I was after - the New Practical Chinese Reader textbooks - he immediately got his friend in China to buy them for me.

Certainly the lengths Roy goes to to demonstrate his friendship is exemplary. Indeed, Roy has taught me an important lesson, one that I have been told many times but have never really put into action: We must not always keep taking. We ought to give in return.

Roy lives his life by this philosophy.

Roy is also a hard-working individual who strives for excellence. When one considers that Roy is from mainland China, it becomes manifestly clear that his English skills are somewhat accomplished. He continually toils and labours on his English and always seeks to improve. He has, in fact, improved A LOT - not an easy feat at all given how difficult it is for foreigners (especially East, West and South-east Asians) to deviate from their mother tongue.

Another strong feature of Roy is that he is a polite, courteous and well-mannered individual. He respects elders and values his friends as well. I can easily foresee that he will make a good family man one day--- although, of course, he is currently a very good one at that to his very proud mother. 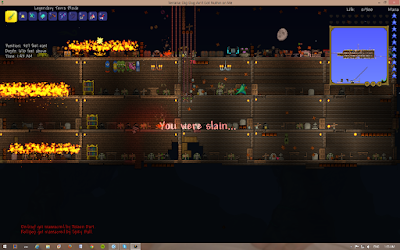 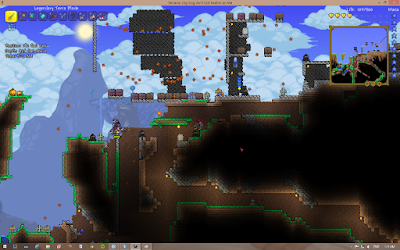 Last but not least, Roy is also quite the accomplished video-gamer. I remember sharing a few good nights playing Terraria with him. Roy was always leaps and bounds ahead of me: developing his character at a faster rate than mine and producing crazy levels of armour and weapons (Kevin Ngo and Diana Liu can attest to this fact).

One might be quick to dismiss this skill on the basis that is 'not relevant to real life' (because 'it's only a game') but what I will say in my defence is that Terraria is well-known for its not-so-straightforward crafting recipes and challenging character development. Thus any skill in this area, in my view, is reflective of a person's intelligence and persistence in real life. And Roy has plenty.

Since a picture speaks a thousand words, I shall post two pictures here and leave it to the reader to visualise the 2000 words I could have used now to explain the remarkable adventures Roy and I had in that strange place called Terraria, with me running behind him and Roy leading the way...