This is what the table currently looks like, thanks to Wikipedia. 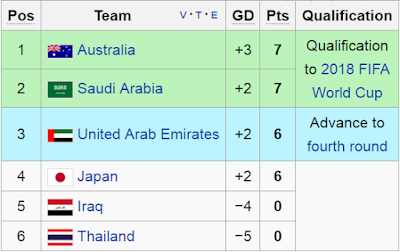 Japan take on Australia in Melbourne while the UAE travel to Jeddah to give the Saudis 2 consecutive home matches.

A lot of chaos could enfold here. I take a look at all the bad things that could happen if Australia is not careful...


Scenario 1 - Two leaders ahead of the pack

One bad scenario for Australia could look something like this: 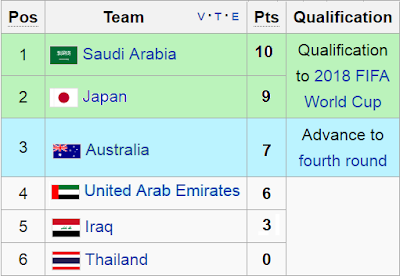 Arguably one worst case scenario would be if the Saudis drew with the UAE and the Blue Samurai gave Australia a hammering. That would create a situation like this: 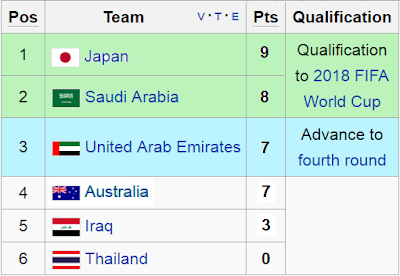 But probably the worst case scenario would be if UAE and Japan won, in a manner that would leave Australia trailing in 4th. 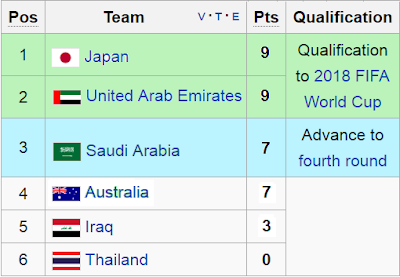 Why is Scenario 3 the worst case scenario? It depends on your view of things.

Having 3 rivals in the mix for the top 3, while you are 4th, is arguably the worst scenario because it increases the possibility that you could miss out totally for any qualification, including missing out on the third place playoff (which of course acts as a "second chance" and leads to a play-off against the 4th placed team in CONCACAF).

On the other hand, if Japan and Saudi Arabia get a big headstart for the race in the top 2 as depicted in the Scenario 1, at least there is a minor lead for the Socceroos over the UAE in the race for third.

Of course, champion teams don't talk about this nonsense and they just go out to try to win every match ---- unless of course a special mathematical situation requires a cool head and a specific set of results.

Either way, it should be interesting.

I'd predict a victory for Australia and Saudi Arabia, but imagine if I was wrong for both matches!!