Time: 85 minutes plus 18 minutes worth of bonus content which includes an interview with John Williams.

Price: The Blu-ray is about $35 in total including shipping.

Cadenza and Variations from Fiddler on the Roof feat. Itzhak Perlman

Escapades from Catch Me If You Can (Closing In; Reflections; Joy Ride) feat Dan Higgins, Glenn Paulson and Michael Valerio

"Dry your tears, Africa" from Amistad

Imperial March from the Empire Strikes Back (Conducted by John Williams)


Short Comments: This DVD features some awesome live video footage of the orchestra doing their thing for each of the above listed tracks. It appears that the footage was taken in or around September 2014. Artwork and storyboards (where applicable) relating to each track are interposed on screen occasionally. This can be annoying, but they don't interrupt the visual footage too much.

I must say at the outset that it's a real shame that some of the more legendary scores like Raiders March or the Jurassic Park Theme are not included in this disc; however the other tracks featured here are solid enough.

Olympic Fanfare is nice (I recall hearing this from Salt Lake City 2002); Soundings could have been left out, really, in favour of a more well-known theme but is interesting nonetheless. The themes from Schindler's List are moving, as are the variations from Fiddler on the Roof in a different sense. Apparently the latter was included because it was Williams' first Academy Award.

Catch Me If You Can is another questionable choice, but is still pleasant to listen to. 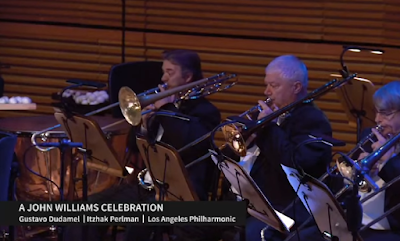 The best part of the disc definitely starts from Throne Room and Finale from Star Wars onwards. It obviously would have been a cardinal sin to leave Star Wars out.

Dry your tears, Africa is very touching and features a junior choir. I really liked this one.

The excerpt from Jaws is rather brief.

Arguably the best part of the Blu-ray is seeing John Williams himself in action. He is invited by Dudamel to conduct and does so with amazing vigour and spirit - it is incredible stuff.

Score: 7 to 8 out of 10. A good watch but could have been much better had there been more popular tracks included. Still worth buying though, especially for the Star Wars bit. It's arguably on the expensive side though given the lack of content.