"What if...no one could see the cards in their hand?" 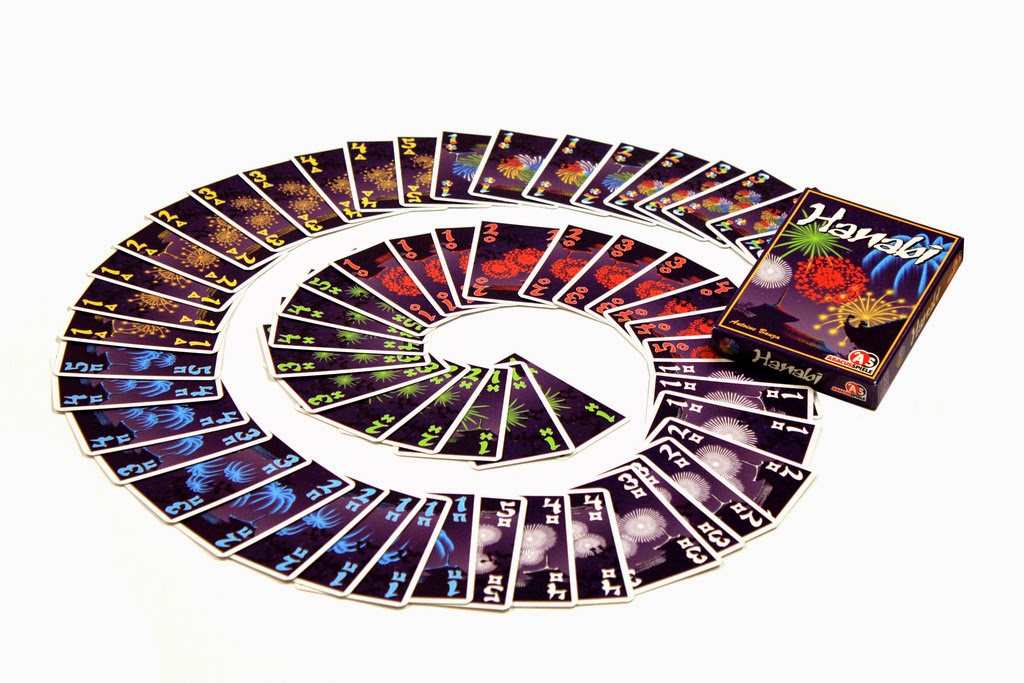 Time to play: About 30 minutes.

Hanabi is a game where no one can see their own cards. Ever. Doesn't that sound a bit ridiculous?

However, what is interesting is that each person can look at everyone else's cards. Now you might ask: What is the utility of that?

Well, the whole group has to collectively work together to construct a series of cards in a solitaire-style fashion (numbers 1 to 5, for 5 colours - see the below Rules). On their turn, a player can give a clue, play a card, or discard a card (to obtain a clue back).

The game is a very interesting and amusing experience to all players of all interests and levels. It involves considerable cooperation and teamwork. It's one of the first games I think of when introducing a game to a group of friends who have never played card/board/party games before.

The only downside of the game is that, if the rules are not enforced strictly (in the sense that people give clues they shouldn't really be giving - see the Rules section for more info), this can spoil the game for 'hardcore' gamers. This might include giving subtle hints (and clues within clues such as variation in voice or tone).

However, in any case, I think that this aspect of the game makes the game quite fun and entertaining, not to mention that it can't really be avoided when playing with a group of casual gamers in a social context.

I do like this game but I wouldn't play it all the time - it would depend on the group I play it with.

*19/7/14: The uniqueness of this game, coupled with its cooperative team element, means it really ought to deserve a higher score than the 6.9 I originally gave it. It may not always be something I want to replay, but it is a good game concept to introduce to your friends!

No one is allowed to look at their cards so they must hold them facing AWAY from their eyes line of sight like so:

(In other words, you must only look at the backs of your cards)

The group also has a stockpile of 9 Clue Tokens (the scroll icons) and 3 Life Tokens (the lightning icons) like so:

The aim of the game is to, as a team (it's a group effort - everyone helps everyone else), sequentially place cards in ascending order for each of the 5 Colours available.

For example, let's look at this game that has been partially played.

The group has placed down the numbers 1 to 4 of White, 1 to 2 of Yellow and the 1's of Green and Red. There are no Blue cards played yet.

Right now, a Green 3 would be an invalid play but a Green 2 would fit the Green column. A Blue 1 is also a valid play, as it would start a new column.

This will become clearer as you read the rest of these rules. 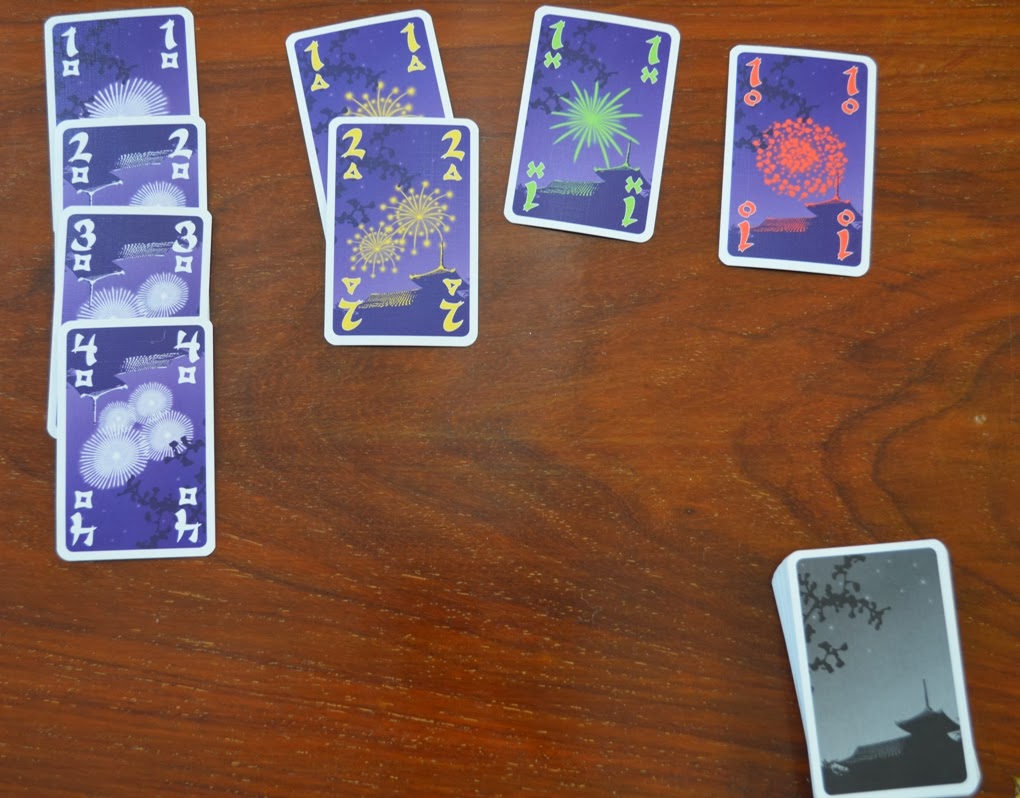 On your turn you can choose ONLY 1 of 3 actions as below:

Note that if you Play or Discard a card, you always draw a card to refill your hand.
(But don't forget: you aren't allowed to look at your cards)

This is a main feature of gameplay.

On your turn you can tell other people what they have in their hand.

But you must follow certain rules. You can only give a hint about the COLOUR OR the NUMBER of a card. You must name ALL cards that share that feature.

For example, going back to this picture:

If I am the middle player, I can give the Left Player this clue:

Or, alternatively, I could give the Left Player this clue:

If I did one of the above clues (but not both on the same turn - you can only give one clue at a time), I remove a clue token from the box (or you can flip it over to its dark side, it doesn't matter) to symbolise that a clue has been used like so: 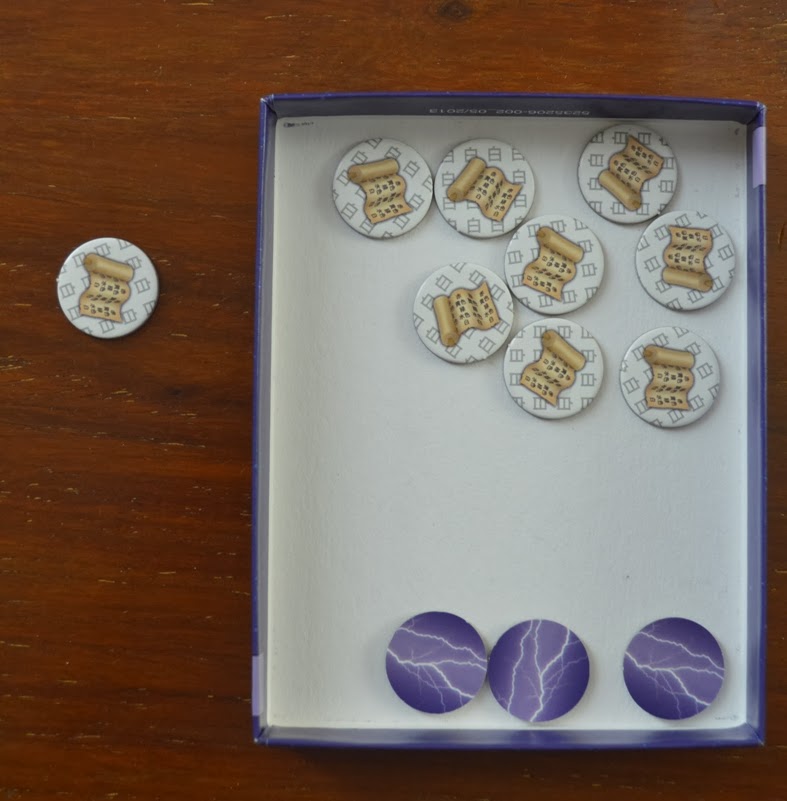 Players may adjust their cards to help them remember clues (eg. move a card to the left side)

A note on "Cheating"

What I call "Cheating" occurs when you give dodgy clues such as "You have two Green cards: here (in a soft voice) and HERE (in a loud voice)"

Since the emphasis is on the second card pointed to, it hints to the receiver of the clue that that card is particularly important and should be played now.

There are a few variants to how to do this but I won't go into detail about them. Note that this can backfire because sometimes the receiver of the clue might think that they are meant to discard, rather than play, the card (which has happened in a game I played)

It's up to the group as to how strictly they want to play the game! (ie. no emotions, no faces, no emphasis etc)

When you play a card, it MUST fit into one of the 5 columns.
Note that, you DON'T need to say which column it fits into - it just has to fit.

So continuing the example, if it's the Right Player's turn (and they knew that their second card in their hand was a White 5 after being given several clues), the Right Player could then choose to play their White 5 card down as follows: 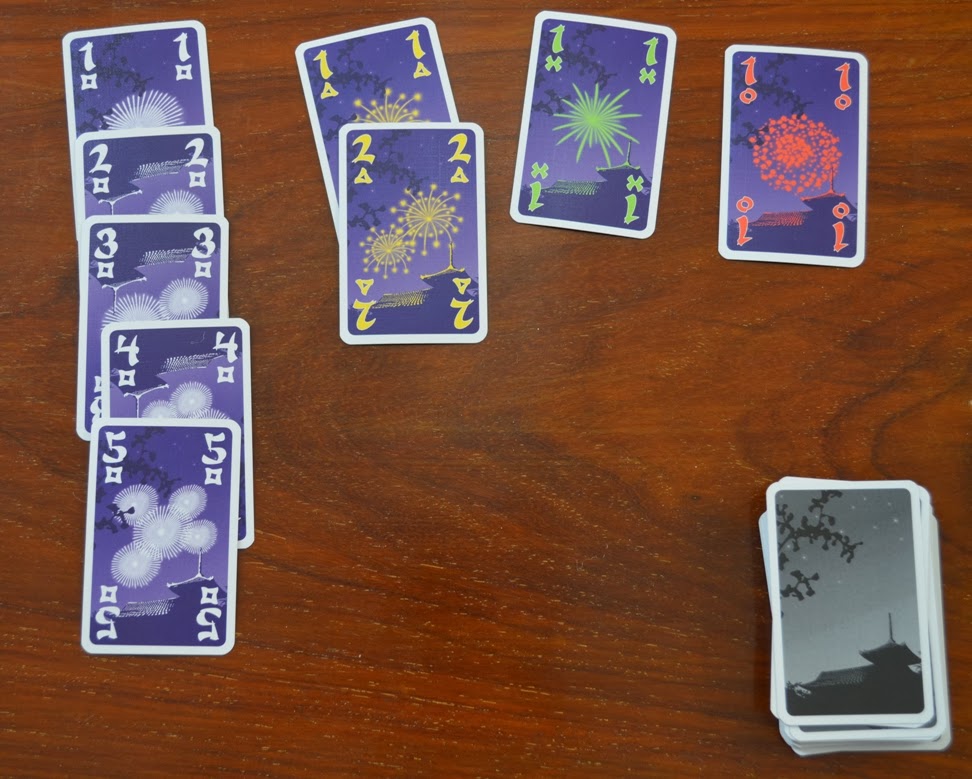 (As another example, the Left Player could play down their Blue 1 and it would create a new column of cards - you could put the Blue cards next to the Red 1)

If you play the wrong card the whole team loses a life.

"Wrong" means that the card has already been played OR the card does not sequentially match any of the columns.

For example, if it's the Left Player's turn and they played the White 1 in their hand like so.. 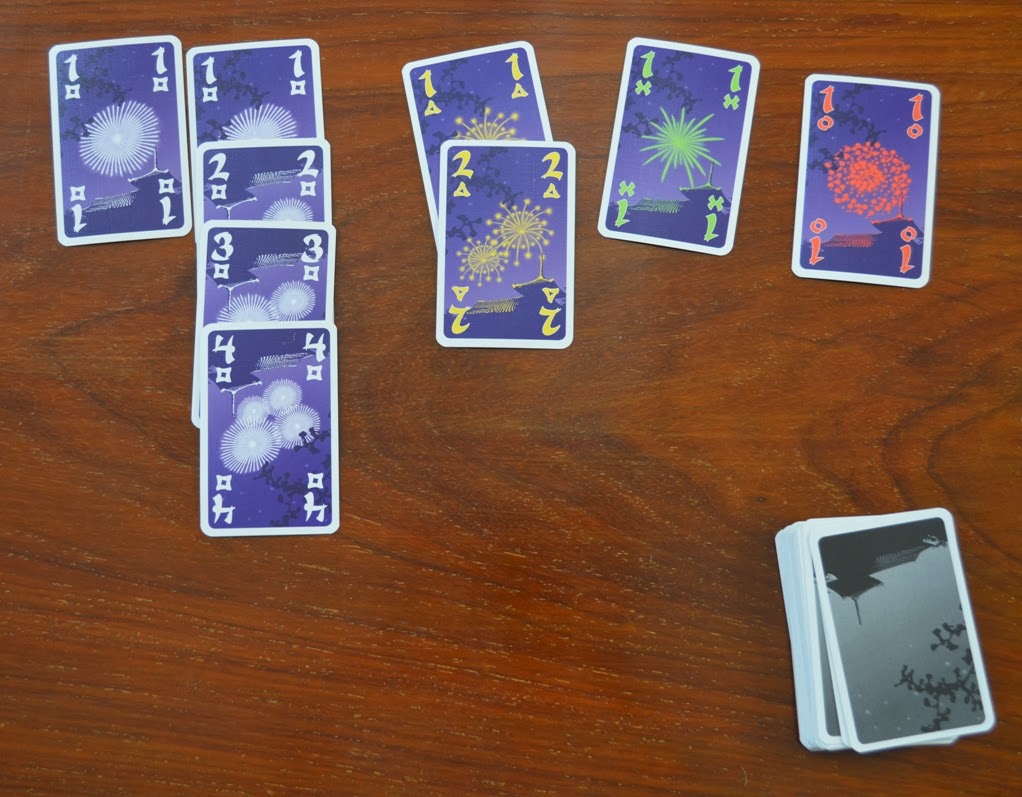 ...then the whole team loses a life, symbollised like so (or again, flipping the coin over to its dark side): 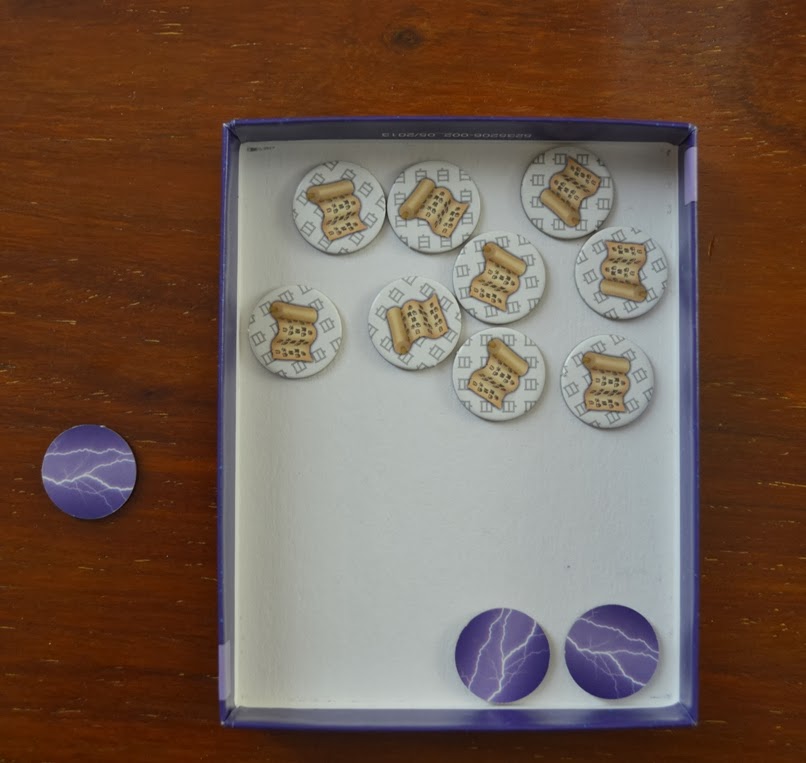 However this is not as easy as it sounds because there are, in total:


Hence you have to be careful not to discard a 5 as there is ONLY ONE 5 of that colour in the game.

If you discard all the numbers for that one colour, you will be unable to complete that colour's column.

(So for example, if you discarded the two 3's of the Green colour, you won't be able to finish Green - the furthest you could reach would be 1 and 2 in Green)


Scoring and end of the game


Then count your score and measure it against the scoring chart (which has different ratings for diferent scores).


Counting scores is simple - just add up the highest number of each colour column. Hence the maximum score s 25.

You can make the game harder by: 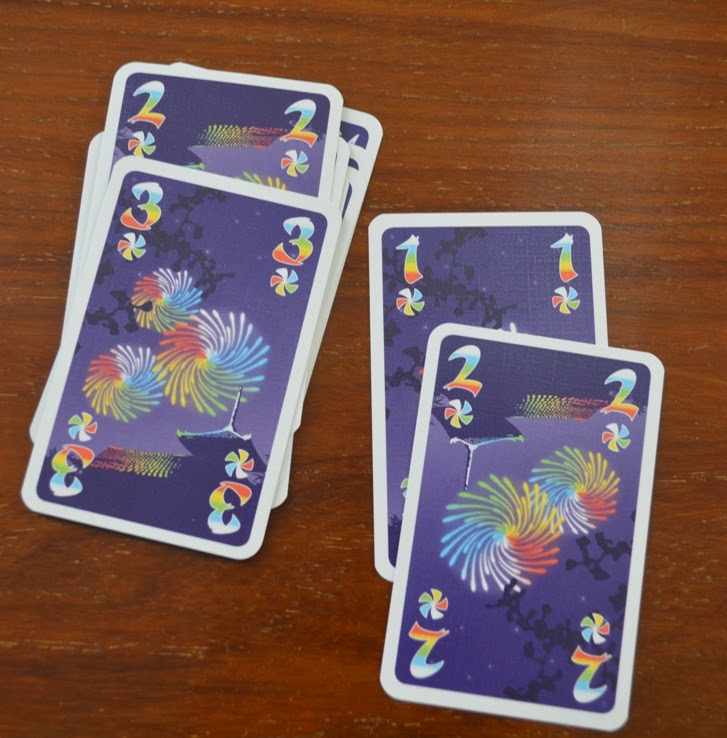 The game becomes harder because, when you give a clue about COLOUR, the multi-coloured card must ALWAYS be named IN ADDITION to the other cards named.

However, you can choose to identify a multi-coloured card as a colour in itself (because the Multi-Colour is a treated as a new Colour and has its own column like all the other colours)

So you could say "You have 1 Multi-coloured card here".