(The name is in fact quite misleading - With some small exceptions, it's almost nothing like Blokus) 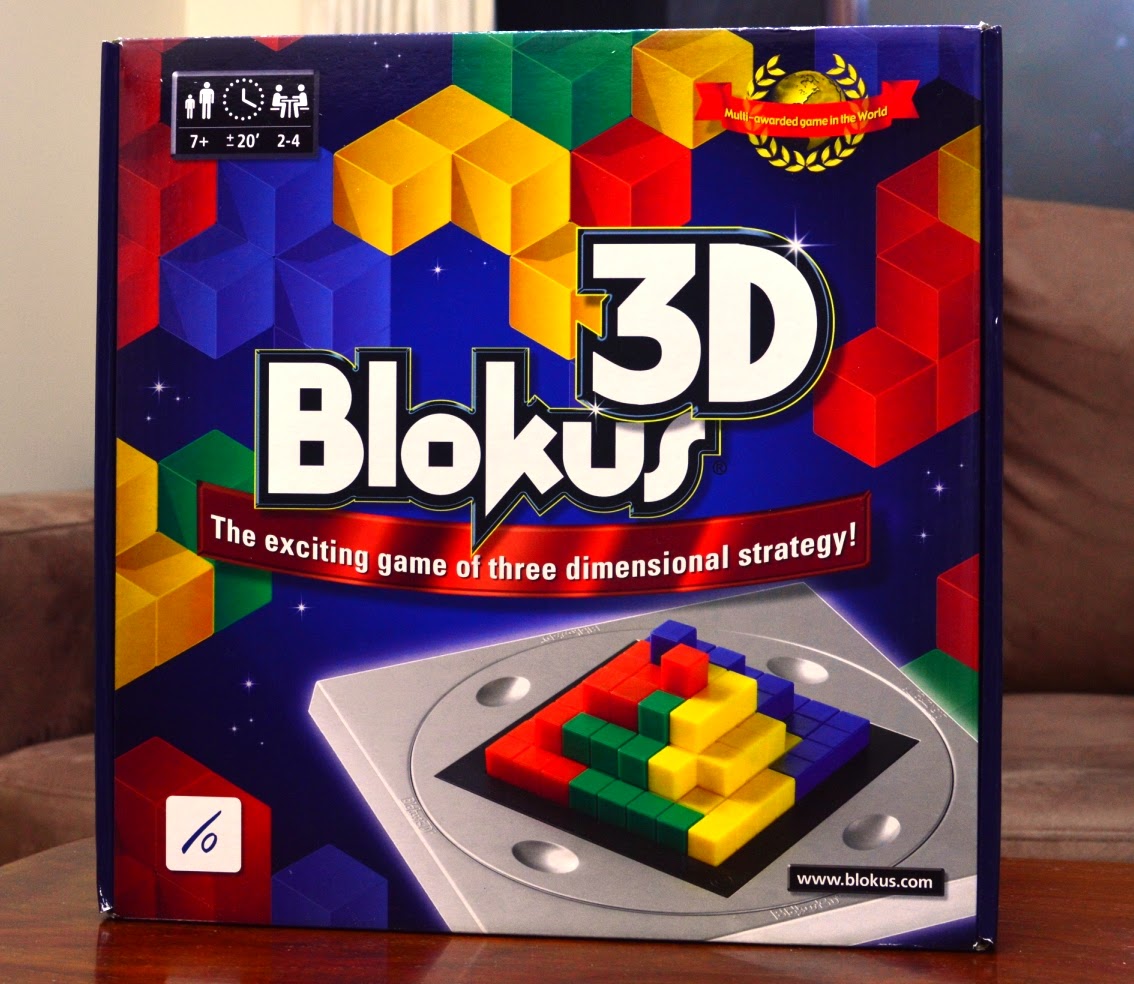 Publisher: Quite a few exist, but mine (the Australian version) is called 'Divisible by Zero'

Editions: Rumis was the name given to it when it was first released. Though I am not sure, I gather that gameplay is exactly the same in Rumis but with different components and South American themes.

The story goes that apparently Mattel saw the potential to reap massive profits so they bought Rumis and renamed it "Blokus 3D".

Age: 7+ (apparently - I can never tell how they know this)

Price Range (AUD): I'm not too sure to be honest. I bought mine for $57.90 including shipping. Currently Amazon is selling new copies for $99 (I'm assuming this is in USD and it's presumably without shipping included). So it's fairly costly.

Availability: Quite hard to find from my experience - I had to order this via eBay.

Fundamentally speaking, Blokus 3D is a game that I think is a whole lot more interesting than normal Blokus. However the comparison is a bit strange.

In Blokus, players place pieces corner-to-corner on a flat board. In Blokus 3D, players place pieces surface-to-surface and stack them upwards - whoever has the most number of faces visible from a birds eye point of view wins (less the number of pieces left in their hand). Hence, whilst spatial awareness is a similarity between the two games, the nature of the games is quite different.

There is still a whole lot of strategy, but perhaps on a different scale. In Blokus the gameboard is considerably bigger I suppose, and Blokus 3D feels a lot more cramped - but perhaps deliberately so as we are dealing with length width and height. Hence, the strategy in the latter may feel more restrictive (in the sense that there appears to be less options for you to place your blocks) but that does not necessarily reduce the challenge or difficulty.

On the whole I think this makes for a great family game, though it may be perceived to be a childish game by some. Like almost every game, Blokus 3d may also prove to be repetitive if played too many times - but this shouldn't be a problem if you like abstract games.

It would have been nice if more template designs and blocks for an additional 1-2 players were available. (Though I note that Rumis has the expansion Rumis+ - though I doubt whether the expansion is compatible with this game)

* July and September 2014: I revised this score down from 7.5 to 6.9, not because the game itself is flawed, but because it just doesn't feel right giving this a higher score than games such as Carcassonne or Hanabi which are both quite unique in their own respective senses. Furthermore, whilst Blokus 3D is certainly a good game for its genre I don't think every single person will be wanting to replay this over and over again. Part of the reason for this is that, at least on my view, I would argue that it's more likely that the mathematically or geometrically gifted (relatively speaking of course) will properly appreciate the strategy in this game. I'm certainly not one of them - I just play randomly. For those interested in abstract games, or those who are kids, opinions proffered will be quite different. Of course it's still fun to just randomly place pieces all over the park.

Speaking the obvious, I think people will be attracted to the fact that this game is a "3D game" and allows players to exploit the airspace by stacking their blocks vertically upwards. There is considerable spatial strategy involved as well - but that being said, the strategy is far from overwhelming and will appeal to all ages and everyone who enjoys puzzle/abstract-based games.

(Like all abstract games, it's more a case of experienced players discovering subtleties in strategy, rather than the strategy being overtly dominating and off-putting to newcomers)

The aim of the game is two fold:

The game "ends" when no one can put down anything further.

Your score in Aim 1 will be subtracted from the number of pieces you have left.

Example: So if, at the end of the game, you have 15 squares in your colour from a bird's eye biew, but you have 1 "four-block" and 2 "three-blocks" left then your final score is 15- 3 = 12 (hence the size of the pieces doesn't matter. Look at the end of this section for a better example.)

This game is best taught by example. I will simulate a 3 player game.

Everyone agrees on a template - there are a few here to choose from (such as the pyramid and steps template - in these special ones each row has certain height restrictions).

Here I've selected the easiest template - the rectangle. Here, for a 3 player game, the height restriction is 6 units upwards. This is stated on the template itself.

The person who goes first must place their piece next to the border of the template, as shown above by Green.

Then, for the FIRST TURN only players after the first player must place their pieces in a manner such that they TOUCH the SURFACE (not the corner) of the first player's piece, so long as they don't exceed the height limit.

Here are Red, and Blue's next turns:

Second Moves and beyond

THEN AFTER EVERYONE HAS HAD THEIR FIRST MOVE, from now on everyone must place a piece in such a way that the surfaces of their newly-placed blocks touch a surface of their own colour.

Hence, Green's next block must touch a Green surface like so. Green chooses to do this with a square 4-block which is placed to touch the surface of the protruding green block:

So for their second moves: 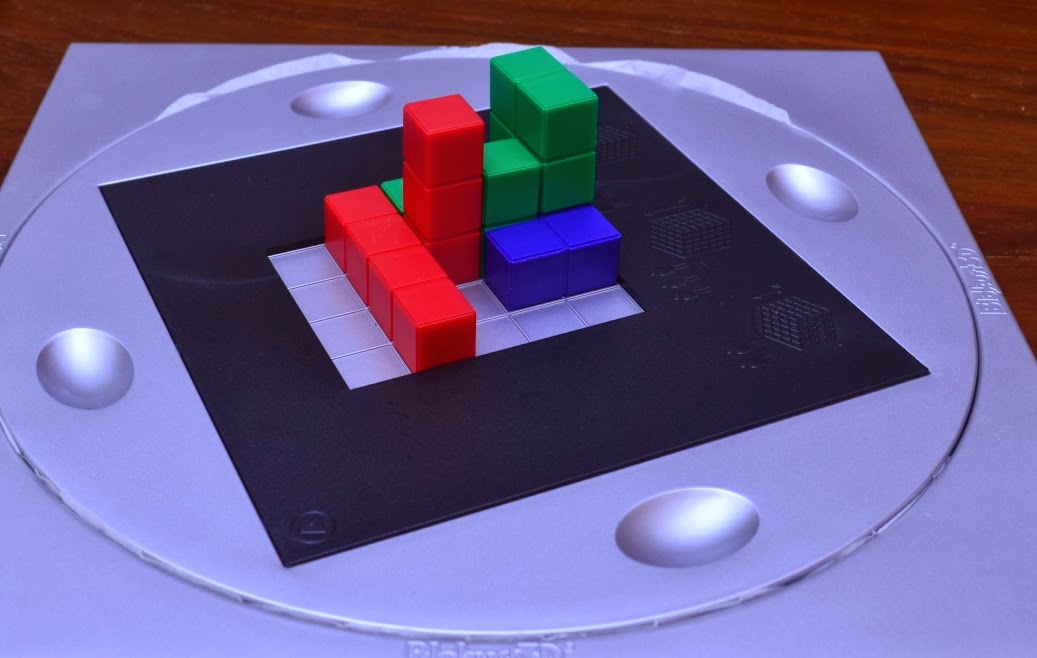 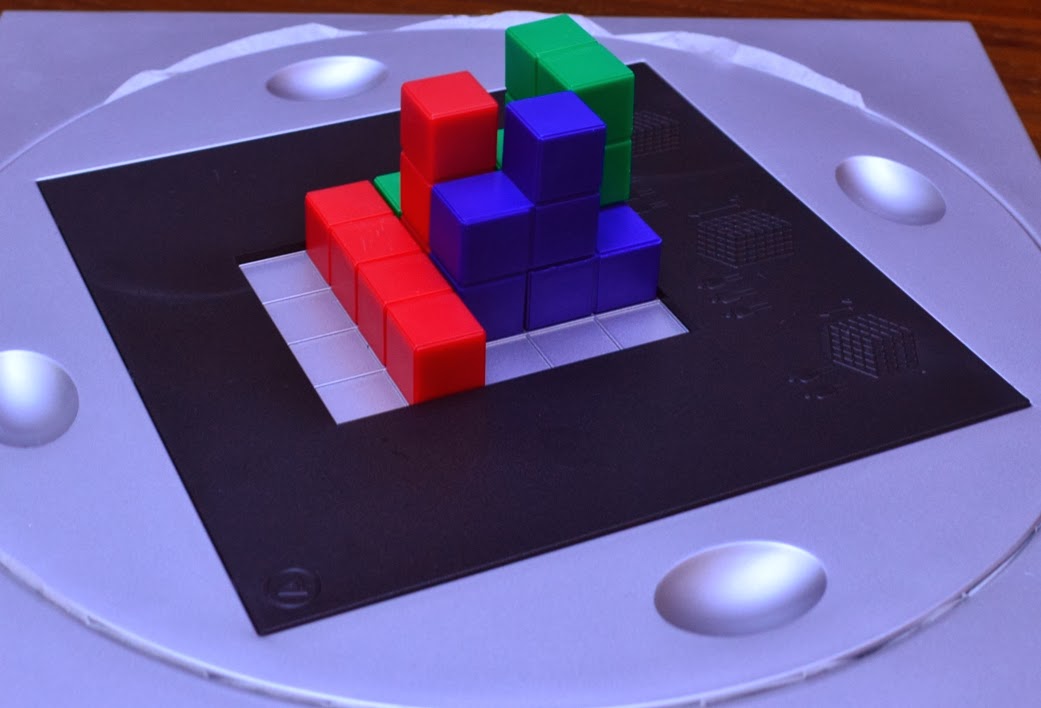 If we skip to a few turns later... 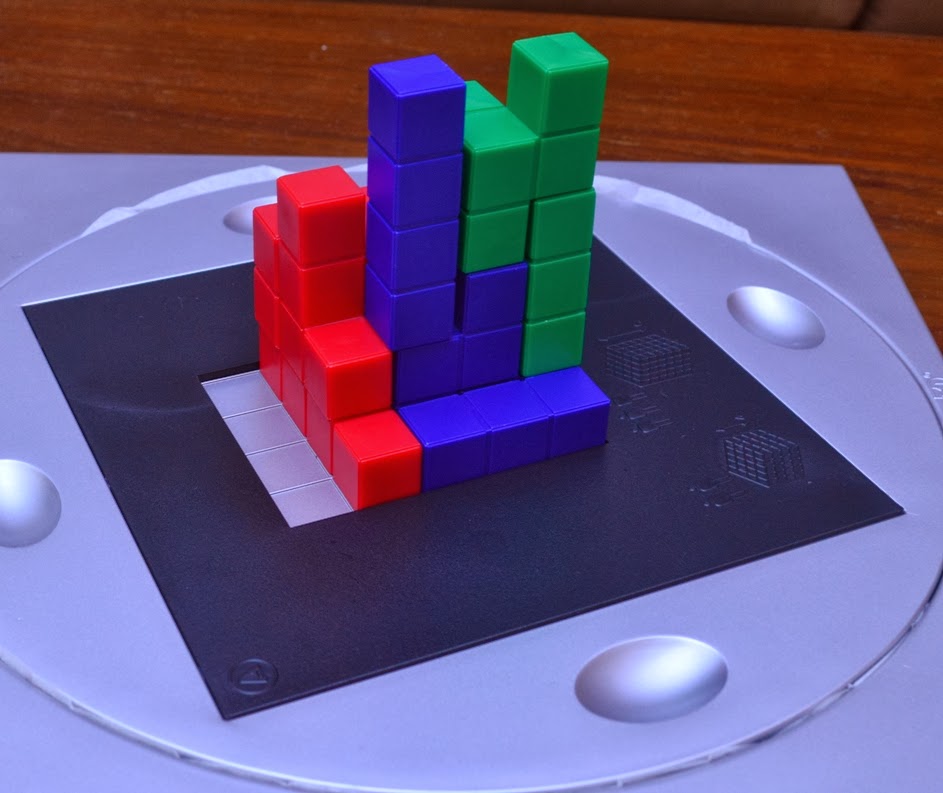 You can see that the height limit has been reached for Green and Blue who have stacked up to 6 units. They can continue stacking each column up to that height, but may not exceed 6 units for any given column. 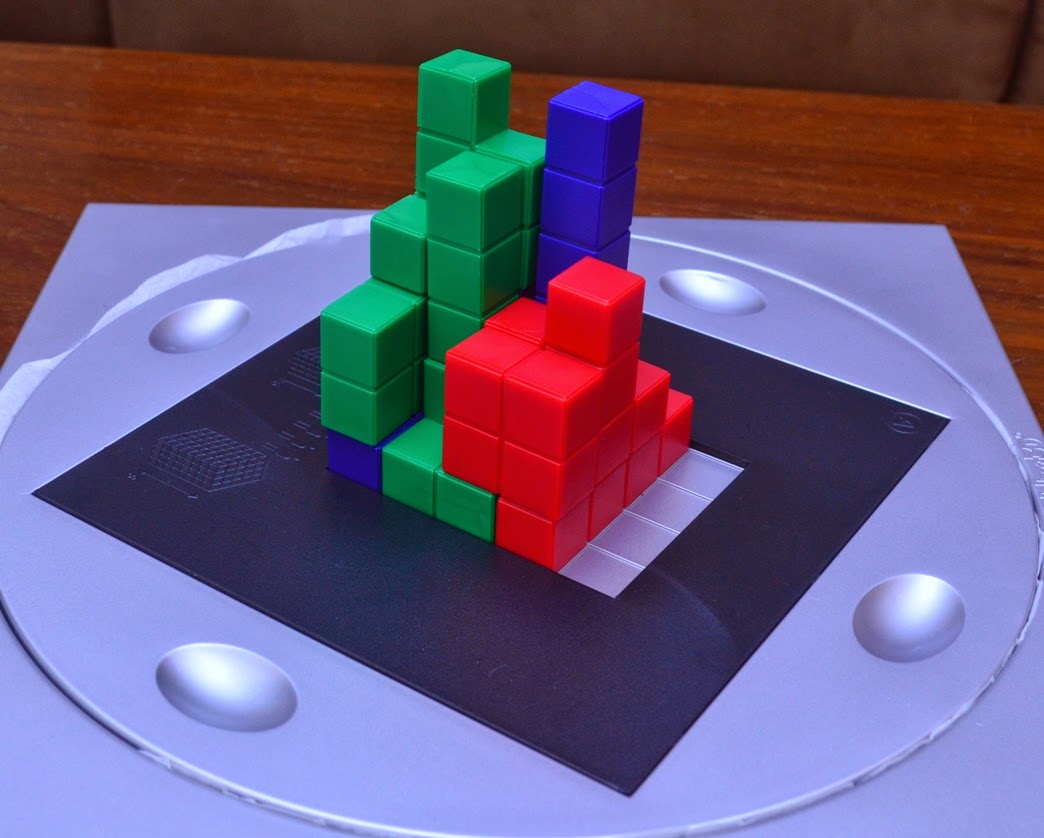 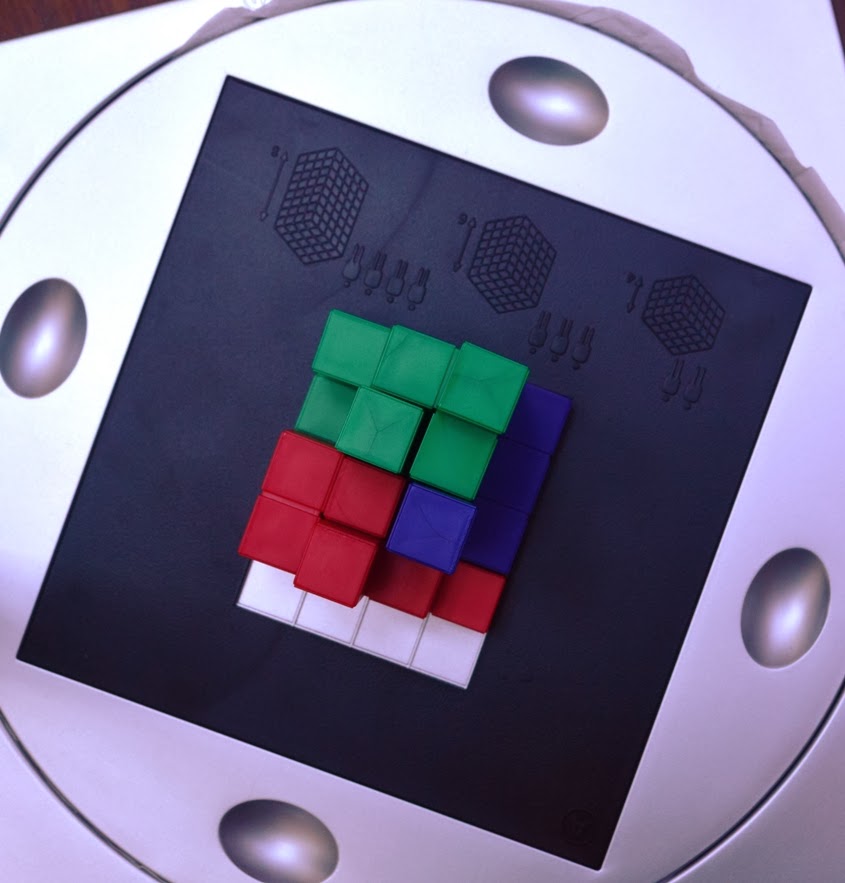 At the end of the game, you count the score by taking a bird's eye view. So assuming the game ends here (which it won't - there's still plenty of space - this is just an example), Green and Red would be tied on 6 points, less the number of respective pieces they have remaining.