It's popular amongst kids, especially in the UK. For adults, it probably suits as more of a collector's item rather than as a game.

It is the simplest game you will ever encounter, and chances are you already know how to play it. The emphasis is on theme; whilst enjoyment factor purely hinges on your appreciation, knowledge and how much you are a fan of that particular theme.

My sister refuses to even call it a game - and that's completely understandable. 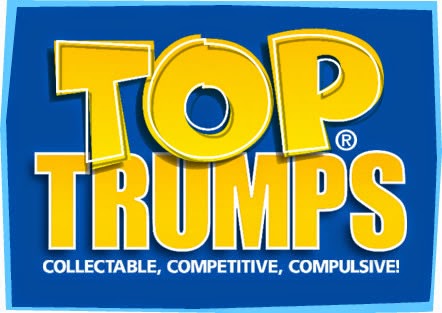 Versions/Themes: There are HEAPS of versions. Almost as many versions to choose from as there are topics under the sun (of course, this is a bit of an exaggeration). Here are only a handful of examples:

Lord of the Rings (see below); Harry Potter; Star Wars;
World Football Stars 2013/14
DC Universe: Heroes and Villains
Disney Pixar
The Simpsons Classic Collection (Earlier volumes are dearer because they are rarer)
Plop Trumps (A spin-off, based on animal poo - kind of cool, but may yuck people out - see below picture of tin)

There's even a Royal Wedding Special as below

Original Game Designer: "None" really - the concept is as old as card games itself.

Players: As many as you want but doesn't play that well with lots of people.

Time to play: Very fast - can be as little as less than 10 minutes?

Price Range (AUD): $10-$40+, depending on how rare the set is you are after and whether you are paying shipping.

Availability:  Quite widely available online. A very limited range is offered in the ABC Shop at the time of writing (Deadly 60 and Dinosaurs from memory)

5.0+ out of 10. (Barely Passes as a game, but I reserve my judgement on its "fun" factor as that truly depends on where your interests lie and which themed pack you purchase - See my Rating Scale)

"Highest card wins". That's basically all there is to Top Trumps.

However, the fun factor of this game purely hinges on your interests. It is mind blowing to think that there are so many different versions of the game that appeal to different interests. For example, if you like superheroes and supervillains, you will enjoy the Marvel or DC Universe packs which feature your favourite comic book characters.

If you enjoy sport, you might appreciate some of the teams or sport-specific packs, particularly for a certain year (further you go back, the more expensive), available such as these:


Other varieties that I have are below:

Whatever your interest, there probably is a Top Trumps pack available. And that is the beauty of Top Trumps in a nutshell. The packs can be quite cheap if you buy them in-store, but here in Australia the variety isn't that great. Ordering online can be significantly costlier, with shipping adding on 100% to 200% more on price ($10 or $20 dollars more), which is probably not worth it.

I'll explain the rules below but it's simple enough - each of the cards contains statistics unique to a particular theme. A random player calls a statistic out (for example, number of goals scored; strength; temperature; courage). Everyone plays their top card (they don't seem to have a choice, they always play the top card - for example, if using the Man United deck: Player A might play Robin Van Persie; Player B plays Wayne Rooney; Player C plays Antonio Valencia). Then the numbers of that statistic are compared. Usually the highest number wins (so, for number of goals scored for that season, Van Persie would win based on the 2012-13 season).

At the risk of sounding repetitive, Top Trumps' fun factor purely derives from the theme of the cards you purchase. I find that, no matter how childish the gameplay is, if the topic interests everyone it will still be fun for all and stimulate much discussion.

The ability to play a game relating to something that interests you - be it a movie, a sport, a comic book series or some other random topic - generates quite a lot of fun, even if it is mindless fun.

1) Grab a deck of Top-trump cards

2) Distribute the cards as evenly as possible to all players. All players hold their cards face down, or if face up, hidden away from other players.

3) Randomly assign a player to be the starting player

4) Starting player calls out a statistic

5) Everyone takes the top card of their deck (without looking or choosing their card) and reveals their card. Highest number of that statistic usually wins, but occasionally, another victory condition has to be triggered (for example, earlier year)

6) Whoever wins takes all the cards placed down by everyone. (This rule can make the game finish very quickly, especially if a lot of people are playing). These cards get taken by the winner of that round and placed on the back portion of their deck face, hidden away from the view of others.


6a) If there is a tie between two or more players, no one wins anything for that round. Those cards are then placed in the middle. A new round starts with a new statistic being called for a new card of the person who called the previous round. The winner of the next round gets to take all the cards in the middle (from the previous round) and the cards of that current round!

7) Whoever won that round round picks the next card from the top of their deck. They now look at it and get to call out any statistic they like in the next round.

8) Repeat until someone has no cards left. Whoever has the most cards when someone runs out of cards wins.

To increase the fun/strategy/length of the game, perhaps the rules can be altered so that:

a) different people get to call out the statistic?
b) players get to choose which cards they can play?
c) not all cards are given to the winning player, just a few cards?