Pandemic's cousin, with a couple of smart variations.

At a conceptual level, more or less the same thing though. 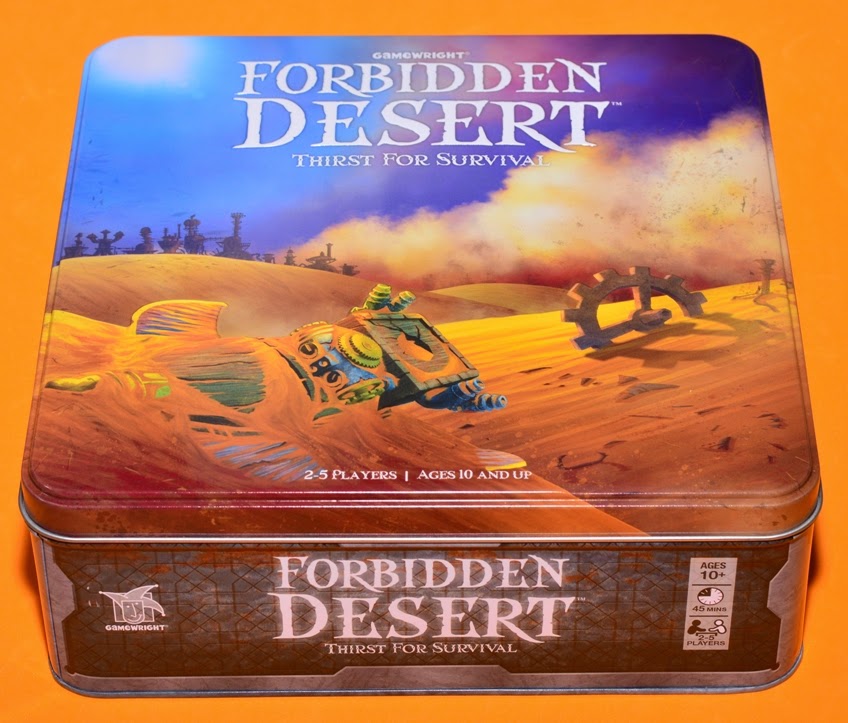 Publisher: Gamewright, amongst others

Time to play: 45 minutes or so

Availability: Quite widely available online and should be in many hobby game stores.

The basic premise here is that your group's plane has just crash landed and you are all stranded in the middle of the desert - to escape you will need to find all 4 pieces to a 'legendary flying machine' scattered throughout the sands before you run out of water.

In summary this is a nice cooperative game to have in one's collection - but the important question is this: Should you buy this game if you already own Pandemic?

I think the answer is a tentative "Yes, maybe, if you are a keen collector; but no if you aren't a huge fan of cooperative games."

To be honest, the only real attraction to Forbidden Desert are its interesting components, the nifty sandstorm mechanic, and the added action of excavating or flipping tiles (much like Forbidden Island, I am told - a game I did not get because I heard it was somewhat similar to and a simplified version of Pandemic).  The sandstorm mechanic is pretty ingenious, in that it causes the whole landscape to change (including tiles that your characters are standing on!) constantly on each turn. This is what makes the game interesting and unpredictable. Apart from what I have mentioned above, it retains essentially the same cooperative flavour as Pandemic, except I would say the latter is a lot more serious in tone, feel and theme. I think I slightly prefer Pandemic over the novelty this game has to offer.

However, I would not rate one more highly than the other - they are mostly the same to me. Again, like most cooperative games, this one also suffers from that problem when playing with lots of people, namely, that it feels like only 1 or 2 dominant people are doing all the talking and everyone else (or at least those too timid or polite to voice their opinions) is just following along. Obviously this isn't true of every game or group, but for that reason, it does tend to make a better 2 to 3 player game.

I enjoy the artwork this game has to offer, particularly with its desert theme and the plane's physical components provided. The downside though is that I feel that this game may be a bit too simplistic or childish in theme to those who are after something more sinister; so perhaps on that basis this is a good game for a relaxed atmosphere or a family occasion. That being said, the game is incredibly difficult and quite hard to win if you don't plan your actions well as a group.

What makes this game fun?
The unpredictable nature of the sandstorm mechanic and a search through the desert for your escape route home makes for a casual (but somewhat enjoyable) cooperative game.

Here's what the inside of the tin box looks like: 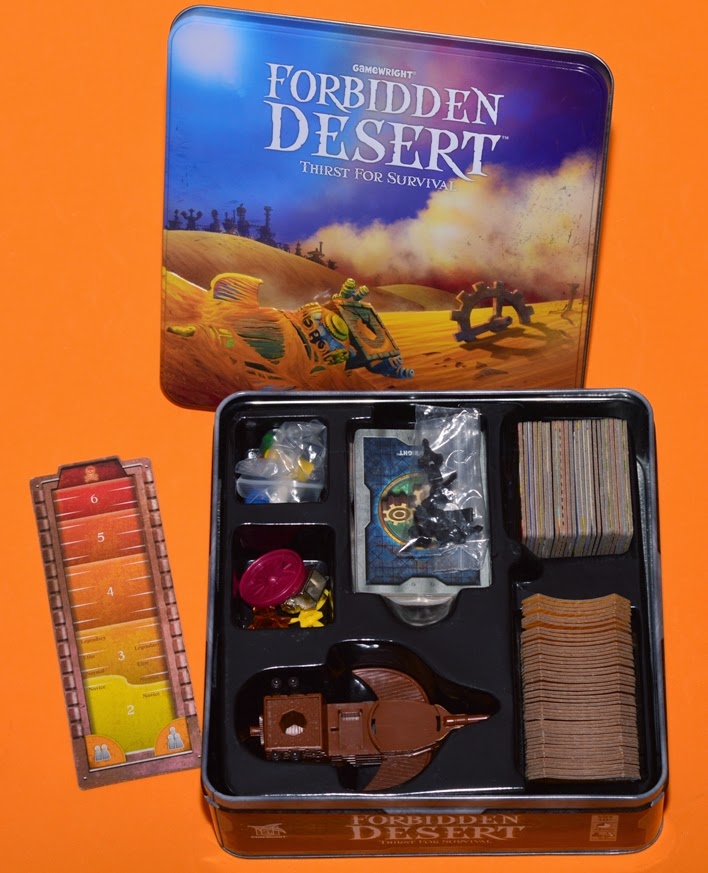 Everyone chooses a character card from these below, or they can be dealt randomly: 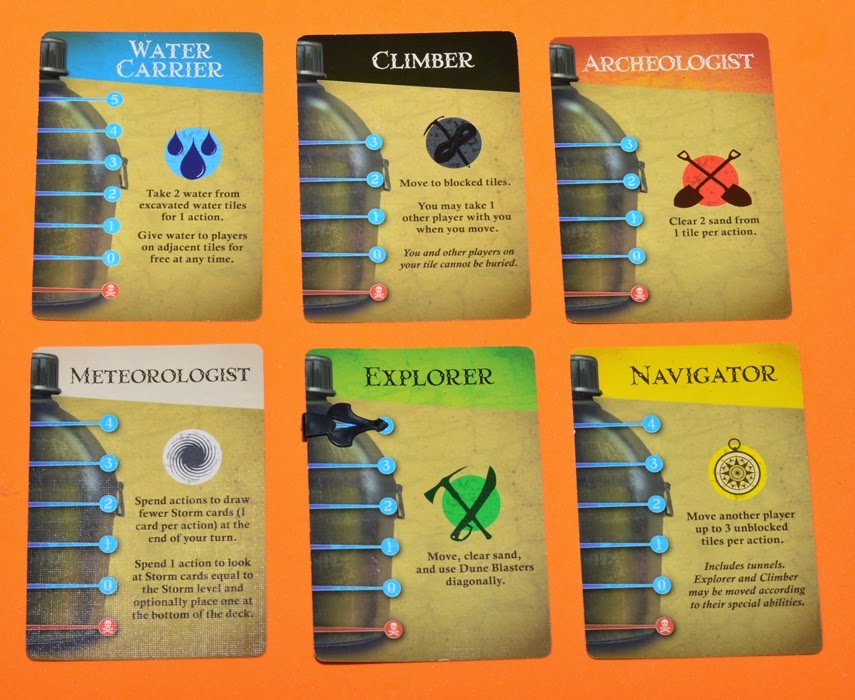 Everyone also receives a clip, which they attach to their card (as seen on the Explorer card above) to indicate their life points (representing water levels). Everyone starts out with their maximum life points.

The Water Carrier, most notably and logically, has the most lives at 6. The arguably more 'powerful' characters (ie the Climber and Archeologist) have only 4 lives.

The Sand Storm meter decides the difficulty level. It changes depending on whether you are playing with 2 to 5 players.

For example, a 3 player game on Elite difficulty would start off like this:

This meter determines how many Red Sand Storm cards (see below) are drawn at the end of a player's turn, which in turn affects how much sand and the number of times in which the tiles are shifted around.

The tiles are set out at random in a 5x5 grid - with a hole in the middle, used to symbolise the eye of a sand storm. 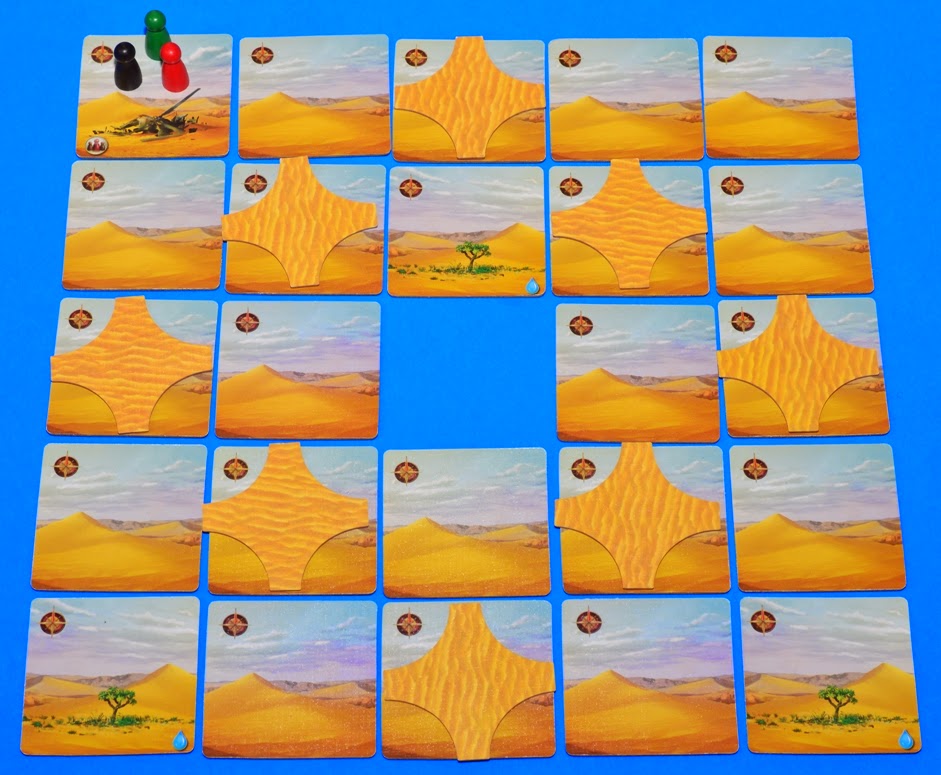 On the bottom left, right and middle are oasis tiles - 2 of which are real oases and 1 is a mirage/fake. These were randomly placed but I am just pointing them out.

The crash site appears on the top left of the board, in which all players' pawns start from.

Two draw decks should be placed on the side; one a Red sand storm draw deck and the other a Blue equipment/gear draw deck. 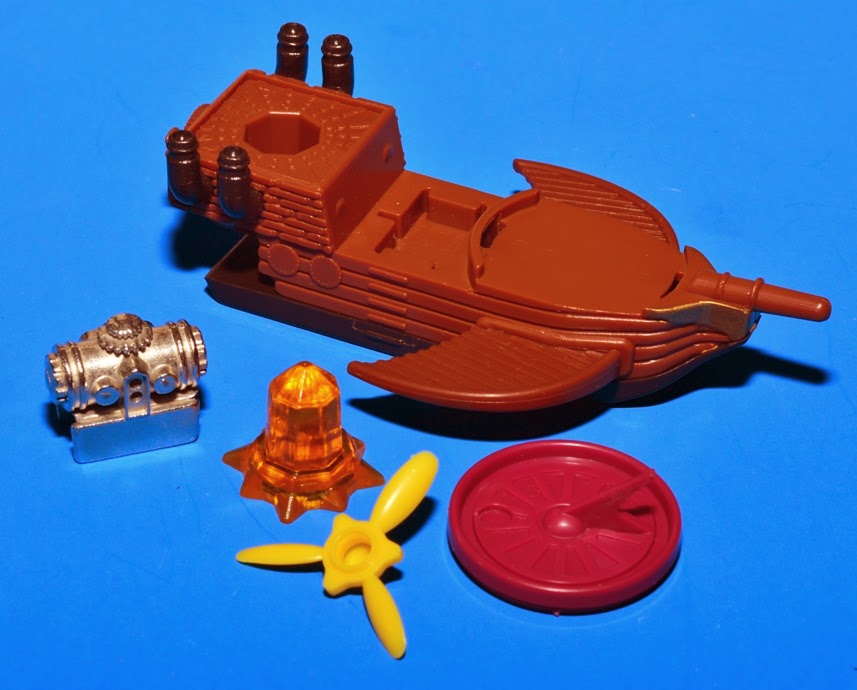 ..are put to one side. I'll deal with this later.

The Blue deck is pretty straightforward. Some tiles, when excavated or flipped over, give you cards with special abilities. 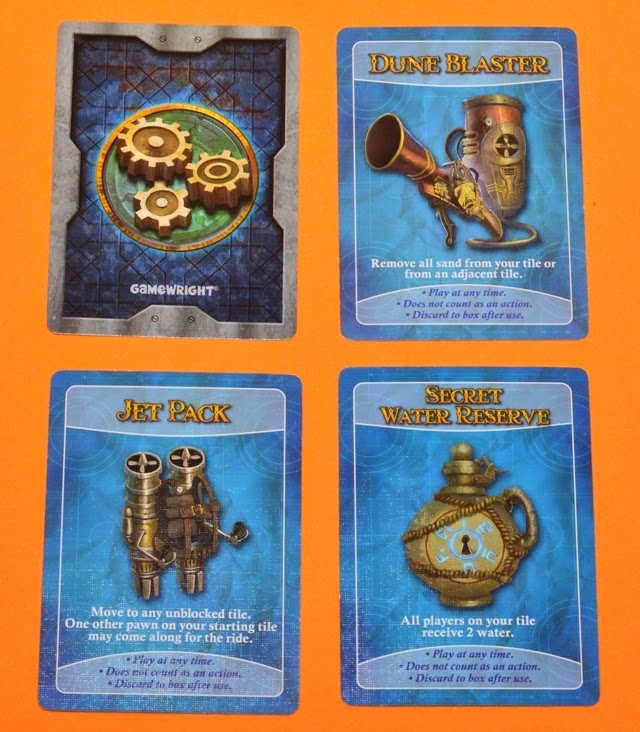 For example, the secret water reserve, on the bottom right corner, gives everyone standing on the same tile as the player who plays the card 2 life points.

The Red Deck has 3 types of cards: 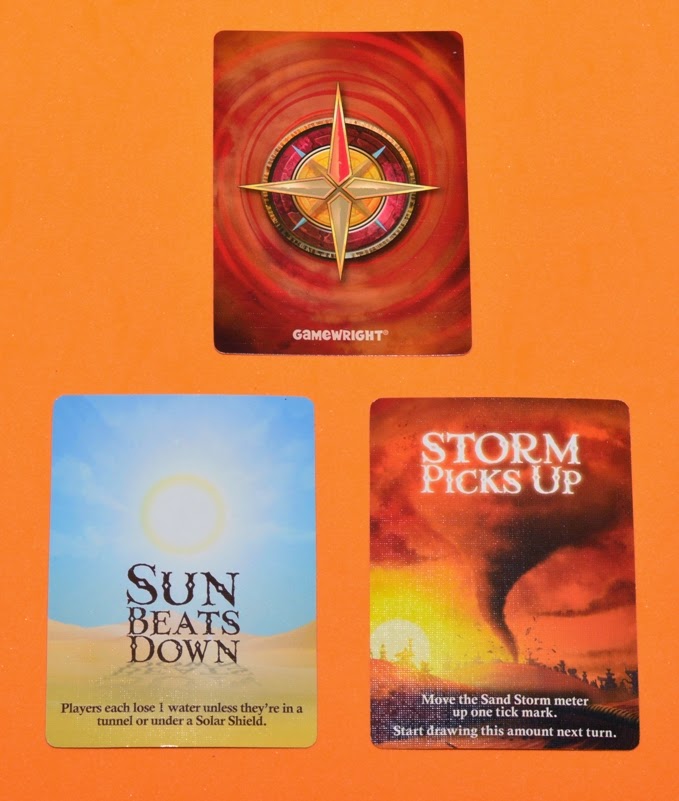 1) Sun Beats Down: which reduces everyone's life by 1, unless you are standing in a tunnel or have a special Blue card that protects you.
2) Storm Picks Up: which increases the meter on the Sand Storm meter, which will cumulatively increase the number of Red Cards that need to be drawn.
3) Wind movement (not shown in picture): I will show these later but these are the cards that increase the amount of sand piled upon tiles and tiles being shifted

You win if you locate and collect all 4 necessary plane parts throughout the desert AND find your way to the Launch Pad, which is one of the tiles that needs to be excavated.


3) You run out of time - after a certain number of turns, which varies depending on the difficulty level and the number of people playing, the sand storm meter reaches the Skull symbol (meaning the storm has proven too strong).

You can perform up to 4 actions on your turn.

Each of these actions may be repeated where possible and done up to 4 times:

1) Move one tile away
Moving is straight forward - in the example below red has taken up 3 actions in her turn by moving 3 tiles away. 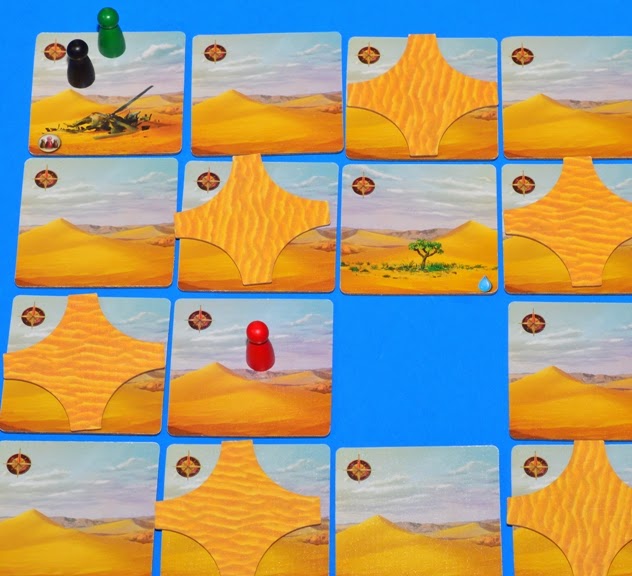 For example, red below excavates the tile by flipping it over. It reveals a gear symbol, meaning she can draw from the blue equipment card deck alluded to above. 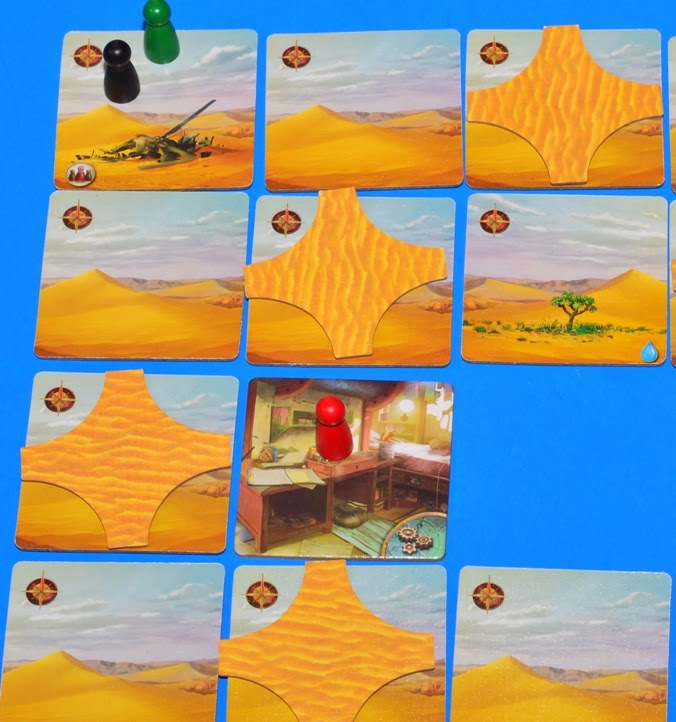 3) Remove Sand from an adjacent tile or the tile you are standing on:

This is important for two reasons:
a) It prevents one of the losing conditions from coming true where sand tiles run out (as sand removed goes back into the pile) and
b) If a tile is blocked by 2 or more tiles it cannot be travelled over; thus removing sand tiles is key to accessing certain areas of the board.


Moving tiles according to the Wind Cards

After a person does their turn, it is time to draw Sand Storm Cards. I mentioned above that there were 3 types of such cards; I now explain what the Wind Cards do as these are the most common types of Sand Storm Cards drawn.

Suppose this is the first Wind Card drawn: 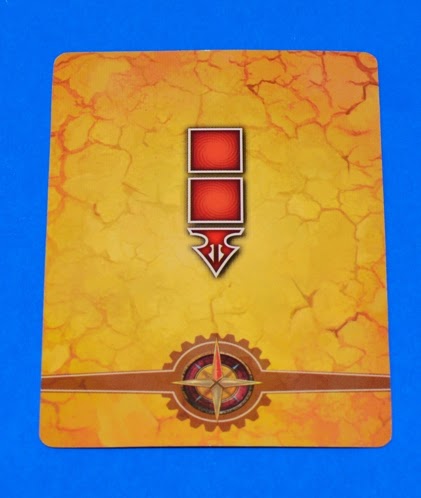 This means that two tiles must shift downwards towards the hole in the board - the arrow on the card indicates movement towards the sandstorm eye like so: 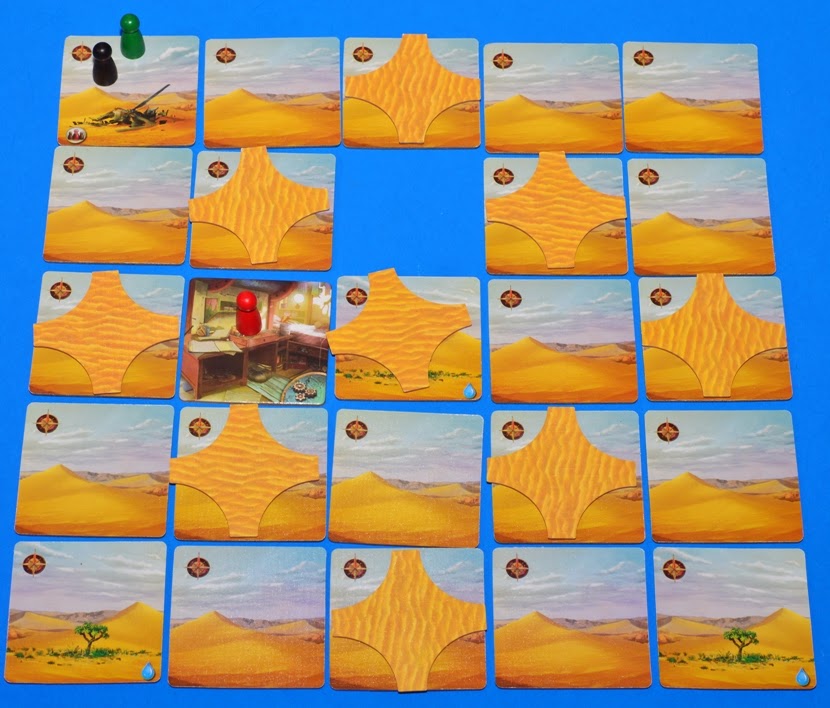 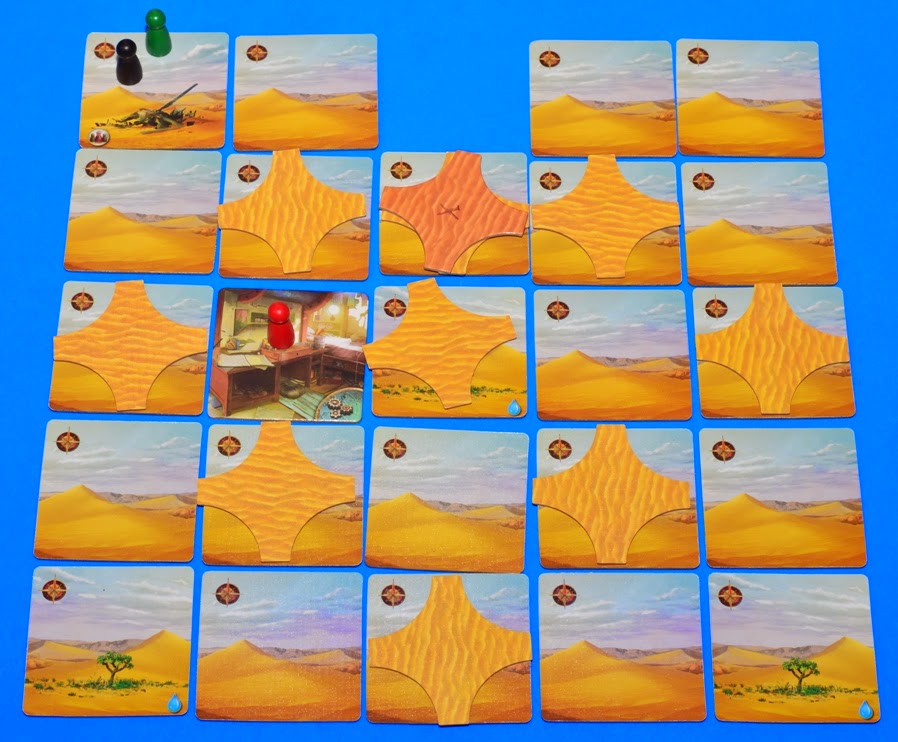 Sand is also laid on each tile that has been moved.

I won't show you more pictures, but for this particular 3 player game, according to the sand meter above, two more cards are drawn and if they are wind cards, the tiles are moved accordingly.

Then, the next player in order does their turn.

When you excavate a tile, there are a few surprises you can find: 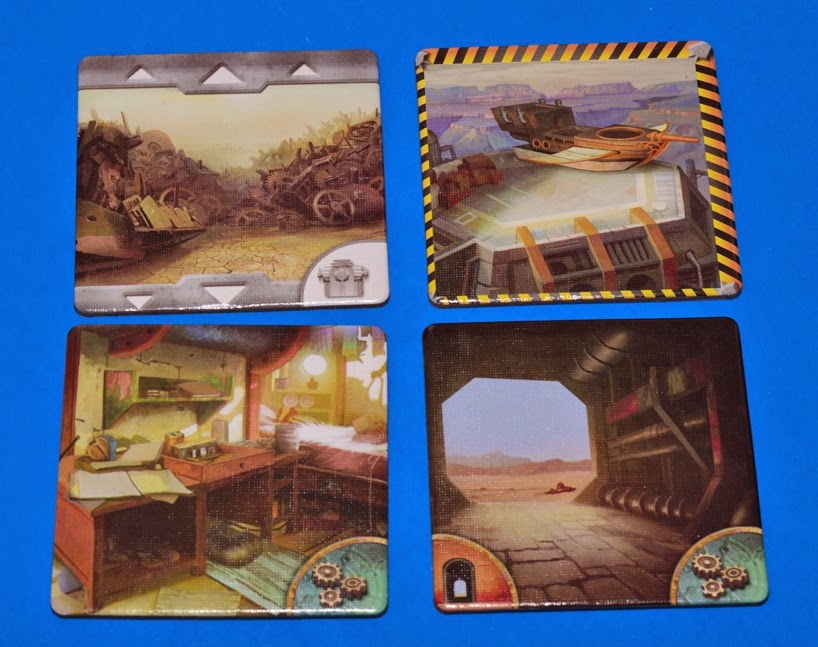 You can receive a clue (top left tile); the Launch Pad (top right tile); a chance to draw from the Blue Gear deck (bottom left and right tiles); and a tunnel (bottom right).

Tunnels are useful as they shield you from the sun and you can travel directly from one tunnel to another. 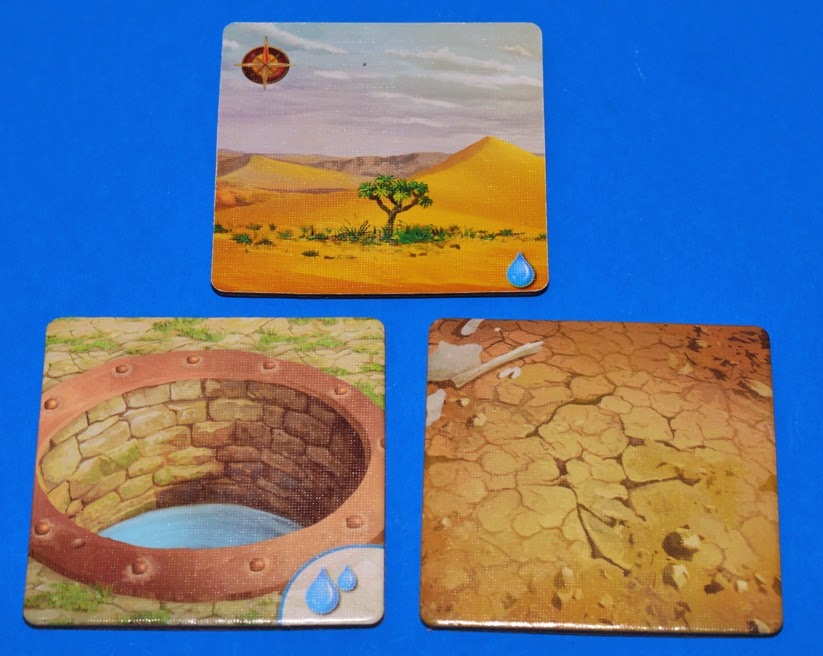 Of the 3 Oasis tiles, two tiles contain water (which allow all members to immediately replenish 2 water and lets the Water Carrier take water from) and 1 is a mirage with no water. 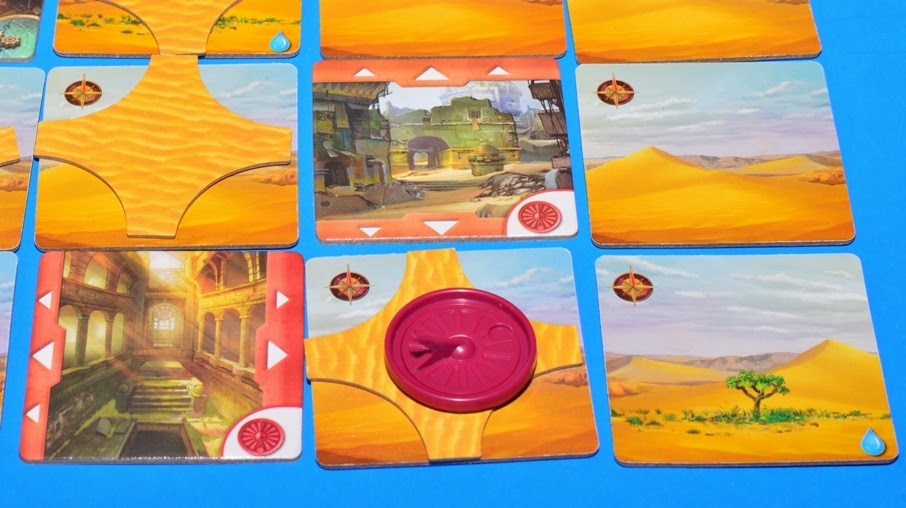 For example in the above scenario the Red piece would appear there, at the intersection between the imaginary lines given by each of those excavated clue tiles.