It isn't for everyone but, if you like puzzles, problem-solving or brain-teasers, and don't mind a one-off challenge (ie. ZERO replay value), you might enjoy this.

However, be prepared for plenty of misses - whilst a few of the riddles and puzzles are good, some of the others are fairly stupid. 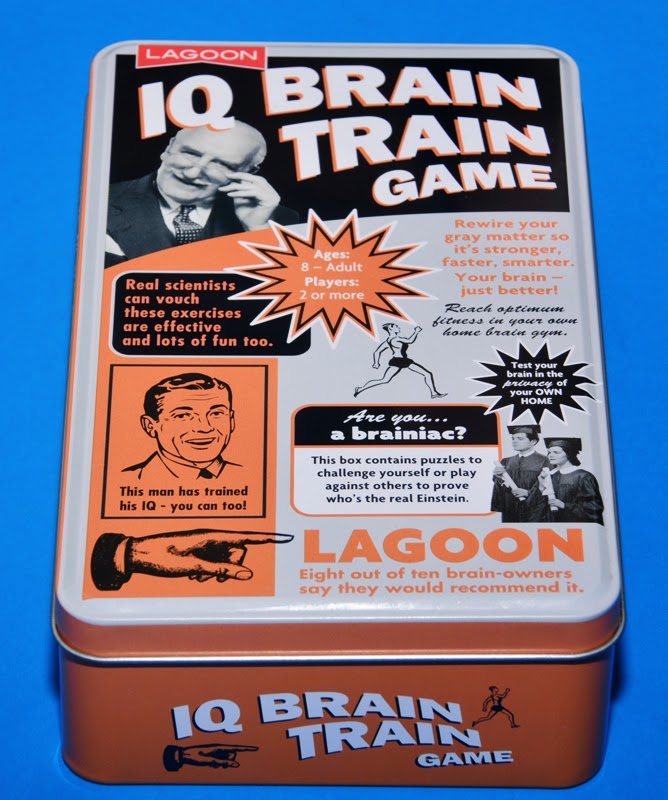 Age: 8+
Arguably it's a game suited more towards teenagers, but if you are a riddle fanatic, age isn't a barrier.

Time to play: As long or as short as you want. Less than 5 minutes to an hour?

Price Range (AUD): $13 to $20 approx. The lower end of the price range is arguably reasonable, but that being said not everyone will think it's worth it to pay $13 for 2 decks of cards in a metal tin - especially since they will probably only ever be used once. Therefore this isn't exactly money that is well spent.

Availability: Quite widely available online; I found this copy at the ABC Shop.

Quite honestly, if you enjoy riddles (and don't mind revisiting some common classics, slightly altered) this isn't necessarily a bad game at all to pick up. My sister and I went through the deck just trying to solve the puzzles, and even for young adults such as ourselves, some of the riddles weren't so straight forward. We have encountered a fair share of riddles; whilst some of the riddles we already knew, there were a few that we had to think twice about. Many questions in the pack are not riddles at all but just problem-solving maths questions - some tricky, and some not so. The majority of questions are think-outside-the-box type of questions. The variety of questions offered in the deck is quite decent.

However, if you were expecting something of a real challenge or wanted to play something for a group of people, this isn't exactly what I would purchase. That being said, it depends on your group of friends and the age group you are catering for - young teenagers who like a bit of a brain challenge would probably enjoy this the most.

The real problem of IQ Brain Train is that the 'game' doesn't have any replay value or longevity because once you know the riddles you can't ever play the game again unless you happen to forget: this is the main reason why I would score a pass to this game. But do bear in mind that some of its content is nonetheless quite interesting and has some depth to a certain extent. This is probably why I would score IQ Brain Train slightly higher than Top Trumps, even though Top Trumps is more of a game than this but the difference is only marginal in my view.

Another major problem of IQ Brain Train is that some of the riddles offer really silly answers. Of course the answers are plausible explanations, but it would be far-fetched to expect an intelligent or rational person to think of that kind of answer (not because they lack any IQ or can't 'think outside the box' but because the answer is just too ridiculous or absurd). I was about to give an example but I shouldn't spoil it for those intending to purchase this game.

However, despite this let down, some of the riddles are in fact quite interesting, and in fact, a couple of the riddles made me laugh because it made me realise how silly I was for not thinking of that answer. Make no mistake about it, there are a handful of good riddles in this tin box. I have provided a few examples (without answers) in the pictures below.

In summary, if you'd like a solo challenge or want to share this with a couple of nerdy friends who like solving puzzles, please do give this a go - it really isn't that bad if you are that type of person (and in that respect, if you fit that mould, then age probably doesn't matter). But remember: it will only last a couple of plays at most. My score above reflects what I think most people (the typical consumer) would think of this game.

What makes this game fun?
If you are looking for a one-off challenge to test your brain and your nerdy friends, give this a shot. It isn't too bad if you are the type.

There isn't much to show here.

Here is what the inside of the box looks like. 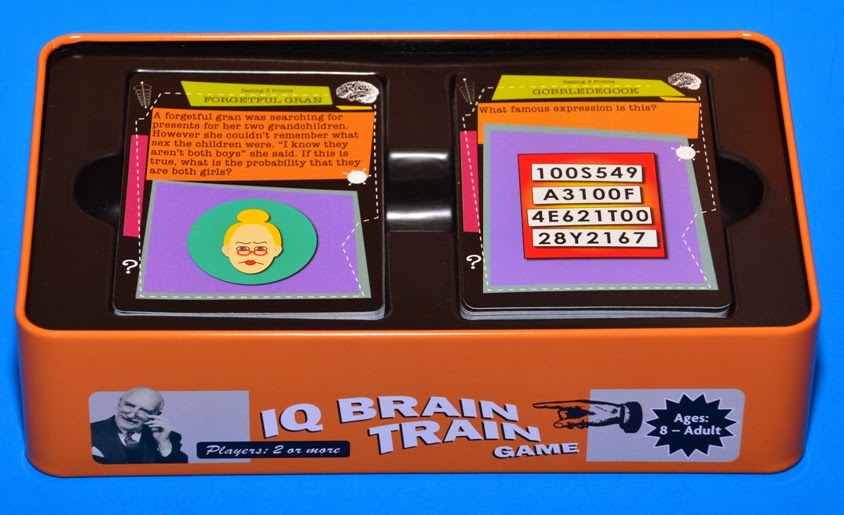 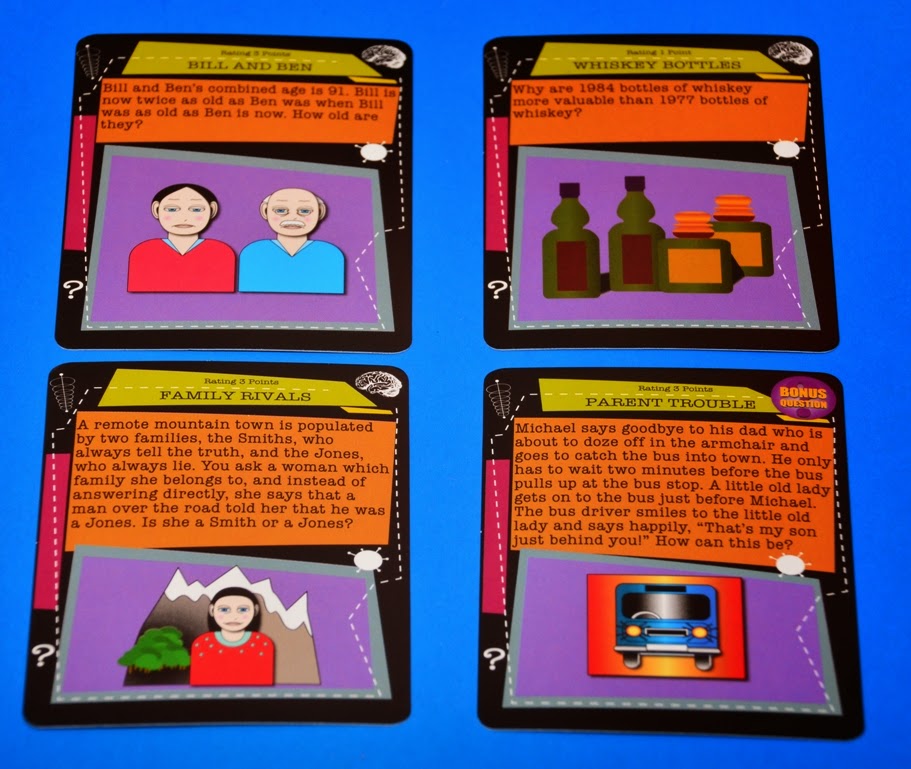 Incidentally the top left riddle was the one I struggled with a lot - it involves some not-so-straightforward simultaneous equation solving.

If you play Solo, you must solve the puzzle in as many minutes as the number stated on the top of the card. So if the puzzle's rating is 3 Points you need to solve the problem in 3 minutes; if you don't you only score half the points (no matter how much you go over the time limit by).

Answers to the riddles are on the back of the cards. Some cards have bonus questions which can only be answered if you answer the initial question within the time limit. Correctly answered bonus questions award the player with 2 points.

Or you can just ignore all of this, like I did, and do your own thing....

The same timer guidelines apply as Solo Play but anyone can join in on the question asked.