This post is dedicated to every friend I have and will play this game with, but in particular: Shaun, Kevin, Nick, Sam, Carina, Chloe and David (who are my frequent partners in crime).

May we have more fruitful alliances to come (whether as Minions or Loyal Servants of King Arthur)... 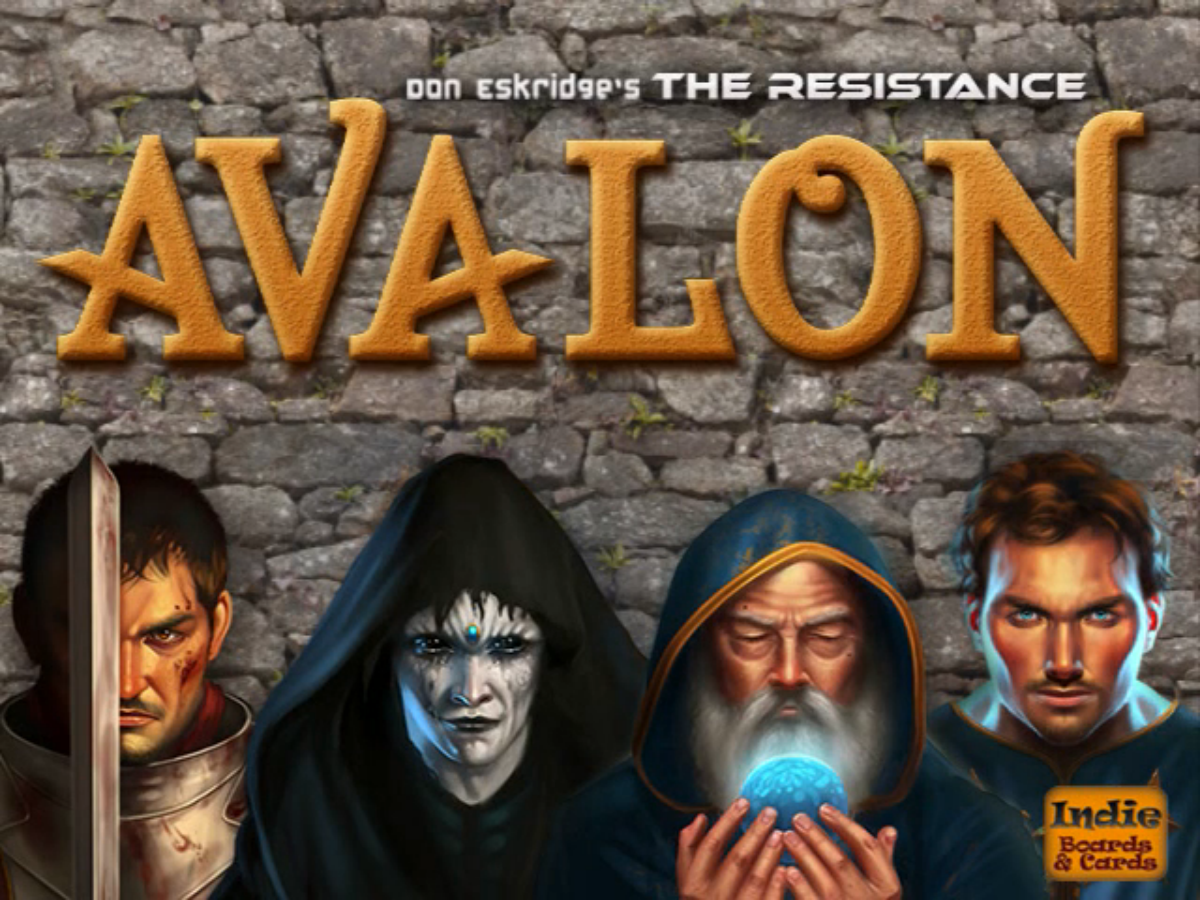 Notable Honours: This is, thus far (at the time of writing), probably my favourite game by a long shot.

Publisher: Indie Board and Card games

Editions: This is an improved edition over the original The Resistance (it adds Merlin + other cool characters)

Players: 5 to 10 players, probably best with 7 or 8?*
*10 August 2014: I will note though that the 6 player game is quite great as well - each mission has different numbers of people (compared to the 7 player and 8 player games where the 2nd and 3rd quests have the same numbers of people - which could make it easy for the good guys to fluke a victory in an untalkative group)

Age: You'd probably need to be at least a teenager to appreciate this game properly. 13+?

Time to play: About 30+ minutes, depending upon how argumentative you are as a group.

Availability: Quite widely available but I don't remember seeing it at department stores. Very popular game, at least in the US.

I cannot speak more highly of this game.

Essentially it's a revamped and powered-up version of mafia, with incredibly more substance.

The bad guys know who the other bad guys are. The good guys know nothing. The good guys have to succeed a majority of quests (3 out of 5 rounds) but to do that they must know who to trust because they will be selecting who should be going on the various quests. Detecting a bluff and observing mannerism, tone and body language is a key aspect of this game.

If the good guys are to win, they will need remarkable teamwork, instinct and communication. If you're a bad guy, it's always fun bluffing, sewing confusion amongst the group and trying to stay hidden.

If you've already played The Resistance and are wondering what makes The Resistance: AVALON different, you should know that the key difference is the introduction of new characters. Most notably, there is Merlin who knows who the bad guys are but must not reveal his identity (because otherwise, in substance, the bad guys will win).

These extra characters do provide some additional tweaks you can factor into the game to make it either more difficult or easier for one side.

All in all, this is a fantastic game. Purely based on two simple phases of voting, the underlying beauty of this game that makes it stand out from the many mafia games out there is the fact that it plays a lot cleaner and simpler.

*August 2014: I am in two minds as to whether to reduce this score of 9.3 to something like 9.0. Maybe it's just the fact that I've played this too many times but there are some games of Avalon where the same patterns of human interaction keep occurring, to the extent that it can become repetitive. The group you play with is important too - play with a lazy/tired group and teams get approved immediately without thought. But that isn't necessarily the game's fault is it? On one view, people just get tired of squabbling over every single quest. Needless to say, irrespectively, the kick is always there and I think I have just reached the breaking point for this game. I can't wait for the Kickstarter The Resistance Expansion: Hostile Intent and Hidden Agenda which is to come in November.

Another issue is this: I'm wary of giving this game too many high marks when I haven't played everything that has to be offered!

I highly recommend this game if you are looking for a heavily social and dynamic game that involves uncovering who is good and who is bad - the results are sure to surprise you amongst your friends! It is truly a fantastic crowd-pleaser and best played with good friends.

First step: Everyone gets a loyalty card. The game will tell you the distribution of Good (Loyal Servants of King Arthur) and Evil (Minions of Mordred) depending on how many people you have.


In the example below, we are playing with 7 players.

You distribute the loyalty cards face-down, and you enter the Narration phase.

Now the purpose of this phase is to ensure that the Bad guys get acquainted with each other. This happens via a classic mafia/werewolf narration.

Anyone can narrate the opening lines. Usually it's best to let the person who knows the game the best to narrate as it can be quite difficult to remember the lines that need to be said.

Here is the basic narration:

1. Everyone close your eyes and bow your heads.

2. Minions of Mordred open your eyes and look around to find other Minions.

3. Minions of Mordred close your eyes.

4. Everyone open your eyes

After that's done everyone now receives one Approve and Reject token each like so:

Now have a look at the Quest Board for 7 players:


The big numbers show how many players must be picked to go on a "Quest". There are 5 Quests in total.

I will explain the Vote Track later, below.

A random person receives the Crown icon (in this case below, the player at 2 o'clock).

This means they are the team leader and they get to select a team of people who get to go on a quest.

The leader does this using the shield icons.

Then everyone votes - all votes are placed face down. And then they are simultaneously revealed.

Here is what happens, for example, after the votes are revealed:

We have 5 Reject (Black) tokens and 2 Approve (White) tokens. The Quest is NOT approved, so the Quest does not go ahead.

You always need a MAJORITY of approvals for the Quest to go ahead - a tie is not enough and is considered to be a rejection.

Now the leadership (crown) token gets passed to the next person: the player at 3 o'clock. In this example, the leader chooses themselves and they also choose the player at 2 o'clock.

Everyone votes, and this is what happens: 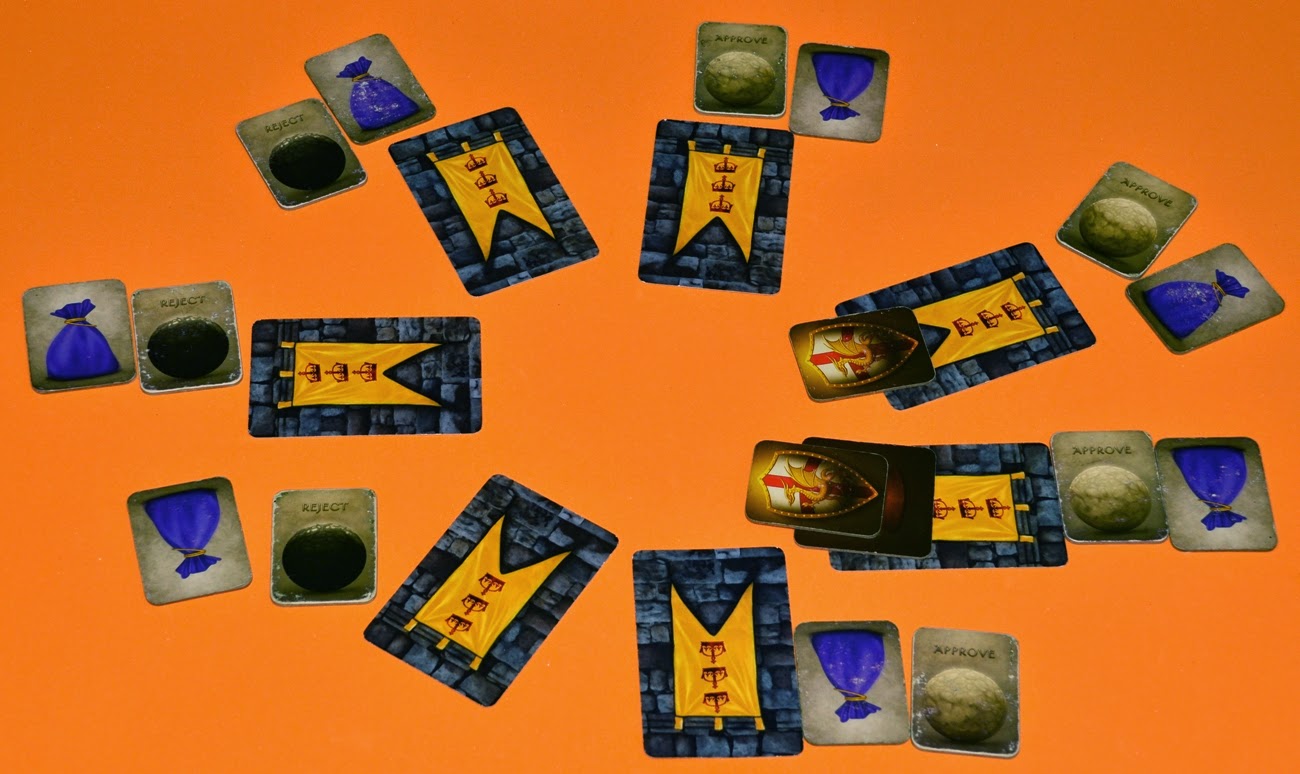 This means that the players at 2 o'clock and 3 o'clock are going on a Quest.

Important note: If the group rejects a team selection 5 times in a row, the Minions automatically win. Here we are safe - there was only 1 rejection. We use the Vote Track on the Quest Board to keep a track of this


Phase 2: Succeeding or Failing a Quest

Players who were voted to form part of a team now get a Succeed and a Fail Card.

Importantly: GOOD GUYS MUST NEVER FAIL A MISSION. THEY MUST ALWAYS SUCCEED A QUEST.

Bad guys get a bit more flexibility as they can choose to either Fail or Succeed a mission - there are always strategic benefits to this latter option, such as gaining the trust of others and not arousing suspicion. 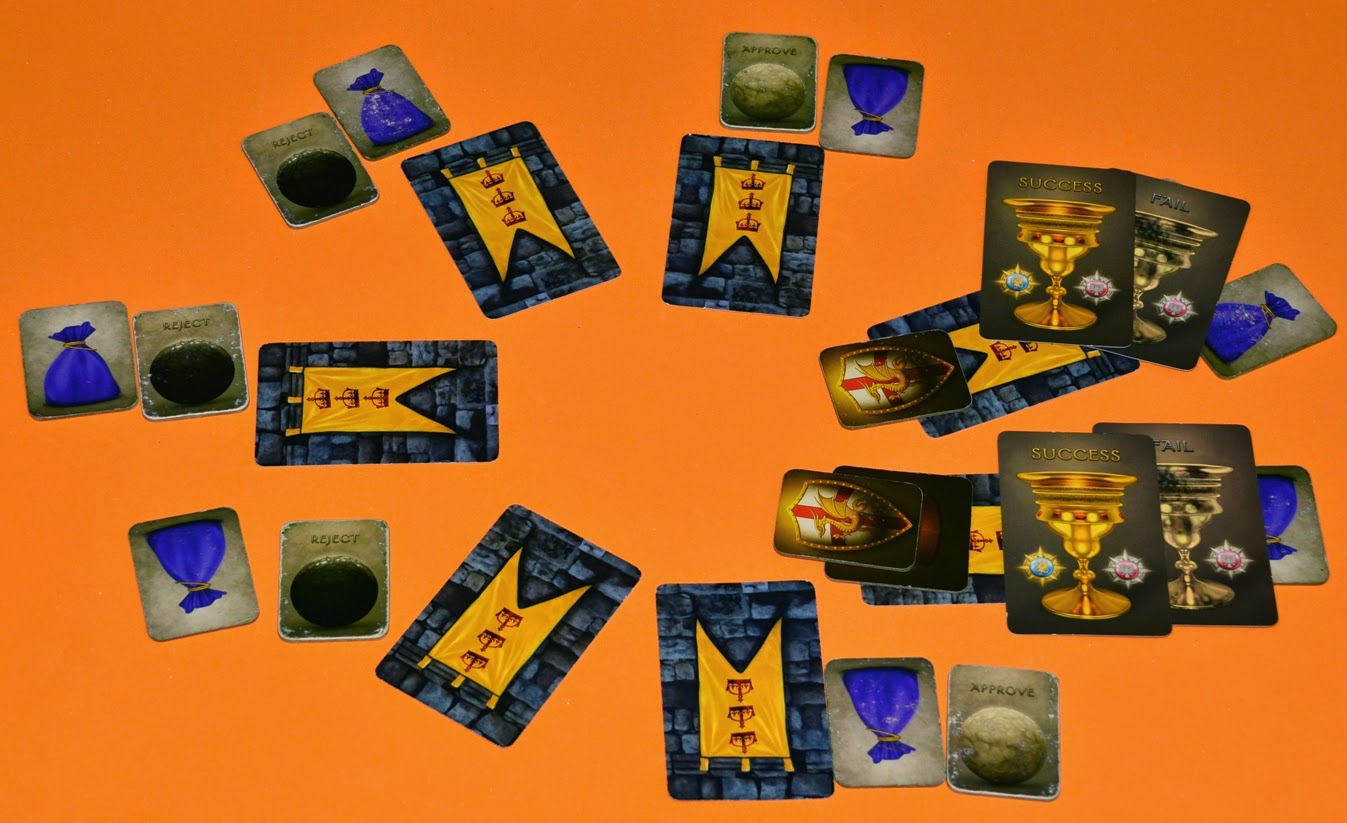 Then they secretly place their other card elsewhere in the Discard Pile (here, on the bottom right corner). Both discard and actual votes should be shuffled to mask the identity of the bad person (if there is any). 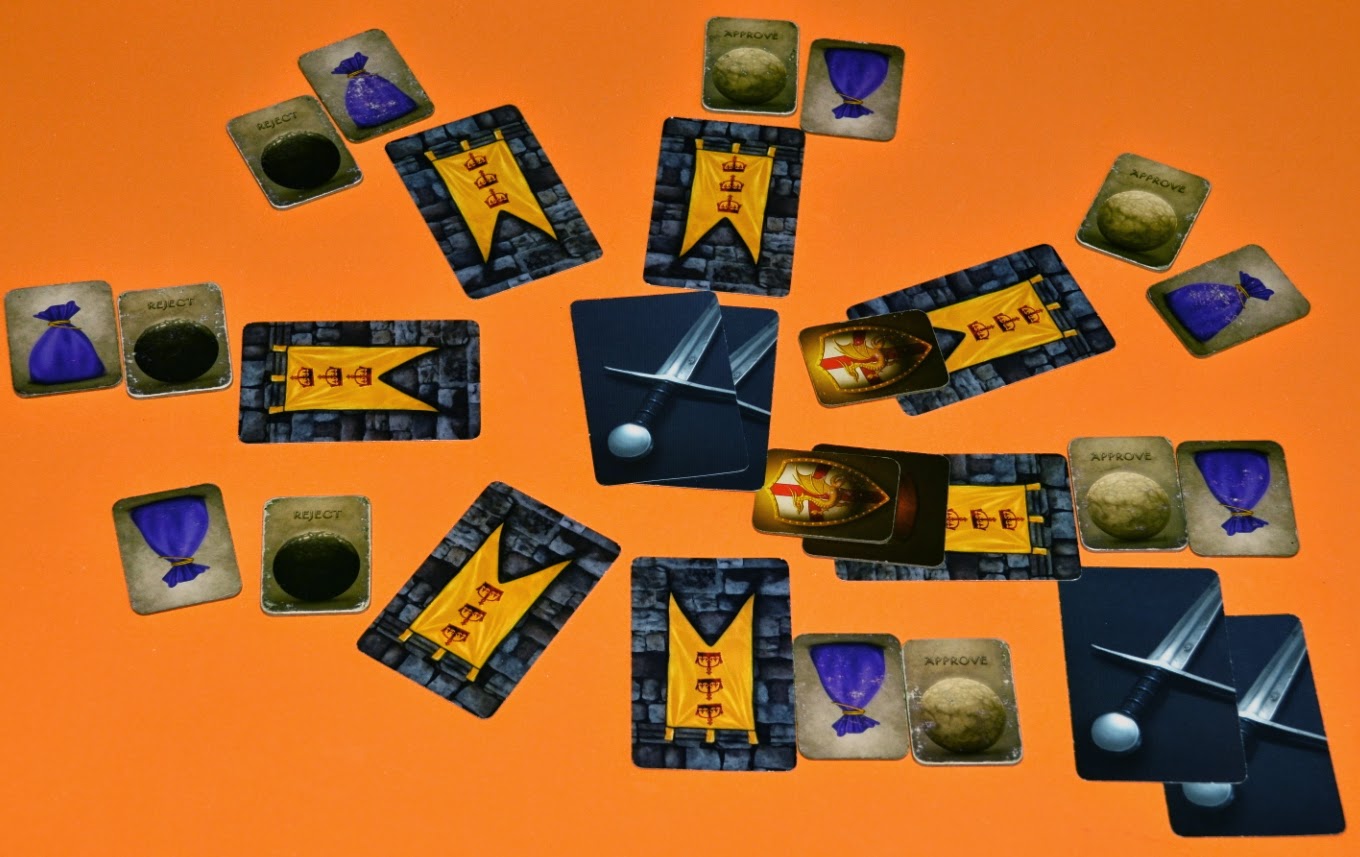 Then the votes are revealed: 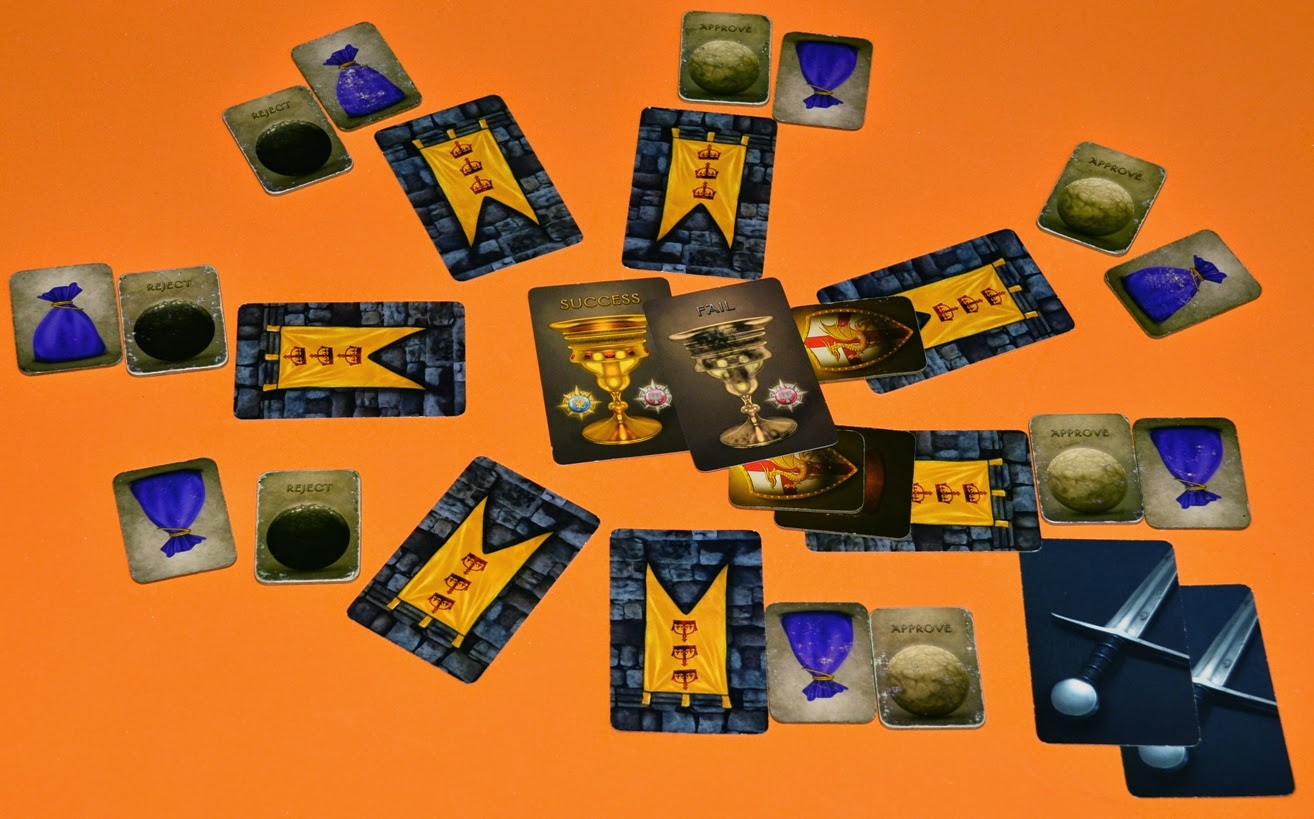 Since there is 1 Succeed and 1 Fail here, the group now knows that, between 2 o'clock and 3 o'clock, one of them is a bad guy. It is up to the rest of the group now to decide who they trust and who they should include on future missions.


Phase 1 and Phase 2 continue for the remaining Quests until a team has won a majority of quests.

The above rules were an explanation of the "normal version" of the Resistance. The Resistance: Avalon provides a variation with Merlin and the Assassin amongst other cool characters.

(Note: Many people get confused about the Assassin. The Assassin is just a Minion of Mordred, but they have an additional role to play ONLY IF the good guys win) 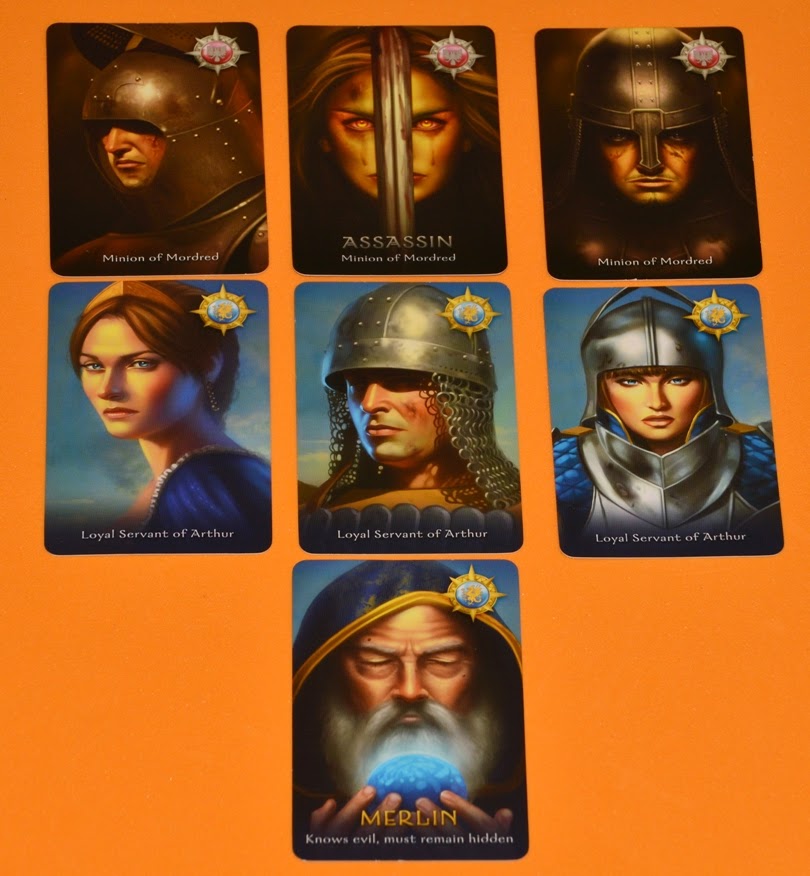 Why? Because if the Good Guys win, then the minions get a LAST SHOT chance at winning: If the Assassin can guess who Merlin is, the bad guys win.

The Assassin is able to discuss this decision with their team mates.

To make the game more interesting, you can add:

If you add the above characters, the narration phase can get quite complicated:

1. Everyone close your eyes and bow your heads.

2. Minions of Mordred (EXCEPT OBERON) open your eyes and look around you.

3. Minions of Mordred close your eyes.

4. Minions of Mordred (EXCEPT MORDRED) stick your thumb out.

6. Minions of Mordred, put back your thumbs.

8. Merlin (AND MORGANA!) stick your thumbs out.

10 Merlin (and Morgana), remove your thumbs.

12. Everyone open your eyes

There is a Lancelot promo character who changes alliances every round apparently. It sounds pretty awesome and I'd like to try it out sometime.

I also wish there were more special characters for the good guys.
Posted by Andre Lim at 20:58