After The Settlers of Catan, this is my second most influential game that veered me onto this adventure of collecting games (= 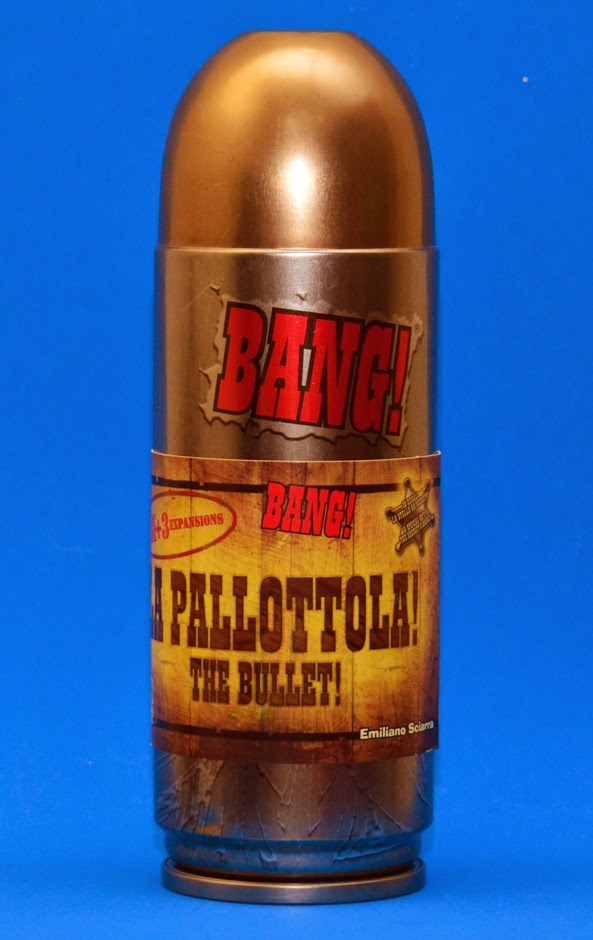 I thank Uel, Shannelle and Lael for showing me this Spaghetti Western, which is a cult classic (of sorts) for them. They knew this game long before I got into the hobby :)

Differences: The deluxe The Bullet! edition contains the original Bang! along with three expansions called "High Noon", "Dodge City" and "A Fistful of Cards".

As a special bonus 3 special characters called "Uncle Will", "Johnny Kisch" and "Claus "The Saint"" have been included in The Bullet!, along with 2 'new' cards for High Noon ("New Identity" and "Handcuffs").

There is also the very handy and cool Sheriff's badge.

Publisher: dV Giochi amongst others

Players: 3 to 8 (in the original Bang! only 4 to 7 can play as presumably only 7 role cards are provided). The rulebook has special rules for 3 players, though I'm not sure I would recommend this game with any less than 5 players (this is debatable).

Price Range (AUD): $57 to $130 for the Bullet, but if you ordered the normal Bang it would be about half this price (around $40 including shipping). The lower end of this scale is a bit hard to find, just from a quick search of online retailers. I got the Deluxe Bullet edition for $52 including shipping sometime June last year, which just goes to show how expensive everything is now.

The reason the price has changed so much must be because of 1) the AUD dropping in value relative to the USD at the time of writing and 2) there being less copies of the Bullet floating around.

Availability: Available online and I've seen it in a few hobby game stores - but it's quite expensive

I want to keep this short and simple: Bang! in itself is a great card game if you enjoy mafia-style games and hidden team alliances or partnerships. Bang! The Bullet! is just that much better as it includes so much bonus content in a cool-looking case.

The tension as each player tries to figure out which team everyone else is on is gold. Often inferences will be drawn based on actions done in relation to the Sheriff. For example, shooting the Sheriff is seen as an obvious indication that you are bad (but this isn't necessarily so - people have strange, weird and other reasons for shooting the Sheriff!! Ridiculous I know but it HAS happened before). People, often Outlaws or Renegades, will bluff and try to make friends with the Sheriff, and the Sheriff will have a hard time deciding who his/her real friends are (and, likewise, the Sheriff's real allies, the Deputies, will have a hard time proving their allegiance to the Sheriff).

This is a good game if your game group likes this kind of tension. The variety of action cards provided in The Bullet is staggering and will keep you interested for hours. The overwhelming number of character cards, all with special abilities, is extremely fun and provides diversity to the game. These unique abilities make all the difference and add to the whole Wild West theme and flavour of this game.

* Great game but suffers from that drawback common to player elimination games - where those eliminated have to wait until the next round starts before they can play again (much like King of Tokyo - except Bang! arguably offers a bit more variety and tension than that game)

What makes this game fun?
The confusion and strategy associated with figuring out who is against the Sheriff and who is with the Sheriff makes this game a blast; if you enjoy this kind of social deduction - although in a different, and slightly more convoluted, format to The Resistance: Avalon - give this game a go.

I won't show you the High Noon and A Fistful of Cards expansions just yet (see the very end of this review), but otherwise the contents of the game are depicted as below: 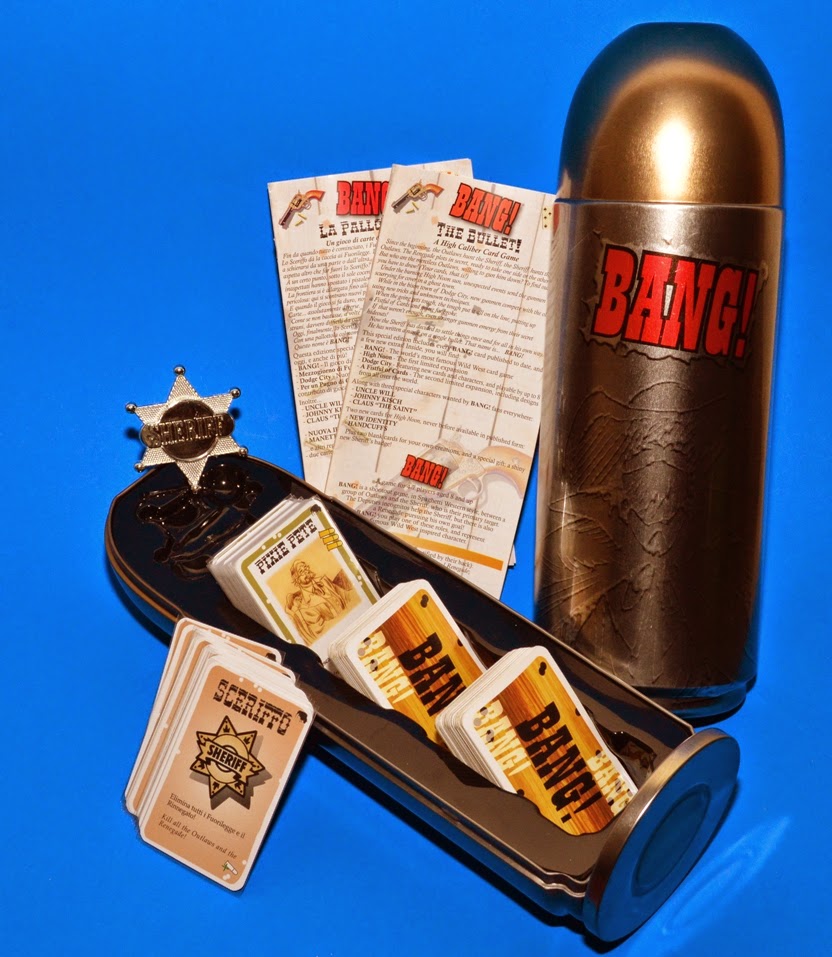 The game (or, at least my copy of it) provides 12 role cards:


However, despite the supply of these 12 role cards, note that the game recommends play for only up to 8 players - which makes sense because it would be chaotic playing the game with 12 people (as you probably wouldn't have enough cards to do so - you are welcome to try though of course).

There are essentially at least 3 teams in this game constituted by 4 different types of roles: 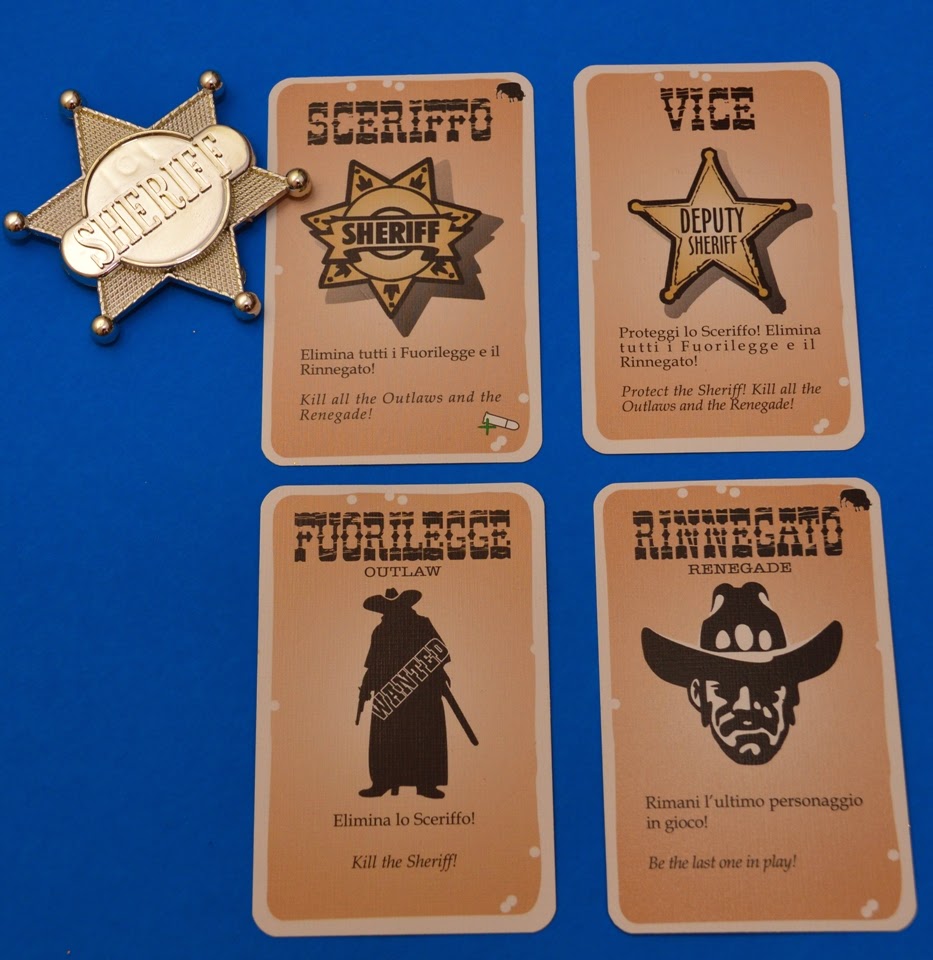 Sheriff: The Sheriff is on the Sheriff's own team where the aim is simple: Kill all the Outlaws and the Renegade(s) without letting yourself (the Sheriff) die first. [Note that the Sheriff starts off with 1 additional life point, as indicated by the + Bullet symbol on the bottom right side of the Sheriff card]

Vice/Deputy: The Vice or Deputy Sheriff(s) is on the Sheriff's team. The Deputy's job is to protect the Sheriff and kill all the Outlaws and the Renegade. This may sound easy but it involves obtaining the trust of the Sheriff, which is extremely difficult to secure at the start as others will seek the Sheriff's allegiance.

The Renegade's aims are to:

1) Be the last-person-standing in the game (ie. eliminate everyone else in the game) subject to the proviso in 2);

2) Ensure that the Sheriff is the last player to be eliminated; that is, the Sheriff cannot be eliminated until the very end. Therefore, if the Sheriff dies when there are 3 or more players left in the game, the Renegade(s) loses and the Outlaws win.

Character cards are equally important as they determine your special abilities and life points.


Here's a selection of a few characters found in the game, some clearly more powerful than others.

For example, Teren Kill (not included in the Bullet!) draws a card when he is about to be eliminated and if he draws something that isn't a Spade he stays at 1 life point and draws 1 card. He basically gets a 75% chance of coming back to life, assuming an even distribution of suits in the deck. For such a strong ability, he only has 3 lives.

As another example, Calamity Janet can play Bang! cards as Missed! cards and vice versa, which is a crazy ability to have. 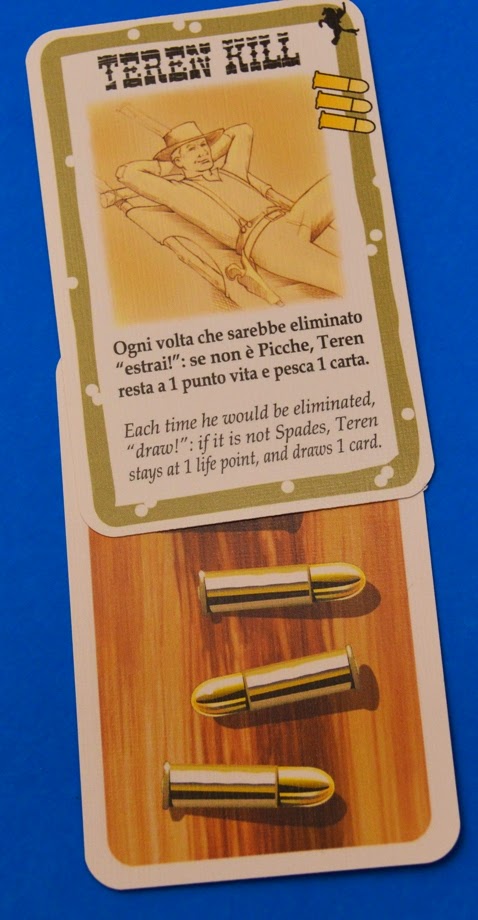 The backs of the character cards are used to indicate life. For example, if you chose Teren Kill (who is from the Wild West Show expansion, which is not included in this game), you'd cover up the bullets like so to indicate your starting health of 3 bullets. (If you were the Sheriff you'd start on 4).

The Concept of Distance

Usually, unless the card says otherwise, each player can only shoot or attack someone one distance away from them at the start of the game. That is, you can only shoot people directly on either side of you. Distance can be increased or decreased with the aid of various Blue Equipment Cards (discussed below) 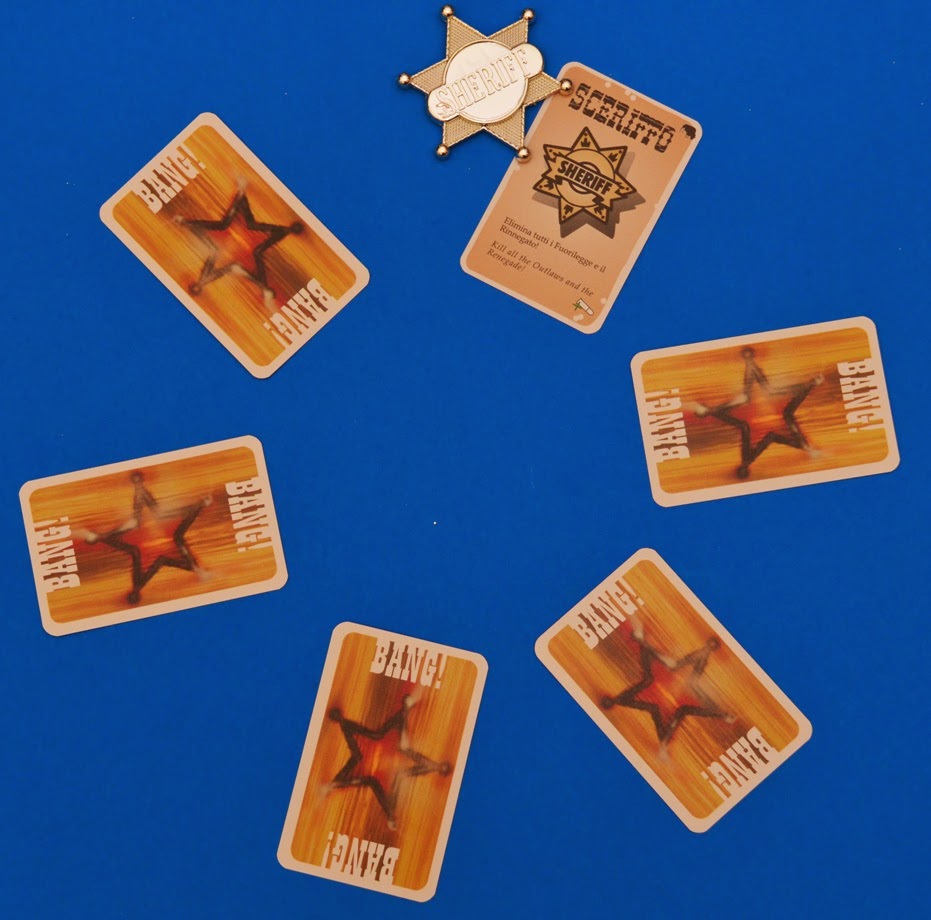 So in this 6-player game, the Sheriff would need a gun of range 3 to shoot the furthest person in this game (the player on the bottom), assuming that no one has any special equipment cards that increase their distance away from other players (see below).

These cards perform immediate actions, such as shooting other players, discarding or drawing cards. 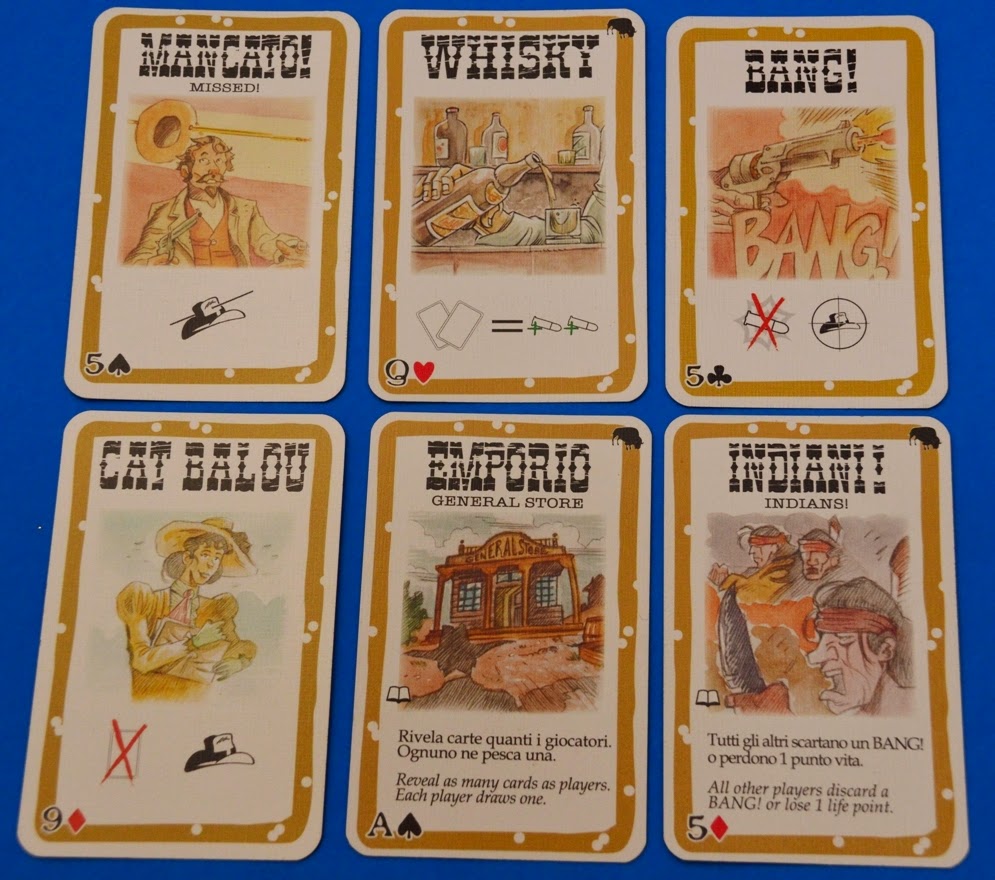 For example the Moncato! or Missed card (top left) is a reaction card that can be played when a Bang! card (top right) is played. Note that under normal circumstances only 1 Bang! card per turn may be played, although the Volcanic gun lets you shoot an infinite number of Bangs (at the cost of only being able to shoot to those immediately adjacent to you). If you are hit by a Bang you lost a life point, and reduce your health by 1 bullet by sliding your card over to cover a bullet.

Beers or Birras (not shown above) can be used to regain life points but may not be used to help others.

The Cat Balou card is used to discard a face-up card in front of a player, or a random card from another player's hand (you blindly pick in this latter option).

These cards are played up in front of you. You cannot have 2 of the same card (I think - I know this is true of weapons, but I am assuming the same for Blue cards in general). The green cards are delayed action cards, which can only be played 1 turn after they have been put down. 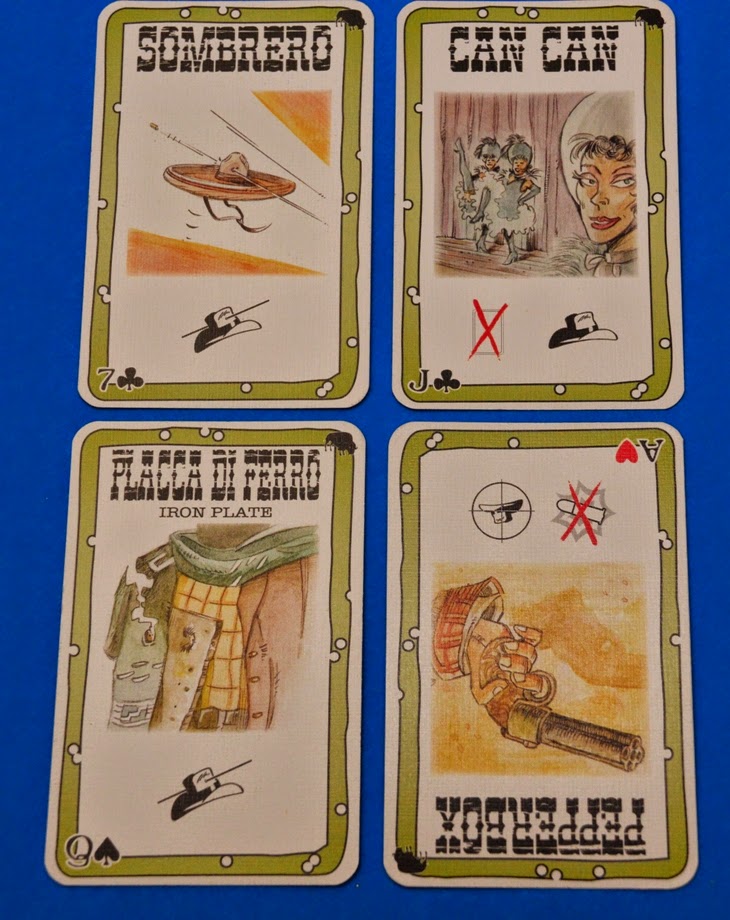 For example the Sombrero (top left) and Iron Plate (bottom left) help you dodge a Bang! card if you have played them down 1 whole turn before you use them (ie. you play them down and, after everyone else has taken their turns, it comes back to your turn).

The pepperbox is upside down but lets you

High Noon and A Fistful of Cards

These cards are additional cards that change the scenario in an unexpected way each round (someone draws one card whenever it is their turn again - and this replaces the effect of the previous card drawn). The game advises you to choose one deck or the other, but you could choose to draw both if you were feeling a bit crazy. 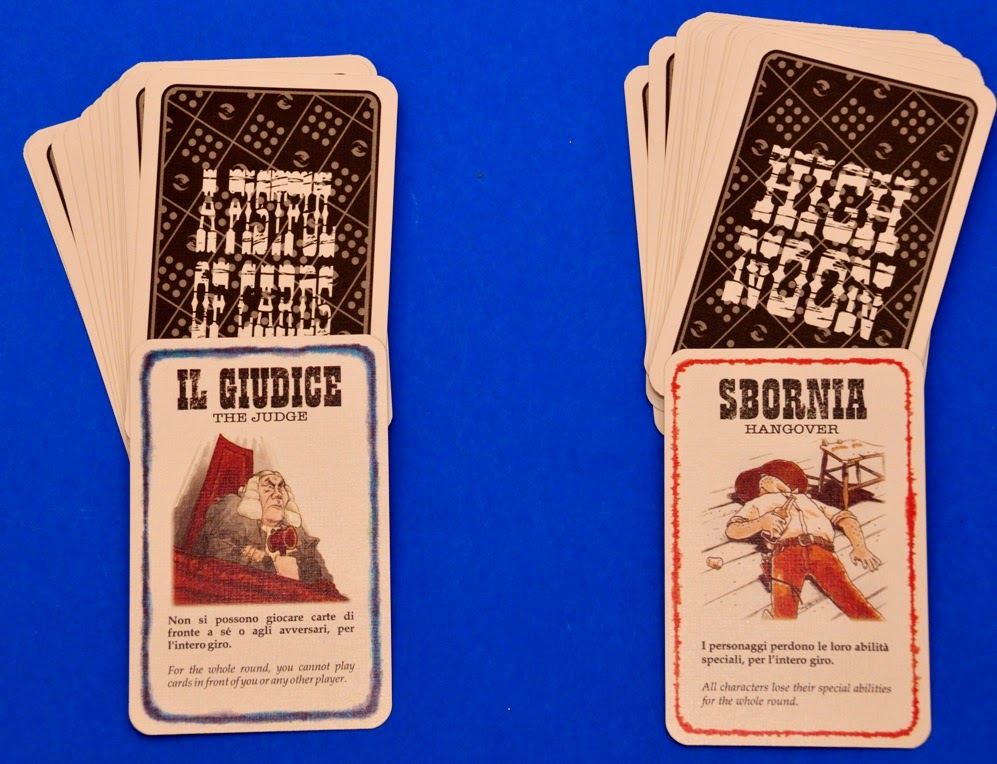 For example, the Hangover card in the High Noon deck makes all characters lose their special abilities for the whole round!

Three special character cards, evidenced by the gun symbol, are added to this game. They all have some pretty crazy abilities. 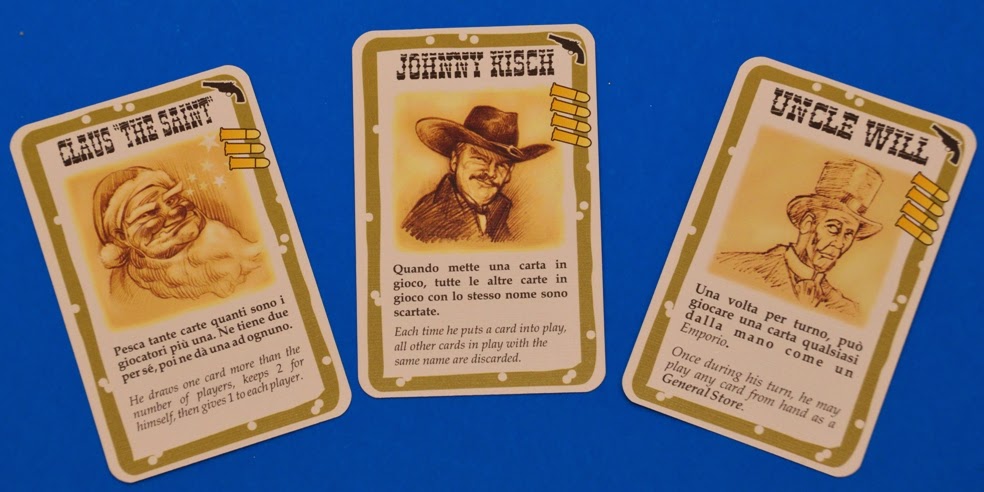 Claus the Saint is a favourite - he gets to distribute cards to all players including himself on his turn.

Notably, the game also includes blank cards for you to create you own custom cards or characters.


General Gameplay (Without going into too much detail)

2) Play as many cards as you like so long as you do not play more than 1 Bang! (shoot) card per turn and do not play the same card twice

3) Discard excess cards over the hand limit. Your hand limit is equal to the number of lives (or bullets) you currently have.