Dark shadows; sinister scheming; and that dreadful feeling that something is horrible is going to happen...

Who is the traitor, if any, amongst us? 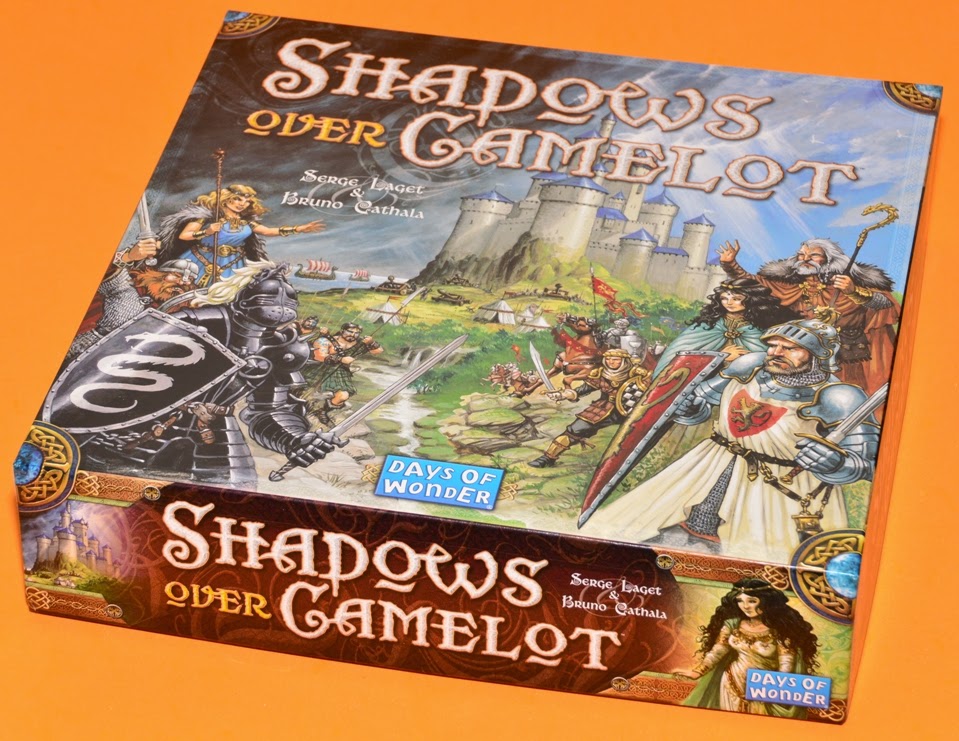 My last review to close out 2014, I end with this great game that promises tension, tough decisions and speculation.

The expansion Merlin's Company provides for an 8th player.

Availability: It's a popular title that should be stocked at your local hobby game store; however at the time of writing, apart from the major online retailers, its online availability isn't exactly what I would call widespread.

This is a great semi-social deduction and cooperative game whose alleged 'complexity' and arguably 'mechanical' nature is easy to overcome once you get the hang of all the rules.

The main thrust and attraction to this game is the idea that someone amongst the group could be (but isn't necessarily) the traitor. If 7 players are playing for example, 8 loyalty cards are shuffled, 1 of which represents the traitor. Each player gets a loyalty card and therefore there remains the possibility that no one got the traitor card. Therefore there doesn't necessarily need to be a traitor. However, even without any traitor present in the game, the forces of Evil are strong enough to make the game difficult to win for the Good Knights. The most interesting games are at times those ones where the group to finds out that in actual fact no one was the traitor - because it makes everyone feel like a fool for not trusting everyone!!

This added dimension of there 'possibly being a traitor' amongst the group certainly increases the difficulty of the game by two-fold because it disrupts group unity: for example, it is not uncommon for questions to  be raised as to whether certain actions should be performed and, related to that question, whether a particular individual has a hidden agenda in advocating for those actions. Sometimes innocent mistakes are blamed and questioned. It is difficult therefore for the group to trust one another. In any event, to win the game, quests must be successfully and cooperatively completed. It is up to the traitor (if there is any) to cause chaos by throwing around false accusations (which could be the difference between the Knights winning and losing), deliberately wasting a turn or failing to complete certain quests. The timing of when to stab the Knights in the back is often critical to the success of the Evil team.

I like this game because it provides a nice variety in the social deduction genre in contrast to games like The Resistance: Avalon. The very idea that there might be a villain (and the uncertainty behind that daunting thought) makes the game what it is. The only downside to this game is that it may seem a little convoluted and mechanical at first but it isn't too bad once you get the hang of it! There is some degree of strategy for either Good or Bad players.

What makes this game fun?
If you want to see how your gaming group deals with the pressure, tension and fear that someone amongst you could be the villain, give this cooperative game a go. 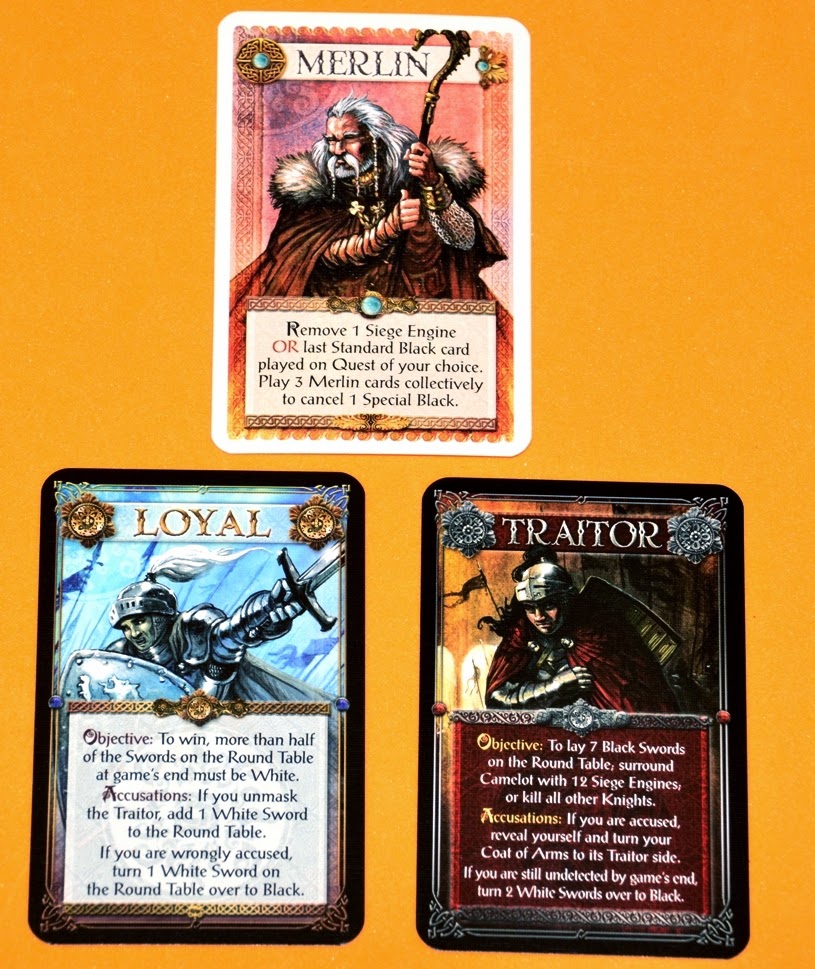 If there are X people playing, shuffle X+1 loyalty cards face down (Green side down).

Everyone gets 1 loyalty card. The loyalty card will specify if you are LOYAL or a TRAITOR.

Since there are only X people playing, there will be 1 loyalty card remaining which is put away, unseen. There is thus the possibility that everyone is loyal, which raises the question: do we even have a traitor amongst us?

Everyone also gets 1 Merlin Card and 5 White cards each.

All the boards should also be laid out face up. I haven't provided a picture showing what this looks like as it is too big but I will go through all of the boards individually under "Quests" below.

The Black and White deck of cards are laid out on the Camelot "home" board.

Everyone also gets a Coat of Arms, and a die and figurine (shown later - see Camelot heading) to match. 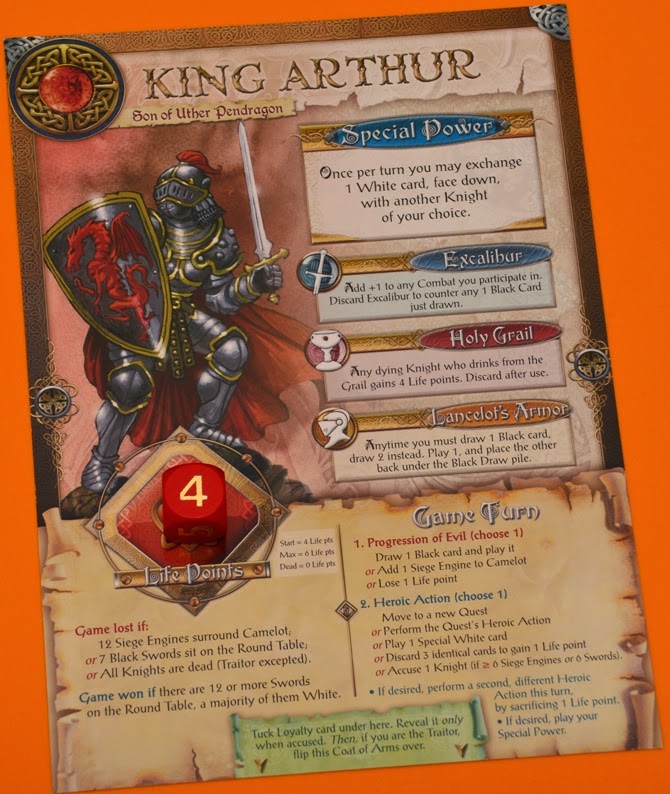 Everyone should set their life (on the die) to 4.

The Coat of Arms also provides a useful summary of what is involved and details your character's super power. King Arthur can exchange White cards with another player once per turn, for example.

The Knights (Good Guys) win if a majority of swords on the Round Table are White. Ie. 7 or more of the swords have to be White. White swords are rewarded when a quest is successfully completed.

The Good Guys lose (and the Traitor wins) if:

- 12 Siege Engines surround Camelot
- 7 or more Black Swords sit on the Round Table
- All Knights, not including the Traitor, are dead

BAD or EVIL actions include:

On each of these quests I explain what the quest's heroic action is and the general goal of the quest.

Note that the rewards of each quest are written on the corner of the relevant quest board.


Team Non-Combat Quests - where more than 1 player can join

Holy Grail: In this team quest, players must construct 7 Holy Grail cards in consecutive order. This is done by playing one Grail card at a time per turn [which is the Quest's heroic action]. Therefore it is important that players stock up on Grail cards before entering this quest.

However, certain Black cards (such as Dark Forest, which forbids any further Grail cards from being played until another quest is successfully completed, or Despair cards, which effectively require two Grail cards for each usual Grail card slot) can make the job harder.

The person to put the last Grail card wins the Holy Grail, which can heal a person who is about to die back to 4 life points.

Winning the Holy Grail quest results in 3 White Swords added to the Round Table, 7 cards to share around and +1 health to all players. Losing (where 7 Despair Cards are laid in a row) results in almost the exact opposite (3 Black Swords and -1 health to all).


Excalibur: On this team quest, the Quest's heroic action is discarding ANY one White card FACE-DOWN. This moves Excalibur one spot closer to the Green side.

The player who plays the last card that moves Excalibur to the Green side claims Excalibur which adds +1 to the outcome of any combat quest they are currently on.

When Excalibur is obtained 2 White Swords are added to the Round table; the players share 7 White cards and all get +1 Life.

The opposite is largely true if Excalibur goes to the 'Frozen' side [this happens if too many Black Excalibur cards are drawn]. 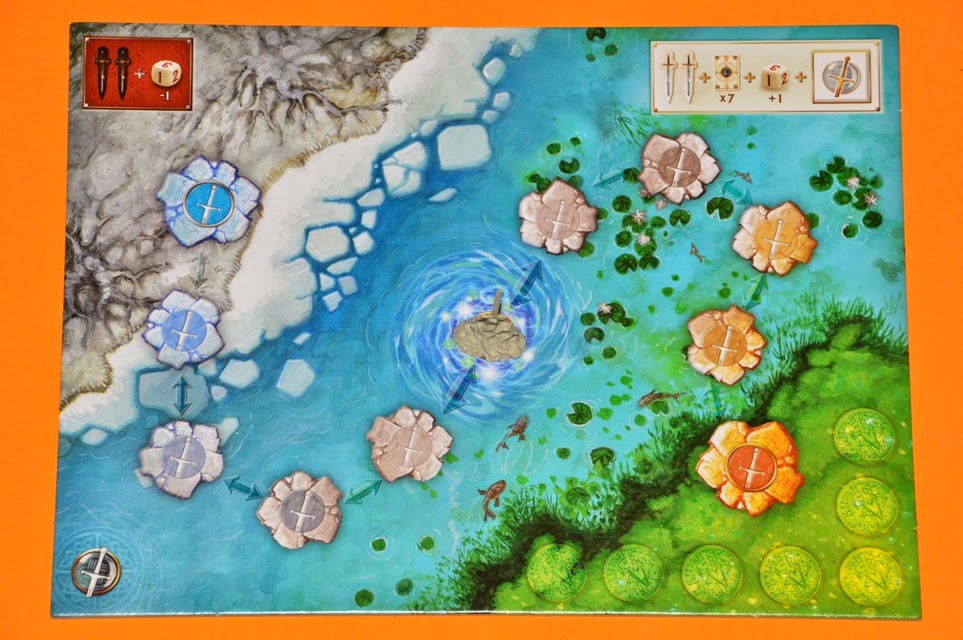 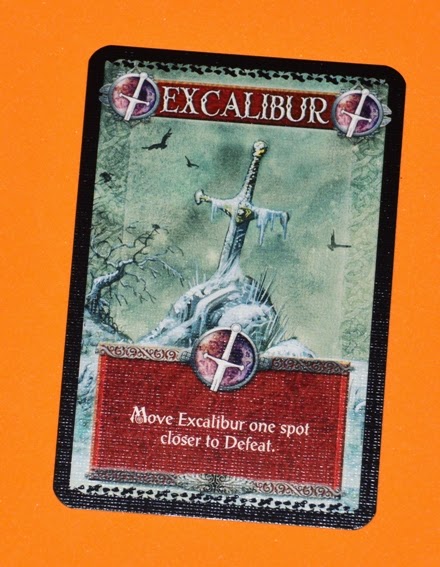 Before I talk about Solo Combat Quests here are some things that apply to ALL COMBAT QUESTS, regardless of whether they are Solo or Group ones:

Heroic Actions: Combat quests all have one thing in common: The heroic action for each quest is playing one battle card of a specified numerical value.

End: The quest ends when either all Evil or Good card slots are filled up.

"Face down" rule: For all combat quests (regardless of Solo or Group), a card can OPTIONALLY be played face down. This prevents your team mates from knowing what the numerical value of the card is and therefore arouses suspicion (because the traitor would likely, but not necessarily, play down a high Evil card and not reveal it to everyone). As a reward for doing so you get to draw an extra White card.

Ties: All ties are resolved in favour of the bad guys


Solo Combat Quests: Where only one player can do the quest

Note that, if for any reason and at any time a player leaves a solo quest, all cards played down are lost forever. 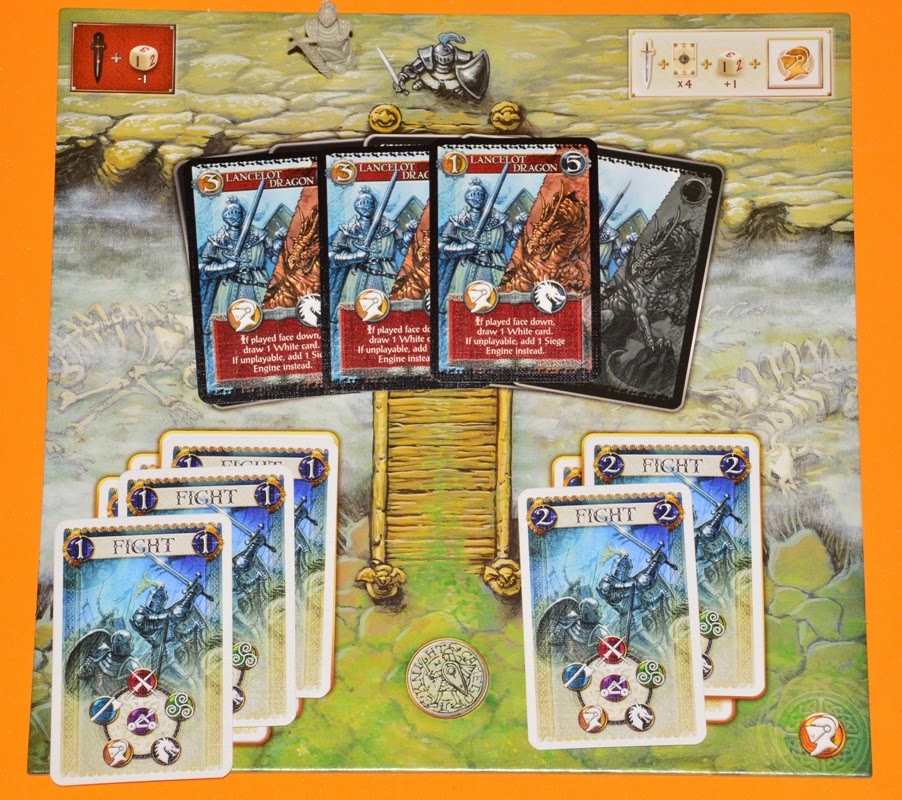 In the example above all the Good card slots have been filled up. Therefore the Quest has ended. The Black cards are revealed (if any of them were played face down).

There is a tie, so Evil wins!

The solo hero loses 1 life point and 1 Black sword is added to the table.

Winning Lancelot's quest grants the player Lancelot's armour which allows the owner to draw the top 2 Black cards and choose between the two.


Tournament against the Black Knight: More or less the same as in Lancelot's quest, except that Pairs need to be created by the Solo hero. 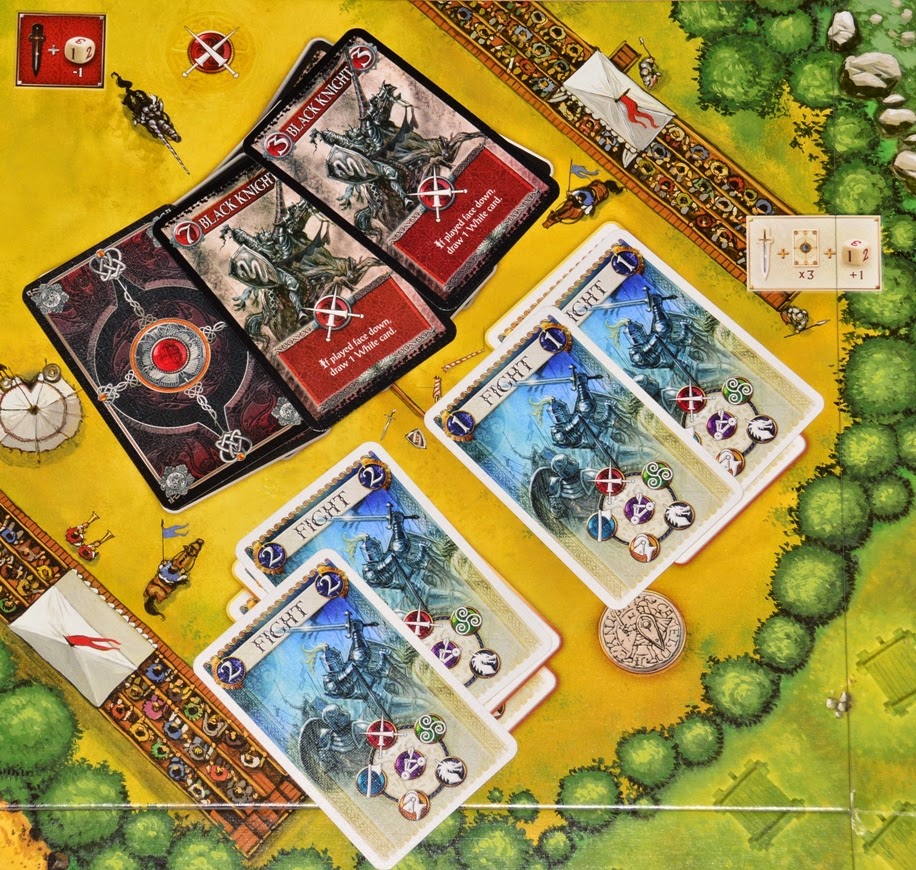 
Team Quest: Dragon Fight - this quest starts once Lancelot's quest is over.

This is largely the same as the above Solo Combat Quests with two important exceptions:

1) This is a group quest, meaning all may help out.
2) Triples must be constructed (and the sum of all their values must be > the collective dragon's sum). 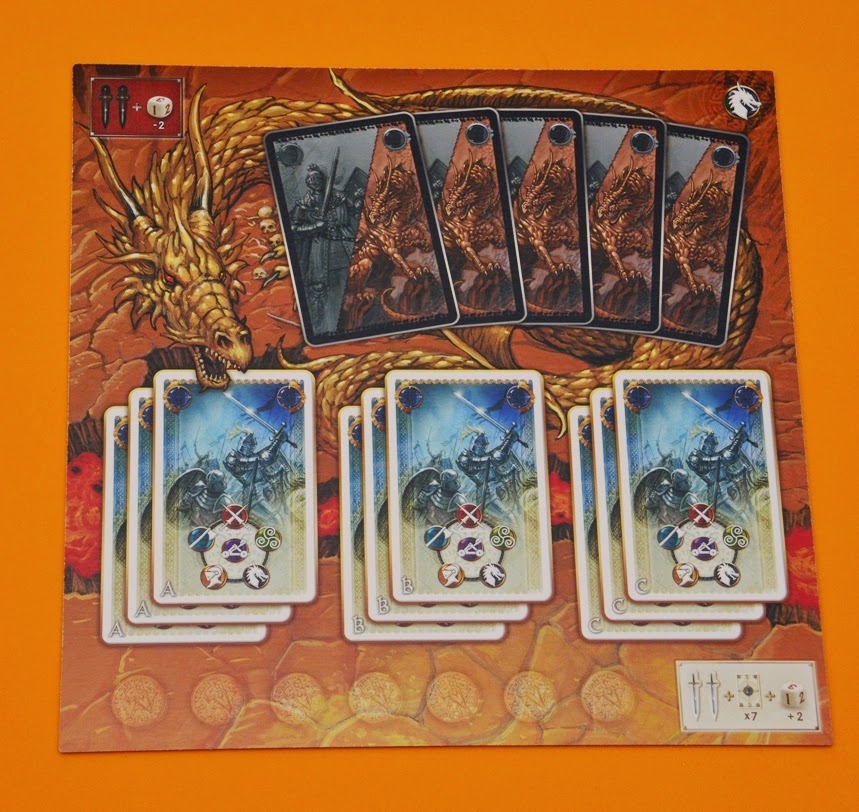 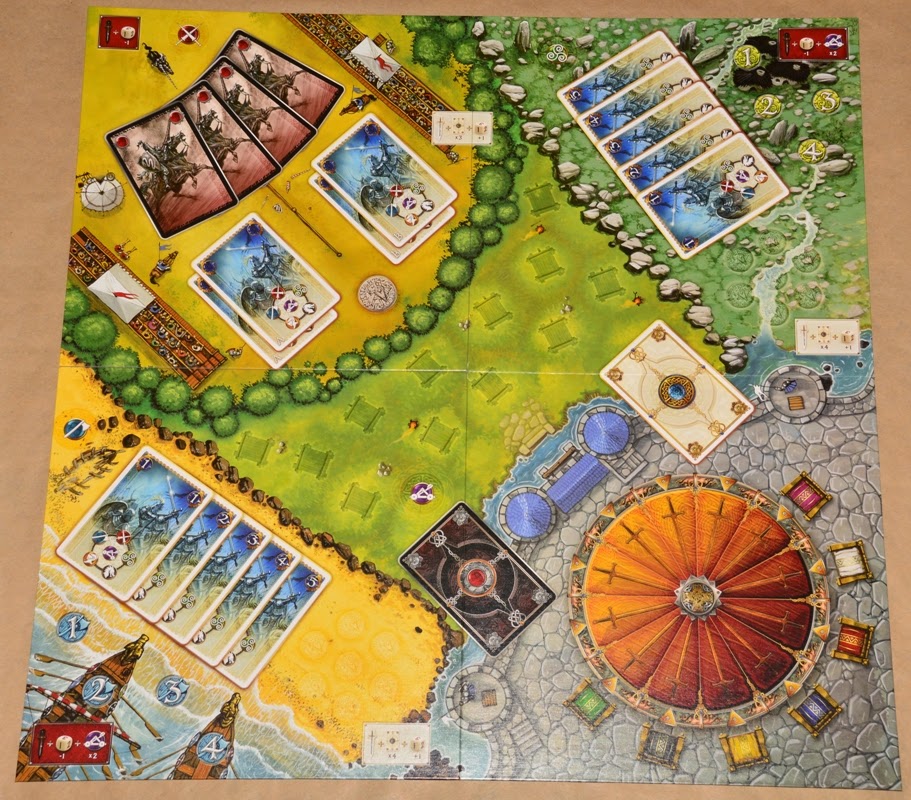 There is a lot going on in the home base at Camelot and its surrounds.

On the top left corner of the board is the Tournament against the Black Knight which I have already covered. I will deal with the rest.


Camelot: Round Table and Siege area (free travel between both)

Round Table: In the bottom right corner lies the Round Table, which is where all Knights start out. This is the ONLY LOCATION WHERE ONE MAY DRAW TWO CARDS per turn. It is also where the White and Black swords are placed upon completion of quests.

In the below example there are 3 White Swords and 1 Black Sword. 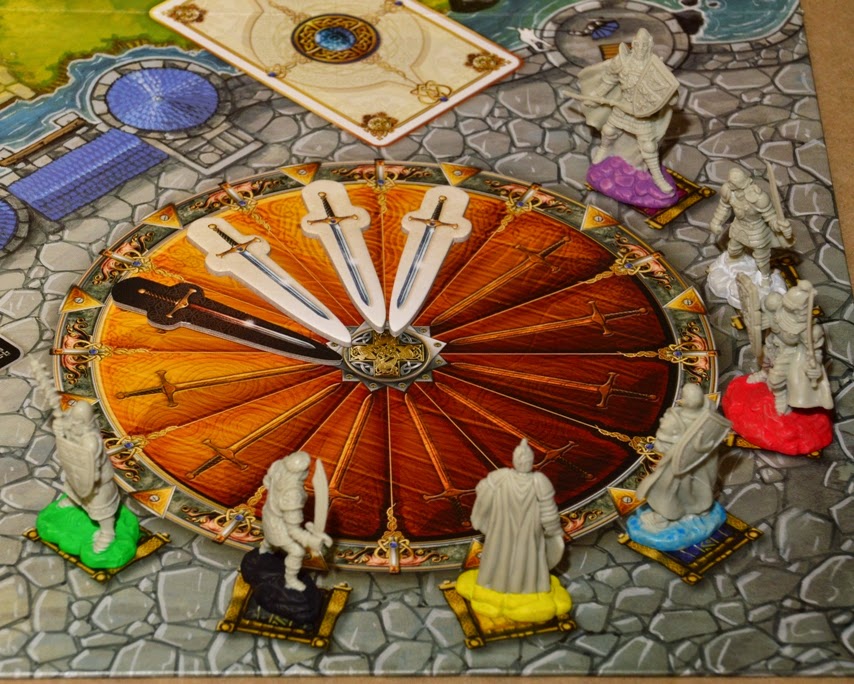 Siege Area: In the middle of the board lies the green Siege area. 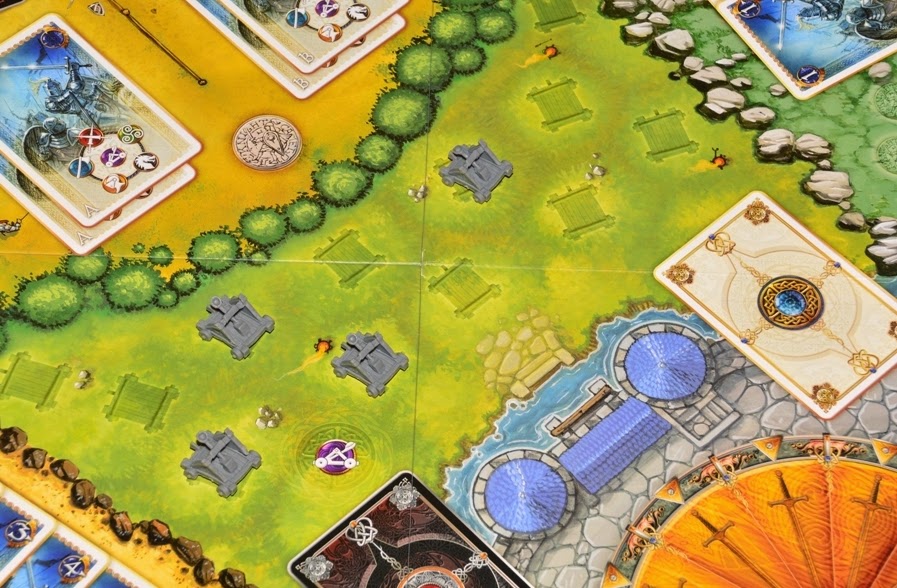 This is where Siege Engines are placed (one of the three Evil actions you can choose from). As their turn, a player can fight a Siege Engine when they are in Camelot by placing as many Fight cards down and then rolling an 8-sided die.

If the die has the greater or equal value than the sum of the cards, then the Siege Engine survives and the hero loses a life.

If it is the other way around then the Siege Engine is successfully destroyed. 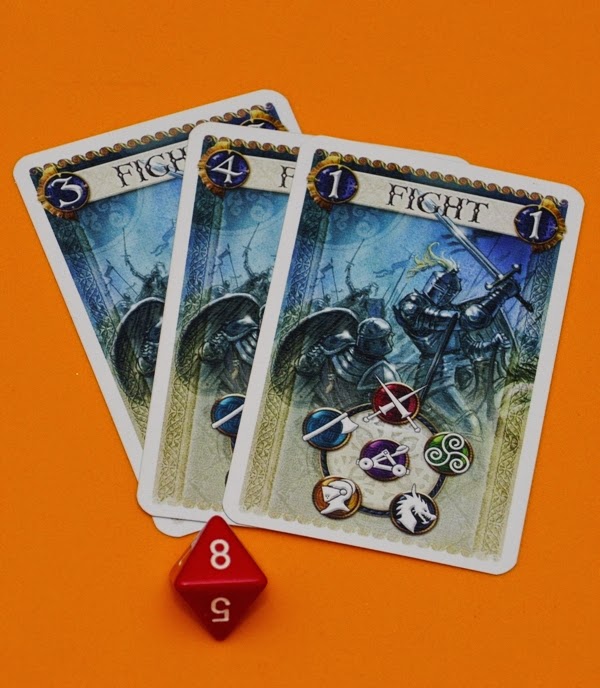 The Tournament against the Black Knight as well as the Pict and Saxon Wars must be travelled to and that act of moving there alone takes up an entire turn/good action.

Both have the same agenda: the heroes must collectively construct a straight from 1 to 5 by playing 1 card down at a time on their heroic action. The straight must be completed before 4 Saxon/Pict figurines land at the beach/hills.

If 4 Saxons/Picts arrive before you complete the straight then 2 Siege Engines get placed on the Siege area, all heroes on that quest lose 1 life and 1 Black Sword gets added to the Round Table. 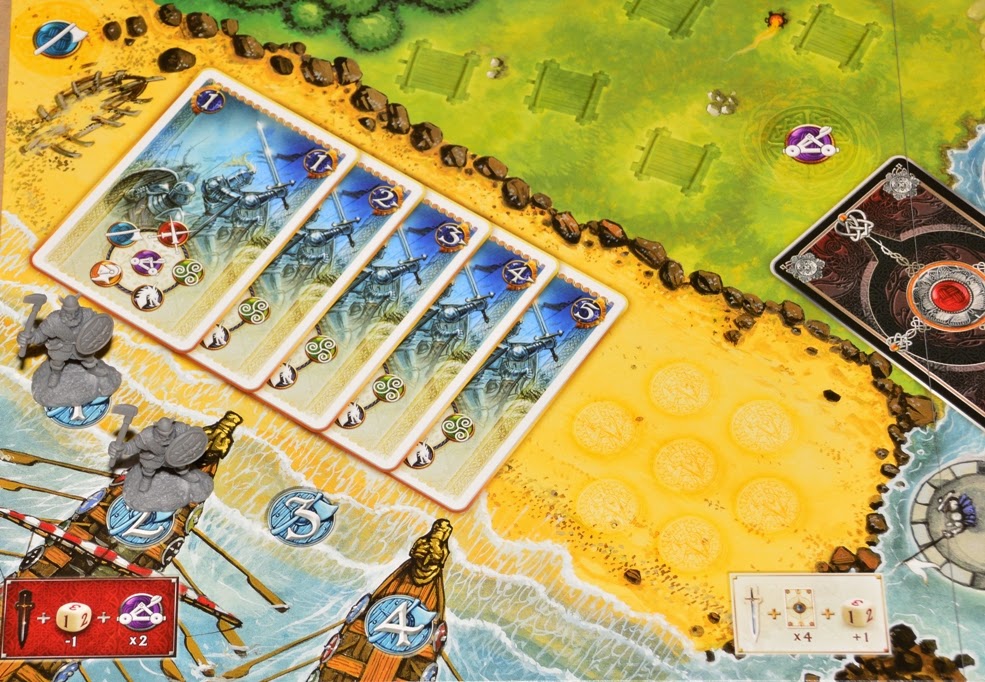 Players must never state the exact value of the cards in their hands nor what cards they have; but they may generally say whether they can help with a particular quest.

No one should ever cheat in terms of breaking the rules of the game. But dishonesty is often found in this game, to varying extents and degrees (I try not to be dishonest though, even when I am the traitor)!
Posted by Andre Lim at 15:59