I am pleased to announce that I have a new favourite game that has comfortably overthrown my previous number #1.

A distinct hybrid of Chinese Whispers and Pictionary, this is an ingenious, chaotic and crazy game well-equipped to please a crowd.

I'd like to dedicate this review to a number of people who played this game with me (and those who will play it) including: Chuen, Uel, Shannelle, Lael, Nick, Sam, Kevin, Diana, Carina, Vanessa, Chloe, Joanne, Shaun, Nimalan, Roy, Hari and Jack. 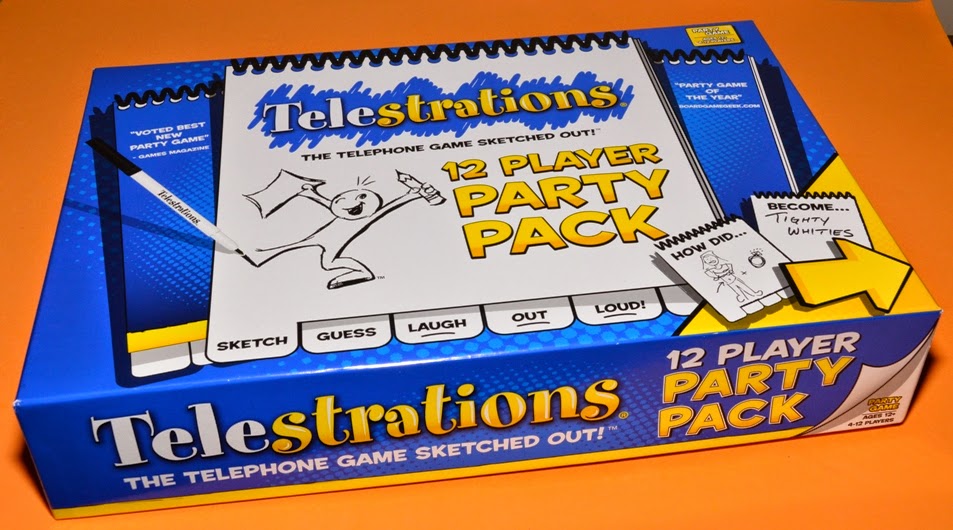 If you'd like to cut to the chase, please scroll down to the 6-Player Example below to get a quick gist of how this game operates (=

Publisher: USAopoly amongst others

Players: 4 to 8 for the original version, with the 12-player Party Pack playing 4 to 12!
The latter pack is much better as the game is best played with more people.

Time to play: 30 mins or so (depending on how many rounds you play)

Availability: Seems to be quite widely available online, but I am unsure if your average hobby game store here in Australia would stock this [though they should].

I love how creative Telestrations is, not only in terms of its gameplay but also from a game design point of view.

Whoever thought of fusing Pictionary with the concept of Chinese Whispers is truly a genius. In my view, Telestrations is the perfect example of how radically different and effective a game can be when one chooses to introduce a new and distinct concept into the fold.

To summarise the game, each player has a whiteboard notebook and selects a secret word. Then, the secret word is drawn, and this gets passed on to the next player. This next player has to, without looking at the original word, guess what was drawn. Then the notebook gets passed along again to the next player, who has to draw the word just guessed. And this continues until the notebook reaches the original player. As you might imagine, the word originally established will often turn out to be completely different to the final word guessed, though this in large part depends on how easy the original word/phrase was and the players' drawings.

I like this game a lot because it is minimalistic, in the sense of it not requiring too many rules, yet its fun factor is still maintained at a maximum. It's also a game that I feel everyone can enjoy, regardless of how bad you are at drawing; in fact, I believe a mix of good and bad artists is essential for this game because it can lead to some funny scenarios: On one hand, "good" artists occasionally place too much detail into their drawings and hence overcomplicate it for the next person trying to guess the word; whilst bad artists just muck the whole picture up in general or just have very bad ideas as to how to convey messages to people. This is often what creates pandemonium as the final word guessed is no where near the original word.

I also really enjoy the fact that certain dynamics of people make for good partnerships. For example, even though I am a messy and horrible drawer, if I sit next to someone who knows me well it is more likely than not that they will understand what I am getting at, even if it is messy. Much strategy, if you can call it that in this game, hinges on drawing to suit the person receiving the drawing. It is all about understanding your audience!

Overall I highly recommend this game to anyone. It truly thrives on people misinterpreting the drawings of their friends.

The Bad (Contrived and not genuine negatives):

What makes this game fun?
If you want a fantastic party game that is sure to produce laughs in your group, due to bad misinterpretations and/or drawings, please give this game a go!

Thankfully, the game is easy to play and easy to understand.

Have a look at the contents of the box.

Everyone also gets a card, which they should keep hidden from the view of others. Each card has a blue "That" side and a yellow "This" side. Randomly decide as a group whether everyone will be playing with the blue or yellow side. 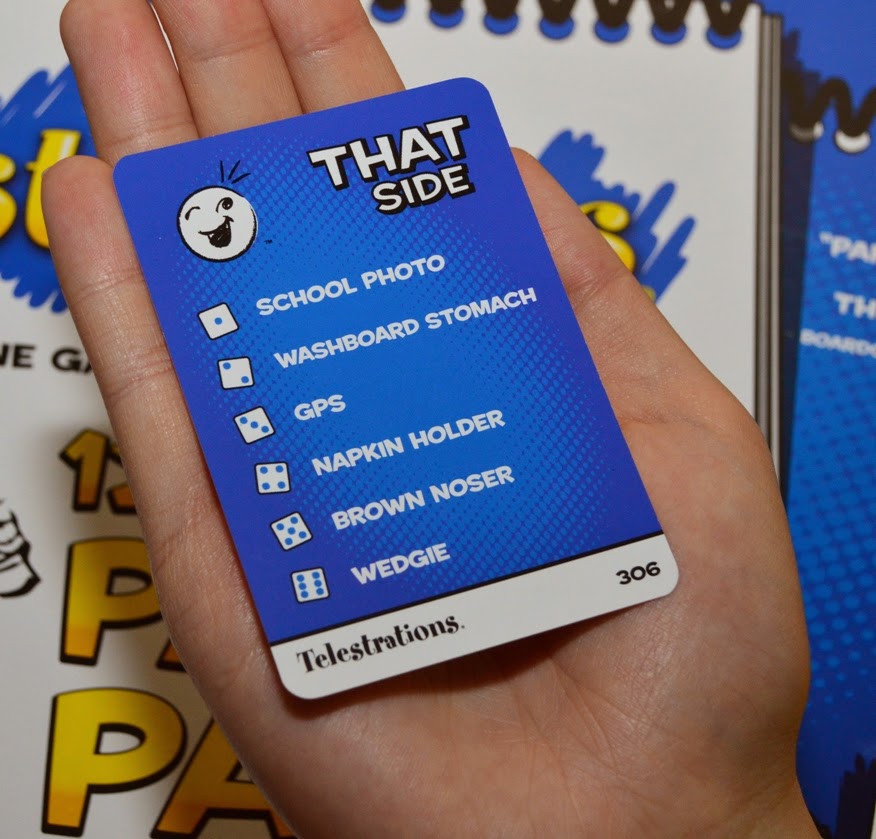 For example, in the above scenario if a 3 was rolled, the the word that would need to be drawn would be GPS.

Everyone now writes down the secret word in their notepad.

Get everyone to sit in a circle or something close to a circle (this is important).

If you are playing with an EVEN number of people, the writer of the secret word draws first and then passes their notebook to the person on their left.

In summary, what happens is that right from the very get go, everyone will have to alternate between:

a) drawing a word given and;
b) guessing a drawing given

until they receive their notebook back.

...and this continues until Player A gets their notebook back, which will end on a guess.

Now let's assume in this example that there are an even number of people playing, namely 6.

We will be tracking the progress of one player's notebook as it gets passed around the table, namely, Shaun's.

Suppose also that the secret word for Shaun is "Oral Exam":

Shaun writes this word on the first tab - the tab with the winking smiley face: 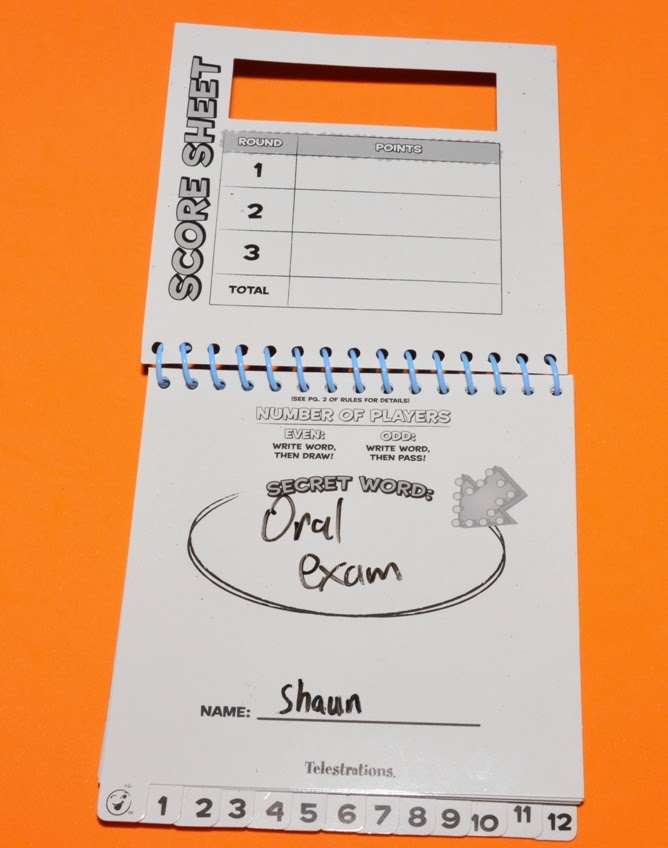 Since there are an EVEN number of players, Shaun flicks to Tab 1 and draws his secret word:

[Had there been an ODD number of players he would not draw the word first; he'd pass his notebook to the person to his left, and that person would draw it on Tab 1] 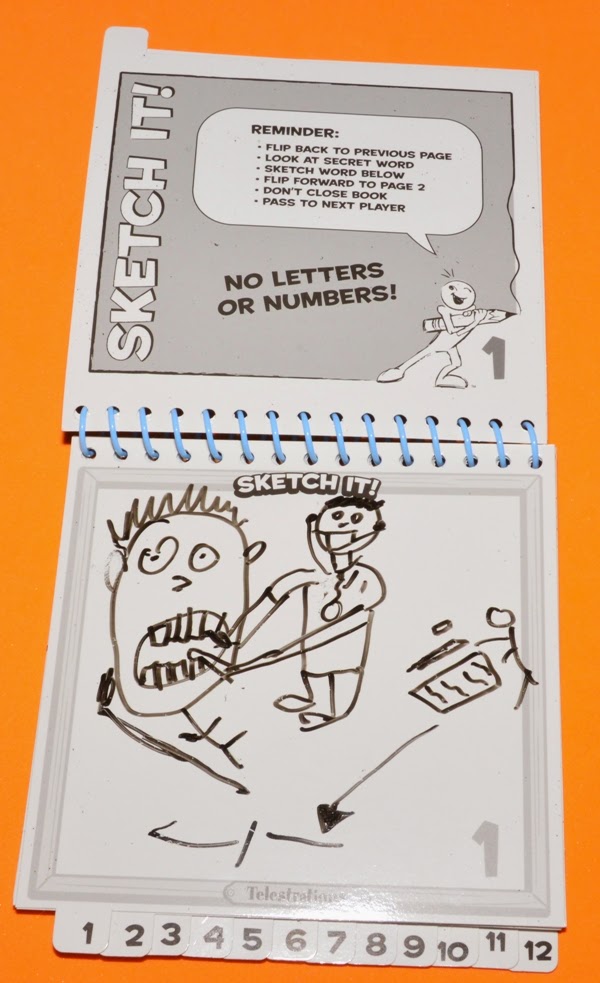 Shaun goes for an elaborate drawing - which may or may not work!

He flicks over to Tab 2, and passes it to the player on his left [this is optional - you can just pass your drawing/guess over to the next player if you want; however, flicking to the next tab is sometimes done to hide the drawing/guess from other players].

The player on his left, Chloe, flicks back to look at Shaun's drawing on Tab 1 and then makes a guess: 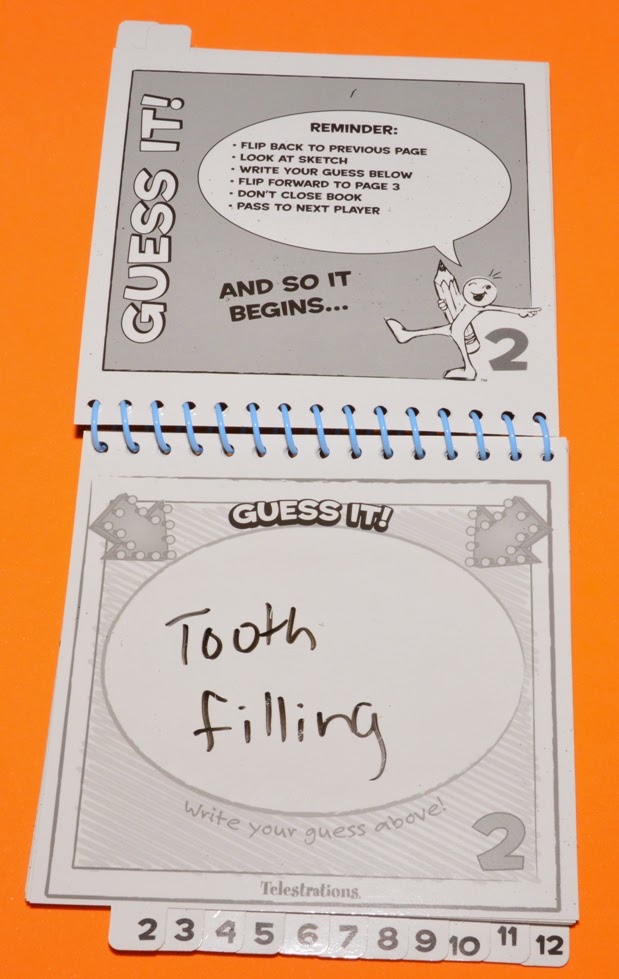 "Tooth filling" is guessed - arguably, having regard to Shaun's drawing, this is a reasonable guess. But the meaning of the original secret word has now been officially lost (hence the Chinese Whispers aspect of this game).

Now, Chloe flicks over to Tab 3 and passes it to the player on her left, Joanne.

Joanne flicks back to Tab 2 and tries to draw "Tooth Filling" on Tab 3: 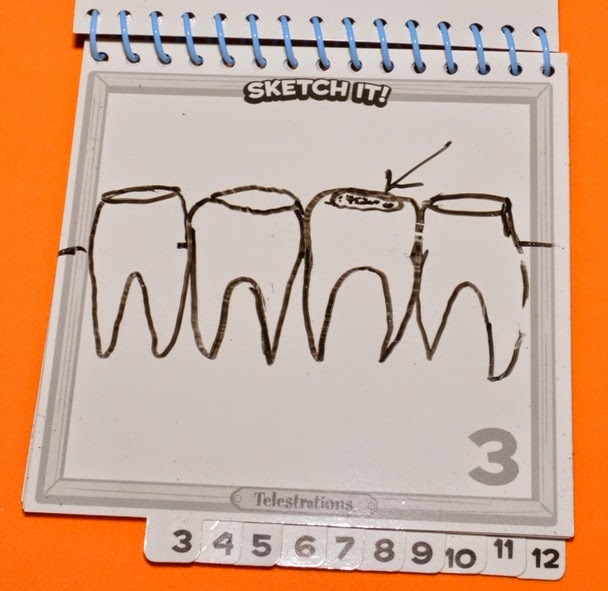 Joanne then flicks to Tab 4 and passes it to the next player.

The next player makes an unfortunate spelling typo, thus throwing this whole notebook into a completely different category. It's absolute chaos: "Plague" is accidentally guessed (as opposed to the intended "Plaque")

The notebook is passed to another player, Hari, who draws whatever he sees on Tab 4 onto Tab 5: 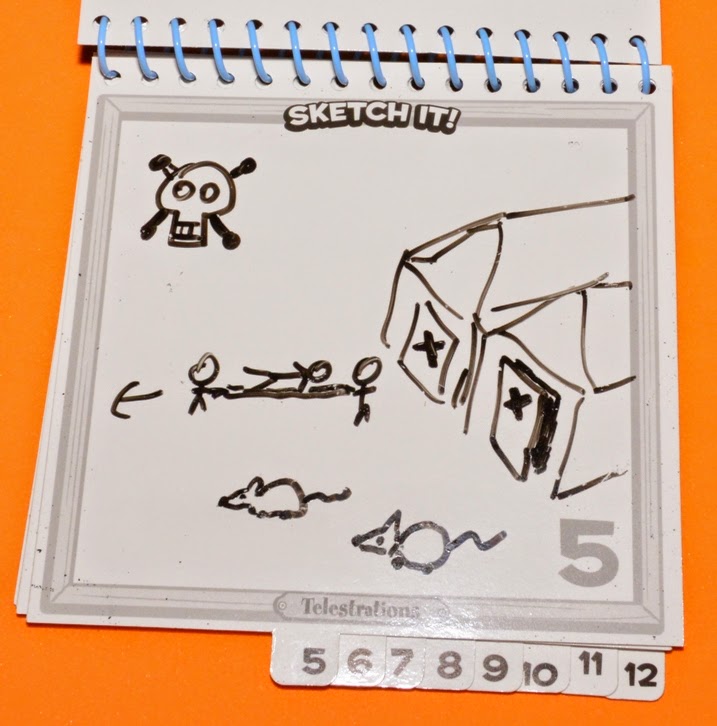 Hari passes the notebook to Andre, who thinks he knows what the picture is trying to say, especially since there are rats in the picture. He writes it down with his messy handwriting on Tab 6: 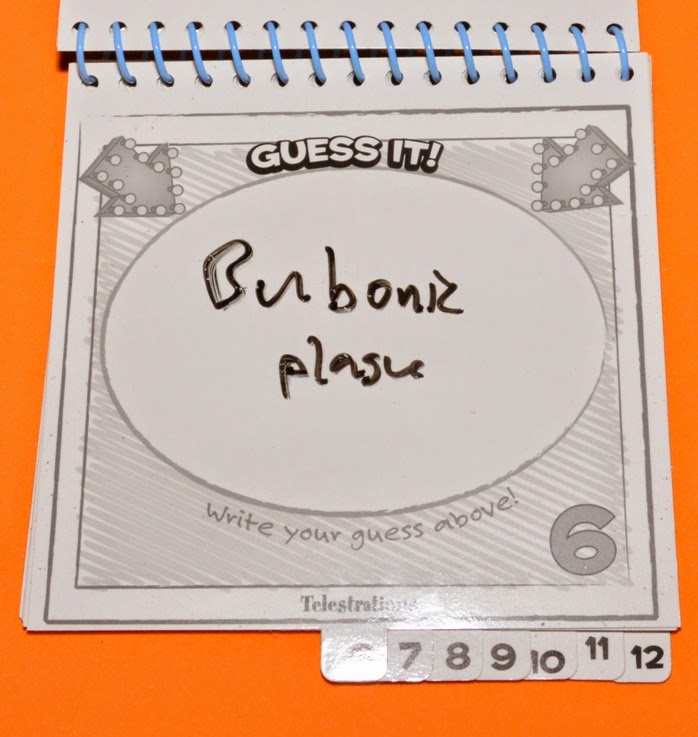 Andre is sitting next to Shaun so Shaun gets his notebook back.

Shaun wonders how on earth "Oral Exam" turned into "Bubonic Plague"... but that's just the way life is.

It is good at this point, after all notebooks return to their respective owners, for each person to go through their own book and tell everyone what happened, tab by tab.

Not using the timer

The game's rules say that a 60-second timer should be used for each tab of the game but I don't think that is a good idea as some pictures are much harder to draw than others (perhaps only use it if you are playing the competitive version I outline below under "For a more serious challenge").

I think it's best to implement a custom rule that says that everyone is allowed as much time as they want to draw the pictures. Obviously some words will be easier than others to draw, and thus it is likely that there will be a bottleneck in the production line as some notebooks accumulate at a particular person, who is trying their best to draw a difficult word/phrase. But overall this is a good rule to have as you don't want to pressure people too much, so long as people are reasonable with their time.

Kudos to Shannelle (I think) for first suggesting this when we played it =).

You honestly don't need to score in this game but the game does offer some suggestions for friendly and competitive scoring.

For example, a player holding a notebook can give points to the player who drew their favourite sketches. Or you can choose to give points if the guesser guessed the secret word [or a previous guess ] OR if in everyone's opinion a sketcher helped a guesser make a match by drawing particularly well.

Mixing the Game Up

For future games, be sure to mix it up by swapping seats with people or passing the notebook in a different direction. It makes all the difference!! Certain partnerships of drawers/guessers make for interesting combinations.

For a more serious challenge: Perhaps when you host, you can have two groups of (6?) people competing with each other - each group receives the same word or set of words and therefore it is up to each group to see how good they are at transmitting or communicating the message to their team mates. [This would be an awesome idea for a Telestrations World Championships type of tournament, with say the best artists from each country joining up together to face off against other nations]
Posted by Andre Lim at 14:34