I watched a replay of England v Russia. I will be catching the SBS highlights in another 9 or so minutes as I type this.

I'm certainly no football expert but, from what I saw, a young England outfit played a very intense attacking game in the first half. Lallana, Alli, Sterling and Walker all seemed to understand each other quite well. All this attacking flair, youthful exuberance and pace, however, counted for very little as chances could not be put away.

Eventually, the cool and experienced Russian old-heads slowly got back into the game, absorbing the English storm.

I was pleasantly surprised when Eric Dier scored from a free kick, but this was slightly offset by the last-gasp Russian header which effectively cost me 8 points in Euro Fantasy...

Interestingly, this preserves England's "record" of not winning an opening match at the European Championships.

It was also interesting to see Harry Kane taking the corner kicks. 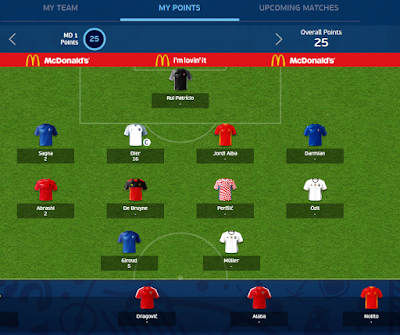 I should also add that Eric Dier made a brilliant comment here which I've highlighted below.


"Eric it's a point but does it feel like a defeat right now?"


"Yeah of course um, we're very disappointed in-- cause um, you know I think we played very well the whole game. And then to, to give away the draw like that at the end umm, yeah ...extremely disappointing..."


"...I thought we did everything right. We controlled the game, we, we played out from the back...we pressed when we needed to, we um we won the ball back, we countered. I think, I think we had it all from us but umm ..apart from controlling it at the end."

It's good to see some level-headed perspective.

Overall it was an interesting match and I'm looking forward to looking at more highlights and replays over the course of this week including this long weekend...

In other news, Colombia lost 2-3 to already-eliminated Costa Rica after changing 10 of their regular first team members.....now they may face Brazil instead of Peru/Ecuador as runner-ups. Granted, Brazil aren't as strong as they could be, but it's usually better to face the pool runner-up isn't it? The coach could rue his decision to field 10 from the bench...