The Complete Book of the Olympics (2012 Edition)

This is probably my favourite book!! 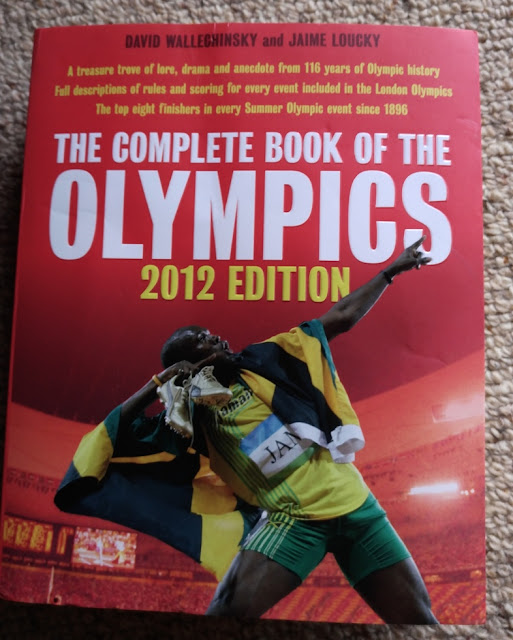 Here are all the sports covered by The Complete Book of the Olympics (2012 Edition) for Men and Women:

Discontinued sports covered are as follows: 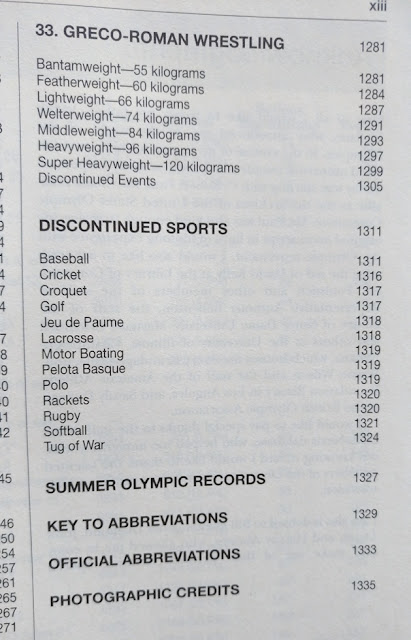 The format of each chapter looks something like this:
Short Summary

If you enjoy the Olympics, like interesting and fun facts about athletes, including the challenges faced by each Olympic gold medal winner from 1896 to 2008 (ie. for all team and individual events, including events that were discontinued), this reference book is for you.

For example, I didn't know that Steve Hooker, the pole vaulter, was actually afraid of heights and converted from Aussie Rules Football. He had to get a hypnotist to sort out his fear of heights - he would be too scared to actually vault, often simply running in-between the sticks.

I also didn't know that Cathy Freeman's mother's father was a Syrian who came to Australia to deliver camels; and one of her great-grandfathers came from China in search of gold.

I didn't realise the 2000 badminton men's singles winner, Ji Xinpeng, had to win the gold medal the hard way by defeating the top 3 seeds.....and after winning gold he never won another major tournament. Talk about a one-hit wonder.


The book's philosophy appears to be: "If it's worth mentioning, we will mention it."

The 1904 men's marathon is a pretty hilarious read, for example. You can read about it on Wikipedia, but I think will blog on it soon. Hollywood should totally make a movie on it. 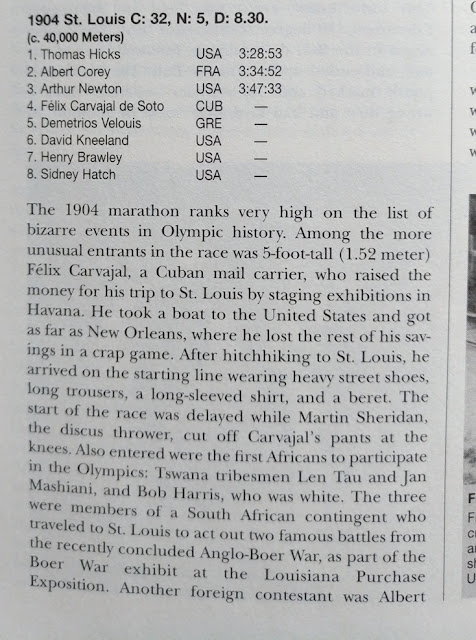 My only real issue, if I can even call it that, about this series is that apparently this 2012 edition is the last book that will be produced in the series.

There are apparently no plans to update the book to cover the Olympics from 2012 onwards :(

It would have been great to see detailed write-ups on the recent 2016 games, including, for example, Fiji, Singapore, Tajikistan, Bahrain, Puerto Rico, Kosovo, Jordan, the Independent Olympic Athletes, and Vietnam winning their first-ever gold medals.

As Mr Wallechinsky explains, there is a lot of work involved with covering all Olympic events:


"I would have to finish all the London 2012 stories, and then add in the Rio 2016 stories, where you are talking about more than 600 events.

“I would probably need to work on it for at least one or two hours every single day."

Apparently only the Winter Olympics will be covered and updated from herein on. That book is next on my wishlist, but I'm in no hurry to get it.

I have plenty on my hands right now!!