Forming part of The Resistance universe, here's a fast-paced high-stakes bluffing game to please a group of 2 to 6. 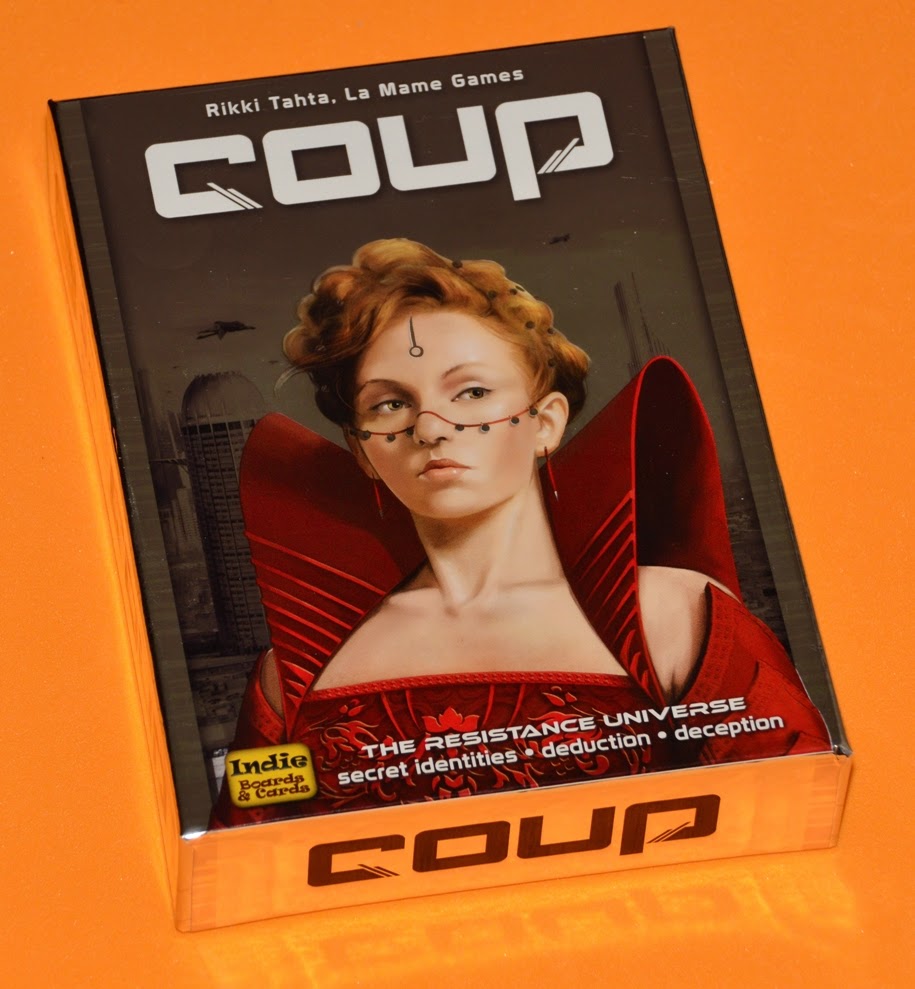 Time to play: 15 minutes for a round, possibly less in a small group.

Availability: It appears to be a top seller, being a hit in early-2013 - it should thus be quite widely available online and in hobby stores.

This is a quick-paced bluffing game that reminds me of a more complex version of the classic card game Cheat.

The general premise or theme of the game is that you are a powerful government official that controls various subjects/minions in court (when I explain the game to people though, I just say that each person represents a mafia family who wants to eliminate the other families).The aim is to get rid of your opponents and be the last one standing. Everyone starts off with 2 cards, which actually represent their 2 lives and minions.

The reason this game is so appealing and gaming-friendly is because there is quite a lot of risk, reward and some degree of strategy. There are 5 different types of characters/minions/subjects you can control - and each gives a unique special ability or power. However, the beauty and key aspect of this game is this: even if you don't have these special characters, you can claim to have them by bluffing.

For example, anyone can claim they have the Duke which is arguably one of the most used characters in the game as he provides 3 income per turn (as opposed to the miserly standard 1 income per turn). Money is everything in this game as it can be used to pay for your opponents to be killed (pay 7 coins for a definite unblockable kill - called a "Coup" - or 3 coins for a kill if you claim to be the Assassin, but can be blocked if someone claims to be the Contessa).

Another critical aspect of the game is challenging other people's claims. When a claim is made, anyone can challenge the claim. If the challenger is wrong, they lose a life. If the challenger is right, the (fake) claimer loses a life! Therefore, there is considerable risk in this game. The only way to lose lives in this game is to either a) be on the losing end of a challenge, or b) have someone pay money for one of your "minions" to be killed.

The upside of this game is seeing your friends interact with each other and trying to call each other's bluffs. You can even forge "temporary" alliances - but remember, agreements aren't binding in this game.

The downside of this game though is that a lot of play comes down to sheer luck in the sense that if you happen to be the most powerful player on the pitch (ie. if you have lots of coins), everyone will try to attack you first - this is a manifestation of tall poppy syndrome, of sorts. However, there are ways to get around this by being on the sly and being more subtle by laying down low and not being too dominating.

In a nutshell, there is enough depth, speed and variety in Coup for it to be replayable. However, there isn't too much meat for me to call this a fantastic game. It's nonetheless a great game overall.

*August and September 2014: Upon further reflection, reduced from 7.9+ on the grounds that, whilst the game is fun, it doesn't have enough substantive material (or, arguably, replayability beyond the initial, say, 15 games) for me to give this a higher score. However, by the same token, I have to take into account the fact that the game was designed with that intention of being played in a casual context and at a fast pace - an aim it has met very well - hence it still deserves a score near or around 7.5 to 7.8. Because it is so effective in a small group of people, and is a great icebreaker filler game, I think it deserves to be on the high end of that scale.

My favourite aspect of this game is the amount of double-bluffing and triple-bluffing involved - you can, for example, do things that conflict with what you actually have, and then perform a move that correspond with what you actually have. Eg You can choose to income when you have the Duke, or choose to assassinate someone when you aren't the Assassin. Then, in future games, people have this memory of you as being "this type of player" and that can affect the way they call your bluffs. In many senses, it plays a lot like poker.

Everyone gets a Reference Sheet/Summary Card. 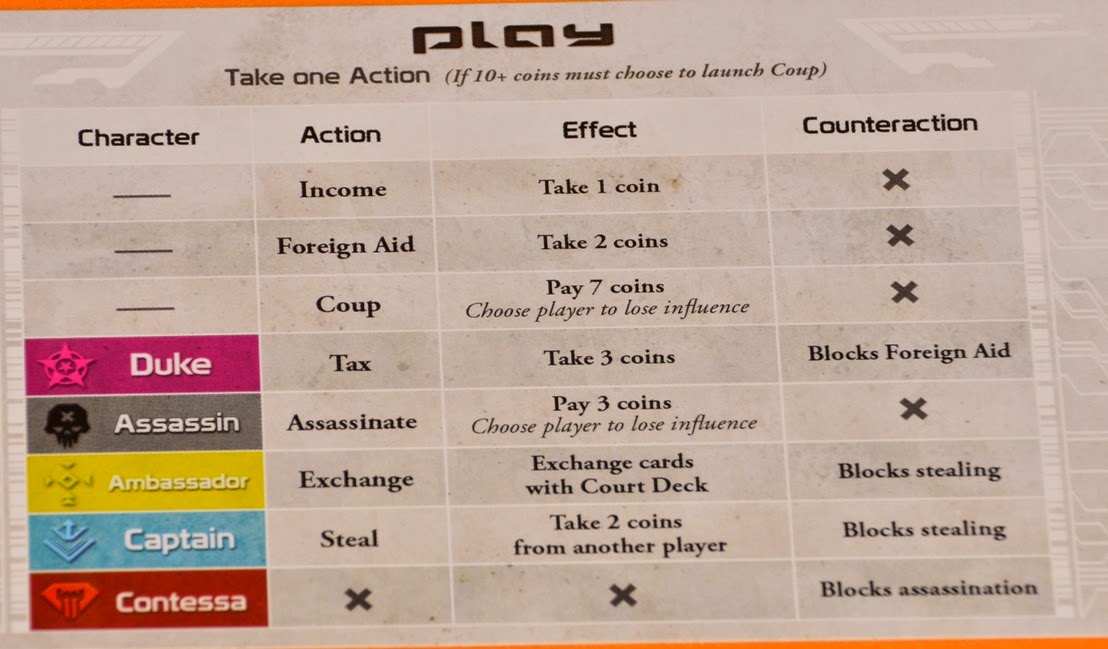 Everyone also gets 2 cards and 2 coins. Cards remain hidden and placed face down (but you can look at them of course). The rest of the cards form a draw pile (called a "court deck"). The rest of the coins get placed in the middle for everyone to access. For example, this is what a 3 player game would look like.

The face down cards are your "henchmen" or who they influence at court. They also represent your life - hence, everyone starts off with 2 lives.

On your turn, a player may only perform ONE ACTION. There are 3 "generic" actions that can be taken - these don't require a special character card.

First I will explain "unblockable" or what I call "free" actions are.

These two actions may be performed "for free" in the sense that they can never be challenged or blocked by anyone else:
1) Take 1 income coin
2) Launch a coup with 7 coins - this definitely kills off one player's card/influence/henchmen reducing them down by 1 life (note that you cannot keep hoarding coins - if you have 10+ coins you MUST launch a coup)

The last generic action is called Foreign Aid and is blockable - this allows you to take 2 coins. However, if someone claims to be the Duke, they can block you from taking the 2 coins. Hence there is a risk in taking this action (see below).

Characters can also give you special actions

However there are several other actions that can be performed if you claim to possess any of these particular characters:


Shortening speech - When claiming, colloquial language and phrases can be used. For example, instead of saying "I claim the Duke" one could say "Since I am the Duke.."

Importantly, please note that there are 3 character cards for EACH character (making a total of 15 cards in the whole game) - hence just because you have a particular character card doesn't mean that no one else can have that character.


Counteractions
When I say some actions can be blocked, this means that someone may claim to have a character that stops you from performing your action. These are counteractions. These characters have counteractions:

Challenging
When someone makes a claim, ANYONE can challenge the claim if they don't believe them (and I mean ANYONE; you don't even need to be involved in the interaction/action. For example, if X claims to be the assassin and chooses to assassinate Y, Person Z could challenge.)

If the challenger is correct, the person challenged ("the challengee") loses a life. They get to pick what card to lose and they must reveal it. (Shaun taught me this custom rule: The card lost/revealed is kept in front of them for the duration of the game. Alternatively perhaps you may want to shuffle it back into the deck to make it harder to guess what people are)

Hence there are only three ways to lose lives in this game:

For example, suppose Player X (bottom/south) claims to be the Duke and takes 3 coins as below: 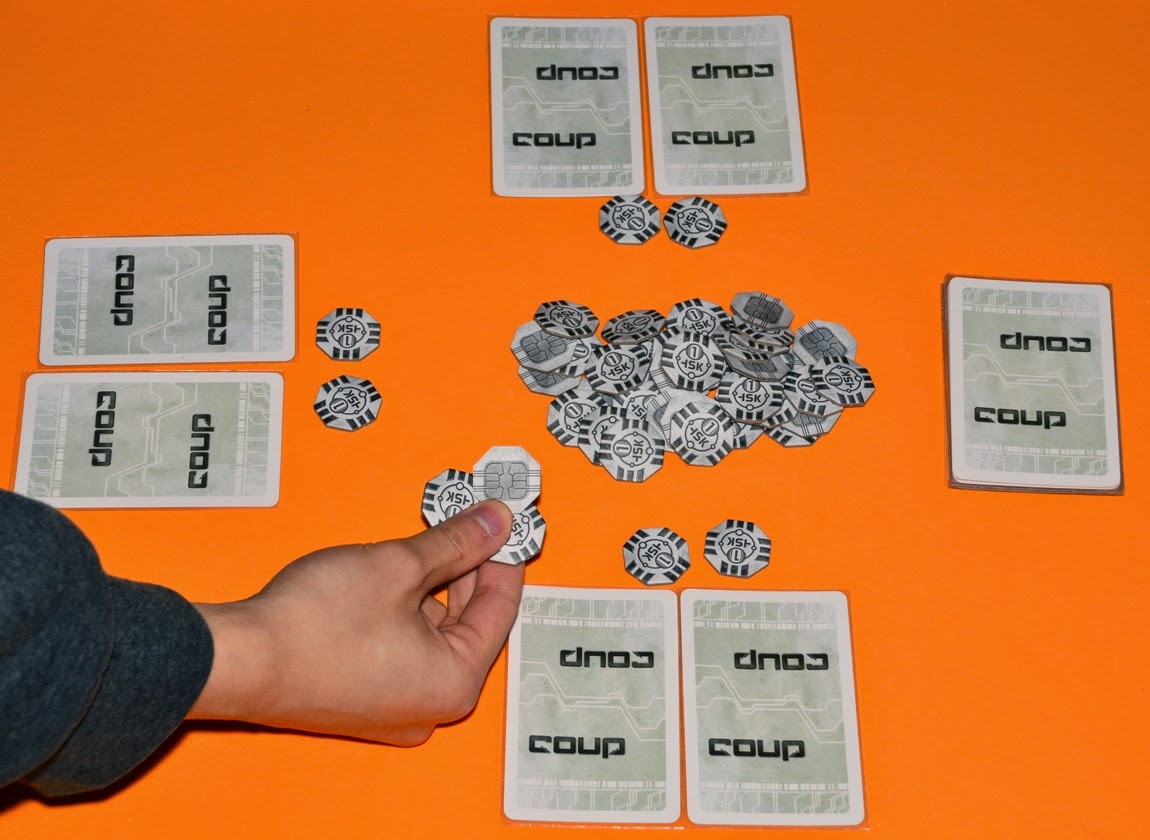 However, Player X proves that X is the duke by revealing the Duke card: 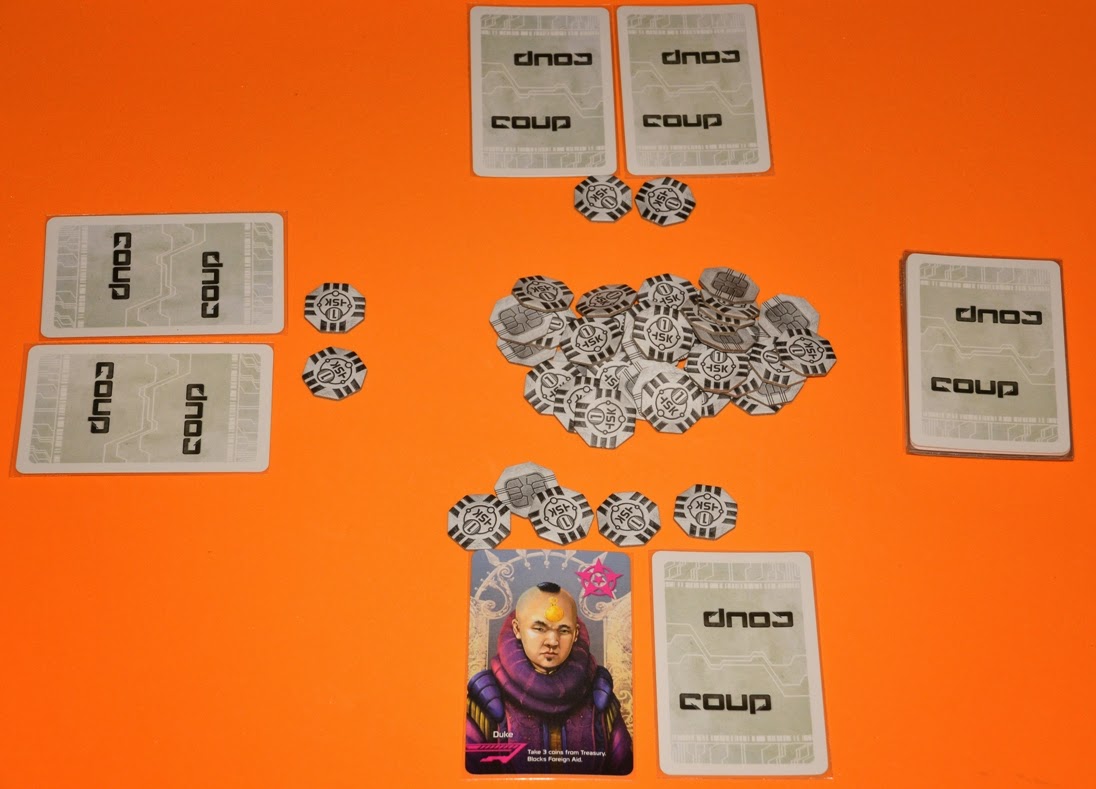 Then, Player J must lose a life. J chooses to lose her Contessa. She is now on 1 life. 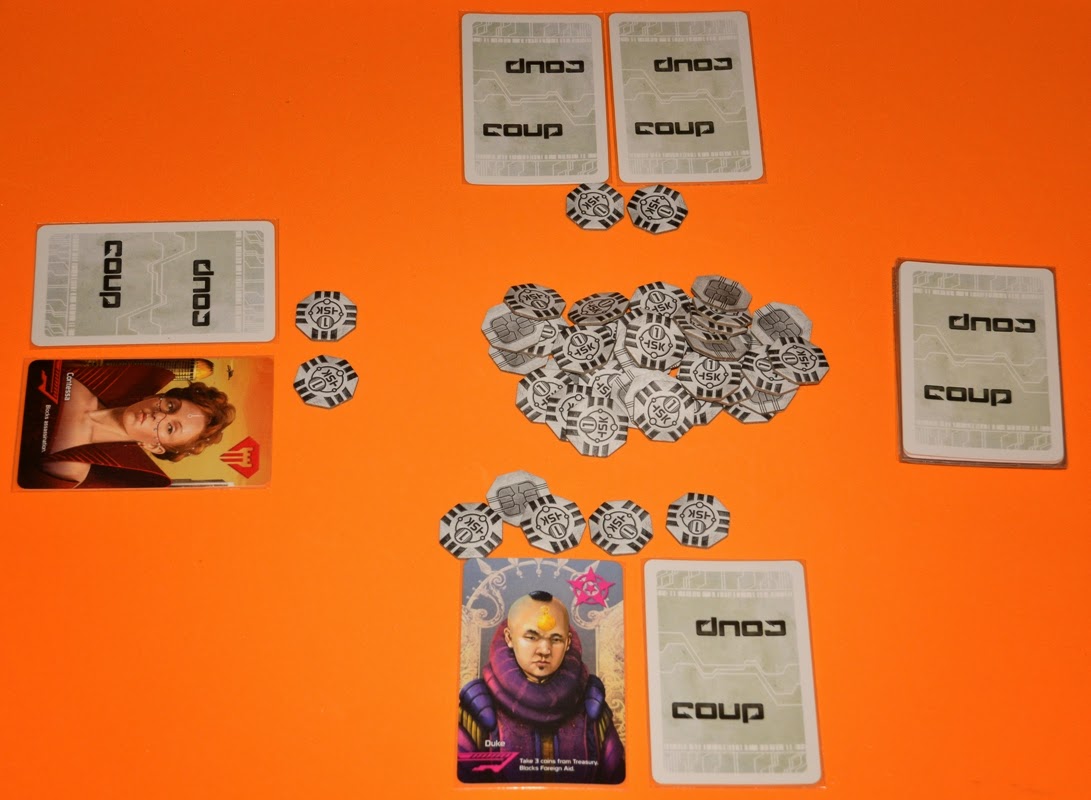 Player X now draws a new card to replace the revealed Duke card. The Duke card gets shuffled into the Court deck and a new one is drawn (the court deck includes the recently-discarded Duke card - my example below was illustrating the fact that the Duke goes into the deck): 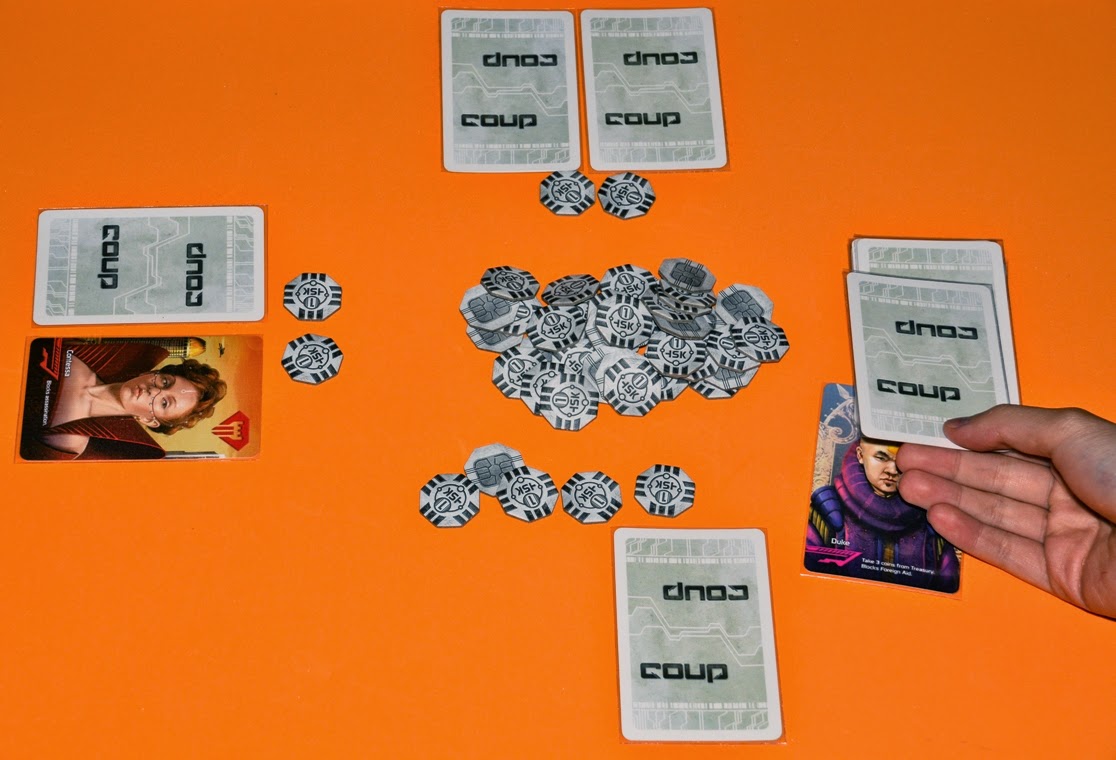 In an alternate universe, suppose Player X was actually lying. Then, Player X would lose a life (ie the captain here) and return the 3 coins 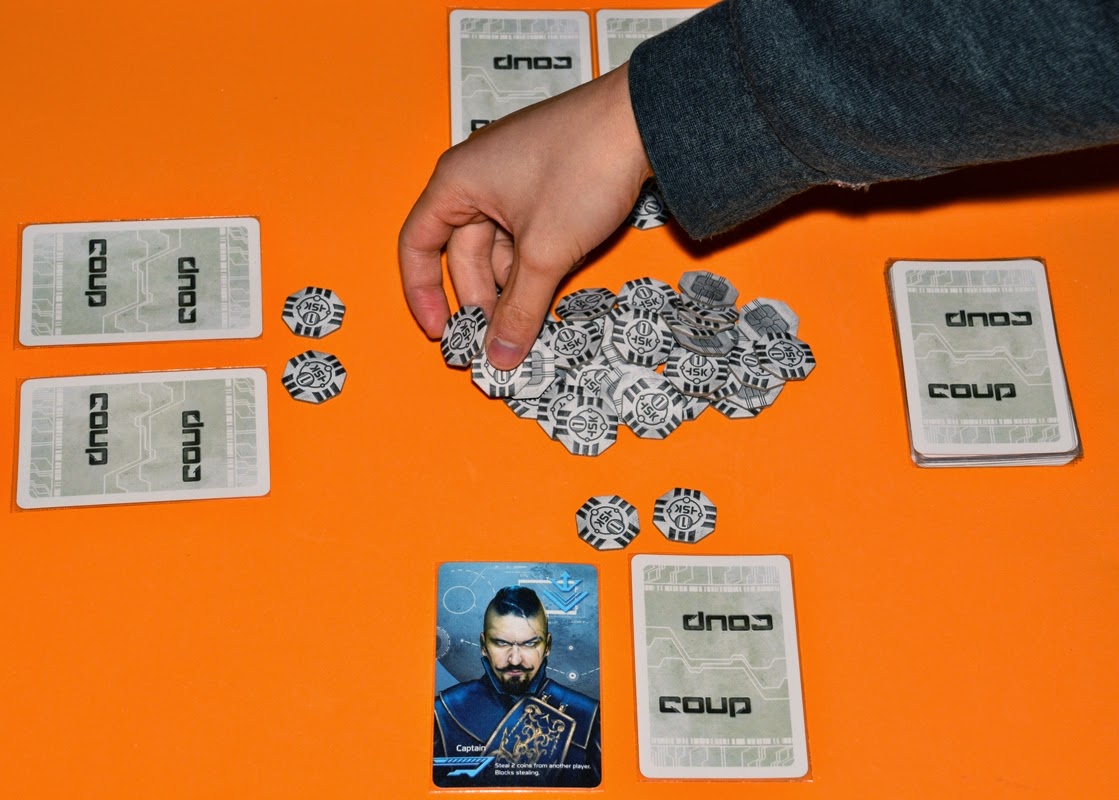 Also, do remember that whilst they aren't binding in this game, agreements can be made.
Posted by Andre Lim at 14:20