Though primarily targeted at kids, this is an interesting audio-based game that will put your listening skills to the test, albeit in a chaotic and senseless environment.

(Thus, it can be fun for adults too, with the right crowd!) 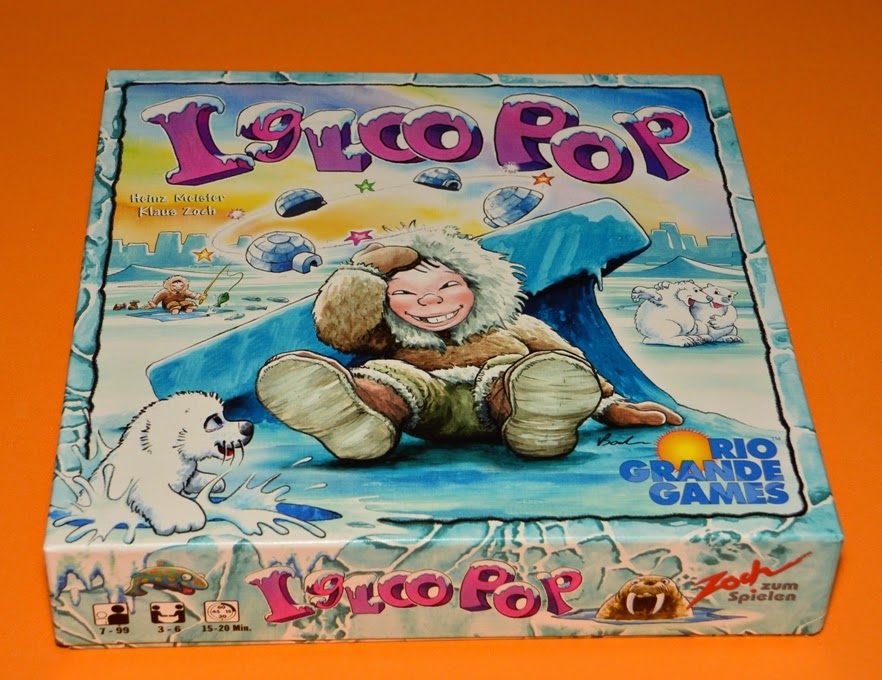 Time to play: Around 20 minutes - up to you to decide

Availability: Seems to be hard to find and my perusal of the internet leads me to believe that it is out of print!!


Random Trivia: Both the box and the instruction book provide a rather strange narrative and non-nonsensical description of the game:

The young ice giant has a big problem: he wants to buy fish sticks, but he cannot remember how many and he has nine shopping lists in his basket.

So he goes from igloo to igloo and shakes each. In each he listens to the delicious fish sticks bouncing off the igloo walls. When he thinks that the igloo in his hand has the same number of fish sticks as one of his shopping lists, he takes it home.

When he gets home, there are no fish sticks in the igloo. Instead, wild and laughing Inuit/Eskimo children tumble out of the igloo. Excitedly they shout, "Shake us again!" "That was great fun!"

"This is super", thinks the young ice giant. "Now, I have found some new friends to play with!" And, he promptly forgets all about his shopping lists.

One key thing that makes this game a good one, in my view, is its novelty - it's a game to bring out if you want to give people a surprise or to mix up proceedings. However, the type of surprise or reaction will obviously depend on the type of group you have. If you have an open minded group this game will be quite interesting to them. If you don't, your friends might find your selection too crazy!

The basic premise of the game is that there are 12 igloos, each igloo containing a unique number of beads from 2 to 13 beads. After having the opportunity to examine each igloo (by feeling their weight, shaking them and hearing the noise produced by them), players must wager or guess how many beads are inside each igloo.

They can make three types of bets - from  a risky bet that identifies the EXACT number of beads (worth the most points - 3 points) to a safe or conservative type of bet that specifies a range of numbers (with a maximum range of 2, eg. 1-3 beads; these are worth only 1 point). There is also the in-between bet, a range of 1, that is worth 2 points.

The downside of this game is obvious - it seems like a kids game and has minimal replay value (unless you take a keen interest in this genre of games). However, the game is challenging and not as easy as it seems. It provides a decent relief from other more strenuous games, and it doesn't take too long to introduce to a crowd. I quite like the game and I think it is severely underrated/overlooked.

September and October 2014: Reduced from 7.25/7.2. Whilst still a good and relatively different game, it feels wrong to give this the same score as say the innovative Hanabi, which is a game that I would consider to be the benchmark of the 7.25 score. It is wacky/different enough for it to be above 7, but perhaps not much more.

If you're after something amusing or an "icebreaker" game in between other games, try this audio-based game that operates as a temporary crowdpleaser in the right environment. It probably boasts a higher success rate with children and families though.

Everyone gets a set of 10 betting tokens of their chosen colour - these are called thalers.

Minus the distribution of thalers, this is how the game is set up:

Before your first game, the igloos shown here must be set up manually by inserting the right number of glass beads into each igloo. They must also be labelled UNDERNEATH with the appropriate number from 2 to 13, the number reflecting the quantity of beads inside them. There are 12 igloos in total and the base of the igloos must be sealed tightly.

The youngest player counts to 3. On 3, each player simultaneously takes one igloo village of their choice and shakes it WITHOUT LOOKING AT THE BOTTOM OF THE IGLOO (as the bottom has the answer).

If they want to, a player may place a betting token in the igloo and then place it on a card of their choice. You may only use the cards available in front of you.
Each card has different numbers on it as demonstrated below:


As you can see, there are three types of cards: those with only 1 number; those with 2 numbers; and those with 3 numbers.

These represent the range of beads that players think might be in the igloos.

Scoring: begins when all the igloos are placed on a card or if no one wants to place any more igloos on cards

There is a very basic rule with scoring: If you guessed the number right, you always get your thaler/coin back.

If you get it wrong, you lose it forever.

If there is only one igloo on a card, this is straightforward - if the person got it right they get their thaler/coin back and the card too.

Cards are always kept for scoring purposes, as the number of eskimos represents the number of points one gets. If they get it wrong, they lose the thaler forever and the card remains where it is.

If there is more than one igloo on a card, the person who placed the thaler in the highest (correctly) numbered igloo wins the card. Everyone else who correctly guessed the numbers on the card gets their thalers back.

Whoever guessed the number wrong must give their thaler to the winner of the card - these thalers of different colours are used for scoring purposes by the winner of the card and cannot be used as future bets. If this rule is too confusing (but it isn't really) or if you think it's a bit unfair (it kind of is, in the sense that you don't always get to choose the higher-beaded igloo), you can ignore it. 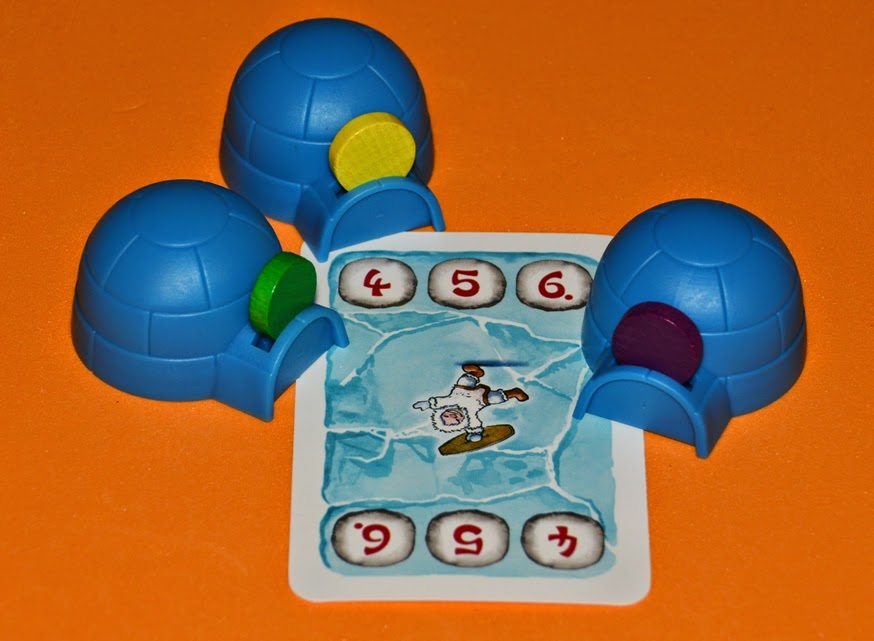 Suppose these bets were made by Green, Yellow and Purple above.

On scoring round, we discover that Green is wrong as 11 does not fit into the range of 4-6.

Purple and Yellow are spot on as they are both within the range. However Purple gets priority for betting on the "6" Igloo so wins the card and also gets their vote back.

In addition, because Green got it wrong, Purple wins Green's token for scoring purposes (worth 1 victory point in the end).

The game continues until one of these conditions is met:

1) one or more players has no more coins to bet with left OR
2) there aren't enough cards left for 9 cards to surround the igloo village.

Each player adds the number of eskimos present on cards + the number of thalers a player has to give their total score (victory points).  Whoever has the most points wins.