King of Tokyo: Power Up! Expansion

A new twist to the King of Tokyo, with super powers and all 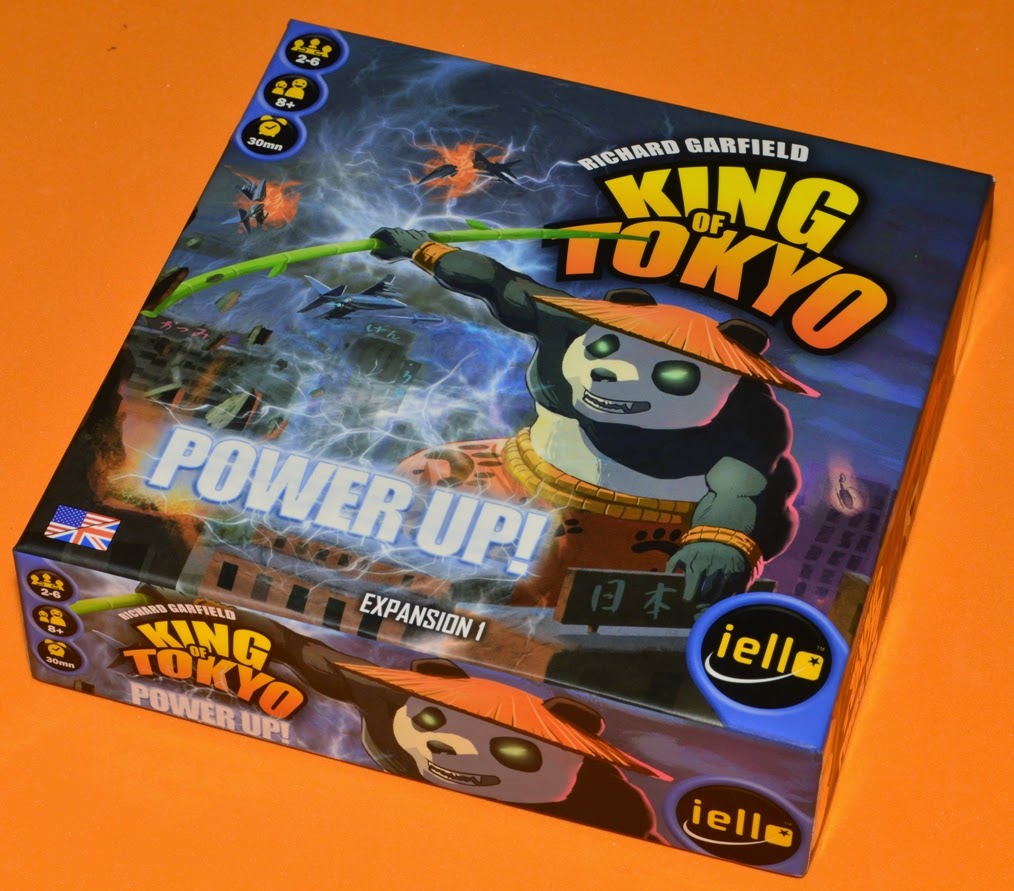 Availability: Should be available at good hobby game stores and online

The primary kicker to this expansion is the fact that each monster in the original game finally gets their own set of "super powers" and playing styles through the introduction of the new evolution cards. These can be selected upon rolling three hearts at any time, even when in Tokyo. For example, one cool super power The King can now receive is "Twas Beauty Killed the Beast" which lets The King get 1 star after every player ends their turn when in Tokyo - but it has an interesting risk factor as, if The King leaves Tokyo, he loses all his points.

However, the downside is that many of these powers seem a bit trivial and not as strong as some of the others - in that sense, and I'm sympathising with the designers here, it is always difficult to ensure that there is a level-playing field between all the monsters and you can see that here with this expansion. But that doesn't necessary detract from the fun of the game. For example, some of the powers that allow particular dice rolls to give an extra turn or power, whilst fun and imaginative, aren't always practical

Of course, having the ability to play with 1 extra player is always fantastic when you need to accommodate that extra person - but the downside, again, as stated in my original write up for King of Tokyo is that I think this detracts from the game in that there is a long time taken in-between turns.

I must say something about the price of this game. For what you pay this is a little on the expensive side - I know I am being a bit precious as I've said the same thing for The Settlers of Catan: 5-6 Player Extension, but that's just me: I want value for money, which is presumably what everyone else wants. I always have this nagging thought in my head: "If you don't buy those two expansions and/or extensions Andre, you could get another game with that price." Heck, Mascarade and Coup, both fantastic games, are available for between $20 to $29!

The opportunity cost of an extension/expansion should always be considered before purchasing it. Ask yourself: "Can my money be better spent elsewhere?" The general, and obvious, rule is this: purchase only if you really like the original. This one is a bit borderline for me. On balance, I would say "Yes" as I liked the original game.

Should you get it?

Sure, it's a decent expansion - get it if you love KOT otherwise it might not be that necessary.


- This concludes the basic overview of the extension.
If you are interested in reading about the components please read on -

Not including the rulebook and promotional brochures, this is what you get from the box: 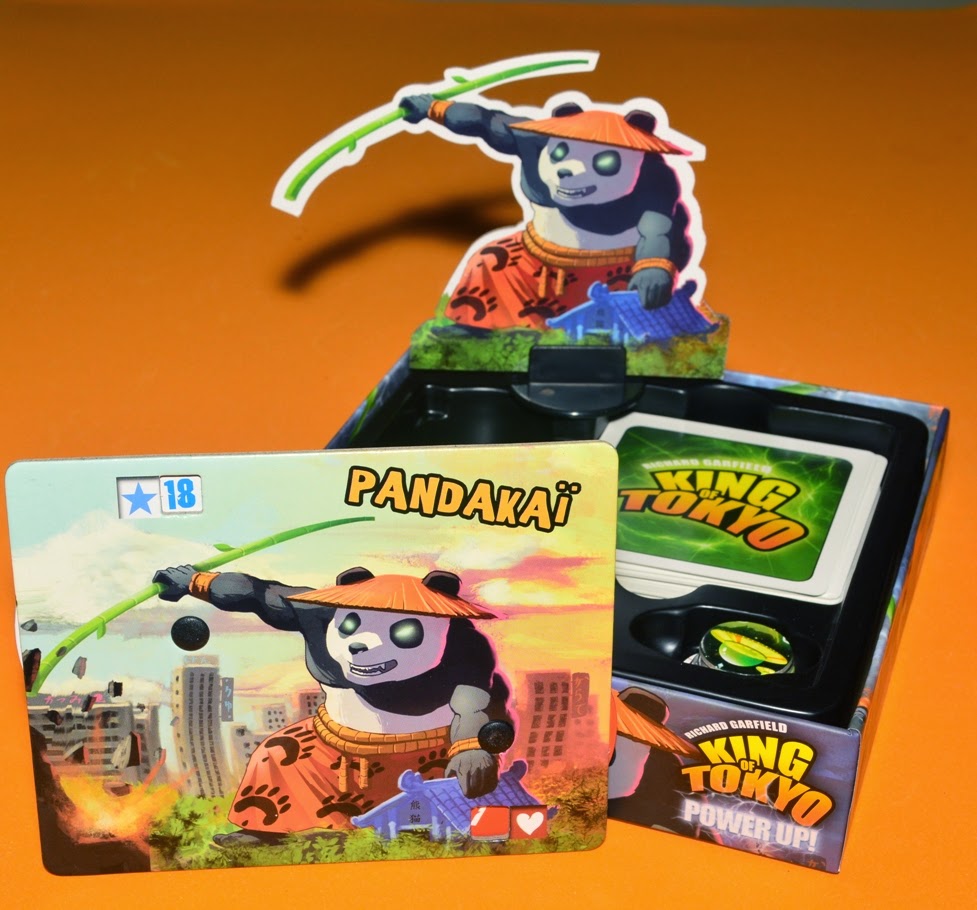 That is, you get: a pack of evolutionary cards, some tokens relating to special abilities from those cards as well as the Pandakai figure and the Pandakai health/score board.

There really isn't that much in this expansion. The cards do make a substantial difference to gameplay though, although you do have to roll 3 hearts to choose an evolutionary card - which isn't always easy. Each monster gets their own set of super evolutionary cards unique to their monster.

One variation of the rules says that instead of just choosing the top card on the evolutionary deck, you can draw two cards and then pick one of them - this is probably the fairer approach and gives players more options.

Some cards are "Permanent" whilst others are "Temporary" evolutions - the latter can only be played once. However, the former name can be deceiving because this is not necessarily true all the time; I haven't checked all the cards but, for example, one of The King's permanent evolutionary cards must be discarded once Tokyo is left ('Twas Beauty Killed the Beast'). 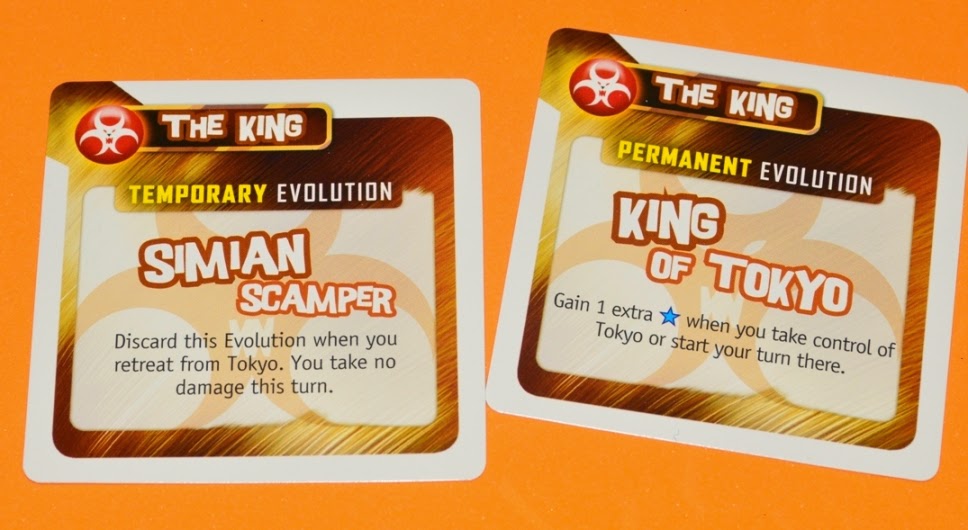