What a fitting description for this lovely laugh of a game. 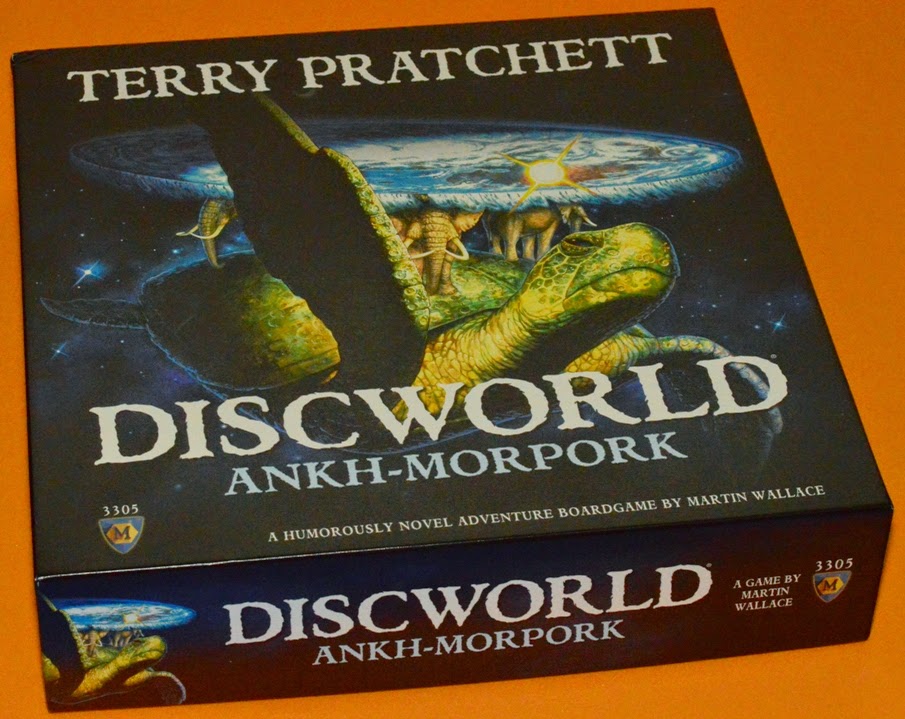 I'd like to thank my friends Hari, Nimalan, Roy and Jack for getting me this game for my 23rd birthday last year. It was a fine selection on the part of Hari as I quite like its novelty and the angle it takes.

Publisher: Mayfair Games (other publishers include IELLO or KOSMOS)

Time to play: 60+ minutes - this is about right as the game takes a bit of time.

Random Trivia: Apparently you'd understand the gameplay and the cards a lot better if you read the Discworld novels. I hear that Terry Pratchett has quite the reputation for wackyness.

Availability: Available in hobby game stores and online - quite a "well-known" game.

I like this game because it mixes elements of wackiness and randomness with standard gameplay found in light strategy board games (area control). The artwork is also quite superb and complements the game design fairly well. I only wish that I knew more about the Discworld series as I feel that I would benefit a whole lot more from the experience.

The best part of Discworld: Ankh-Morpork, in my view, is the hidden identity that each character receives. This makes or breaks the game and converts it from being an interesting (but relatively normal game) to something quite different. All players are potentially vying for different objectives (but not necessarily, as 3 of the 7 available characters have the same aim of trying to control X number of territories). This, to some extent, adds a psychological element to the game as your opponents are trying to figure out what your real aim is. Sometimes this will prove to be obvious, but there are moments where no one knows what you are really up to. You can disguise what you do as well...

...However, one related and big downside of this game is that your actions are, to a very very large extent, affected by your hand - thus you might not even be able to carry out your hidden character's aim if you have a 'very bad hand' or if your opponents possess some really extreme or imbalanced cards. In that sense, the strategy of this game is there but is quite limited. This is one of the main reasons why I wouldn't score the game an 8, though I was tempted to do so. Not that having luck in your games can't give you an 8/10 of course (see Ticket to Ride, where drawing cards is pretty much riding on luck); rather, it is the fact that I feel that your options as a player are limited when you have to play a certain way because of the hidden identity you were given. This detracts from this game in the sense that I feel the game "could have been better". Nonetheless, I should remember that this game is meant to be for laughs only; therefore, for what it is, the game is certainly fun.

There aren't too many other real downsides to this game apart from it being a longish game and the fact that most of it comes down to luck - but this latter problem isn't really an issue if you don't mind some raw fun. Gameplay in itself is very simple - just play as many cards as you are allowed and then draw back up to 5.

What makes this game fun?
If you like novelty and a game that is something different with some mild strategy, you should give this game a go...especially if you are a Discworld fan.

The board is set up like so, with 1 trouble marker and 1 minion of every colour in play placed on each of the following three regions: The Dolly Sisters, The Scours and The Shades.

Everyone receives a hidden identity card, 10 coins and a hand of 5 cards.

Thus this is what a two player game looks like:

One of these 7 hidden identity cards are given: 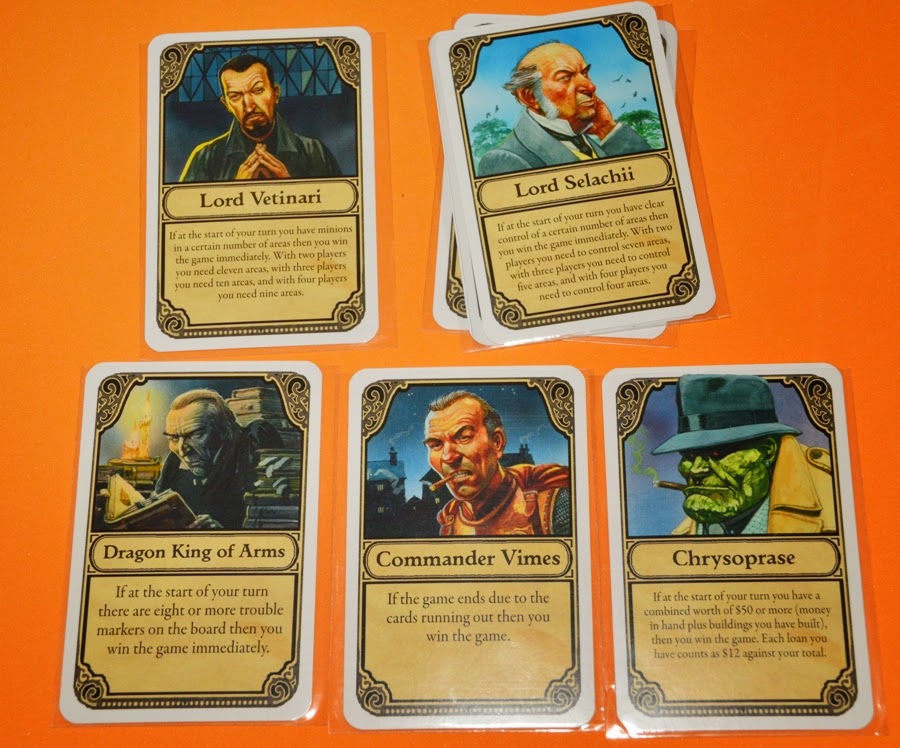 Each has a different victory condition:

[The game explains that, although Vetinari has disappeared, his spies could be spreading around the city, ready to pull the levers of power for their master]

2) Lord Selachii, Lord Rust and Lord de Worde all share the same aim: You win if at the beginning of your turn you control Y number of areas. Control of an area means to have more playing pieces than any other player (a playing piece being a minion or a building). Y = 7 in a two player game; Y = 5 in a 3 player game; Y = 4 in a 4 player game.

This is the standard area-control victory condition that you are likely to be dealt with.

3) Dragon King of Arms: You win if at the beginning of your turn there are 8 trouble markers on the board [as the city has fallen into chaos and the people want their king back]

4) Chrysoprase: You win if at the beginning of your turn your net worth (which is your cash + monetary cost of each building you have) is $50 or more, less $12 for any loans you have taken out. Not for a 2-player game.

5) Commander Vimes: You win if nobody else wins by the time the draw pile has exhausted

If nobody has Commander Vimes and the draw pile runs out there is an alternate scoring method which I won't go into (cash and buildings are worth points etc).

Turn play is very simple. You usually play 1 card and draw back up to your hand of 5. However, this is not necessarily the case as some cards let you play another card after playing it. The general rule is therefore play as many cards as you want, so long as the cards instruct you to.

Cards have symbols on them and they tell you what to do, as shown by your player aid:

Green cards are used during the first half of the game (roughly) whereas Brown cards, which are more powerful, start to appear when the draw deck has run out by about halfway.

Here are what some of the cards look like just to give you an example.


For example, if I played the Royal Mint card on my turn, I would receive $5 (because of the coin symbol with $5) and build a building (because of the building symbol). In the example below, I build on The Hippo which grants me the ability to take $2 every turn from the bank. 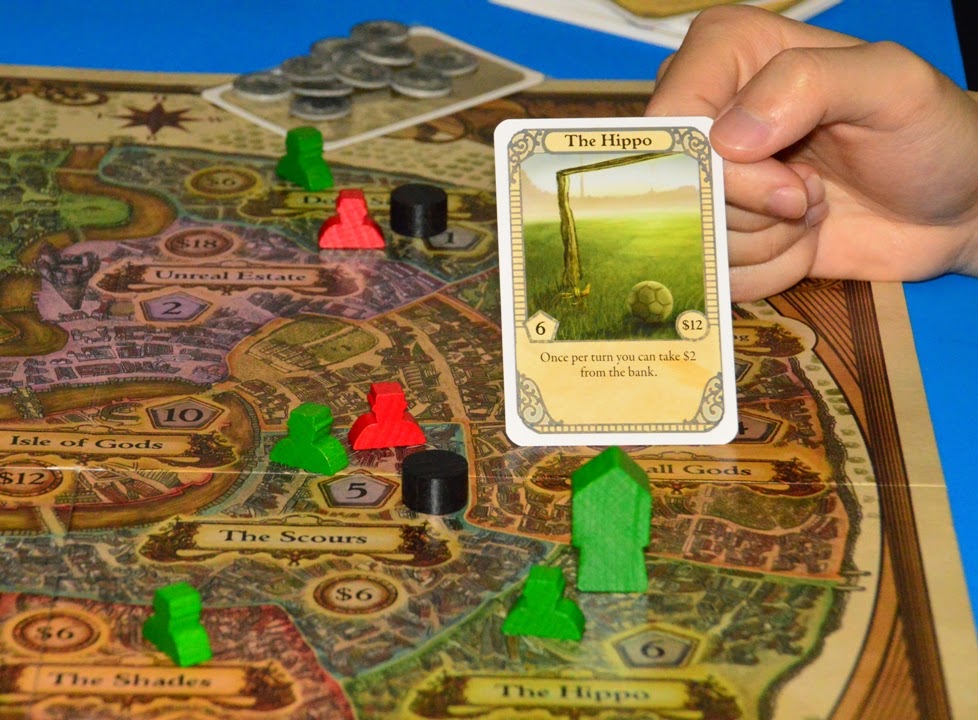 Examples of other Property Cards available to you: 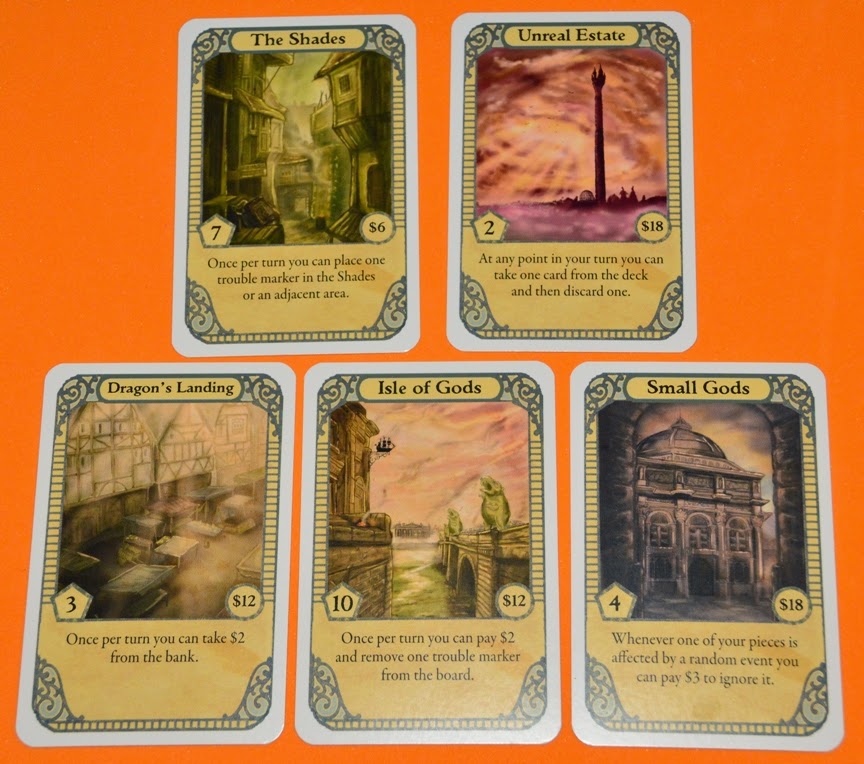 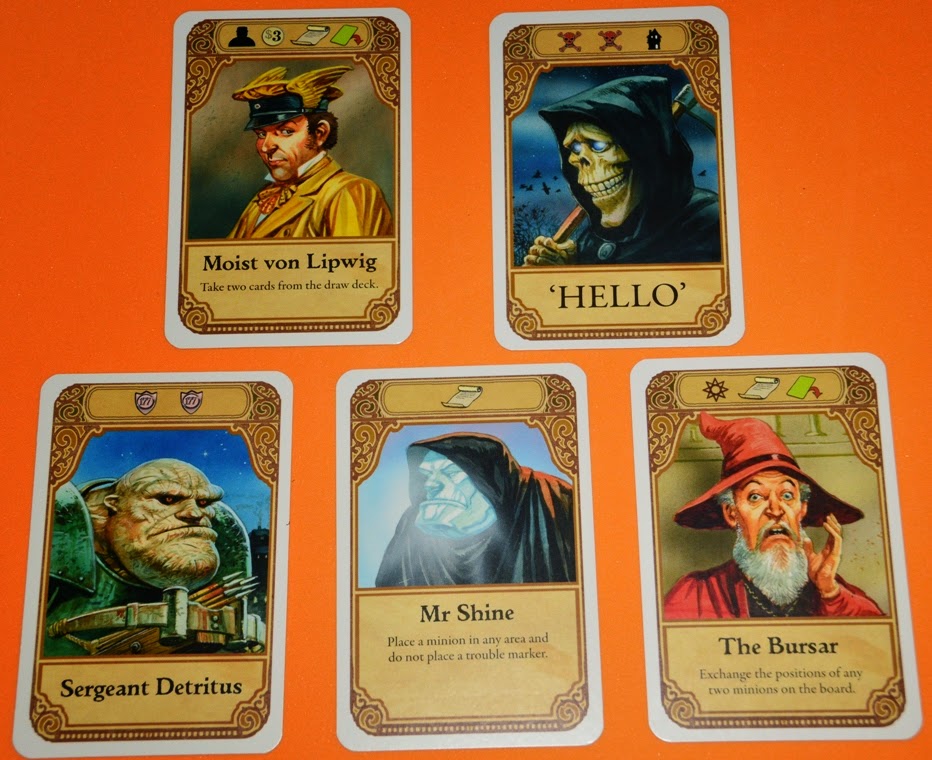 That HELLO card is pretty crazy, as it allows you to assassinate 2 minions in regions with trouble markers (1 minion per region with a trouble marker) and build a building.

If you played The Bursar you'll notice that, because of the Sun Symbol, whilst you get to perform the action of exchanging the positions of two minions on the board, you MUST draw a random event card.

(Random Event cards look like this - they do really crazy things:) 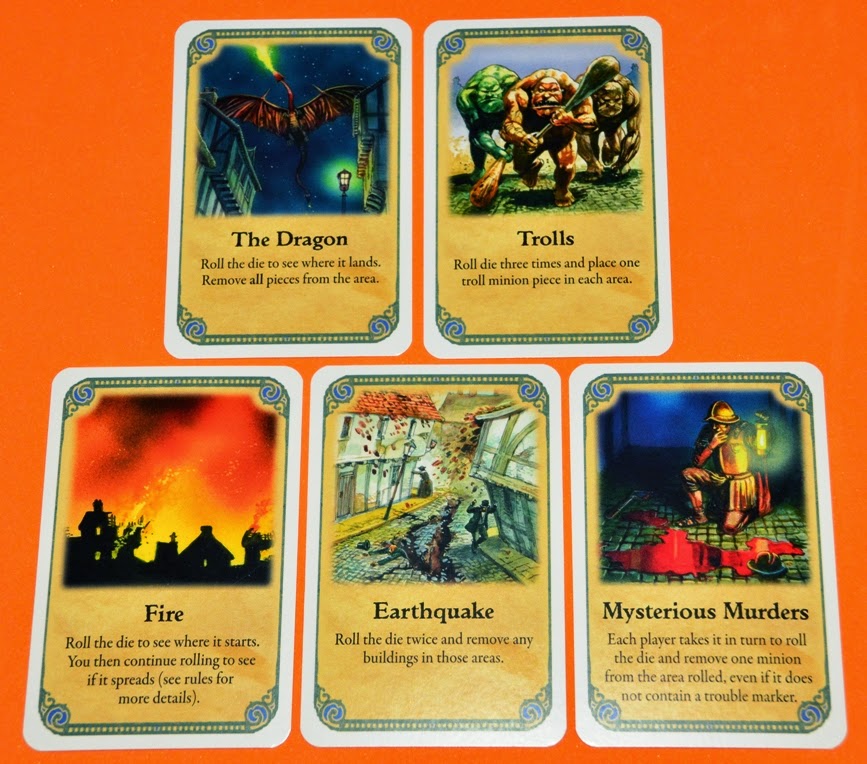 If I played this card... 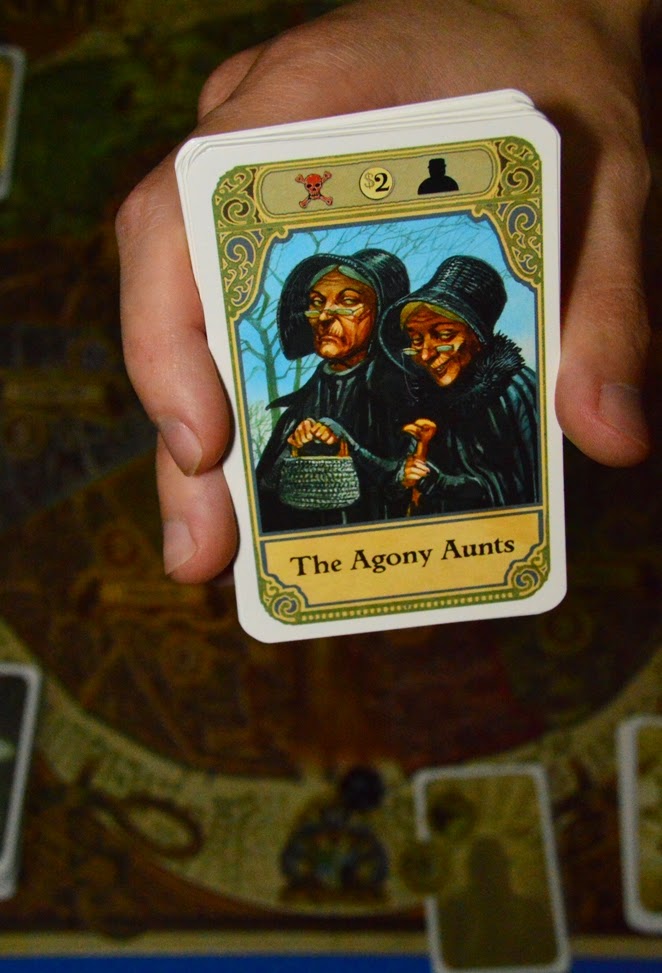 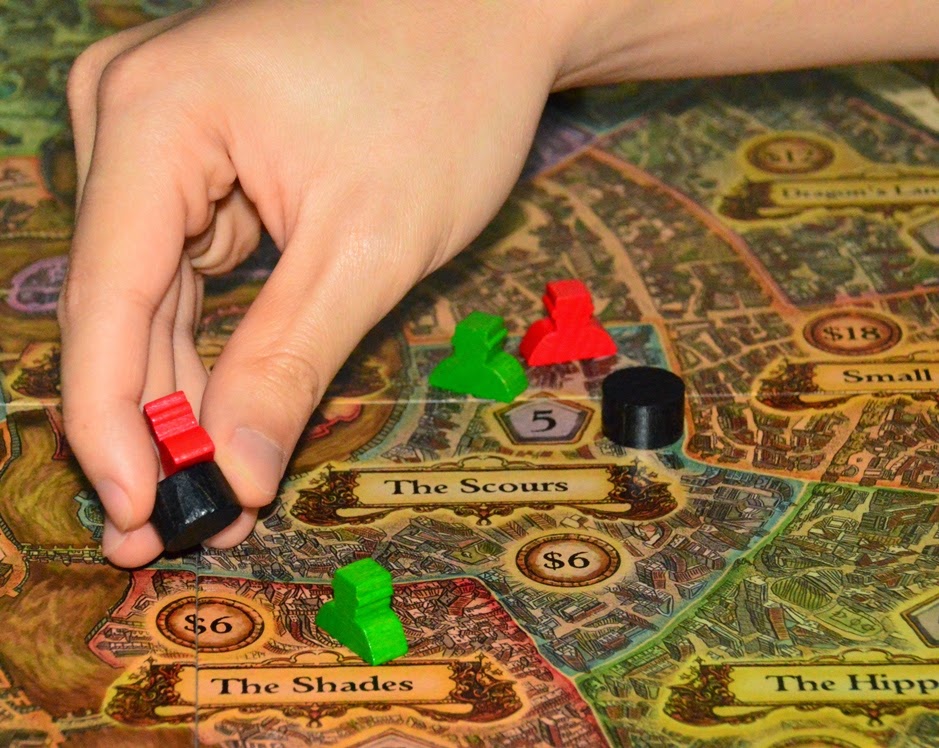 ..Assassinate a minion of my opponent's (and take off the trouble marker, as assassinations always remove trouble)... 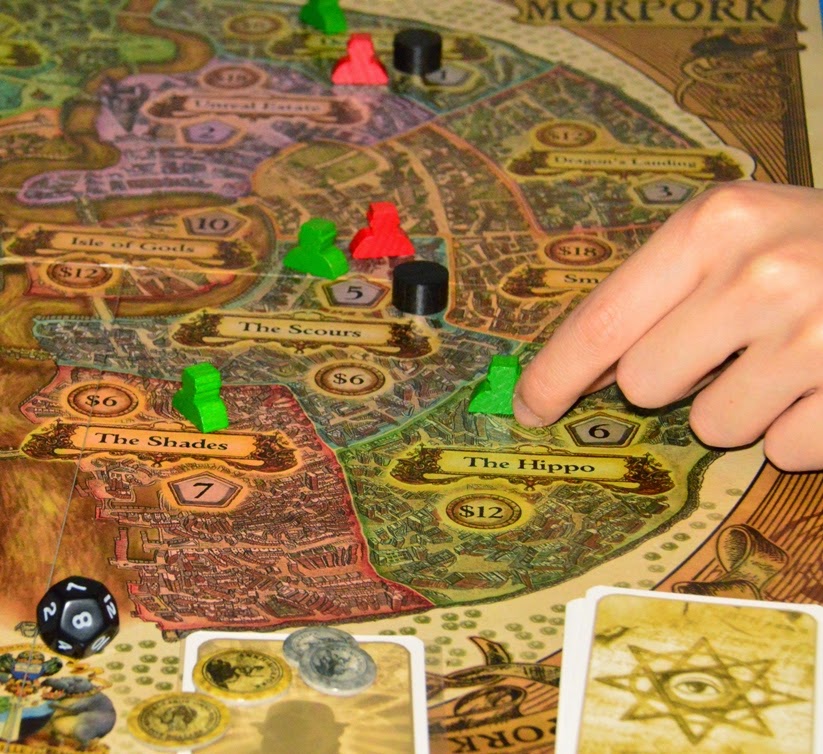 ..And Place a minion in an adjacent region to one of my existing minions..


I have given you enough examples. The best way to enjoy and learn about the game is to play the game yourself!