Following my review of Guillotine, I present to you another modern classic that is published by Wizards of the Coast and Hasbro.

Here's an addictive card game set in the Middle-Ages where everything revolves around climbing up a social ladder. However, if you are already at the top, you'll need to stop those pesky peasants and conniving merchants from overthrowing you... 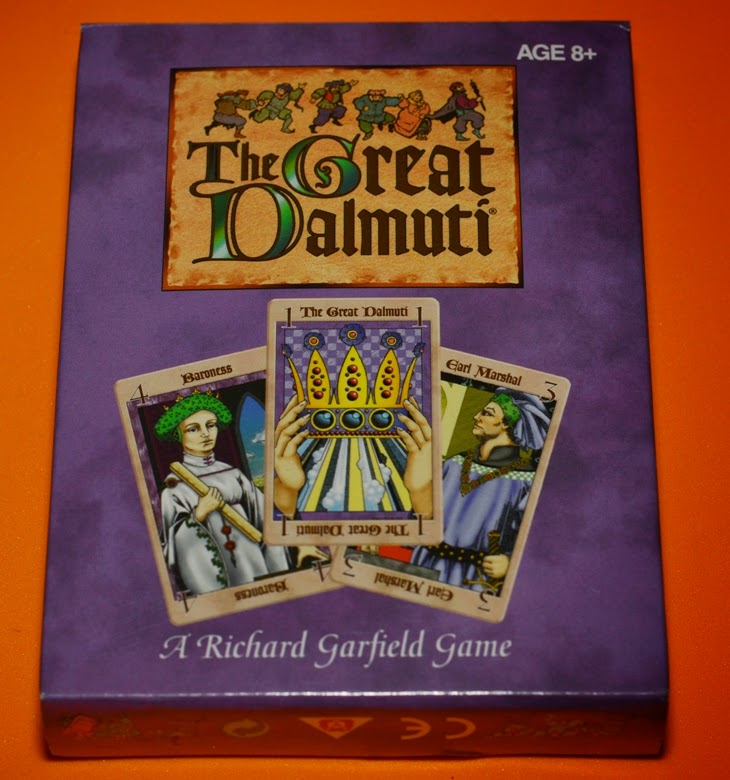 I'd like to thank a colleague at work, Kathleen, for introducing me to this lovely game :)

Random Trivia: This game transforms into something infinitely better if played with furniture of varying comfort levels. See below rules for a better idea of what I am talking about.

Interestingly, the origins of this game can supposedly be traced back to the Middle Ages from games such as Zheng Shangyou, President and Daifugo. As such, it is probably wrong to classify this game as a modern classic, given its ancient roots.

Publisher: Hasbro and Wizards of the Coast (just like Guillotine) [but there are other publishers too such as Amigo]

Time to play: Technically limitless if you choose to keep playing as many rounds as you like. However minimum time for one round is about 7-12 minutes depending on how fast you play.

Availability: Quite widely availably online but I'm unsure if it can be found in department stores.

I do like this game quite a lot because it is rather entertaining.

The Great Dalmuti's key distinguishing feature is its concept of climbing up in social rank - and it is this mechanic that produces some very astonishing and amusing effects. One moment you could be the ruler at the top; but all it takes is one bad hand for you to come tumbling down from grace...all the way to the bottom as a lowly peasant!

On the other hand, it is usually quite hard and rare for the lowest ranks to ascend the ladder, as those at the top have all the advantages and perks (just like in real life since "life isn't supposed to be fair" as the game's rules remind us). These benefits take the form of, firstly, taxes where peasants must give their best cards to those at the top and, secondly, the fact that the highest ranked player, The Greater Dalmuti, gets to lead first, and play then proceeds by order of rank - which can make a serious difference when you are trying to get rid of your bad cards. (You can even make a custom rule where the turn order after someone finishes goes to the highest ranked player). Therefore, this manifest imbalance between those at the bottom and those at the top makes a victory for the peasants all the sweeter - especially if, as is the case in my custom games, the peasant has the worst chair in the room, or no chair at all.

There is also some degree of tactics involved; for example, at times it is better to hoard all the cards in your hand by passing powerful plays made by your opponents and waiting for the right moment to use your powerful cards. This is especially true where you only want to climb up slowly, one rank at a time, or if you want to steady the ship and hold on to your position.

I honestly can't think of too many bad points for this game, only except for minor things like the fact that the deck is, at times, difficult to deal out given how it contains 80 cards (but that makes sense, as that is the Greater Peasant/Peon's duty/punishment); or the fact that it sometimes can be frustrating for lower-ranked players as they may require several rounds before they can escape their rank. But from my limited experience of this game, ranks can change quite rapidly and it's unlikely you will be forced to stay with the same rank after, say, 2 or 3 rounds.

What makes this game fun?
If you like the idea of climbing the social hierarchy in a party game where all the ranks keep changing, give this game a go.


Determining starting ranks for the first round + explanation of cards

Before you start, explain to everyone that the lower the card is, the higher ranked it is.

However, they operate as wild cards when played as a group (I will explain this below).

Take a look at the cards now: 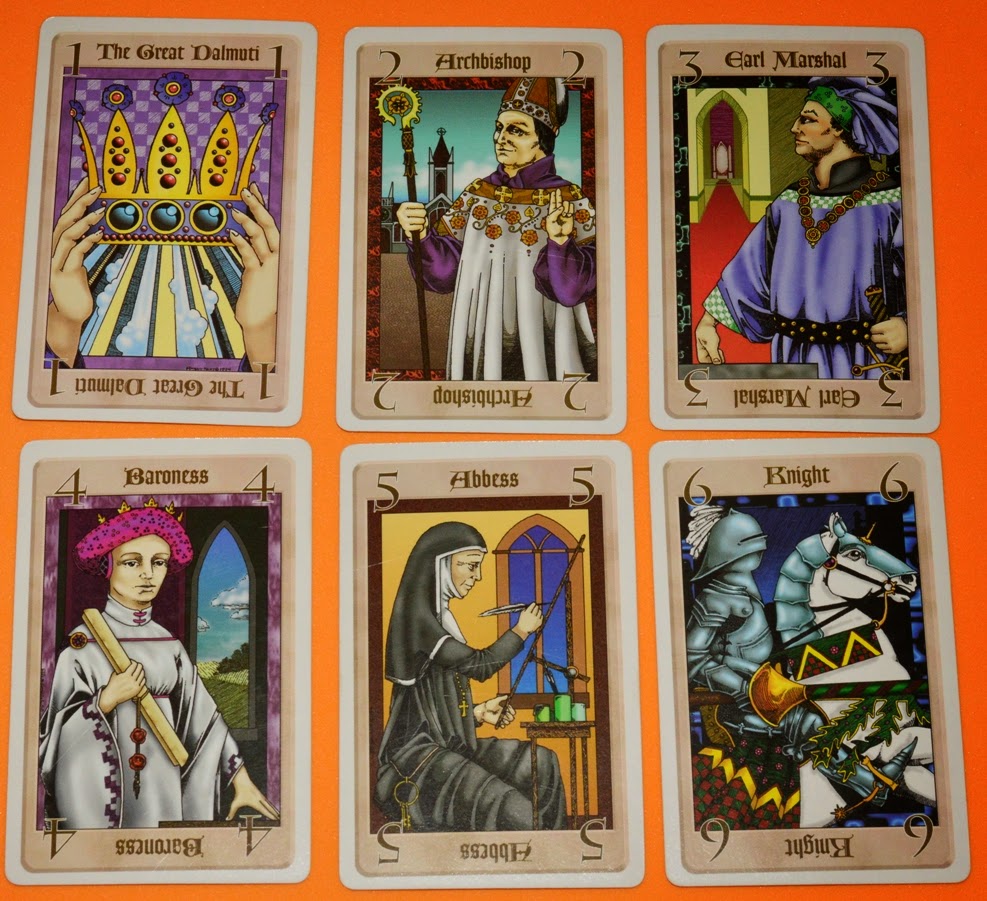 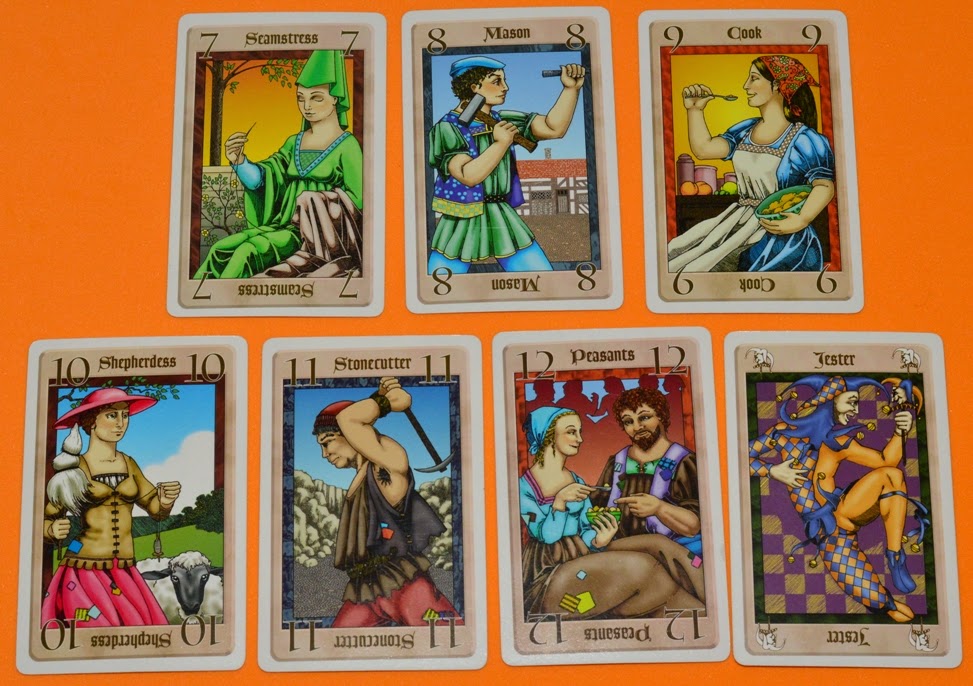 Get everyone to randomly draw a card.

Everyone else is a merchant. You can rank the merchants if you like, to make things more interesting. [and you can even give them different powers during the Taxation phase, discussed below]

In the event of a tie, have those tied players redraw a card each until their ranks can be determined conclusively..

The Greater Dalmuti will sit in the most comfortable (or what is alleged to be the best) seat.

The next highest-ranked player will take the next most comfortable seat which is situated next to The Greater Dalmuti.

Then, one by one, in descending order of rank, each next highest ranked person will take the next most comfortable/best seat until we reach the Greater Peon who has the worst seat (or no seat at all).

For example, in this 5-player game I have given the Greater Dalmuti the big wooden "throne" (it's apparently called a Lover's Bench); the Lesser Dalmuti the wooden chair on the right; the Merchant the plastic stool and the two Peons will have no chair.


Alternatively, you could do something like this, where the merchant has a relatively smaller seat; the Lesser Peon a stool and the Greater Peon no chair (as below): 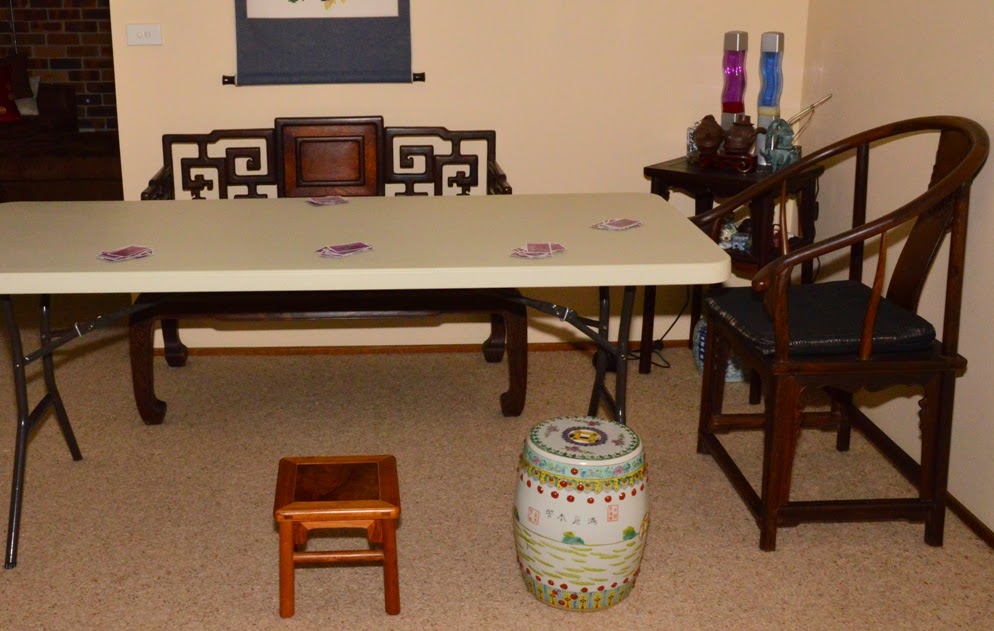 It is up to you how you want to do this. Keep in mind your audience and the fact that not everyone will like the idea of standing up, especially if they can't appreciate the humour or theme of this game.

Deal the whole deck out to everyone.

The same thing happens with respect to the Lesser Dalmuti and the Lesser Peon, but only with 1 card. 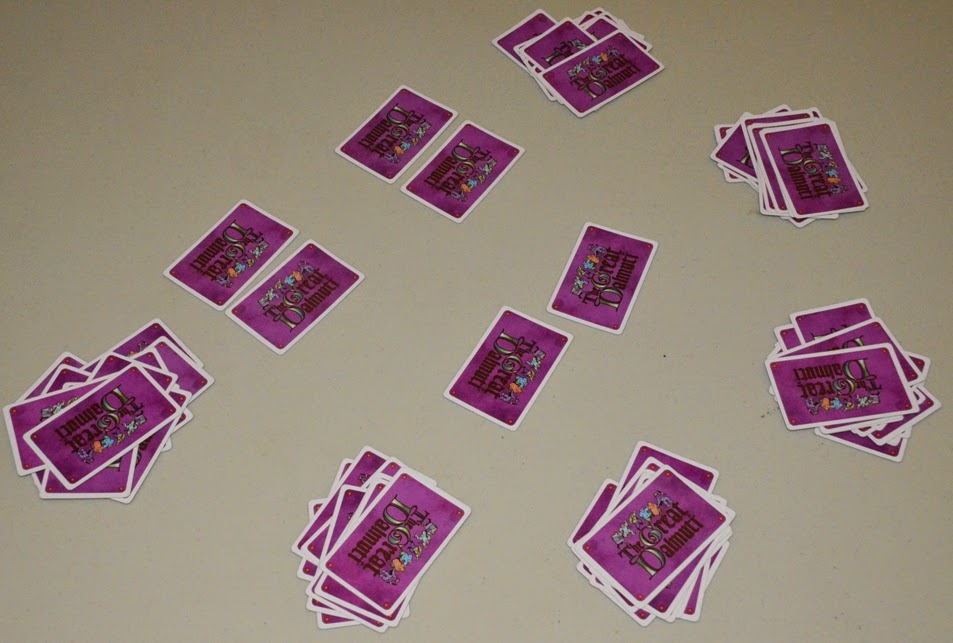 The merchants to the right just watch and do nothing - which is great! But you could change this - you could for example, get the merchants to bargain for cards or only trade with certain classes of people.

Exception to taxation: Should anyone receive two jesters, a revolution may be called if they are revealed. The effect of a revolution is that no taxation occurs ("to the disappointment of the Dalmutis and the delight of the Peons", the game notes)! Thus it may be beneficial for a merchant to call a revolution as well as it means that the merchant's superiors are not advantaged (giving them the opportunity to climb up in rank).

Playing The Cards - (with an Example)

Cards are played in "groups" or "sets" of cards. To beat a set of cards, the set must be of a higher rank (hence, from my understanding, ties are not allowed). The same set/group of cards must be followed by the whole table until everyone passes and a new group is led.

For example, if A leads with triple 8, then everyone must now play triples. 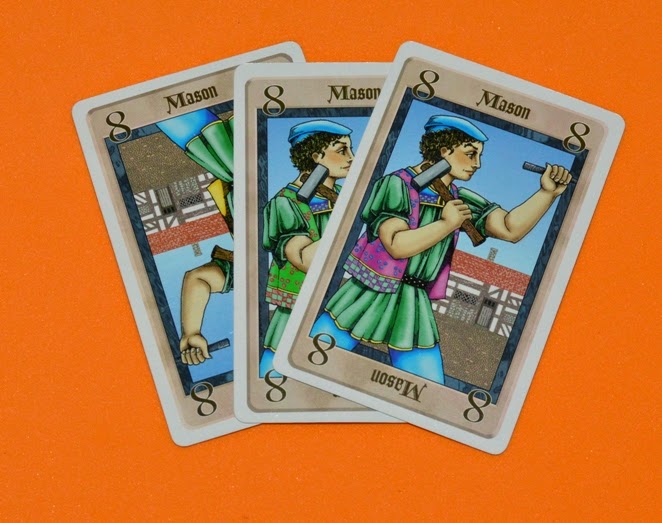 B could then play triple 7; 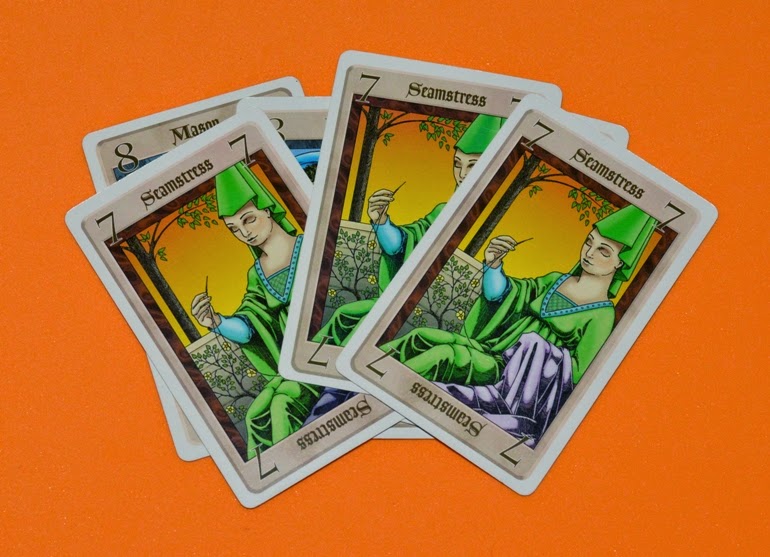 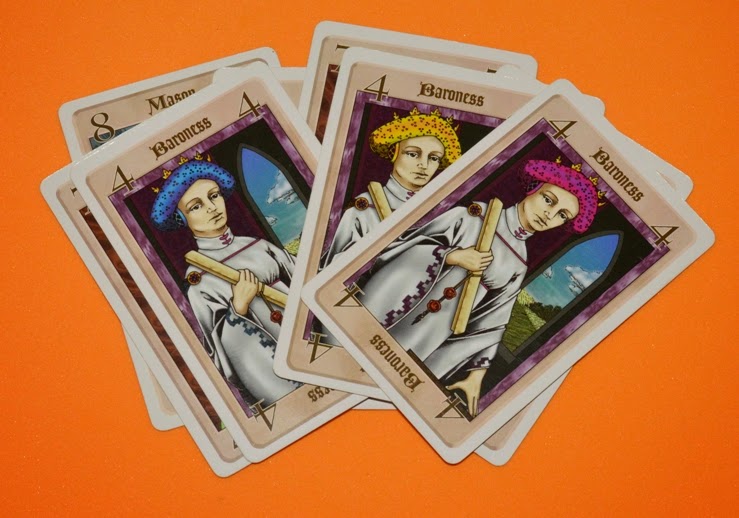 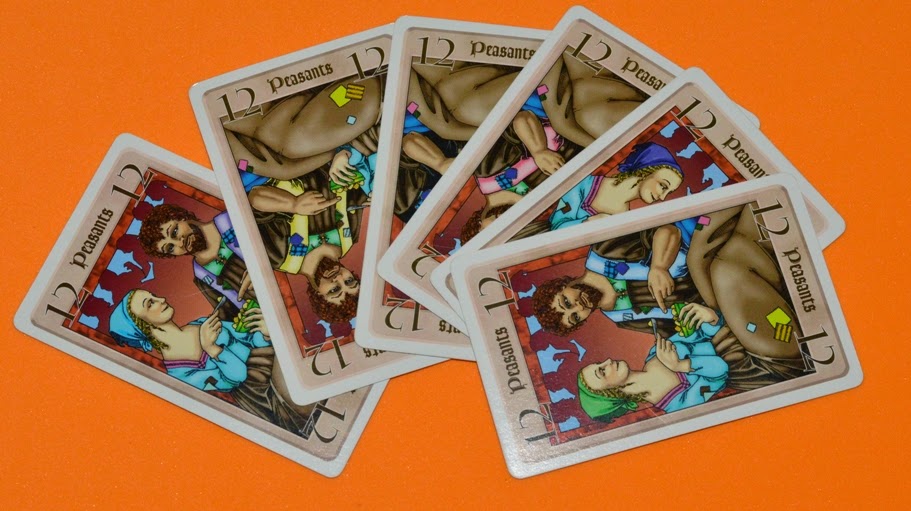 As mentioned above, a Jester can be used to represent any number in any group or set of cards.

For example, in the above picture, the player has only 5 x 11's so cannot ordinarily play a group of 6 cards of a higher rank.

Finishing and 'Going Out'

Whoever is the FIRST to get rid of all their cards has "gone out". Irrespective of their current rank in this round, they will become the Greater Dalmuti the next round! The next person to go out becomes the Lesser Dalmuti and so forth!

The last person to go out, of course, becomes the Greater Peon.

At the start of the new round, players get up and sit in their new positions or seats of "power" and a new round begins.

But that is not, strictly speaking, necessary as the inherent fun in this game lies not with points but with the constant changing of positions in the hierarchy of life.