A unique audio-based filler* in a class of its own.

Not a perfect game by any means, but it certainly is unique and revolutionary enough for it to receive deserved plaudits (at least on my part).

*A filler game is generally thought of as a game that isn't heavy but rather light and is, at times, used to bridge the gap between two longer games.

Random Trivia: My mum calls this "the pagoda game" - you can probably figure out why from the picture below. Although it doesn't really look like one.

Publisher: Zoch-Verlag (they are fast becoming one of my favourite publishers because of their wacky ideas)

Time to play: 30 mins, but it can take quite a long time if you follow the rules to the tee. But a simple modification to the rules, namely reducing the number of cubes players start with, can change this.

Price Range (AUD): $40 to $65 (if purchased on ebay be prepared to pay a ridiculous price). Quite an expensive game as it has to be imported from Europe.

Availability: Seemingly available online at the time of writing.

The defining feature of this game is its revolutionary and effective concept of using sound as its central gameplay mechanism. I can say with some degree of confidence that Mord Im Arosa is likely to completely change your concept and definition of board games. I have yet to encounter a game that comes close to mimicking its idea and function - although, admittedly, my knowledge of games isn't fantastic.

In summary, players drop cubes down a cardboard tower and try to take note of where each cube lands based on the noise created. This is the extremely novel game mechanic that fuels the entire game. I've played this game with many people and each time people are always amazed that such a game exists. It truly is a well-thought out gimmick.

However, there are some downsides to this game. For example, the game's theme isn't entirely convincing. We are told by the game to expect a "thriller" where we must "solve" a murder mystery. However, as all players leave behind "clues" in the form of cubes, and all players are encouraged to "hide evidence" by removing their own cubes from the crime scene (by guessing which floor your cubes are on), the game in one sense does seem to suggest that all of the players are murderers. This sounds a bit surreal like Murder on the Orient Express. Or it could of course just mean everyone is suspicious and trying to prove they are innocent.

On the other hand, there is some sense to branding this as a murder mystery. Players are encouraged to pin the crime onto another player by guessing if their opponents' cubes were on a certain level. If correct, their opponent's cubes will be pinned to the level in which they were found. Players want to prevent their clues from being found on a crime scene level.

The problem with the rules is that they are at times a little clunky to explain. It might take a few goes to finally get everyone to realise that they will lose the game if more of their cubes are either on the crime scene itself, or close to the crime scene as compared to all other players (see Rules below for a better idea). It is one of those games that people will go "ohhhhh" after they play it once - indeed, it can be a bit challenging to explain the two phases of the game whilst trying to maintain everyone's patience and attention.

If you take this game to be a light-hearted filler, and if you can ignore the strange rules and slightly off-kilter theme, then it's a fantastic game that will certainly wow your friends. However, one shouldn't take this game too seriously because there isn't too much in it by way of strategy or "meat" to gameplay. All Mord Im Arosa really does is glorify that one component of our senses that is seldom (I would not say never - that would be something like taste or feel!) used in board games.

What makes this game fun?
If you want to try a radically different game concept, and don't mind it being a bit on the light side, give this game a go.

See the second photo at the start of this review to see what the game looks like when set up.

Everyone receives 20 cubes of one colour of their choice (IMPORTANT: If you want a faster game, perhaps play with half the amount of cubes or toggle this to your liking)

The game is split up into two phases. Before I explain them you should know the basic principle of this game.

The general premise of the game is to keep track of where:

You do this by listening to the cubes being dropped into the tower.

The more accurate you are at predicting these three things, the more likely it is you will win.

If you make the most mistakes in identifying the above three things, and provided people 'target' you in Phase 2, you have a higher chance of losing. You will lose if you score the most negative points - you will understand if you read until the end.

This idea will be developed further.

Set up and Hostages are placed

Someone takes the 2 red victim cubes and throws them down the shaft (or top) of the tower ONE AT A TIME.

Note that, in this game, whenever cubes are thrown down the shaft, people must remain quiet and listen to detect or guess where the cubes are situated.


Then, everyone drops 2 of their own clues down the shaft.

Phase 1: Guessing where the red hostage cubes are (Establishing the "Crime Scene Floors")

Then, starting with the first player (determined by you or otherwise - the rules stipulate that the person who most recently held a knife goes first), that player must make one guess as to which level they think the red hostage cubes are.


If the guess is correct

Suppose Black correctly guesses Level 6 to be the level where she thinks the Red cube is.
Then she will place the red cube on the board, on level 6, to indicate that a murder has occurred there. 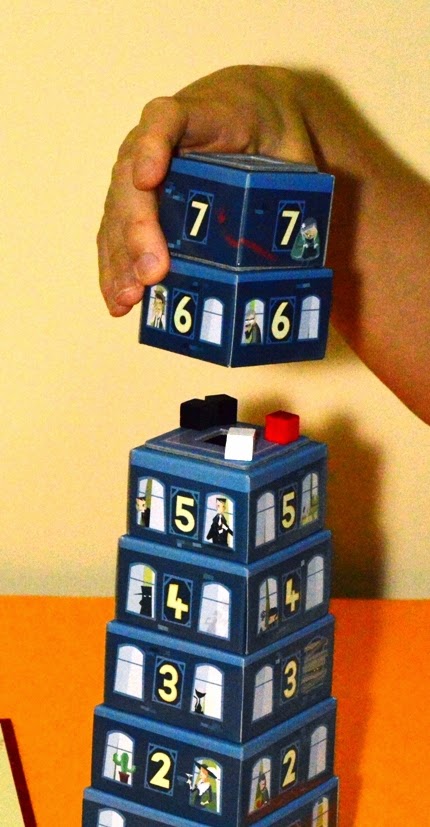 The cubes of other colours also present on Level 6 are immediately pinned to the board on level 6 (a bad thing as they are now permanently locked onto a Crime Scene Floor).


As a "penalty" to all players whose cubes were caught on this level, the same number of cubes as that originally found on the level are taken from each respective player's supply - here, 2 from black and 1 from white. 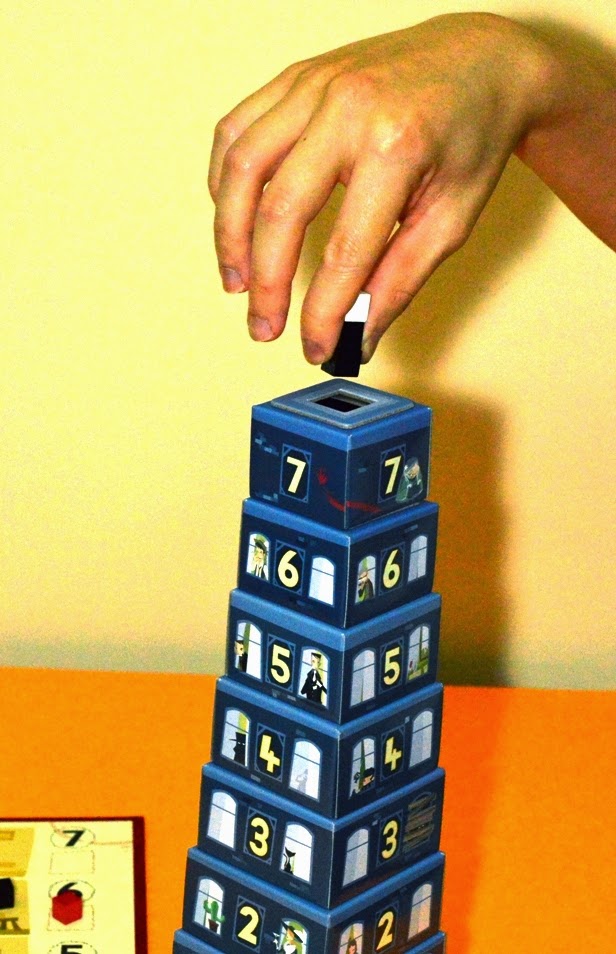 They are thrown down the shaft again, one at a time. The game recommends that you call out the colour of the cubes individually as they are each thrown down.


(If the guess is incorrect)

If you incorrectly guess a floor in this game, whether it be in Phase 1 or Phase 2, you will be penalised by way of throwing one of your cubes down the shaft at the top. This is bad because the more cubes are in the tower, the higher the chances are that someone will pin you to a Crime Scene Floor in Phase II.

For the purposes of fairness, other cubes that have been exposed on that incorrectly-guessed floor must be taken and re-thrown down the shaft so as to ensure that people don't know which floor they are on during Phase 2. This applies not only to Phase 1 but to Phase 2 as well.

Phase 1 ends as soon as both red cubes are found and pinned to the board.


Phase 2: Pin the murder to someone else or...hide your evidence

From now on in Phase 2, you can take two actions:

1) Hide/erase your evidence (defensive): This involves saying which floor you think your cubes are on by saying, for example, "I think I am (or My cubes are) on Floor X". If you are correct, you get to take back your cube.

2) Pin the murder to someone else (aggressive move): This involves saying which floor you think someone else's cubes are on. Eg. "I think Brown is on Floor Z". If you are correct, the reward is that you get to place that person's cube onto the board.

As above, if the guess/statement is incorrect, you will be penalised and 1 of your cubes must be thrown down the shaft. Other cubes found in the shaft will also be thrown down one at a time.

For example, suppose Black guesses that she is on Level 6:

This is clearly wrong, as there are only two White cubes.

Her penalty is that she must now throw down 1 Black cube. The 2 White cubes get re-thrown (one at a time), much to White's relief as White could have been pinned to Level 6 had Black said "I think White is on Level 6" (but Black didn't do this).

Note that there is a special rule for guessing the ground floor (zero) - one of your cubes must be present on the ground floor. If not, you have to pay the penalty of throwing one cube down the tower.

Scoring - the game ends when 1 player runs out of cubes.

For every one of your cubes that is: