The arguably inferior version of Lost Cities, but with the added bonus of letting you play 3 or 4 people. 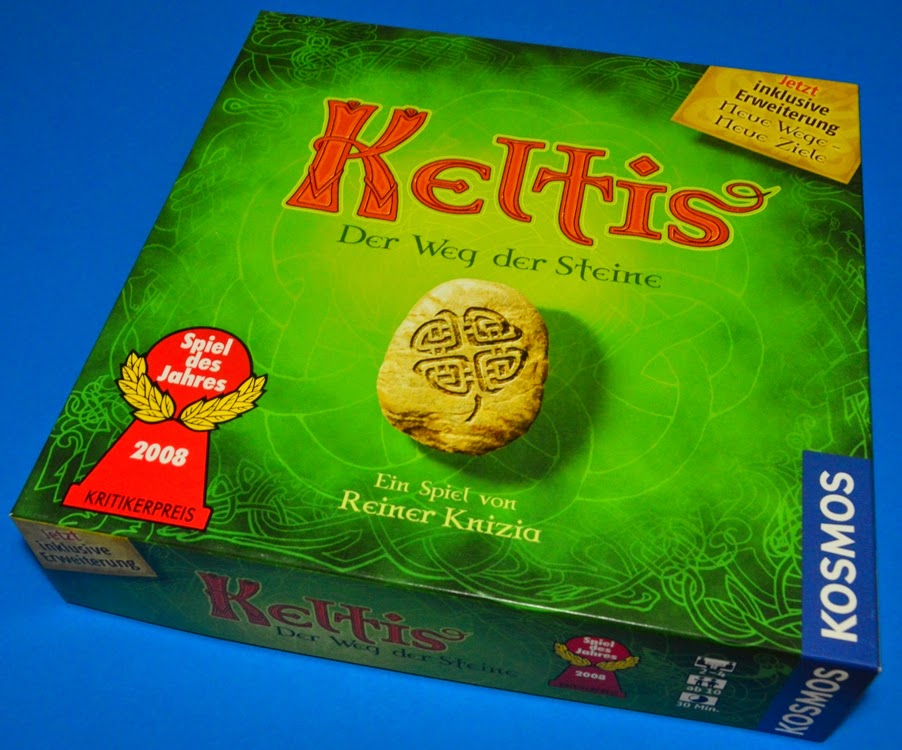 Edition: The version I have is Der Weg der Steine - which includes the expansion for Keltis.

The USA version of Keltis is Lost Cities: The Board Game (LC:TBG). The latter appears to be better received than Keltis. Two main differences in LC:TBG include players playing 3 rounds  (rather than Keltis' 1 round) and players only being allowed to play cards in ascending order (rather than Keltis' flexibility in allowing players to play cards both in ascending and descending orders). LC:TBG apparently also contains better components and its theme more closely follows the original card game.

Price Range (AUD): It seems like the Kosmos edition of Keltis (which includes the expansion) is the more common version more readily available online - the original standalone is almost nowhere to be found. This expansion-inclusive edition sells for about $63 to $87, with one seller even selling it for $191 which is extremely crazy. None of these prices are worth it.

However, many German sellers on eBay are opting to sell the game for around $17 plus postage (but it's unclear if they ship here and how much it will cost). I got mine for $51.50. In hindsight, that was a price not worth paying.

Random Trivia: The game states that "Whoever last visited Ireland starts the game." I'm sure it's possible, but I wonder how likely it is that someone meets that requirement given a group of gamers in Australia...

Availability: Seems like it's mainly available online - note that it seems quite widely available as a downloadable app. I would expect some hobby game stores to sell them, but perhaps not everyone will.

Knizia won the 2008 Spiel des Jahres with this game using the same precepts of Lost Cities as a foundation for its gameplay - something that I find both interesting and strange. Whilst Keltis is a decent and interesting game, I do not really understand how it can be considered a good or great game.

Don't get me wrong though. The flavour of Lost Cities is replicated well here for a group of 3 to 4; like its ancestor, in Keltis players vie to collect certain sets of card numbers within certain colours. The tension of deciding whether to discard an unwanted card that could be wanted by your opponents is still there and is, at times, an agonizing dilemma (in the good sense). Keltis adds a slightly different dimension to it predecessor, however, as there is the choice to either play cards in ascending or descending order; furthermore, instead of investment cards (as in Lost Cities) players are given a choice as to whether they would like to double their score in only one of the colours available (if they feel it is a strong suit of theirs).

While these nuances to gameplay are interesting and most welcome, for some reason the game doesn't really feel as exciting as, nor does it have any "improved" originality as compared to, Lost Cities. Importantly, the absence of any real theme in Keltis does hurt this game to some extent. For example, in Lost Cities, there is the prevailing idea of going on expeditions and having to pay for the costs when committing to each trip; players are also invited to take the risk of investing in any number of colours or expeditions; and the artwork and pictography of its cards is exciting. In my opinion, these traits are lacking in Keltis and demonstrate that Keltis is the inferior game in terms of theme. Howeve, like its predecessor, Keltis does retain this idea of penalizing players for not doing well in a colour they have committed to - but that has always been a given, its game mechanics never being in question. Perhaps my view of this game would have been different had I not played Lost Cities first.

Nonetheless Keltis is still a fun and decent game, one that I wouldn't mind showing to people interested in a light family game every now and then. Despite my numerous criticisms it still deserves a score close to Lost Cities. Additionally, whilst I have not played it myself, it appears that the US version of Keltis, Lost Cities: The Board Game, preserves the original theme of its predecessor quite well (but from my understanding, it still doesn't match up to its predecessor's originality and gameplay).

Question: Perhaps it all comes down to the fact that Knizia's gameplay for these games is better suited for two players?

What makes this game fun?
Competing for a certain set of cards, and the tension you feel when deciding whether or not to discard unwanted cards (as your opponents can pick them up if they need them) makes for quite an interesting game.

This is what the inside of the box looks like, minus the board. 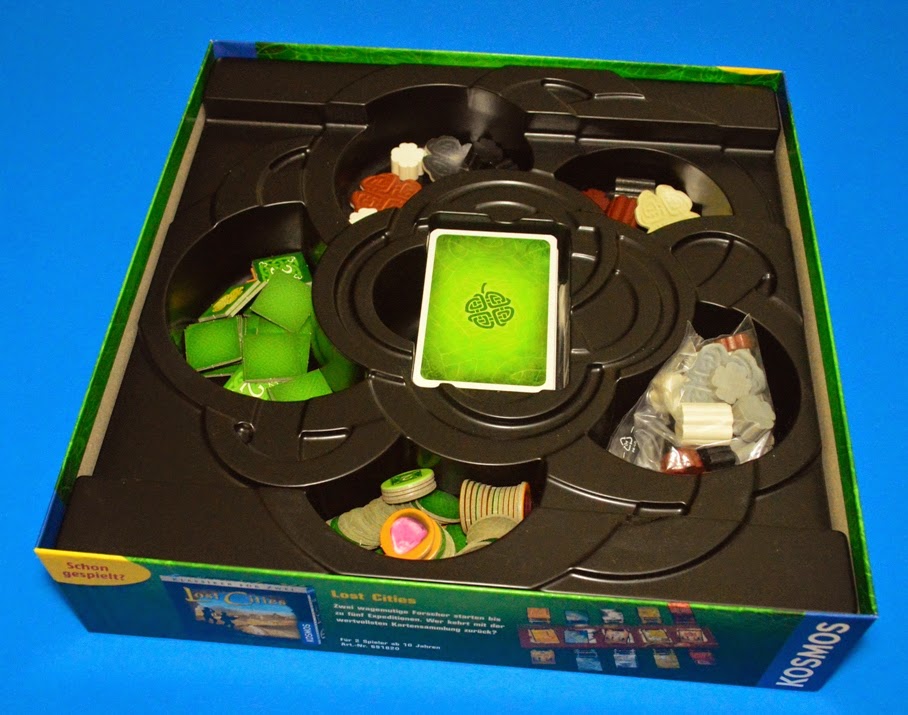 The board looks something like this when set up (note that the tiles are randomly placed on the grey squares):


The above setup is for a two player game. But setup for a 3 or 4 player game is exactly the same except with more "totems" of different colours.

Everyone starts off with 5 totems - one totem is double the size of all the others (though it is a bit hard to see from this point of view) as using this totem will double your points. All totems are placed on the large white block area at the bottom of the board.

Each oblique/vertical pathway on the board represents the path for a certain colour. From left to right they are: Brown, Yellow, Pink, Green and Blue. Only 1 totem can be played along each pathway.You can choose to use all 5 totems to travel along all 5 pathways if you have the right sets of coloured cards.

The aim of the game is to get the most points. This is usually achieved by advancing as far as possible down a coloured path and by collecting as many wishing stones as possible (the Orange squares with the precious rock).

Just like Lost Cities, on your turn you must first play a card THEN draw a card:

Hence, the common element to both play and draw actions is the discard pile - which is accessible to all players. (Therefore, be careful what you discard as your opponents have access to your discard pile).

Playing cards for points -- 1b)

For every card played in that colour, your totem moves up by one stone.

When you play a card for points, the first card you play is very important because it dictates whether you will be able to play cards in ascending or descending order. Starting with an extremity (eg. 0 or 10) is good as it lets you have more room to go in one direction.

The more cards you can play (either in ascending or descending order), the more your totems will move along that coloured path shown on the board above.

Let me show you an example to illustrate all this

For example, here's a draw deck with some discard piles for each colour below it. 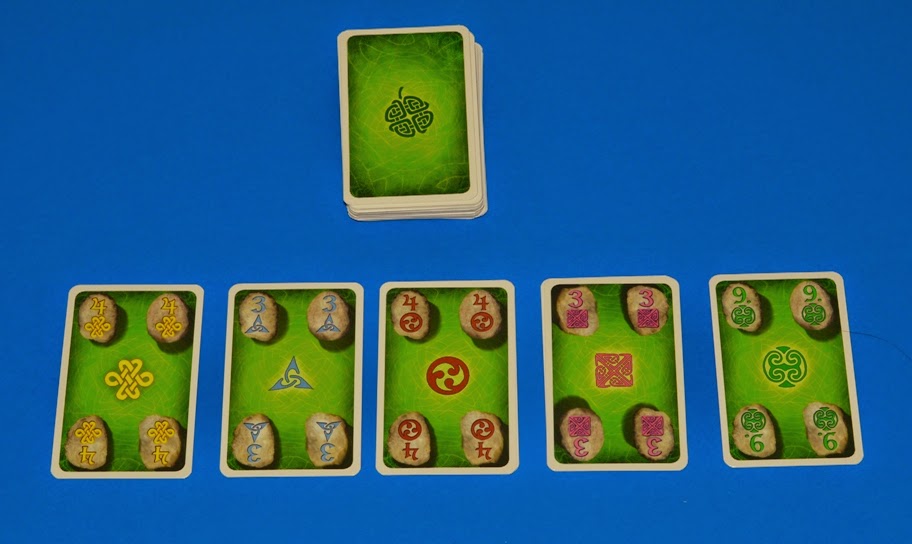 Suppose it is Grey's turn. Grey plays the Yellow 9 down... 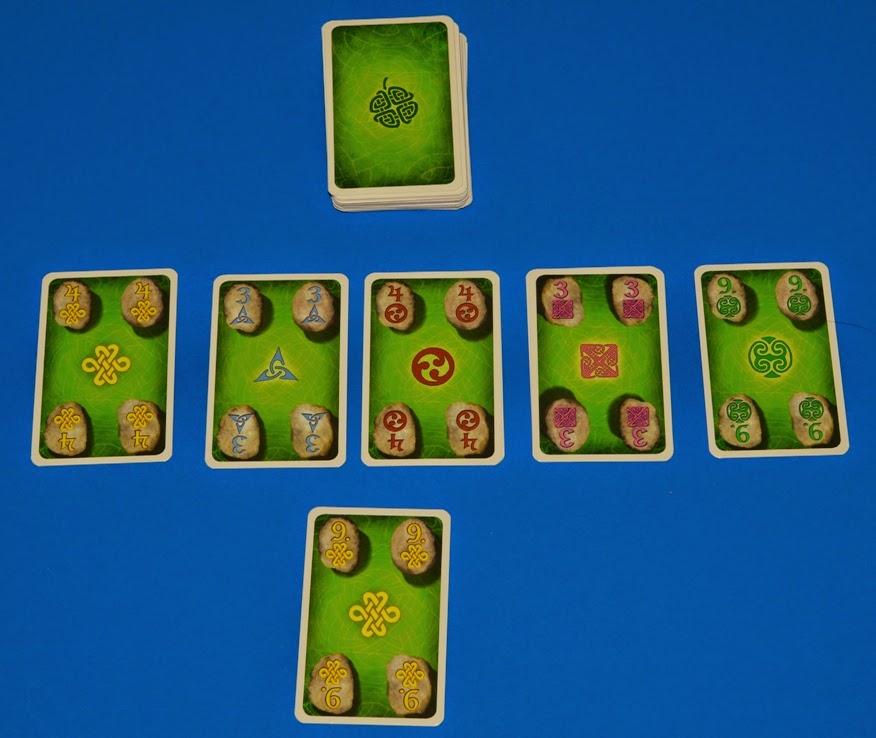 ...this causes his grey tile to move forward one space on the Yellow pathway, as a Yellow card was played... 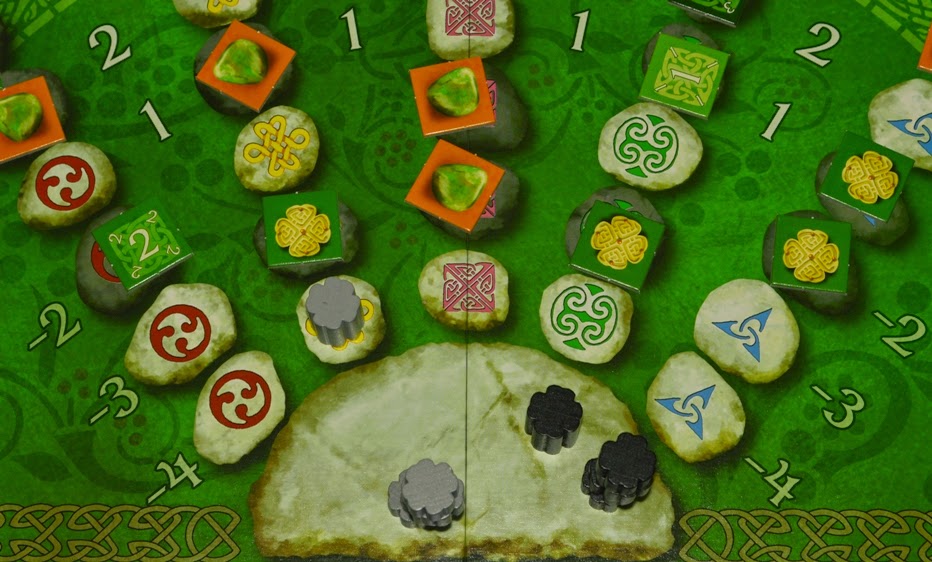 ...and then Grey picks up ("draws") the Yellow 4 from the discard pile like so: 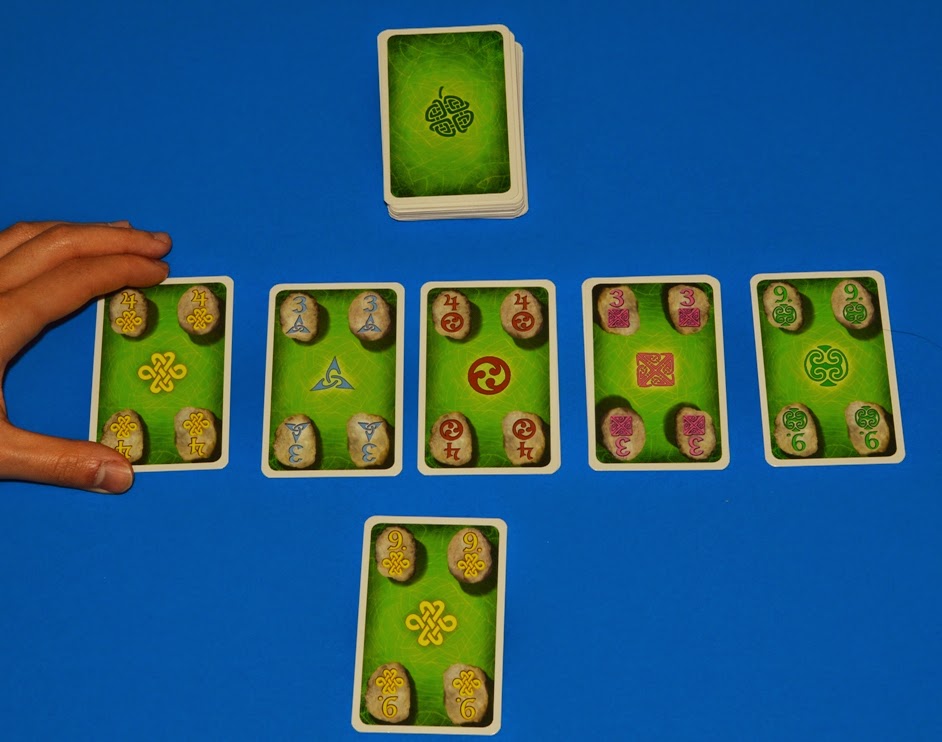 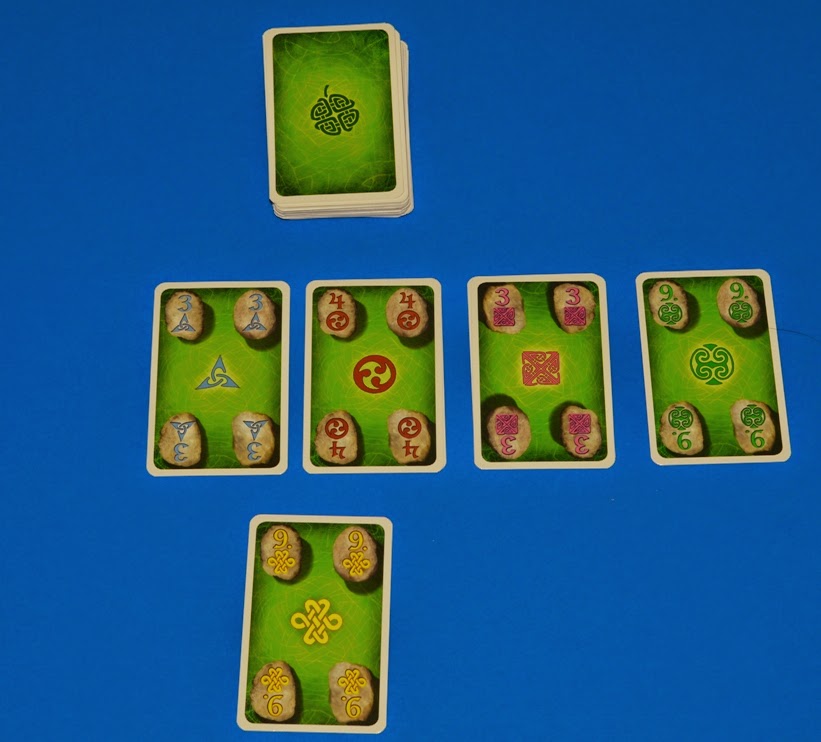 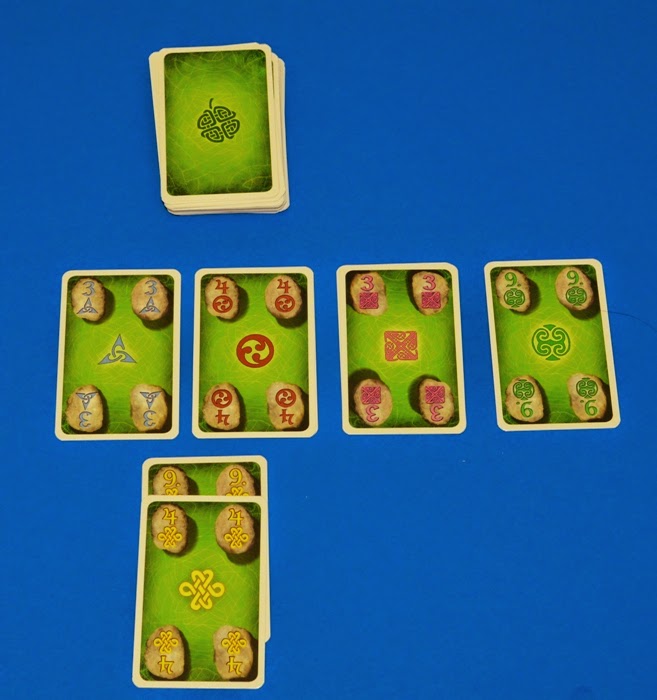 He decides to go in descending order, so plays the Yellow 4 that he just picked up (and then he draws a card from the draw deck to complete his turn).

This causes Grey to move to the next stone forward. 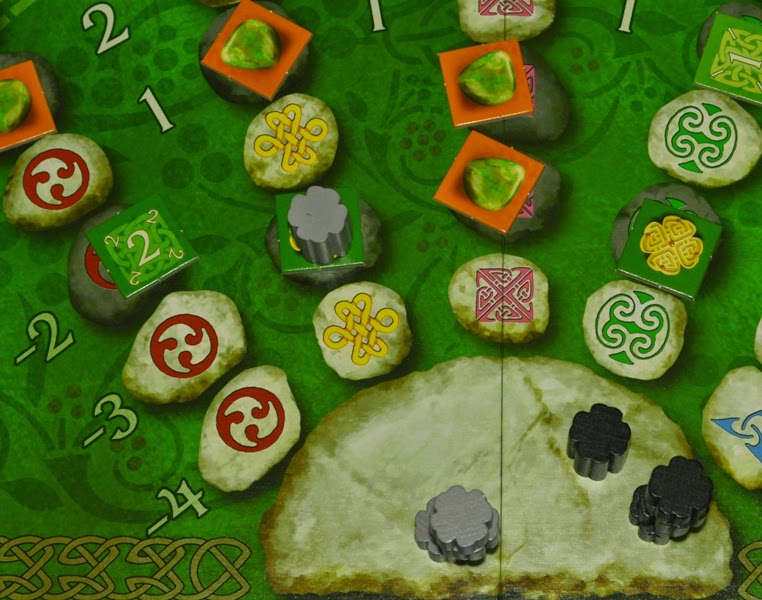 Thankfully, this tile ("the Clover Leaf") gives him a free move, so he advances to the third square as follows: 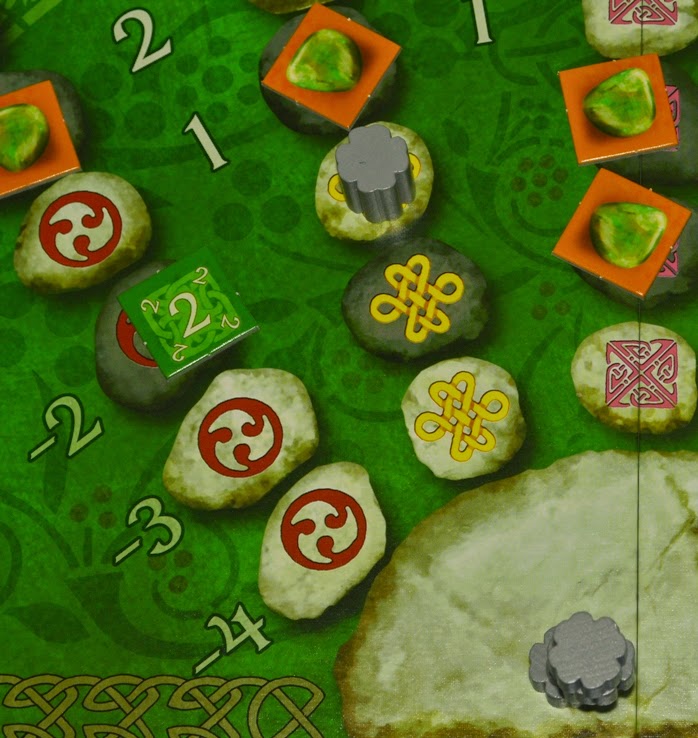 This still isn't really that great of a progress as staying on this 3rd stone will only result in -2 points (as you can see from the left side of the board). Grey will need to somehow procure the Yellow 3, 2, 1, and/or 0 cards to move further along the track!

The other thing to worry about is collecting wishing stones 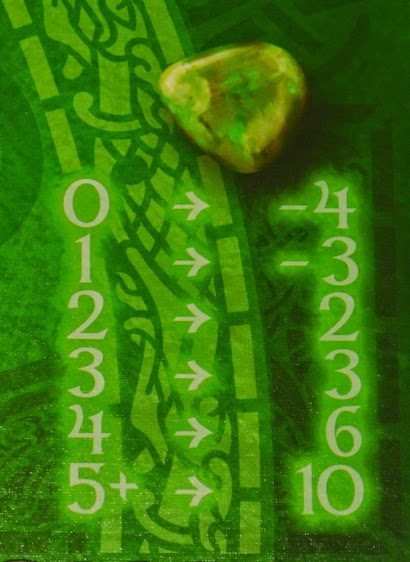 If you collect 0 wishing stones, you will lose 4 points.

Once you start collecting a minimum of 2 wishing stones, you will be on the positive side in terms of points. The arrangement of wishing stones on the board may affect which colours you choose to take on (this is randomised each game by the shuffling of tiles).

The game ends when any 5 totems have reached the last 3 rows of the board.

Add up all your points from the board (based on where your totems are); the victory points collected from the square tiles; as well as the points from the number of wishing stones collected. Remember that your bigger totem is worth double points (it's unclear to me if you double victory points obtained from square tiles that your totem has passed over - but perhaps this is so).

The Expansion lets players play different coloured cards to go up multiple pathways - thus each route is not confined to a single colour. 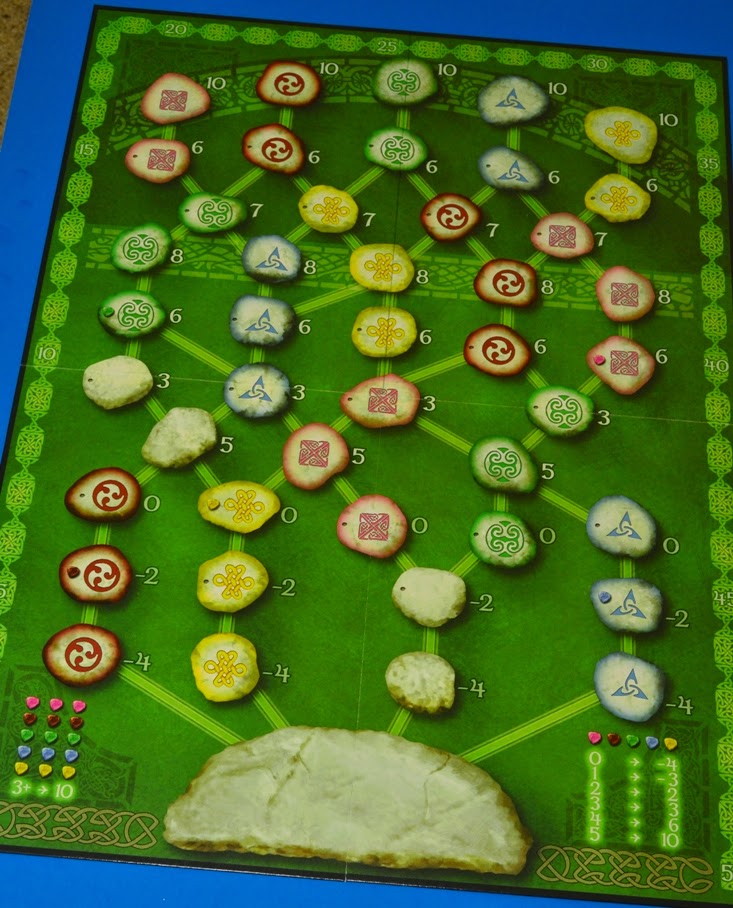 There is also a bonus tweak here in the expansion - collect 3 gems of a kind to get 10 points. The game also features a new tile that lets you discard a card played (thus possibly allowing you to change ascending/descending direction for a certain colour).