Blokus' long-lost sister, separated at birth and living on the other side of the world..

Publisher: Gemblo, Inc - but there many others though out there including the Green Board Games Edition

Version: I am reviewing the DELUXE version - which looks much prettier and jewel-like than its normal-version counterpart.

Price Range (AUD): $54.59 to $93.39 (including the mini-expansion - but I ordered this by "slowboat" which takes about 1-2 months to deliver. The speed of delivery can change the price obviously)

Availability:  Quite hard to find unless you speak Korean and can navigate Korean websites. Believe it or not, I had to email Justin Oh himself to buy this game...

There is an ongoing "debate" as to whether Gemblo copied its game mechanics from Blokus. It is undisputed that Blokus was released first in 2000, but, if my memory of the debate serves me well, Gemblo's owners claim that their game was developed independently of the success of Blokus.

Irrespective of which game came first, I like this better than Blokus simply because it caters for more people: it plays especially well with 6 people. It may seem like a cop-out reason but the ability to play with more people is quite important to me. However, the comparison does not stop there - as you will see, I think Blokus is better for 4 people.

As alluded to above, the gameplay is generally similar to Blokus - instead of pieces needing to be placed "corner to corner" (as in Blokus), pieces must be placed "one line away" from each other [see the rules below]. Players again share the same goal of placing as many of their pieces as they can on the board and, like Blokus again, this means they must take into account spatial considerations and decide whether to expand their territory or to focus on blocking opponents.

In that general strategic sense, I think both games are similar. However, that being said, I am not well-versed enough in mathematics or spatial geometry for me to appreciate the subtle differences in tactics that may be present from using a board made up of hexagons (rather than squares as in Blokus) and, correspondingly, hexagonal pieces. On gut instinct though, it would seem that such differences could make a heck of a difference to the overall spatial strategy. I can imagine though that some people will prefer the "simplicity" of Blokus' corner-to-corner rule.

There is also a particular awkwardness with the various markings on the board - the board has different "starting positions" and "playing areas" for different numbers of players and admittedly it is difficult to distinguish between the markings and to tell where to put your pieces on.

In particular, 3 or 4 player games may, perhaps, produce some difficulties. (Hence, 4 players may prefer to play Blokus) There are special rules for a 5-player game which look quite interesting.

That being said I think the 6-player and 5-player variant is quite good as the whole board is used and there is no room for confusion.

* September 2014: Reduced from 7.1. As Gemblo and Blokus are similar games, it wouldn't be right to rate Gemblo too much higher than Blokus.

This game contains everything that is fun about Blokus and adds the ability to play 2 extra players, but in a slightly varied strategic setting. For existing Blokus players, it perhaps would serve as a variant to the game, but may not necessarily be a total placement, depending on your view of things. 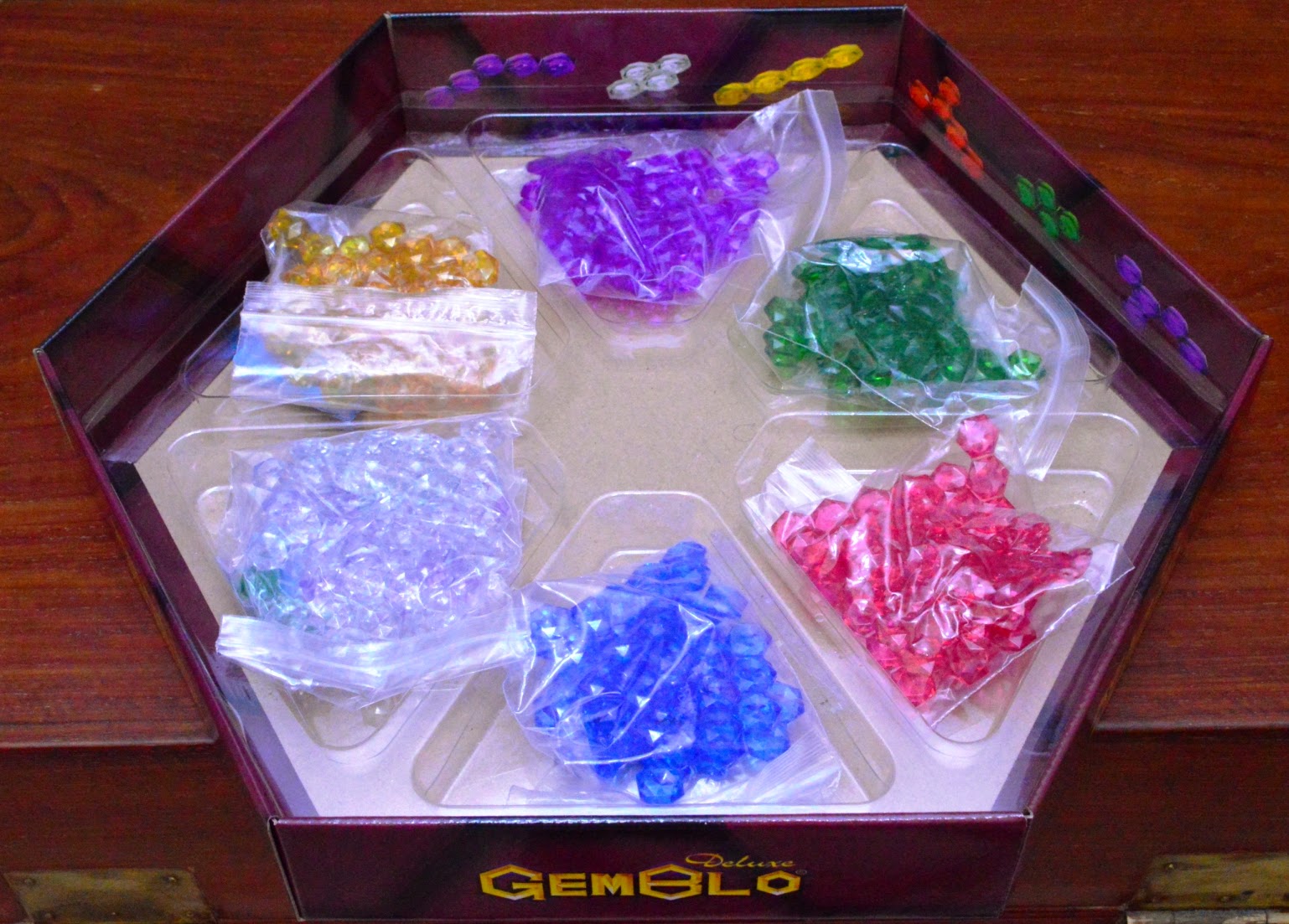 Pieces get placed on this board:

Everyone places a piece at each VERTEX/POINT of the Hexagon - this intuitively makes sense because there are 6 vertices and plays just like Blokus. 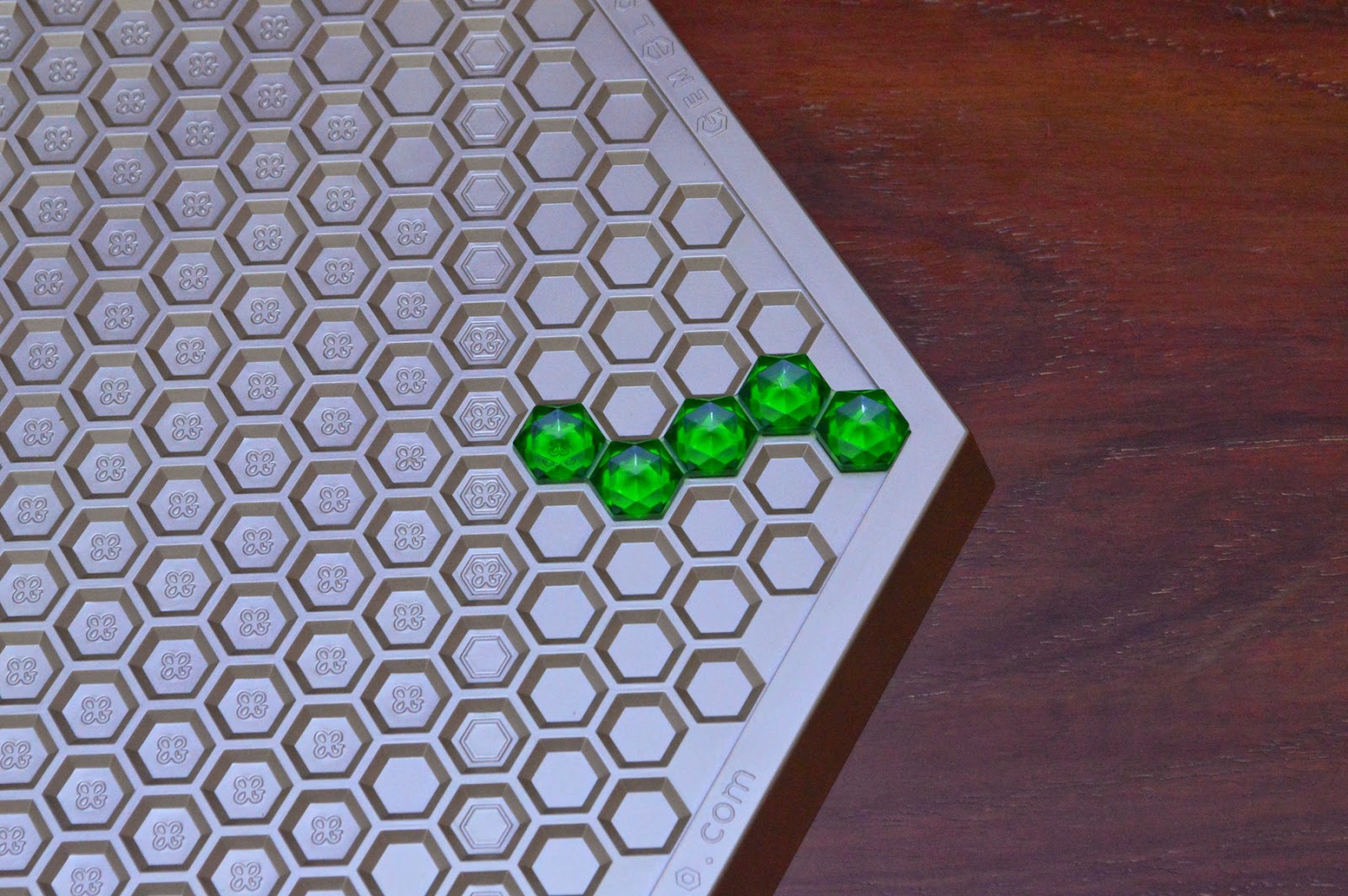 Then, after everyone has had their turn (placing a piece on the vertex), on your second turn you must place a piece ONE LINE AWAY from your existing piece. For example you could do this:


If we fast forward the game, we can see that the game might look something like this:


If it is Green's turn, Green can do this: 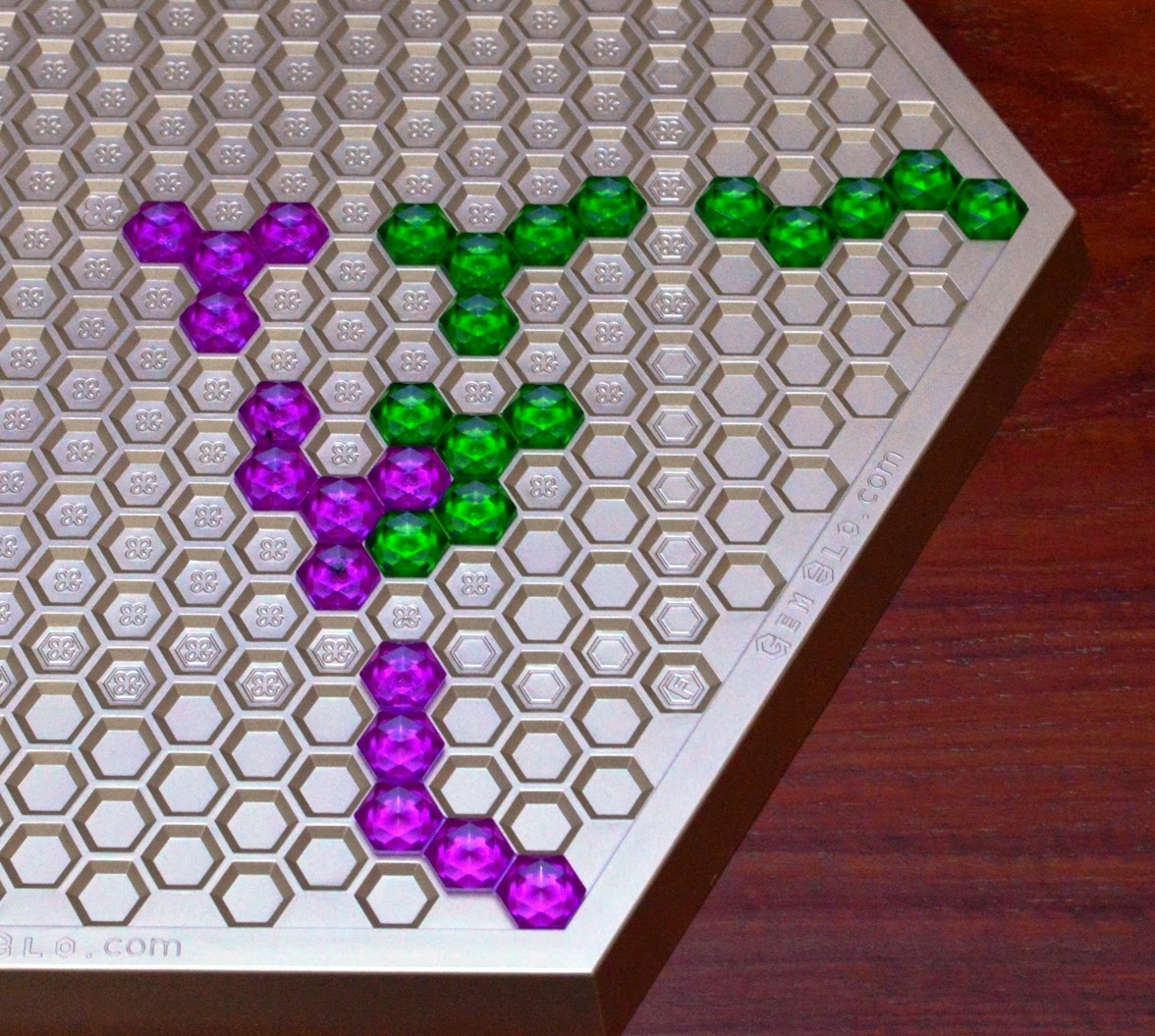 Adjacent to other colours: Hence, just like in Blokus, it is fine to be adjacent or "touching" or "not being one line away" from DIFFERENT coloured pieces, so long as your OWN COLOURED PIECES are one line away from each other (as above).

Illegal move: However, when pieces are "one line away" from each other, the line itself CANNOT PASS THROUGH another coloured piece. For example this addition of the 5 block "l" shape is illegal:

However, the line CAN pass BETWEEN two different coloured pieces like so: 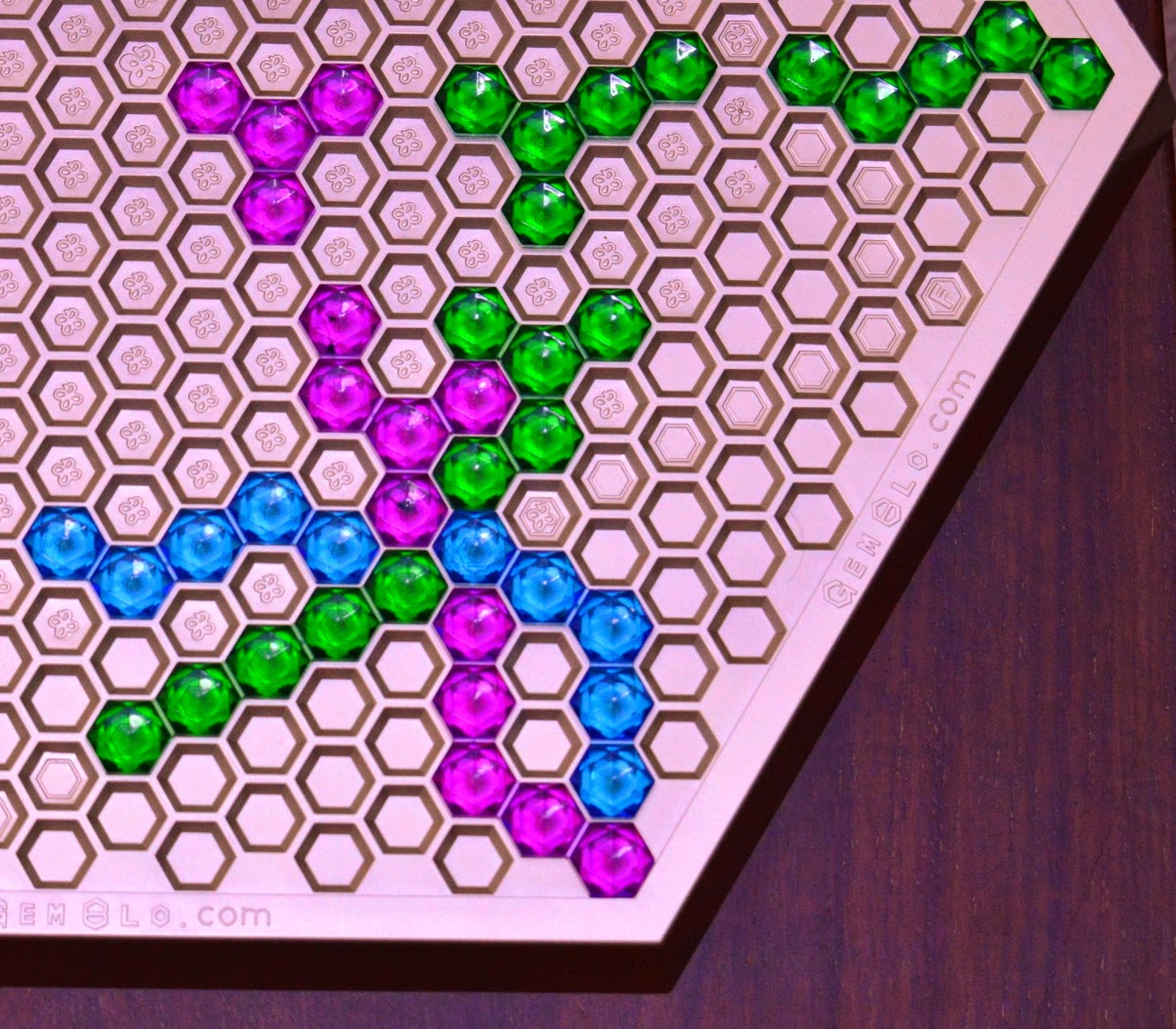 Here, the Green 5 line piece has been legitimately placed - there still exists a line "outside" or "in-between" the pink and blue pieces (as a borderline of sorts).

Scoring: You win if you have the least number of hexagons (I am assuming smaller hexagon shapes that comprise the block, rather than entire pieces/blocks). If there is a tie there are special rules to resolve the tie which I can't understand because they are in Korean. However, it seems as though certain shapes are worth a higher penalty than others.

The game has solo puzzles for you to perform, by way of a book that shows you pictures you can create and the pieces you need to do it. 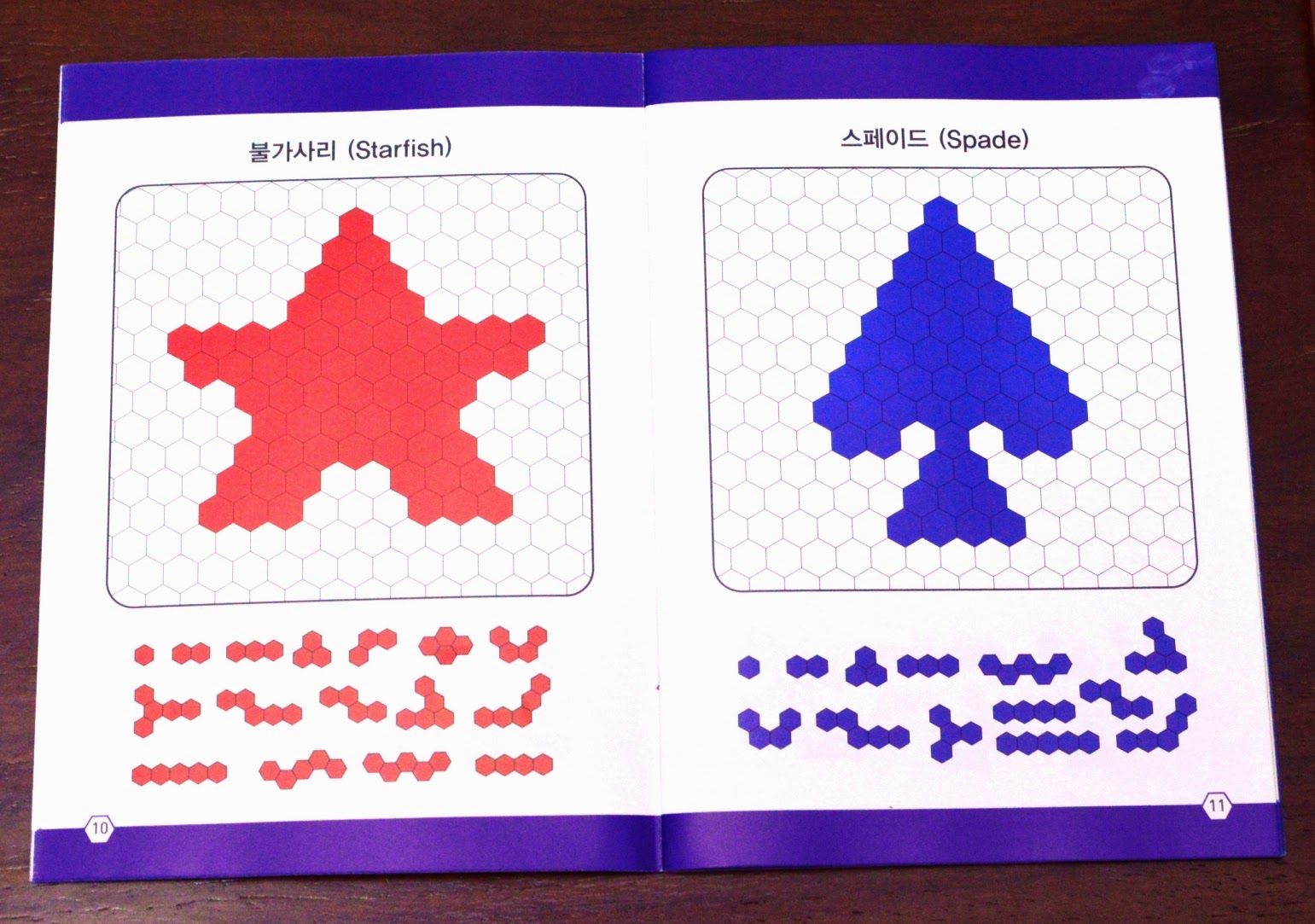 The game also has a mini-expansion. Mine came as part of the deal. Various power-up cards can be played that let you do things that you wouldn't normally be allowed to do. 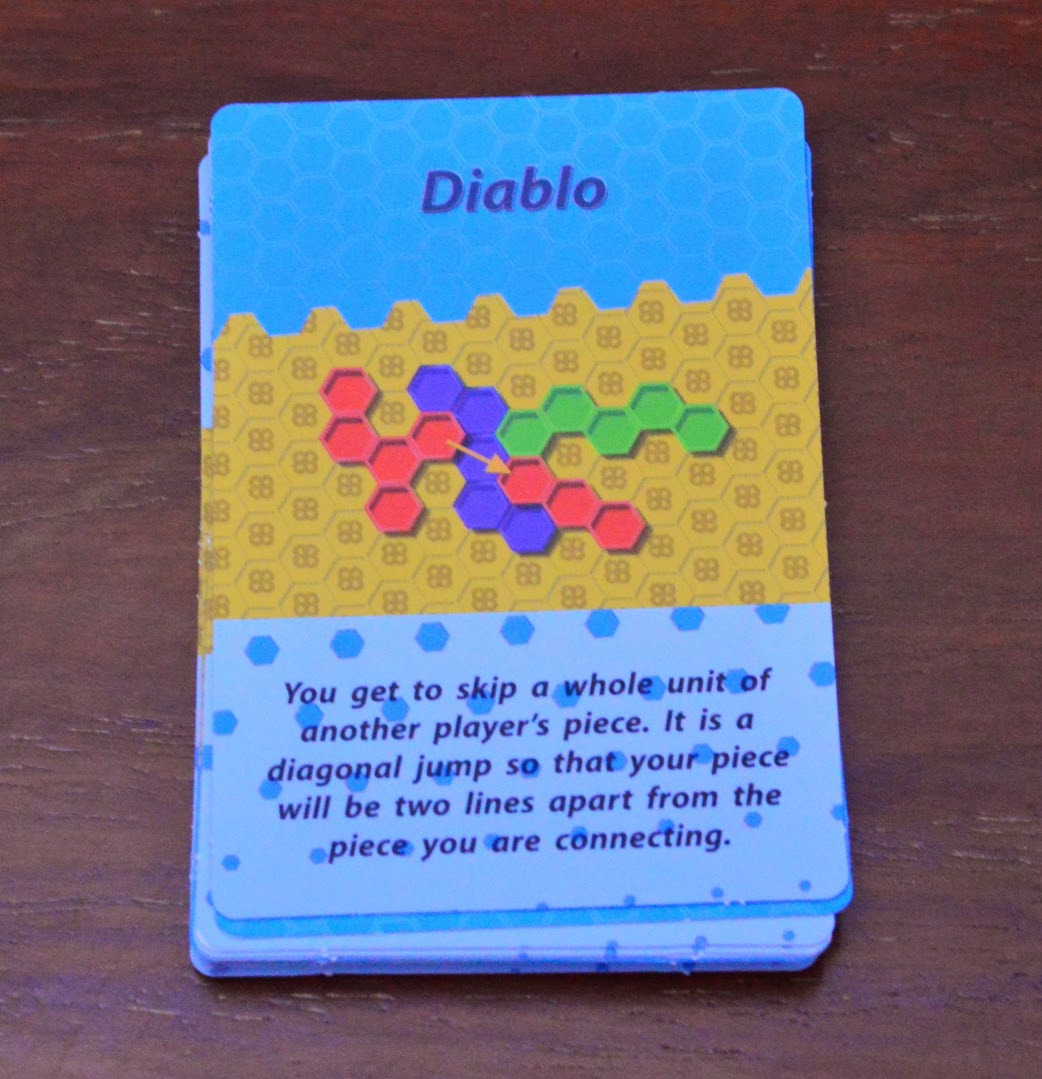