The quintessential gambler's game, except without real money. 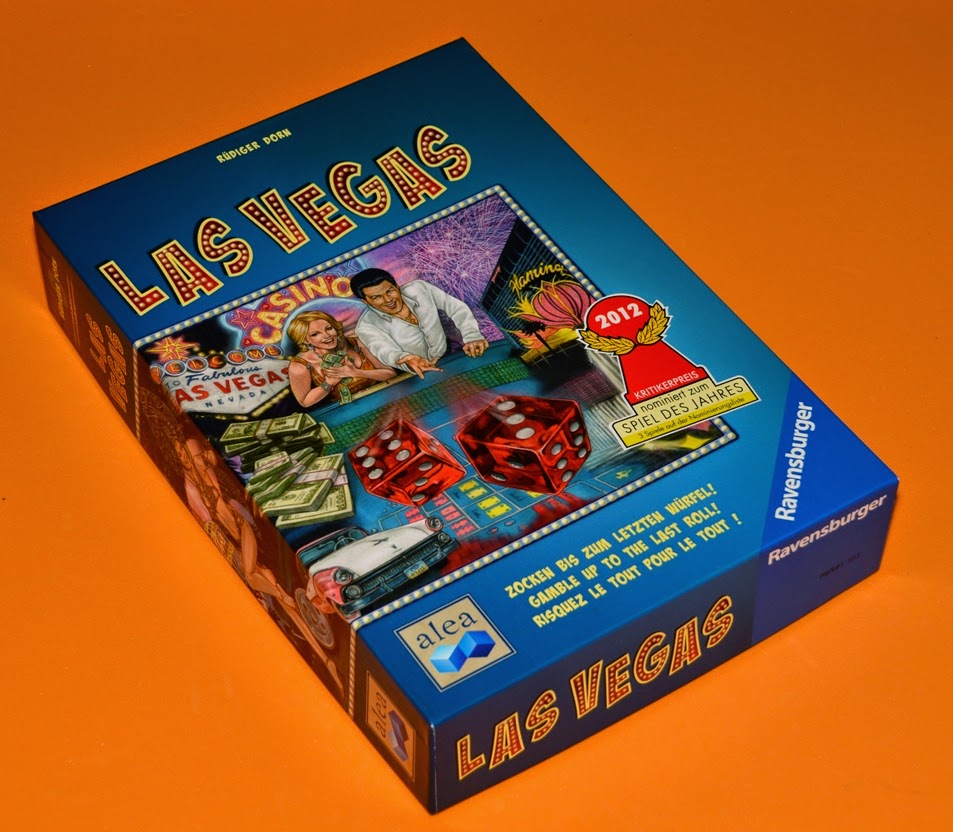 Availability: Quite hard to find. Going online (eg. eBay) or through a hobbyist game shop might be your best bet.

This is a go-to game of sorts for me: so far, everyone I've shown it to has either liked it or were quite interested with its general gameplay. Thus, from my experience, it carries quite a rare distinction for being well-liked.

Basically in this game everyone rolls a set of 8 dice and a bidding war ensues: After you roll, you group like or matching dice together (eg. three 1's, two 4's etc). You use MATCHING dice to bid for certain amounts of money laid out on the table in a manner that corresponds to the numerical values of the dice (see Rules for clarification).  Whoever gets the most cash over 4 rounds wins.

There is some degree of strategy here but it is quite minimal - however, because each player gets to roll their remaining dice so many times, there is still plenty of decision-making to do.

It's often the case that if you can quietly claim the smaller amounts of money on the table (without attracting too much attention) this can work to your benefit whilst everyone squabbles over the large sums; alternatively, you can choose to go all-out and compete for the large sums that you know EVERYONE will be targeting - which is a risky endeavour because you may end up losing everything.

The best part of this game though is the idea that everyone could get NOTHING. If your bid ties with someone else's bid, both of you get NOTHING.

This is a good game if you're after some lively fun in a party-like atmosphere.

The element of chance inherent in rolling dice coupled with the heavy bidding wars over sums of money makes for an interesting atmosphere.

Everyone gets 8 dice of the same colour from this selection:

Note: The money was randomly distributed here, but what you do is you keep dealing cash until you reach at least $50,000 for each number panel/board.

Note 1: You win money by having the most number of dice on a particular panel (see below)

Note 2: When winning money, players only win the money with the greatest value - they don't win all the money there.

Someone is selected to be the "star player" - this means they roll first this round.

So suppose White rolls this set of 8 dice like so: 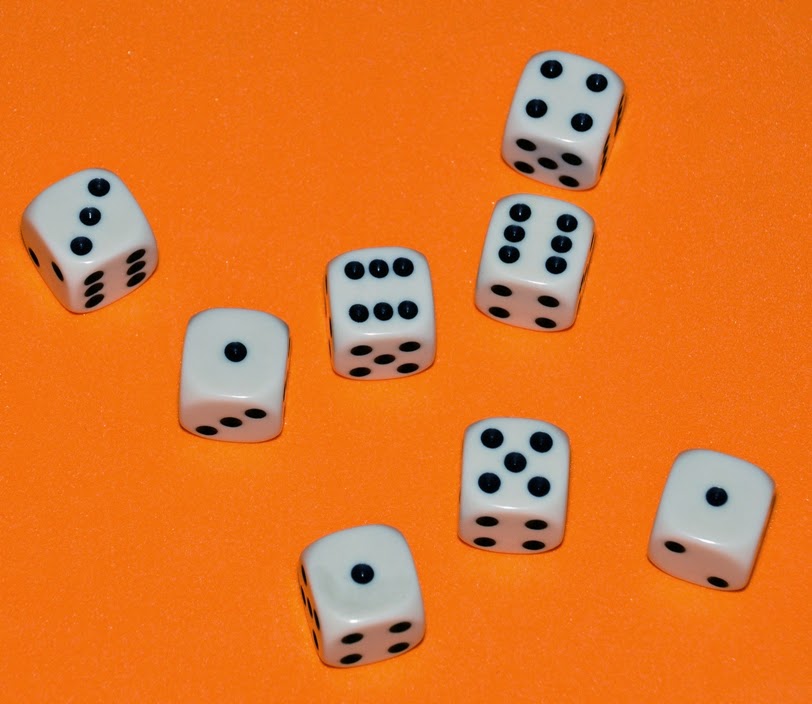 White must then GROUP the dice into MATCHING numbers like so: 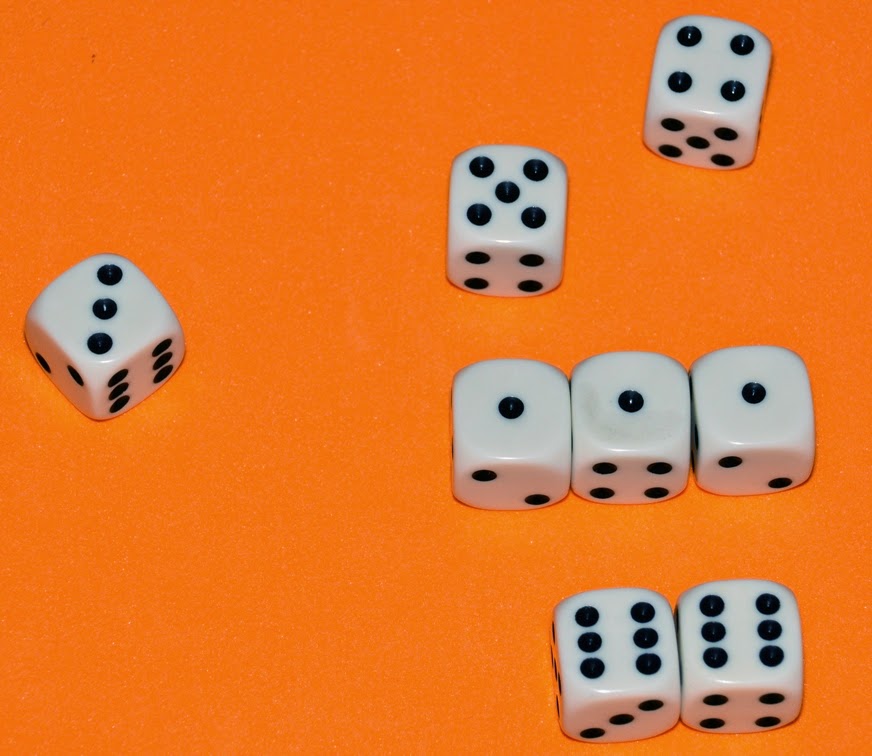 White has grouped together:

Hence, White could place her Three 1's to bid for the 40k (she can't place Two 1's - she must place all three). However, this would be a waste of dice for such a relatively low sum of money.

However, here, White places her Two 6's to bid for the 70k - which is a reasonable move: 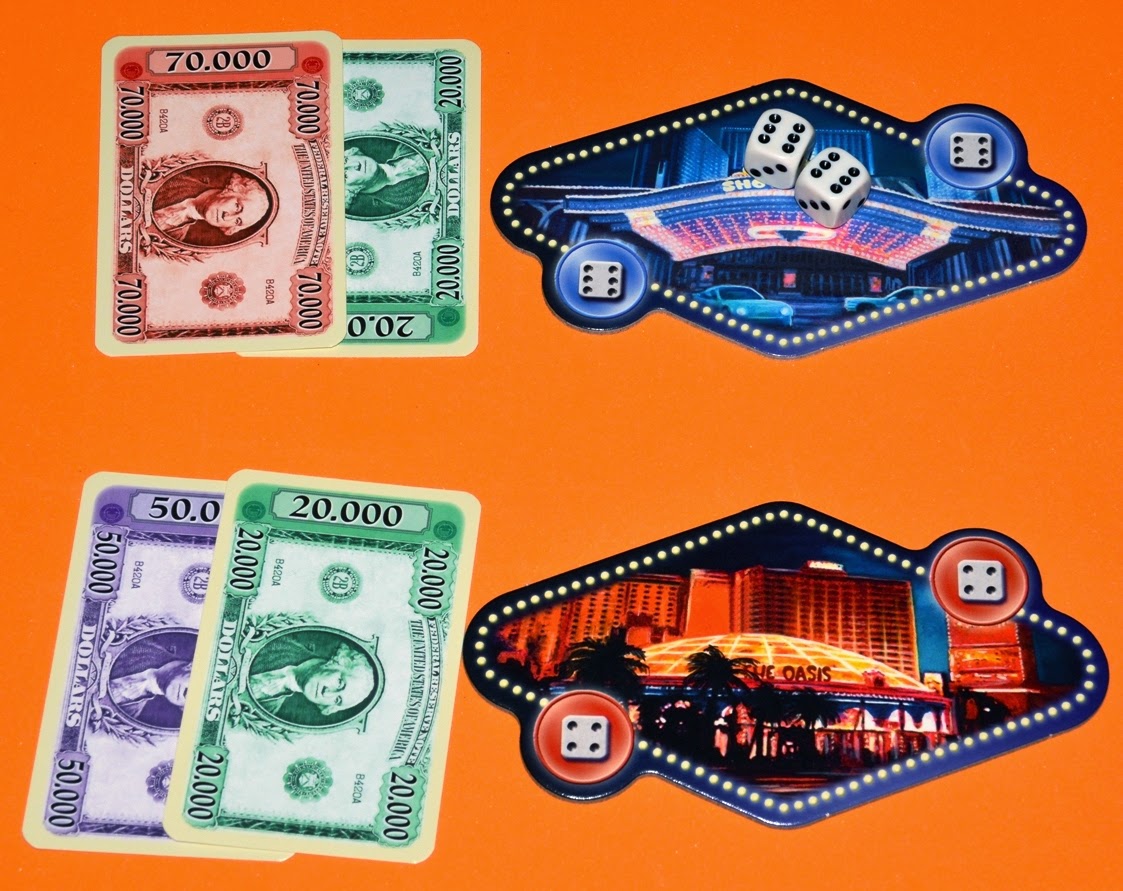 Then it is Red's turn to roll.

Red does the same thing as White and groups numbers together (I won't show his roll here).

But suppose Red only has a Lone "6" die and decides to put it on like so:

If the game finished like this, White would receive the 70k and Red receives the 20k at the end of this round.

However, let's introduce Green into the mix - Suppose after rolling, Green gets Two 6's. She decides to put down her dice like so:

In this case, if the game ended now, Green and White are TIED. Hence, they both get NOTHING. Red gets the 70k instead.

[And so, assume the other two colours Black and Blue have rolled and they have, rather wisely (choosing to stay out of the fray)  placed their dice on other numbers on the board.]

It is White's turn to roll again, followed by Red, followed by Green.
Again, Black and Blue have decided to stay out of this - they've placed their dice on other parts of the board which I won't show.

Hence, if the game ended here, Red again wins the 70k and the other two (White and Green) will get nothing.

The pattern continues: Everyone keeps rolling their remaining dice in turn order, observing the above rule about choosing ALL dice of the same numerical value chosen, until no one has dice left.

Then the monies are distributed around according to who won. This is the end of Round 1.

So for this particular board, if this was the end of the round:

Here White is first: White gets 70k
Green is second: Green gets 20k
There is no third place in this particular board: Red gets zero.

And then for Round 2 the whole process is repeated (clear the boards; re-fill the boards with monies up to at least 50k; the next person becomes the "star player"; everyone rolls dice in turn order until no one has dice left)

Whoever has the most amount of money, after say, 4 rounds (or however many you want) is the winner.

If you're playing with less than 5 players, you can choose to use White as neutral dice (everyone receives a certain amount of White dice that they roll together with their normal dice). These neutral dice act like an extra player except if the neutral dice wins, no one gets the money (it can be useful to stop other players from winning).