A cute card game that demands the power of observation. 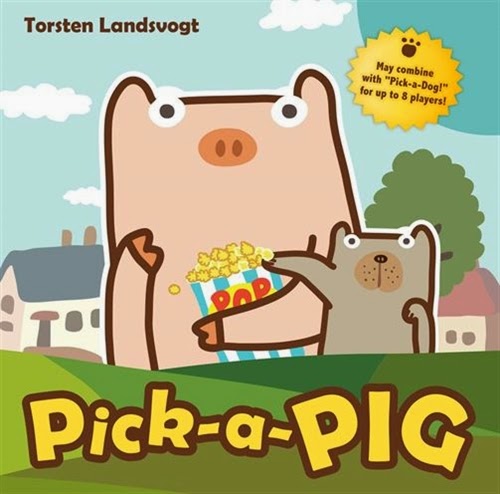 Expansions/Counterparts: Pick-a-dog or Pick-a-polar bear has largely the same themes and can be combined with Pick-a-pig to accomodate more players (apparently up to 8)

Players: 1 to 5 (but you can buy Pick-a-dog or Pick-a-polar bear to increase the numbers)

Availability: Unsure - it seems quite unheard of and I only see it online (such as on eBay or Fishpond for example); but many online sites sell it for quite a dear price.

This is a deviously simple game. Cards are arranged in a 5 x 6 formation.

Each player receives a starting card face down. The card has a picture of a pig/dog/polar bear with random characteristics/features.

From then on, players must pick a sequence of cards in such a way that the next card selected always has only ONCE difference as compared to the prior card.

My main concern is that the game's replay value is quite lacking - it also takes quite a long time to check to see if EVERYONE has observed the rules correctly at the end of each round (see the Rules section to understand what I mean). The novelty of picking up cards will wear out after a while and I don't think the game has sufficient "meat" for it to be considered to be a decent game.

This is an enjoyable game, even if only for a short while. Testing the sharpness of your observation skills and your reflexes in a mildly competitive environment makes for some interesting games - it is a good game to try once or twice (or more, if you are into this kind of thing).

Set-up is quite simple.

5 rows of 6 cards are dealt face up like so: 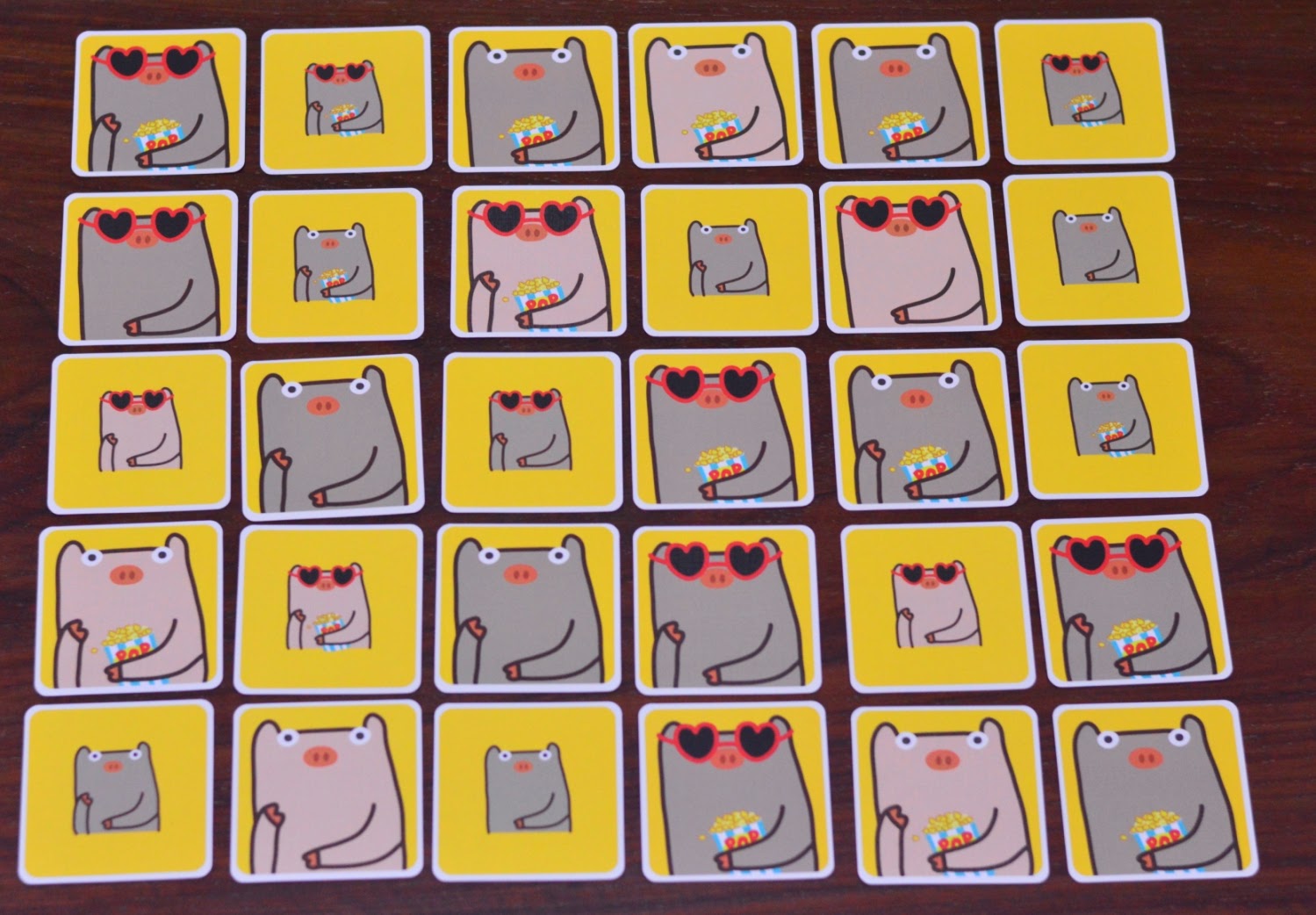 Everyone gets a "captain" or "starting card" FACE DOWN.

Then (perhaps after a countdown) everyone reveals their starting cards. The chaotic rush begins.

From then on, EVERY player (at the same time as everyone else) must follow the following steps:

1) Pick a card that contains an image that is only ONE (and only ONE) difference away OR has no difference at all as compared to the starting card.

You will note that there are only 5 attributes that can be differentiated:
- Colour of pig (dark or light)
- Whether pig has one arm/two arms
- Size of pig (big or small)
- Wearing Sunglasses or not
- Holding Popcorn or not

3) Repeat Step 2) infinitely until there are no more cards left for you to pick without violating Rule 2).

Go quickly - the more cards you pick up whilst observing the above rules, the more points you will get.

Suppose this was your starting card 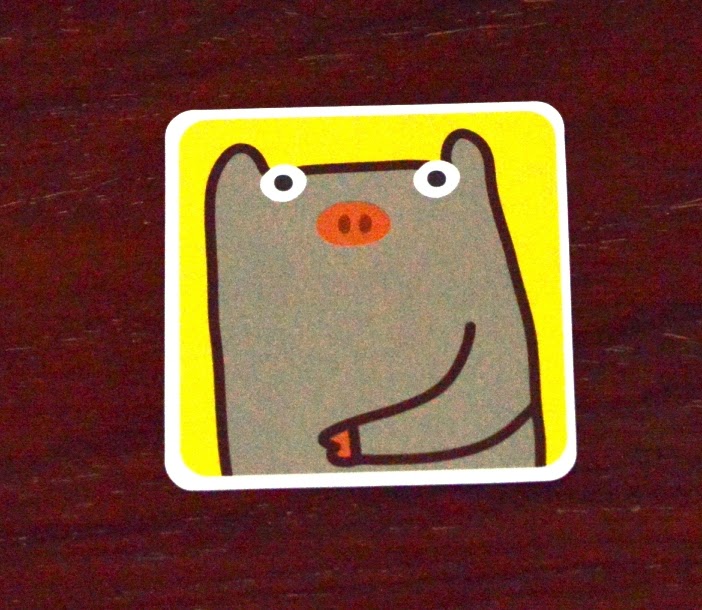 Looking at the above set-up, you would have to pick a pig that is exactly the same as this or has one difference (for example, a dark big pig with two arms or a dark big pig wearing sunglasses with 1 arm).

This is an example of the choices that could be made:

First, you pick the pig 2 from the left and 3 from the bottom (has two arms, rather than one arm - rest of the features are all the same): 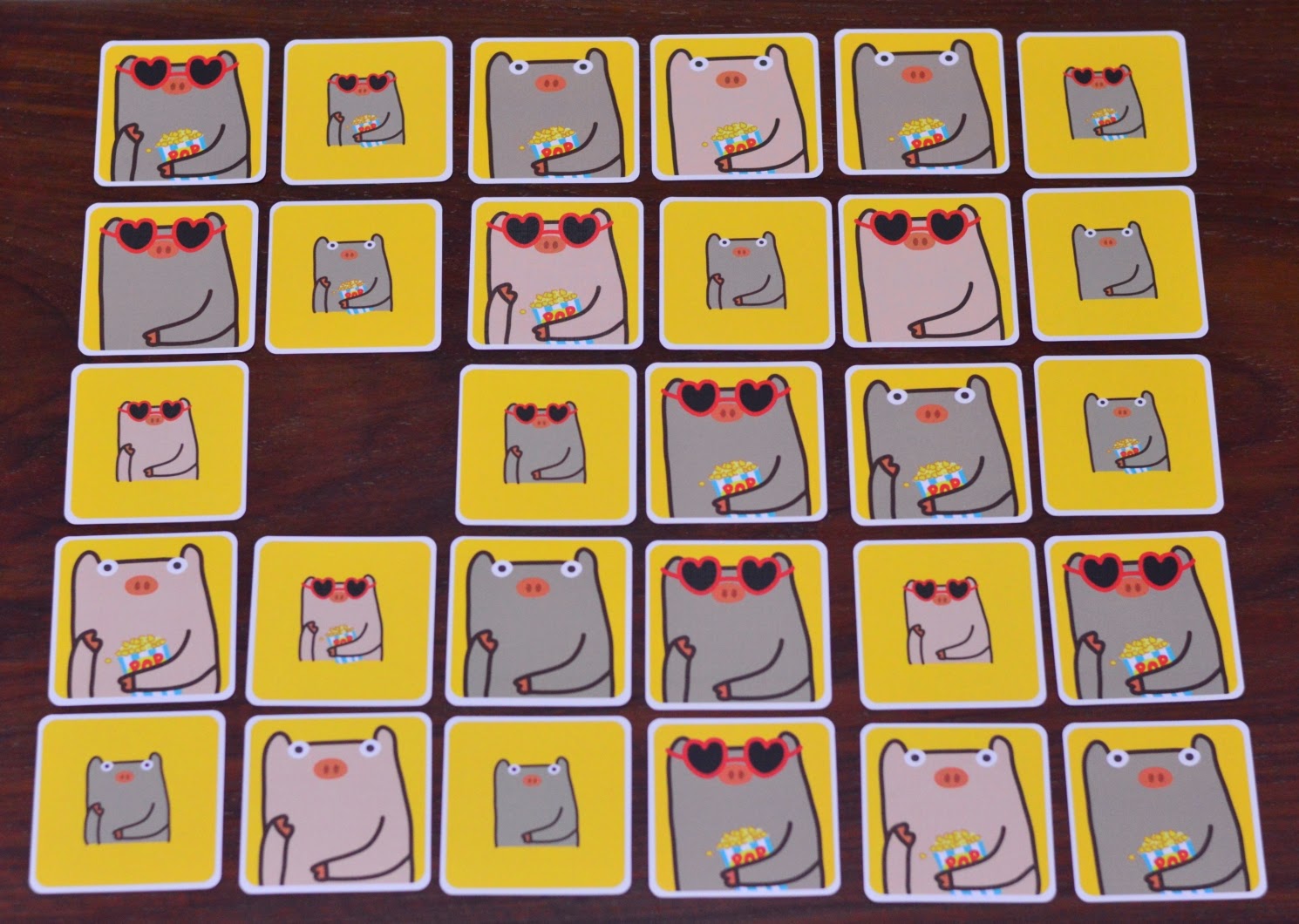 Then you pick the pig diagonally adjacent to that pig, as it's exactly the same card: 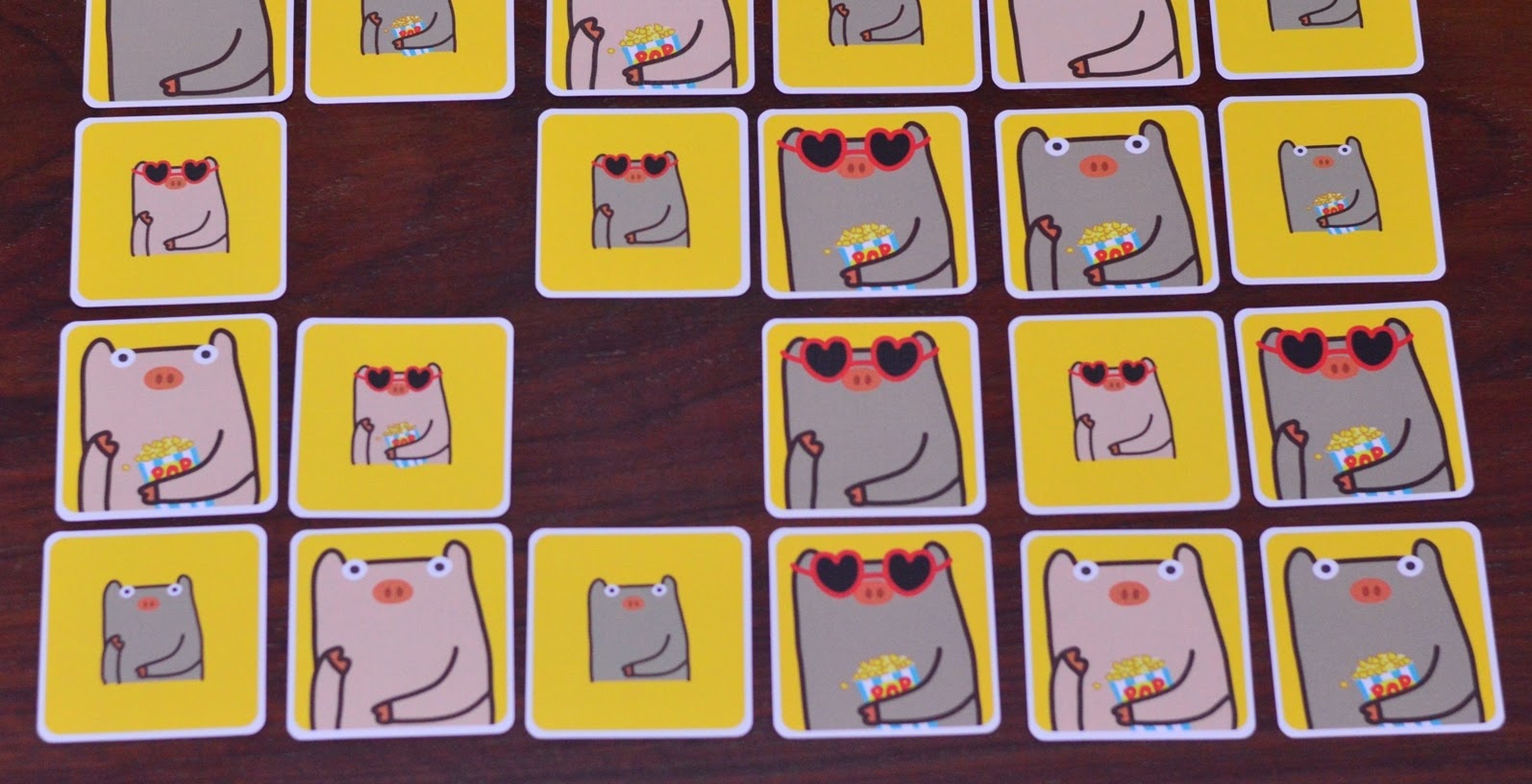 Then you pick the one directly on the right, as that card only has one additional feature of wearing sunglasses as compared to the card you just picked up: 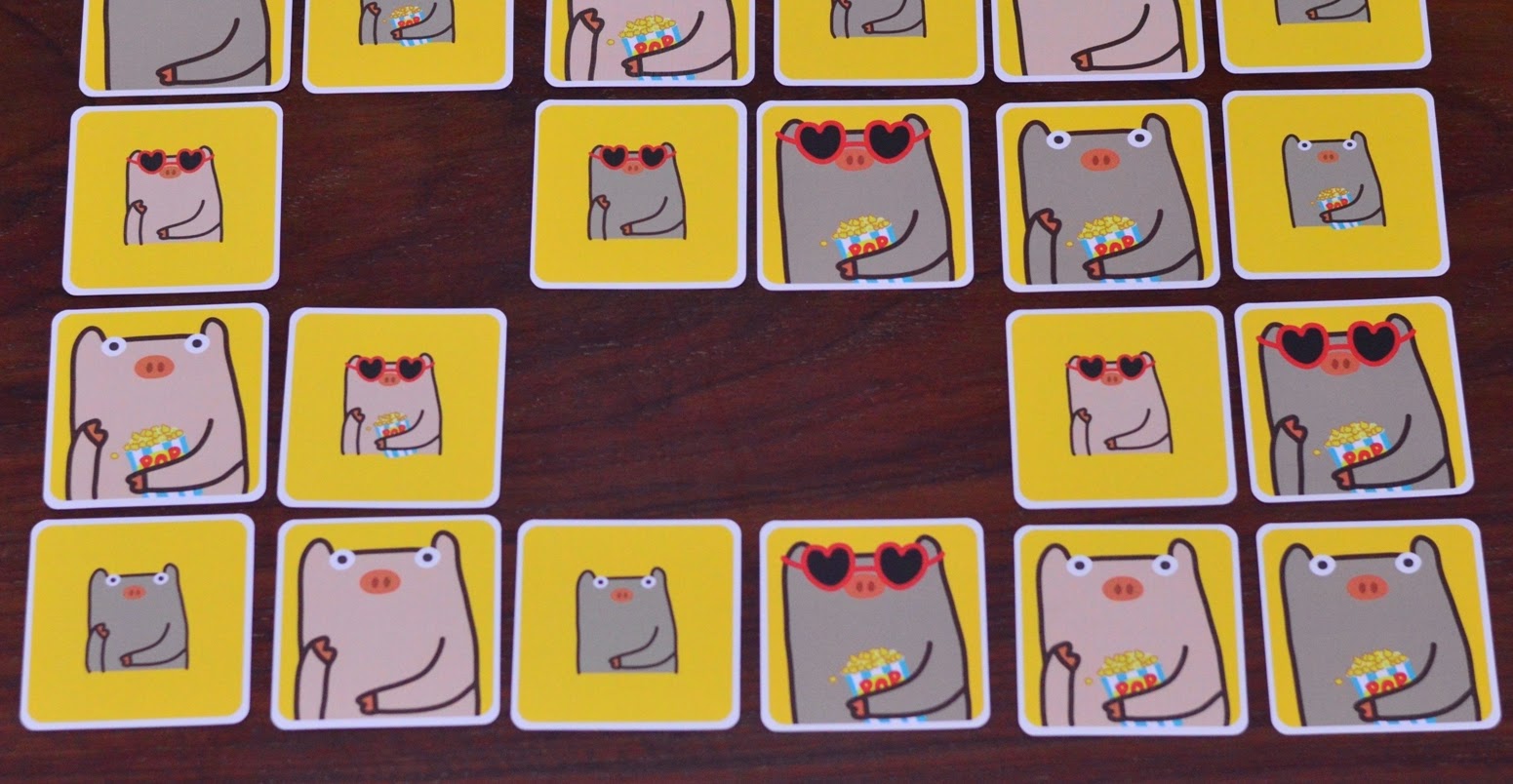 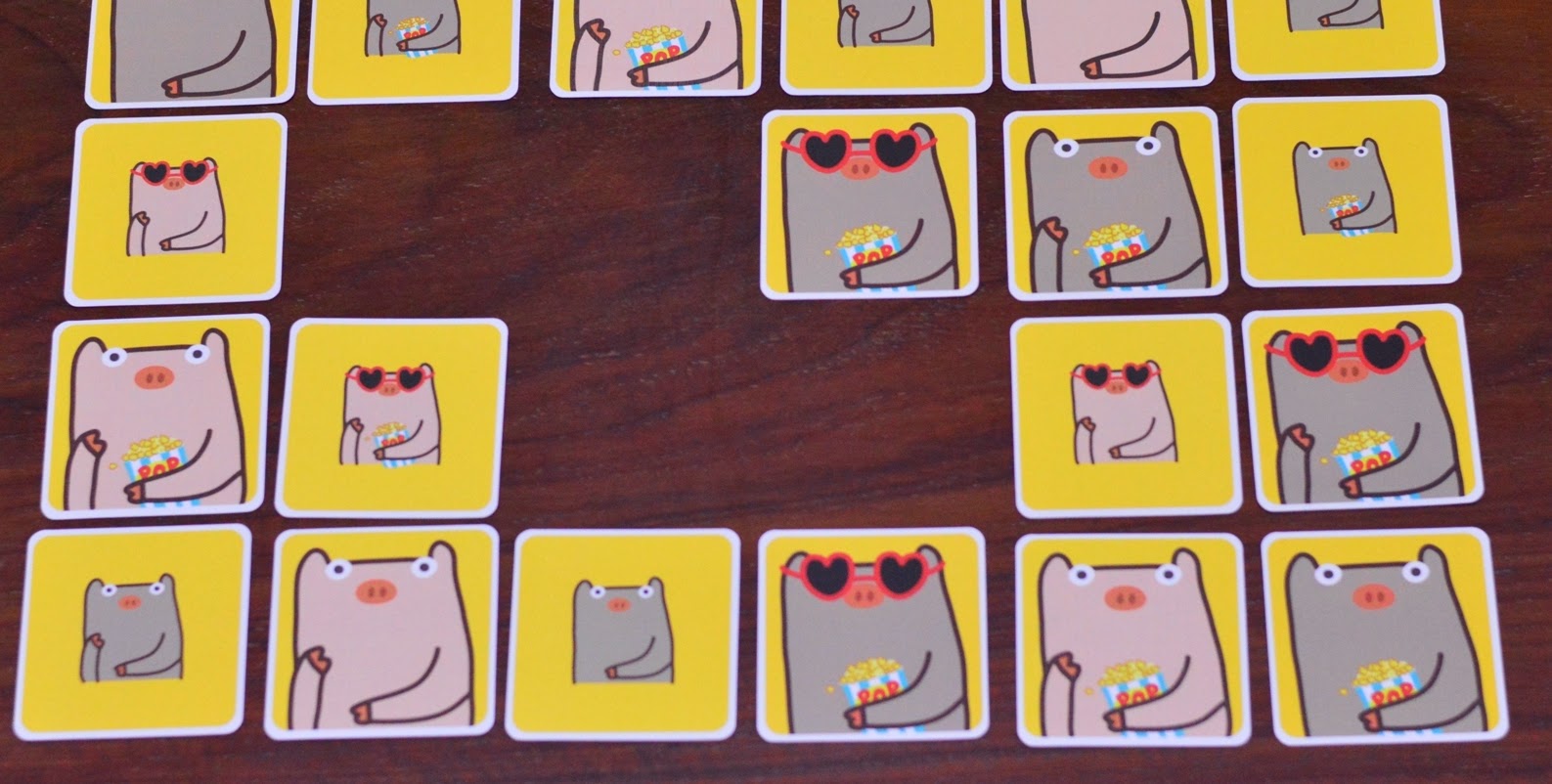 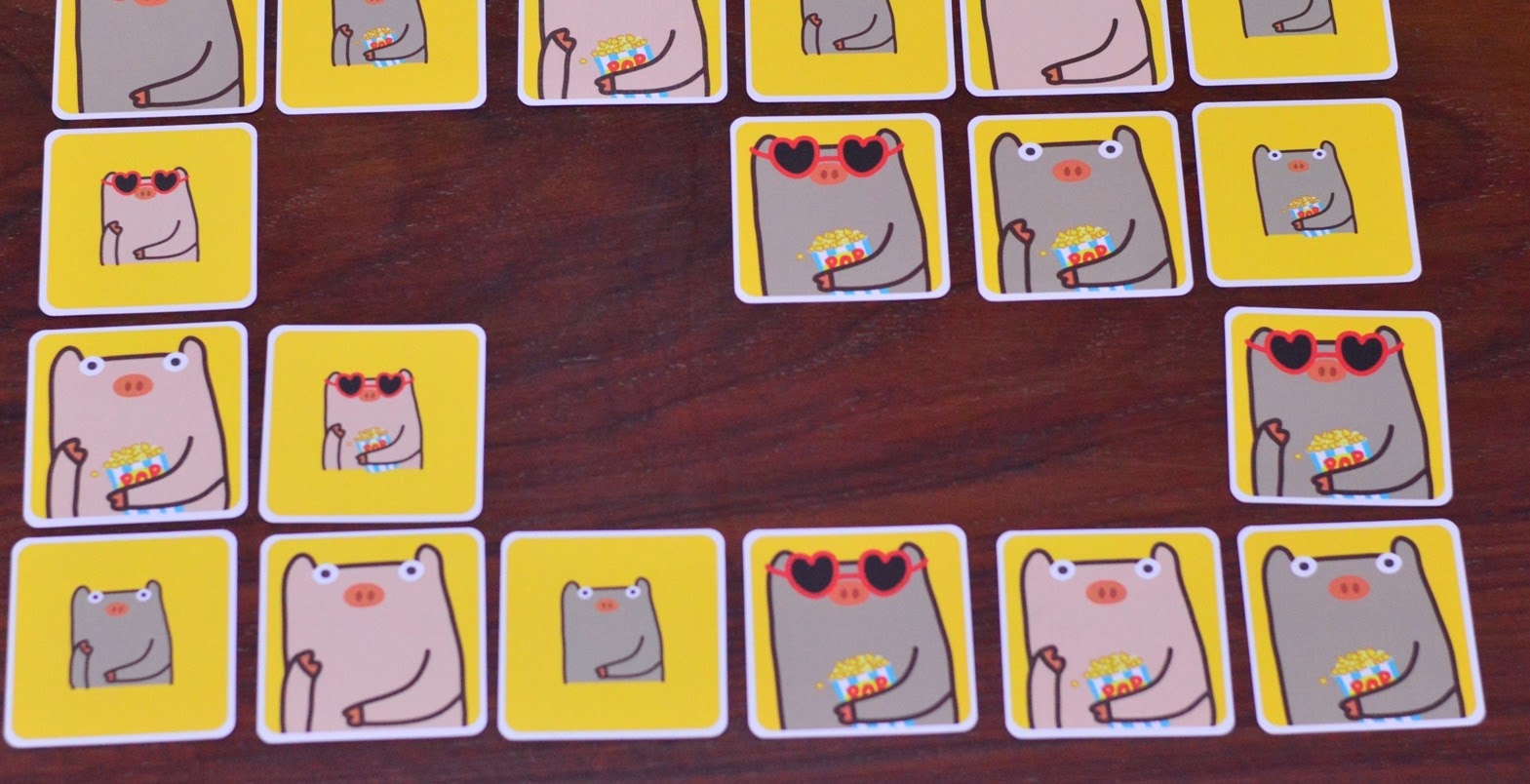 Thus far, you have collected all these cards (and you can keep going if you want to - but note that you aren't allowed to spread them out in a row like this - you only do this at the end of the round; I am just showing you this to help you understand the game):

4) When you are confident that no other cards exist that match the above rules, yell STOP. Everyone must stop picking cards. Everyone now checks to see if the person who yelled "stop" truly had no more cards left to choose - if correct, they get an extra card as a bonus. If wrong (ie. if you called out stop when you had more cards to collect), you lose all your cards!!!

5) Then all players must be "checked" to see that they have picked up their cards in the right sequence [ie. their sequence of cards must observe rules 1) to 3)]. IF YOU HAVE EVEN ONE CARD OUT OF ORDER YOU LOSE ALL YOUR CARDS - hence this, together with Rule 4), is quite a punishing rule (it forces players to consider whether they should opt for inaccuracy with speed or slowness but certain points).


6) If a player has indeed picked up their cards in the right order (as in Figure A above), then they score 1 point for each card they have in their hand. In Figure A, if that was the end of the round that person would get 6 points (if they called stop, they get 7 points)