A French take on Jack the Ripper 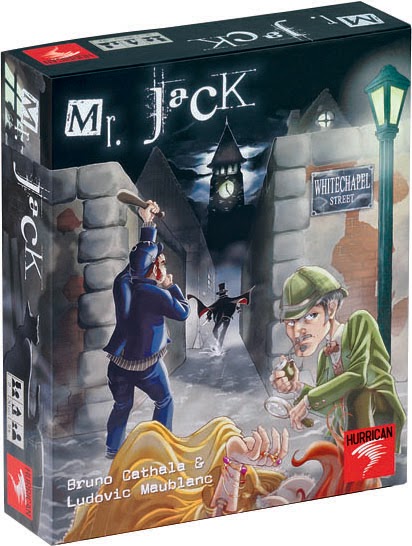 Age: 9+ according to the box, but this game is really quite hard - I think you need to be older to get the hang of this

Availability:  Last time I checked, reasonably available online but some sources, including the publisher of the game itself, suggest that the game is quite "rare".

This used to be* one of my favourite 2 player games - it is actually quite a well-designed game and probably does not receive the attention or appreciation it deserves.

There are two roles: An Inspector/Detective (who has to guess/determine who Jack the Ripper is out of 8 suspects) and Mr. Jack (who must prevent the Inspector from finding Jack). The deduction required from being the Inspector is quite fascinating and the constant mental duels with Mr.Jack can make for a very tense game.

Playing as Mr.Jack is quite hard as he must, on one hand, not draw too much attention to who Jack is and, on the other hand, spread the suspicion evenly amongst all suspects; the player playing "Jack" will definitely lose more often than not if both players are beginners (that said, even if both players are experienced - I still think Jack will probably lose more than the Inspector). This is because if Jack even makes one mistake (such as leaving Jack exposed or vulnerable on the Inspector's turn) the game can potentially be over in a flash. In contrast, if the Inspector makes a mistake, it is often not fatal. There is thus a larger margin of error afforded to the Detective.

The game is better explained in the Rules but basically it involves both Jack and the Inspector separating the 8 suspects into "bright" and "dark" areas; then the Inspector will ask Jack at the end of each round whether he is "seen" (in a bright area or seen by someone else) or "unseen" (in a dark area or away from the gaze of other suspects). There is a bit of artificiality in this in that both Jack and the Inspector control the suspects, despite the odd fact that Jack IS one of the suspects.

The best games are those games where one player's victory literally comes down to the wire - for example, coming down to a 50/50 guess. Overall I think this is a great game - at first I thought it was an excellent game, but there are some frustrating moments where Jack can't actually do much to reduce the number of suspects that are ruled out.

* July and September 2014: Reduced from 8.55+. Sure, it's a unique game in that it provides lots of tension and fun and is certainly up there in the two-player genre of games. There is also ample scope for bluffing in this game, which is fantastic. But there is only so much in your control if you are Jack for reasons given above. To that extent, it's not as strategic as one might think. A player might find this game frustrating more than anything else if they are Jack - but I suppose that's what keeps this game fun as it makes the game challenging for one player. I don't think I have the heart to score this anything higher than 7.25.

Trying to figure out which one of the 8 suspects is Jack the Ripper in the Whitechapel district, via an epic head-to-head battle makes for a great gaming experience for two.

I don't intend to demonstrate turn-by-turn what happens in this game - I just want to present an overview of the basic game mechanics to give readers a flavour for what is involved.

Note that, before you start your first game, you'll have to manually assign the stickers to the coloured tokens - the game tells you which faces go with which colour.

The game board is set up like this (as helpfully demonstrated by the game manual):

Determining who Jack the Ripper is

Someone nominates to be Jack the Ripper (aka Mr. Jack or simply Jack). The player playing as Mr.Jack takes one red alibi card from this deck below: 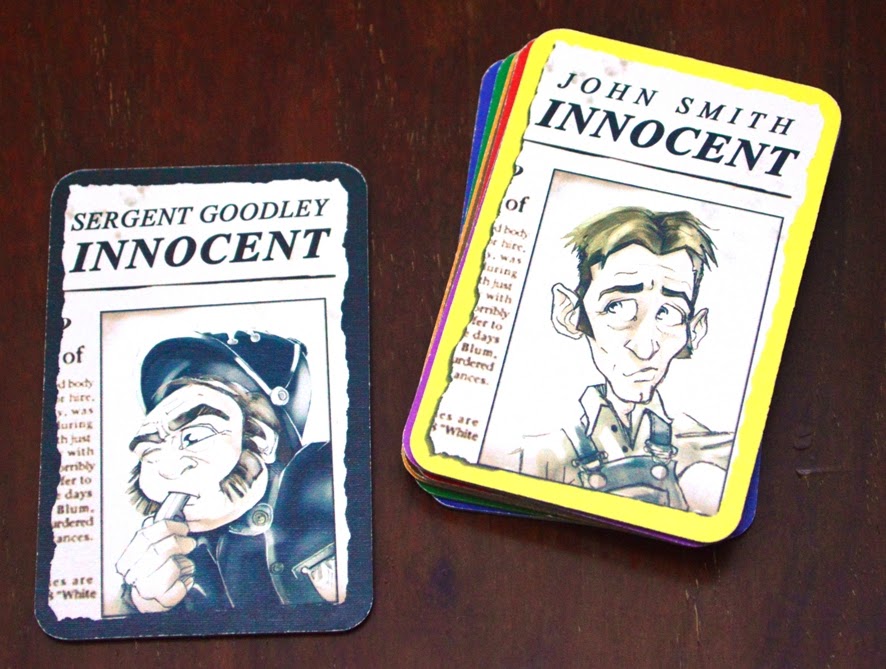 This alibi card received is the identity of who Jack the Ripper is.

Aim: The Inspector's aim is to, before the end of the 8th turn, CATCH this person that Jack has taken as their identtiy. It is not enough to know who Jack the Ripper is - the Inspector must CATCH the person by using one of the suspects to move on TOP OF Jack.

1) Jack's aim is to not be caught by the end of the 8 turns OR
2) To escape from the district but only if their character is UNSEEN (see below)
3) To cause the Inspector to make the wrong accusation/arrest (the Inspector only has one shot at doing this right - if the Inspector gets it wrong, Jack wins)

The rest of the Alibi cards are placed to one side (as in Exhibit A above) - they represent all the innocent suspects who are NOT Jack. From now on, they must ONLY BE LOOKED AT when SHERLOCK"S POWER IS USED.

You must also become familiar with all the special abilities and movements of all the suspects. By selecting the respective suspect cards below (according to "Turn Order" - see below), the character tokens may be moved around the board and their special abilities activated.

Note that, everyone except for Miss Stealthy can walk 1-3 spaces (or hexagons) [and note also that when ending your move you can't land on someone else's token, unless you are making an arrest].

What happens is, there are 8 turns in total.

Every 2 turns , the 8 suspect cards are shuffled and a group of 4 suspects is randomly distributed. This group of 4 is used for the first of the two turns (eg. Turn 1 - Sherlock, Goodley, Stealthy and Watson as above).

The other group of 4 is put to one side to be used for the second of the two turns (eg.  Turn 2)

After this is done for the first 2 turns, shuffle the cards and repeat the process until 8 turns are completed.

On Odd numbered turns, the Detective gets FIRST CHOICE as to which suspect card to use. Once a card is chosen, that suspect CANNOT BE USED ANYMORE until 2 turns later (it is turned face down after the suspect is moved/used). Then Jack gets to choose the NEXT TWO SUSPECTS to move. Then the Detective gets to move/use the LAST suspect.

So for example, if I was the Detective, I could pick Goodley first, then Jack might pick Stealthy and Watson to move/use, then I would be forced into choosing Sherlock for my last move of the turn.

The Concept of Being Seen or Unseen

You may ask: Why move suspects at all?

The whole point of this game is for the Inspector to separate the suspects into two distinct groups as evenly as possible: Those that are seen or those that are unseen. At the end of each turn the inspector asks Jack: ARE YOU SEEN OR UNSEEN? By splitting the group in such a manner, the Inspector can confirm that some suspects are not Jack the Ripper.

Conversely, Jack is trying to clump all the suspects into the same group (dark/light) so that Jack the Ripper is indiscernible from the main crowd.

What does being seen mean?

Being seen is defined three ways. A suspect is seen if:

1) They are adjacent or standing next to a light/lamp tile (that is, they are on a hexagon whose side is shared with the corresponding side of the lamp tile)

2) They are standing next to the another suspect (intuitively, because each suspect sees the other)

3) They are standing in the path of Watson's lamp (which can be turned to face a particular direciton at the end of Watson's move) - note that houses or fences etc block this light path.

For example, in the picture below, this is the starting position of Smith and Bert - who are both SEEN according to Rule 1: 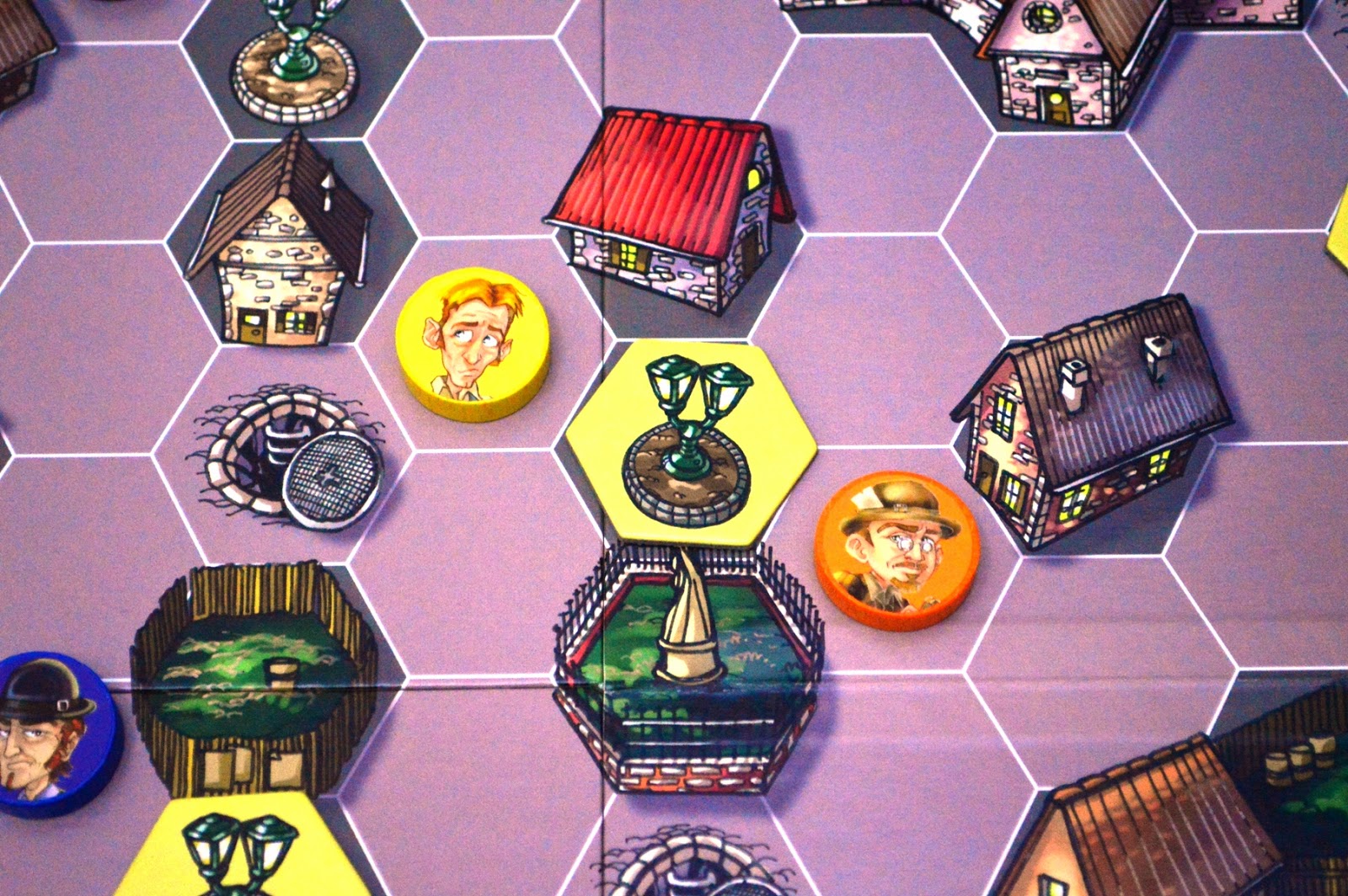 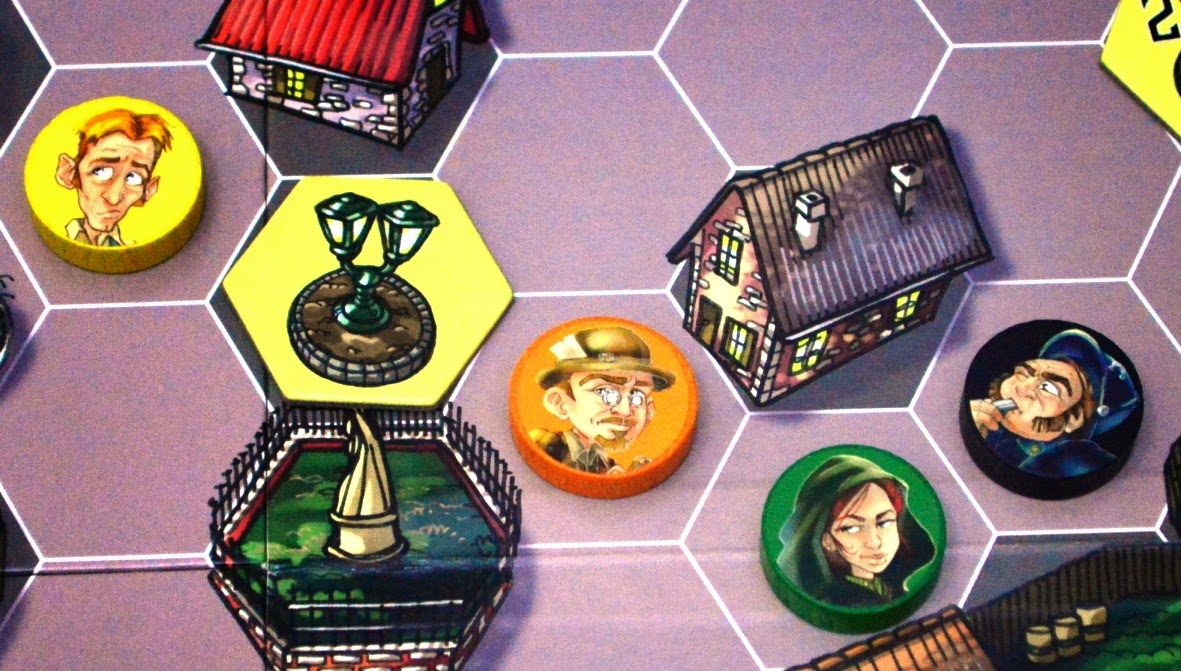 At the start of the game Jack starts off as being SEEN as depicted by this card: 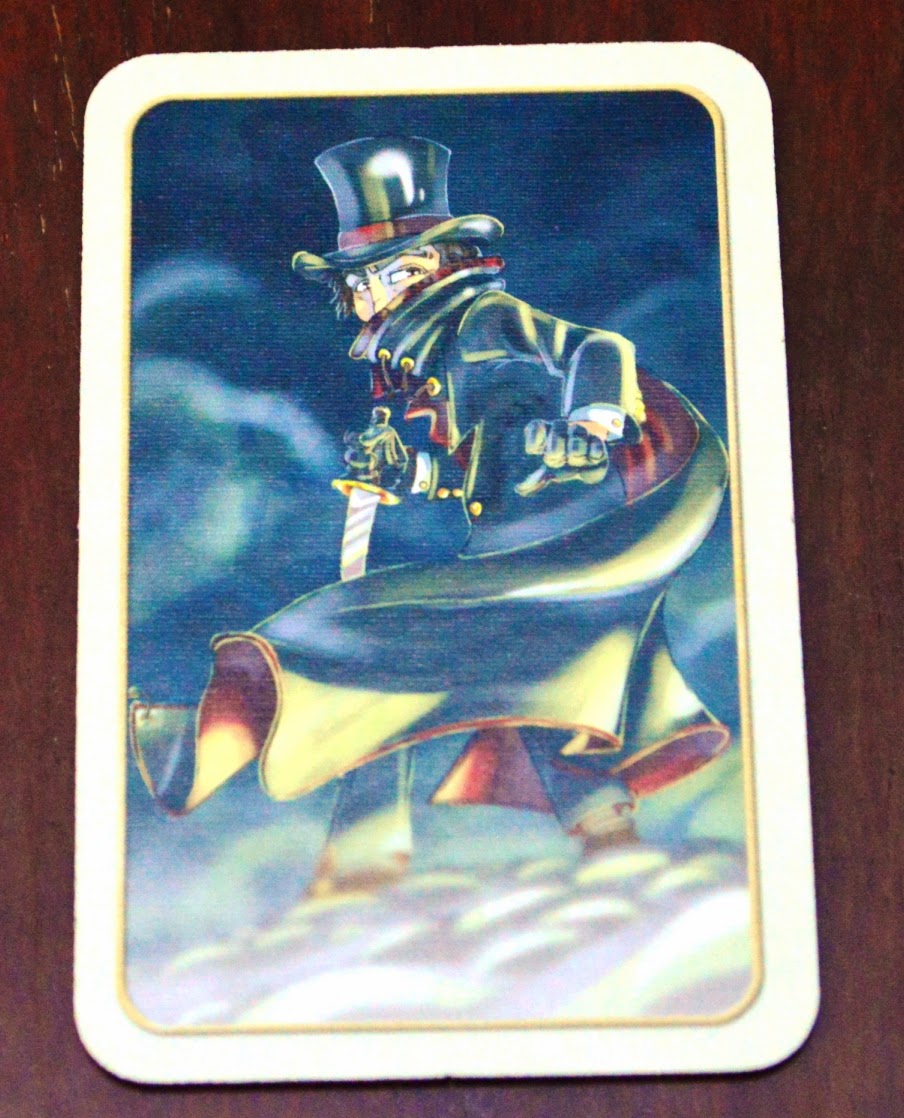 If Jack is ever unseen at the end of a turn, the card is flipped over like so and he may escape the next turn (remember, Jack can only escape if he is unseen): 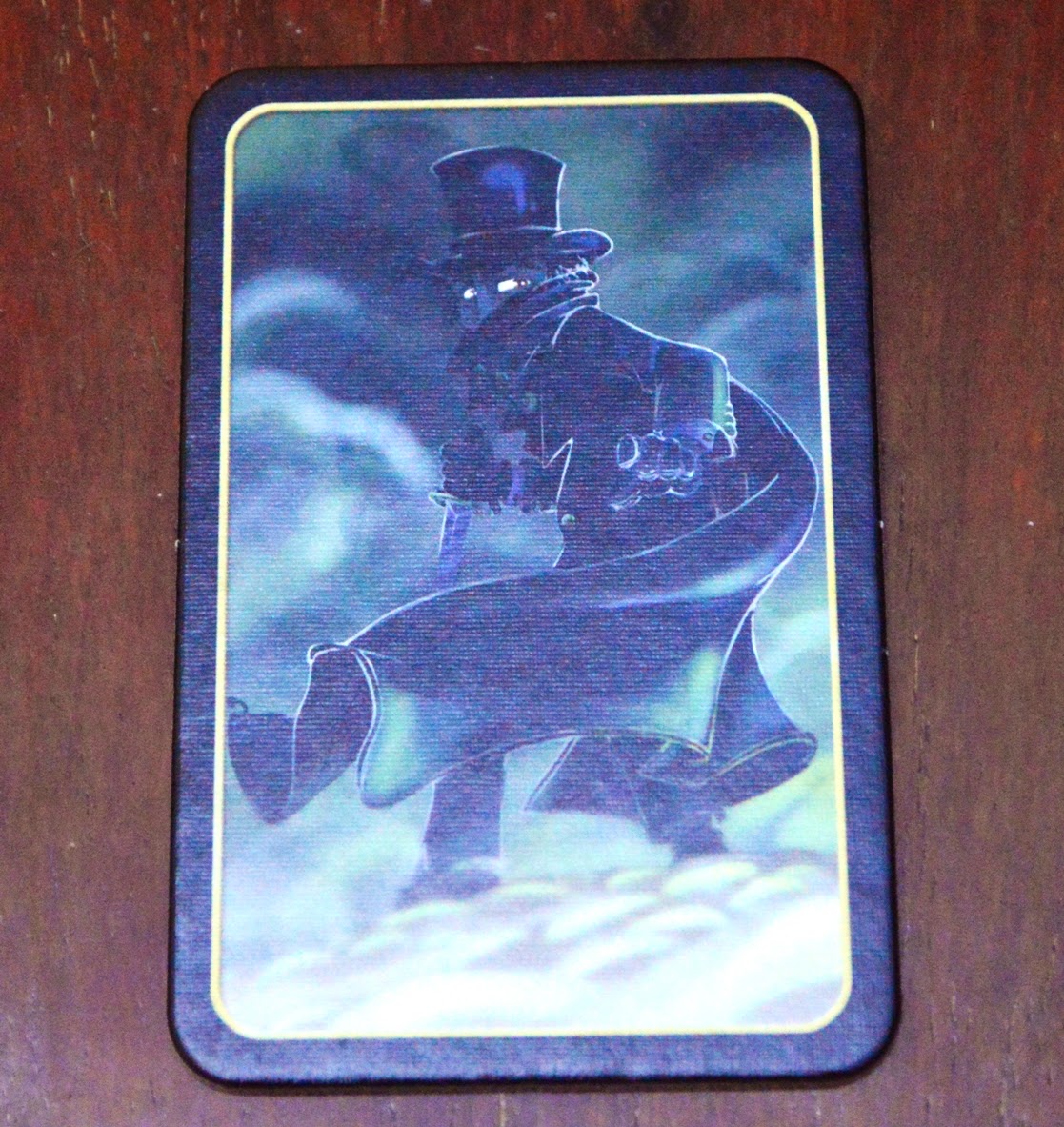 Importantly, at the end of each turn, the Inspector asks Jack if he is seen or unseen.

As a final example - suppose this was the situation at the end of a turn: 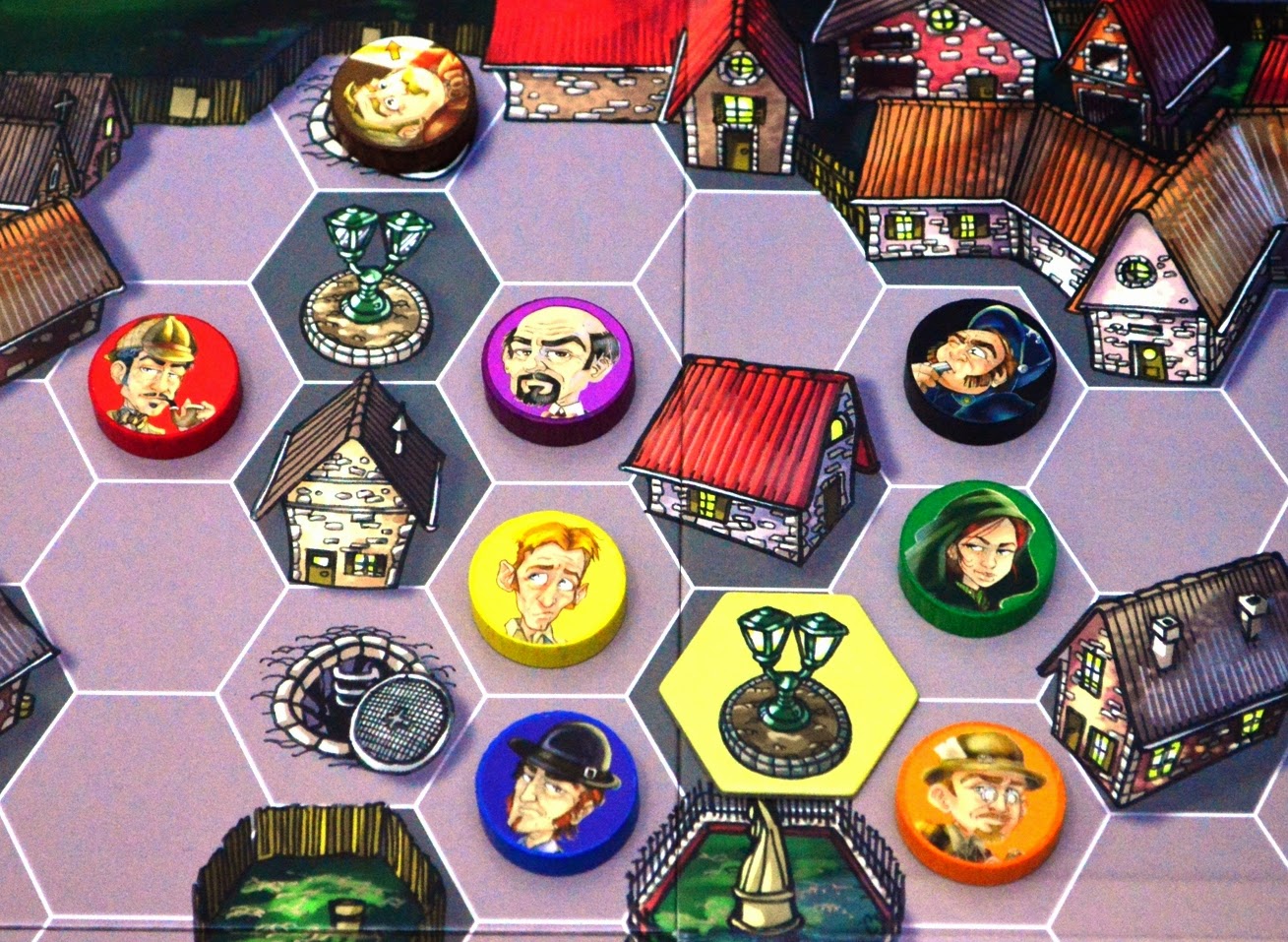 Once asked whether he was seen or unseen, suppose Jack says "Seen".

That means that all the suspects who are unseen are no longer suspects - they cannot be Jack the Ripper as they are not "Seen".

Hence the Inspector would flip over Sherlock and Watson like in the below picture to their dull/white sides to indicate that they aren't Jack the Ripper.

This makes the Inspector's job a bit easier - narrowing the number of suspects by 2. 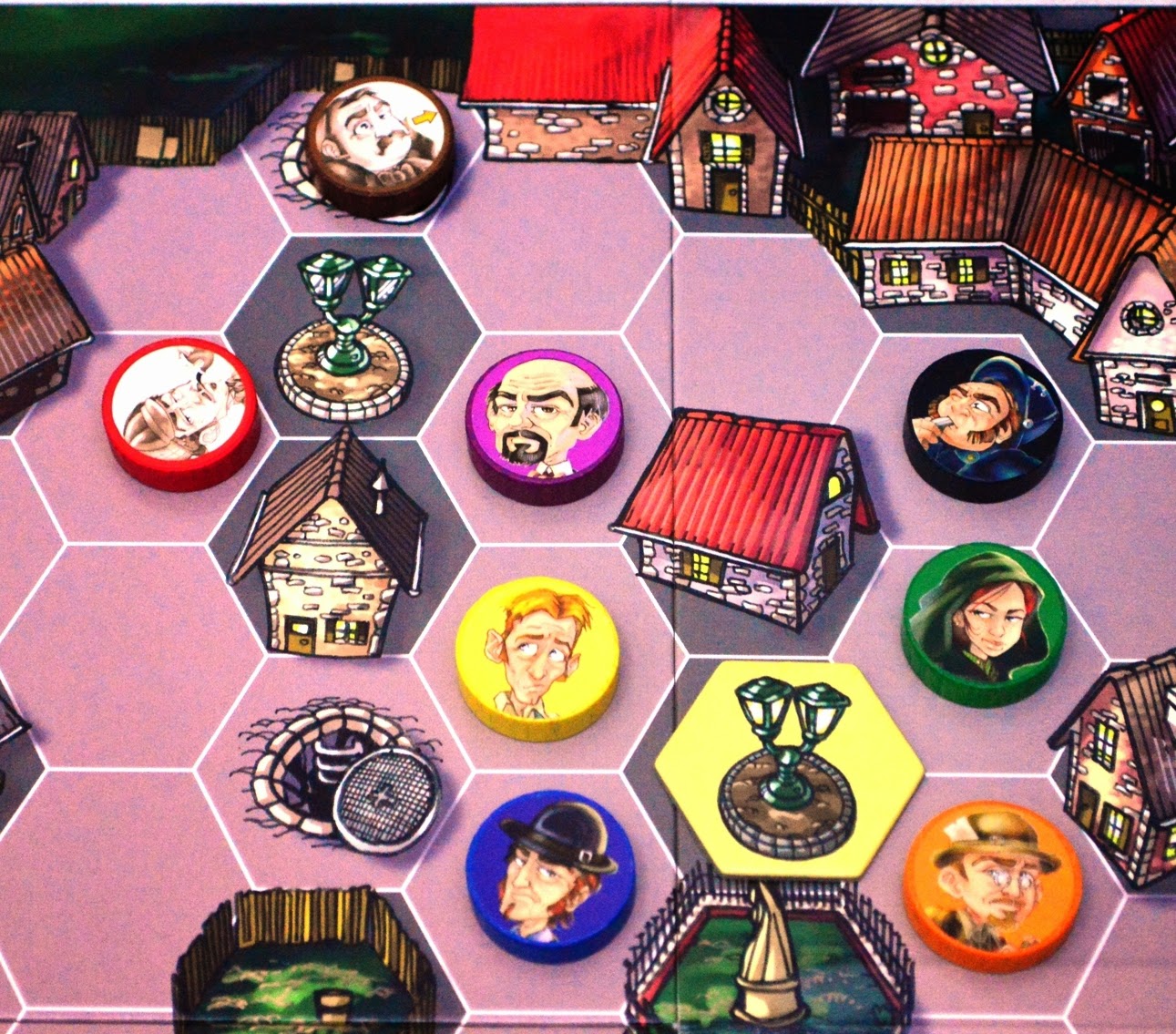 The Inspector may at any stage attempt an arrest but obviously if they do it at the start they only have a 1 in 8 chance of getting it right. To arrest they simply need to move another suspect's token on top of another suspect (when activating that suspect by selecting the relevant character card as talked about in "Turn Order" above). If the Inspector gets it right, he/she wins.