An animated and wobbly stacking game - designed for kids, but still fun for the young at heart.

Animal Upon Animal: Balancing Bridge (2010) (which looks more interesting than the original - I don't own this though)

Price Range (AUD): $32 to $65. The lower end of the range I just game is more reasonable but it's still slightly pricey. The pieces are made from good wood though and are coloured well.

Availability:  Not commonplace but it exists online - just like most games, shipping can make this game unreasonably expensive.

Stack all your animal pieces without collapsing the stack. That is essentially all there is to this game.

I think though that this game suffers from being slightly too easy from the perspective of an adult - It is quite easy to get rid of all the pieces in your hand with a few lucky rolls of the die (I will explain this in the Rules section below, but basically the die tells you what action to perform, such as: how many animals to put on the stack; giving pieces to other players; letting the whole group decide what piece you should put; and expanding the base). As such, there isn't too much competition in this game. Your group may have a good laugh though playing it - and that's basically it.

Just to mix up the rules a bit, I could see the merits of playing this game as a cooperative exercise - for example, getting everyone to build the highest and most stable stack possible - that would be much much harder and an interesting challenge.

And I can see that the expanded versions of the game (as listed above) might provide more of a challenge and have a higher fun factor.

However this is still a decent game to play, even if you are not-so-young anymore.

*27 July 2014: Revised down from 6.8+. It's more of a kids game rather than offering any substantial difficulty or challenge to teenagers or adults. - the dexterity required in this game isn't so substantial. The figures are cute and colourful though.

The Crocodile is placed in the middle. This is the starting base from which all play originates from.

Each player receives 7 animals: A toucan, a sheep, a frill-necked lizard (if I'm not mistaken), a porcupine, a monkey, a snake and a penguin.

A player's turn goes like this: they roll the die and perform the action of the dice. And then they pass on the die to the next player who then does the same thing and so on.

First person to get rid of all their pieces wins.

So, for example, if a player rolled a symbol with two dots, this means they must place two animals onto the crocodile like below:


If the crocodile symbol is rolled, it means the player can EXPAND THE BASE by placing a piece NEXT TO the crocodile (hence, other animals, from now on, can be placed on the newly placed piece). For example, a player could simply place a sheep next to the crocodile like so: 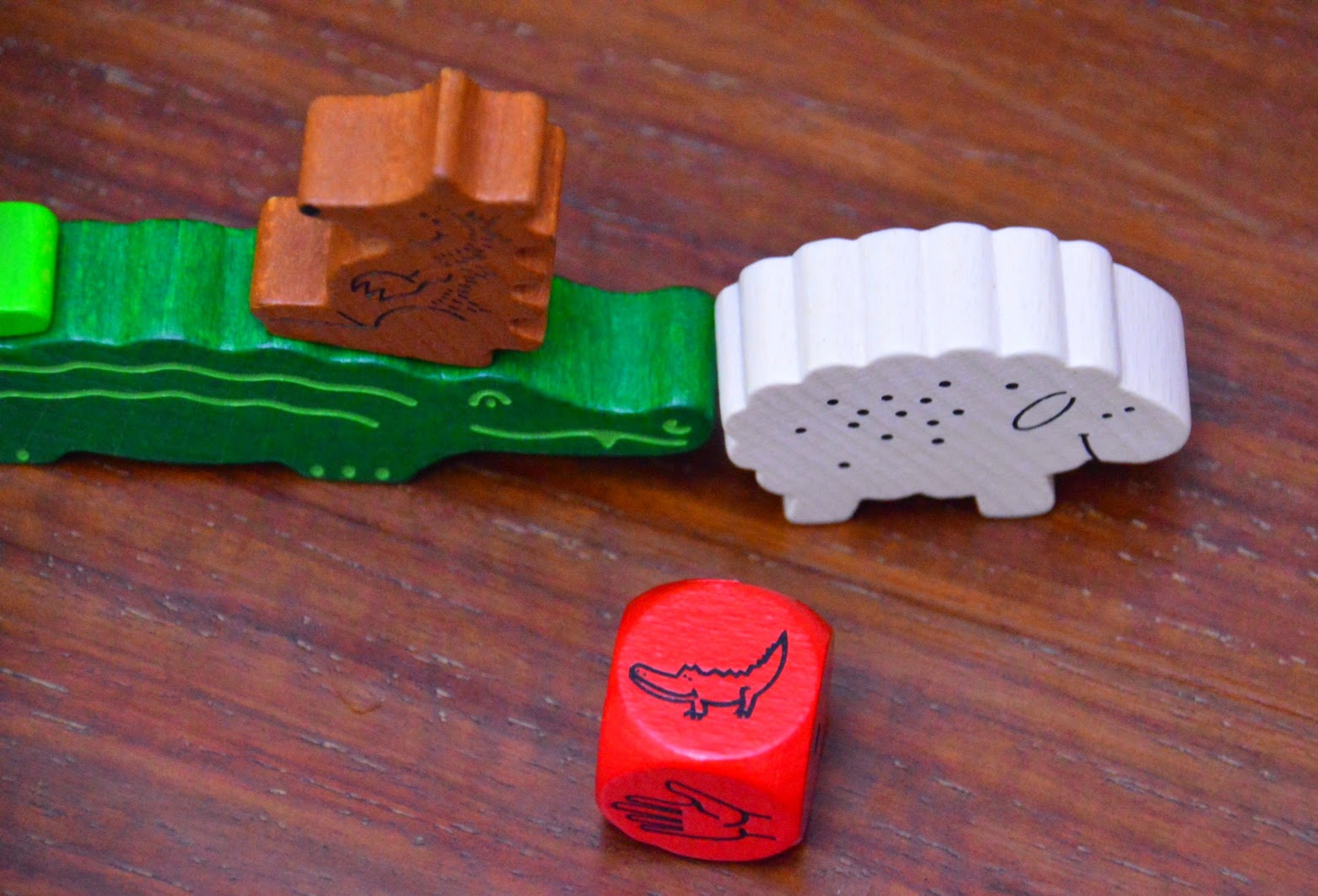 What happens if the pieces fall?

If, in the process of placing a piece, only one piece falls, then the player who caused the stack to fall must take back the piece that fell.

If, two or more pieces fall, then irrespective of the number of pieces that fell (to make sure the game isn't too cruel to someone), the player who caused the stack to fall must only take back two pieces (rather than everything that fell!!!).

If no one caused the stack to fall and it just fell by itself then no one is punished.