Rumour has it that this is the ultimate couple's game

Relatives: Keltis (aka Lost Cities: The Board Game)

Age: 13+  according to the box guidelines, probably because of the counting/scoring involved. (However, take these guidelines with a pinch of salt: Sometimes they can be accurate but at other times they don't always seem to be accurate - for example, I find it hard to believe that Mr. Jack can play ages 9+; if that were the case then Lost Cities might arguably be 7+ on that basis.)

Availability:  Quite widely available online, but is not famous enough to find its way into department stores

This is one of those games that will have a bigger impact on you if you are relatively new to card games. When I first played it I really loved the game but over time the concept became a bit repetitive as luck plays a heavy role in this game.

Players compete for the most points by going on expeditions. There are 5 expeditions. However, there is a bit of business involved - once you "commit" to an expedition, you incur a fixed start-up cost, namely, 20 points.

To score the most points on an expedition, you need to play the same-coloured cards in ascending (but they need not be in consecutive) order.

However, you need to collect the same-coloured cards before you can do that - which depends both on how you draw from the deck and what cards your opponent decides to discard (thus, there is lots of luck involved). You must be confident that the sum of the numerical values of the same coloured cards is sufficient to go beyond your 20-point start up, allowing you to profit for that particular expedition. [see Rules, and last picture, for more clarity]

The issue and main tension of the game is this: if you go on too many expeditions, your points will be diluted and you will probably make an overall loss; however if you go on too few you are taking the risk that you will  not be able to collect the exact cards you need the right time (which may force you to discard them and give them to your opponent!). Investment cards also double, triple and quadruple the risk.

The other pressure point is that you must decide if you should discard certain coloured cards - if you do perhaps your opponents might steal them to start their own successful expedition.

The fun in this game is the unpredictable and vulnerable nature each player finds themselves in - it is often the case that at the beginning of the game players are unsure if they should commit to certain expeditions or whether they should wait it out until they collect better cards. There is also the added conflict of not knowing what cards your opponent wants too.

September 2014: Increased from 6.5. I severely underrated this game; the tension it creates is just nice and subtle enough for it to be enjoyable. In particular, the start of the game is intense as you aren't sure of what you should do next. The colour and art of the cards is quite nice.

The mixture of uncertainty and risk (in a pseudo Solitaire-style format) coupled with the aim of maximising profits makes for an interesting competition for two players.

This is the game board:

Each player gets 8 cards, and there is a draw deck arranged (on the right in this picture below) like so: 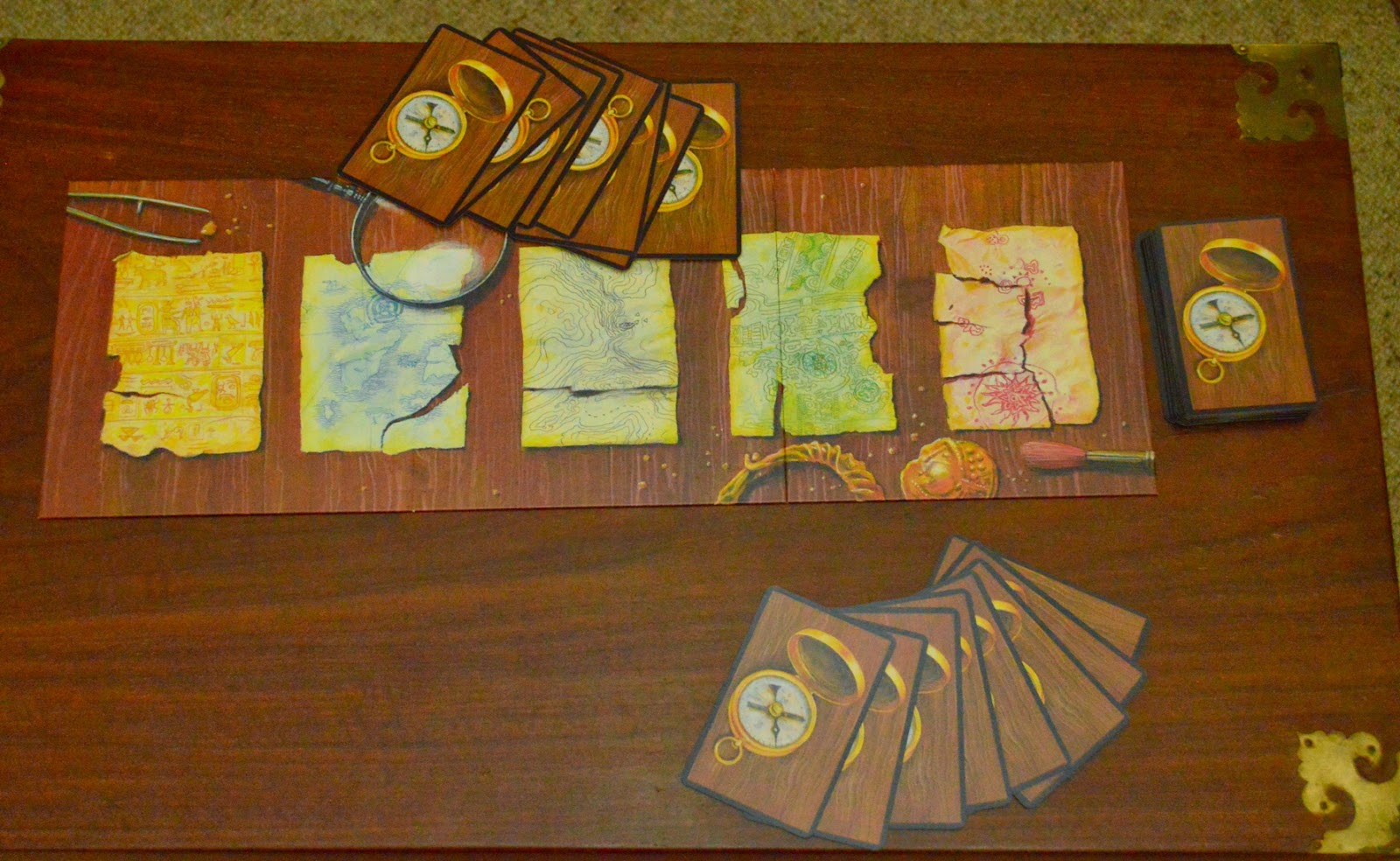 On their turn, players do 2 actions: Play a card and then pick up a card.

When players play a card, they have two options as to how they may play it:
1a. Play 1 card BELOW the board to start or continue an expedition [investment cards must always be played first and they cannot be added later - then numbers must be played in ascending order] or
1b. Play 1 card ON TOP OF the board to DISCARD CARDS (thus making the cards accessible to everyone).

This will become clearer. 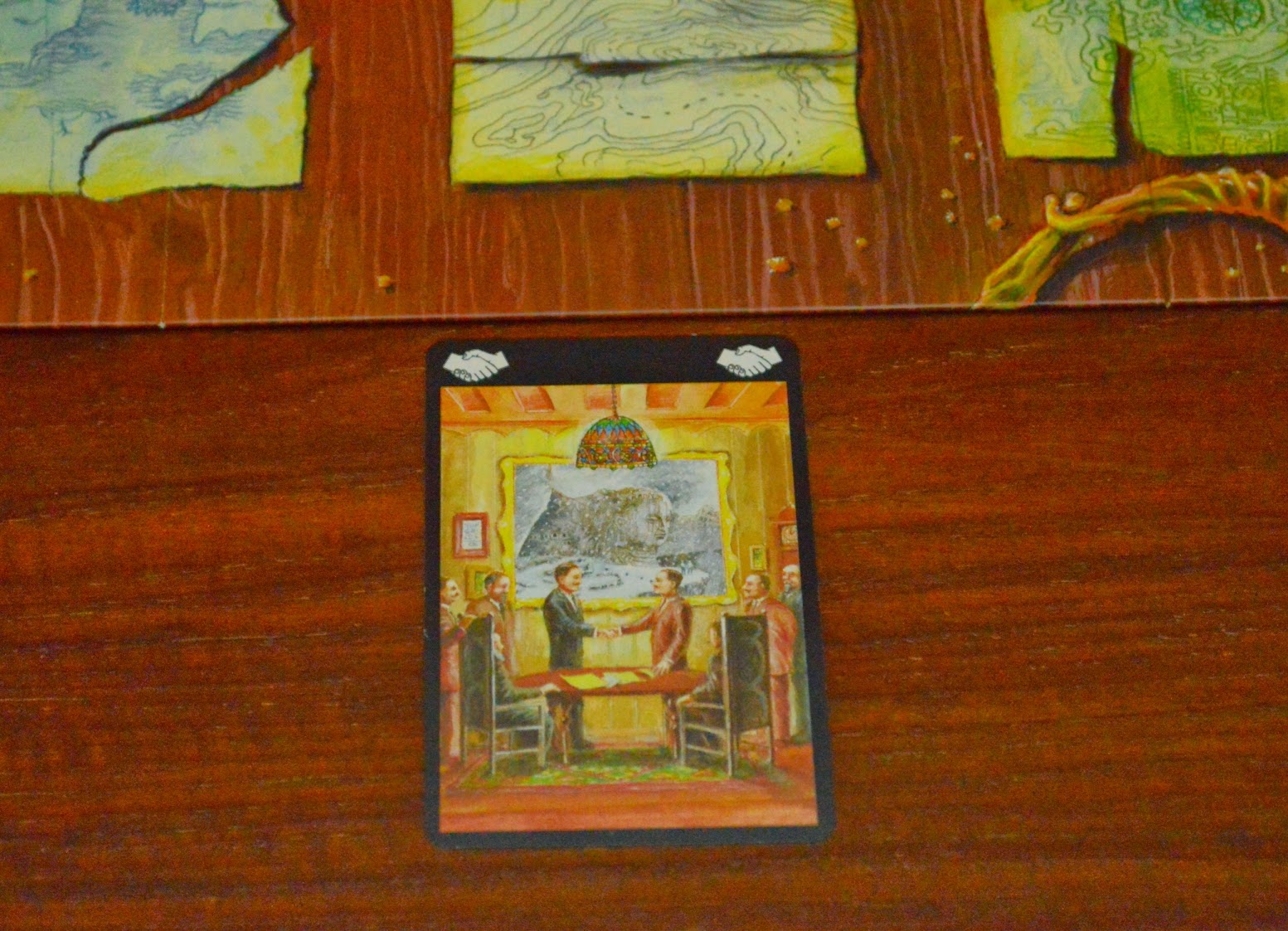 If we skip forward a few turns later, this is what the bottom player's expeditions may look like: 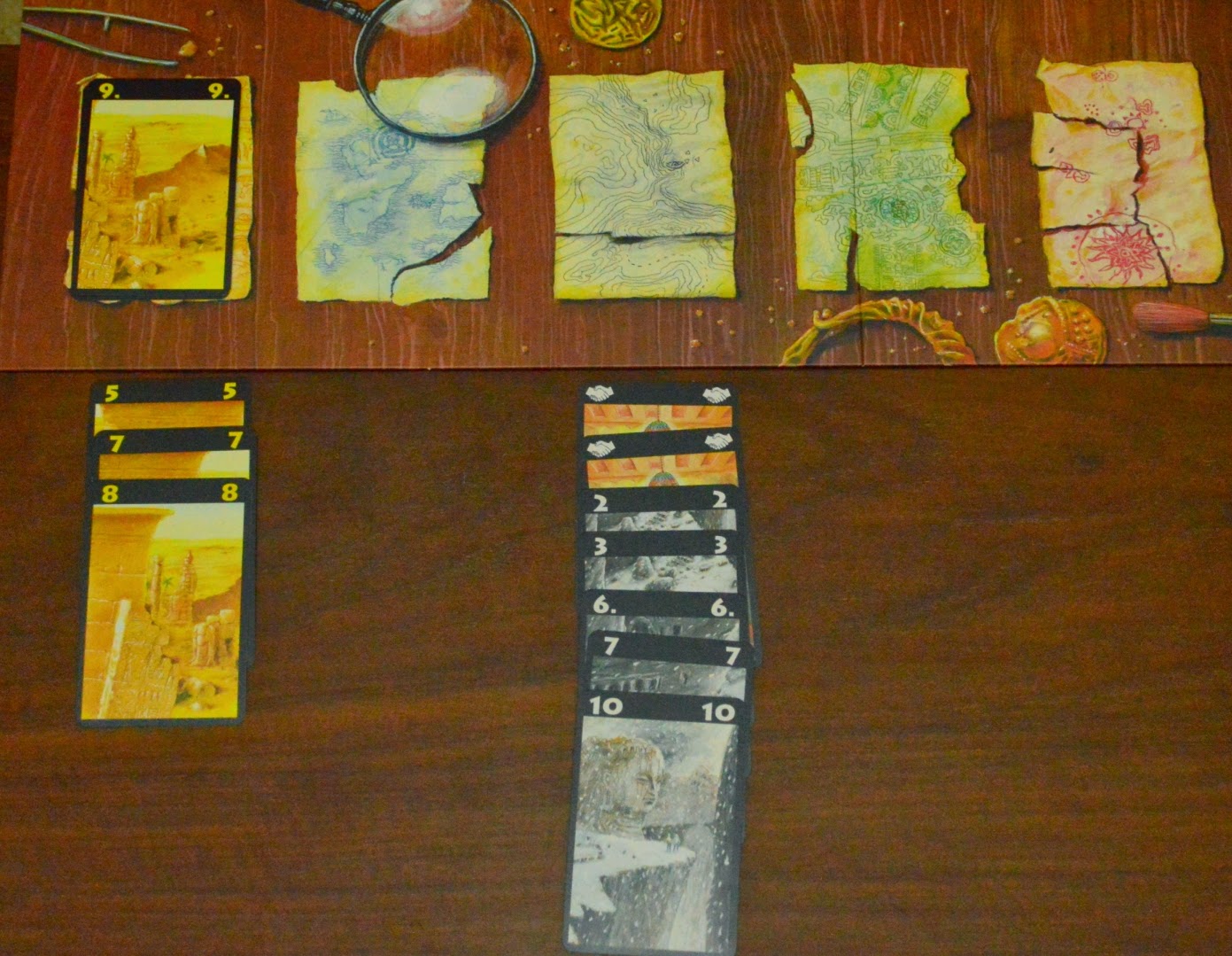 I have only showed the bottom player's side of the board; note that the top player also has their own expeditions going on their side.

Things you should note:

1) Cards played must be in ascending order but they need not be consecutive - hence, just like above, for the White Expedition you can skip  the'4' and '5' cards if you didn't have them to play but it may be more worth it to wait until you get the right white cards.

However, if we pretend that the "10" card was not played for the White Expedition, then this is what would happen:

SO you can see that investment cards are ALWAYS a double-edged sword - they amplify your losses and rewards. (They do not amplify the fixed point bonus though - the fixed bonus is added on after the multiplying occurs.)

4) Picking up discarded cards: The bottom player may at any time, after playing their card, pick up the 9 from the Yellow discard pile (and hence, they may pick up the top-most card from any discard pile - so long as there are cards there). If there are more cards under the Yellow 9, they may pick them up as well on subsequent turns (so long as their opponent does not pick it up before them!). Only the top-most card should be seen in the discard pile.

The game ends when the draw pile runs out. Hence, sometimes players may procrastinate by continually drawing from discard piles.

Add up all the scores for each expedition for each player - highest score wins.