Robot madness - a game for the visually, creatively and, mathematically, gifted.

This review is dedicated to my friend Hari Raja, who, since high school, has never ceased to impress me with his sheer intelligence. Such intelligence includes, but is not limited to: 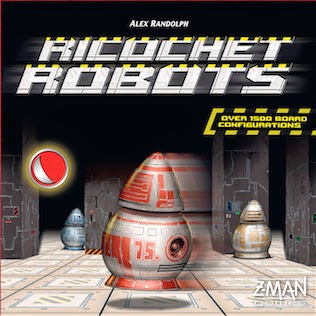 Versions: This is the 2013 edition which includes the additional 5th Silver Robot (the original version only contains the yellow, blue, green and red robots). It can be viewed as a luxury or "Deluxe" edition.

It also includes 8 double-sided board pieces (incorporating old and new boards released over the years, I suppose), 4 of which are needed to make a complete board. Thus, the number of board variations that can be created is fairly large.

The other versions work fine but may not have the silver robot or have as many game boards.

Warning: A disappointing feature of this game is that some of the boards do not align well in the 'middle corners' when you punch them out of their cardboard.

Players: 1 to Infinity (literally - as many people as you can surround the table with. However, this game could accommodate an infinite amount of people if an online version of it was created)

Time to play: 30 mins+ (Possibly longer if this is your first time)

Availability:  Can be found online and some hobby game shops. It isn't that widespread.

7.5* out of 10. (Great, arguably one of the best games the Abstract/Puzzle genre has to offer - See my Rating Scale)

If you don't like puzzle or abstract games, run away now.

This game is all about manoeuvring robots to reach a particular goal. Robots do not have brakes and travel in a straight line - they only stop when they hit an object (a wall or another robot).

Players must "bid" the number of moves they think they need to reach the goal. The person who makes the lowest bid AND successfully demonstrates the solution wins a point.

With the right (and willing) group, the suspense and tension as everyone desperately tries to find a solution to the given puzzle makes for a competitive and fun game. What I also like about this game is that it can play as many people as you want (within reason of course - your friends have to be able to fit in the room and be able to properly see the game obviously).

However, this game isn't for everyone - especially those who don't like computing solutions in their head. Put another way, I find it very hard to see the average person enjoying this game. In that sense, I believe this game discriminates against the majority of people because it would seem to only attract a certain breed of people: those who enjoy maths competitions and engaging in challenges that test the outer limits of their brainpower.

[As a sidenote, when our group played this game with Hari he virtually won almost every single round. Hari was consistent with finding solutions to the puzzles regardless of how complex or simple they were; however, for the rest of us mere mortals, we could only demonstrate flashes of momentary brilliance and were thus only able to win every now and then.]

* July, August and September 2014: Revised down from 8.7+. I admire whoever designed this game because of its elegance and clean rules, and the mental challenge it provides to a group of gamers. However, it's not a game I would play every single time nor is it a game that everyone would look forward to. I still consider it to be arguably one of the best abstract games you can play given a certain group of people, but that group of people may be hard to come by. I think it's "accessible" to everyone in the sense that almost everyone can appreciate the beauty of this game (especially playing with experts) - but whether they can actually feel competitive is a completely different thing. But it's certainly not accessible to everyone in the ordinary meaning of the phrase due to its difficulty and the inherent abstract nature of the game.

The thrill of working out the solution to a puzzle before your competitors do makes this game quite enjoyable.

Join 4 pieces of the game board together (ensuring there is 1 of every colour in the centre out of green, red, yellow and blue).

You can place the timer in an easily accessible location. I prefer to place it in the middle of the board.

Place the robots in ANY POSITION THAT DOES NOT HAVE A SYMBOL (literally anywhere on the board that doesn't have a coloured symbol). 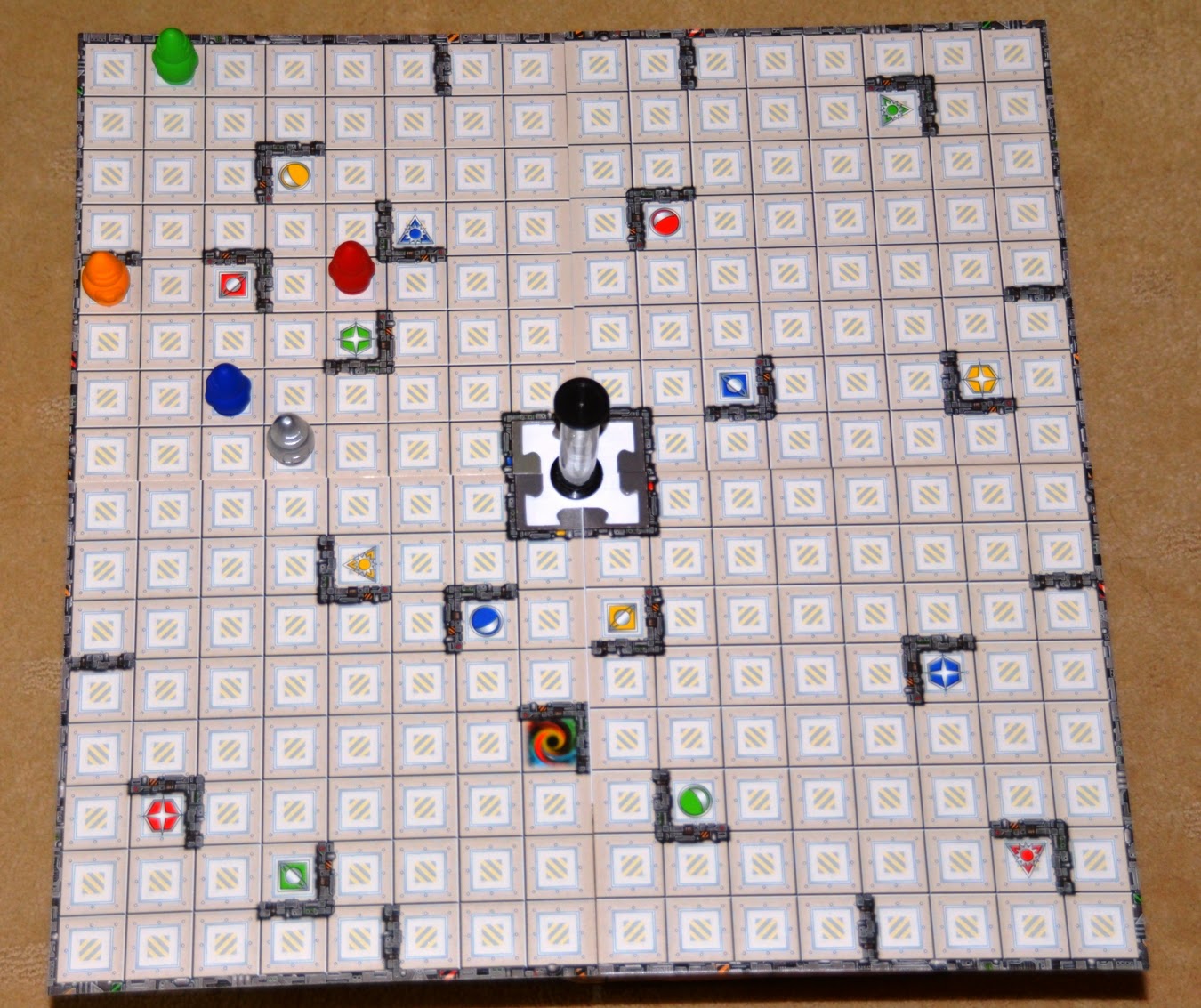 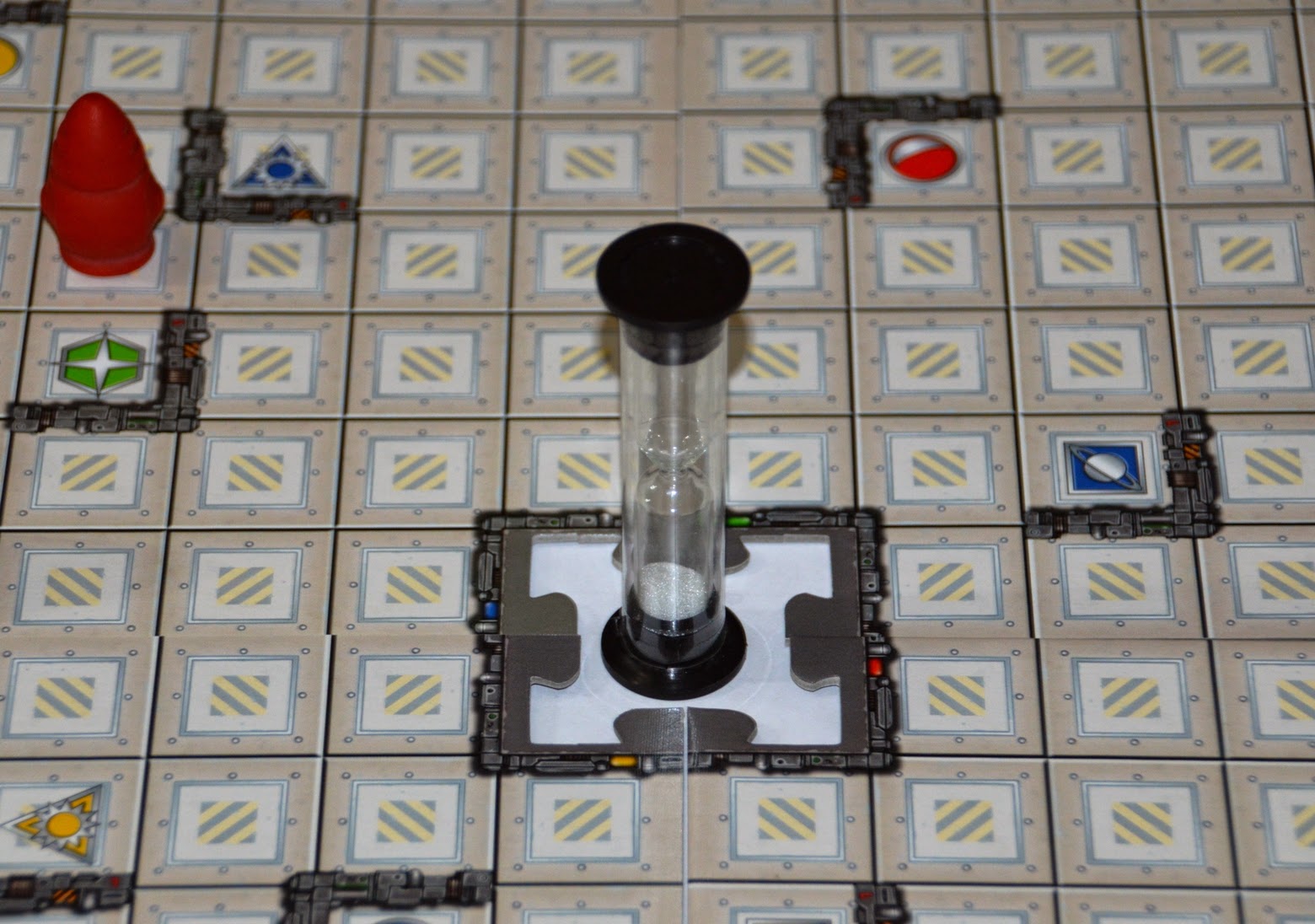 Now, after placing the robots, make sure you place the corresponding coloured starting square under its respective robot (see below).

To make things easy to explain, I have placed the robots like so:


Next, shuffle all the tokens face down and someone randomly turns one over: 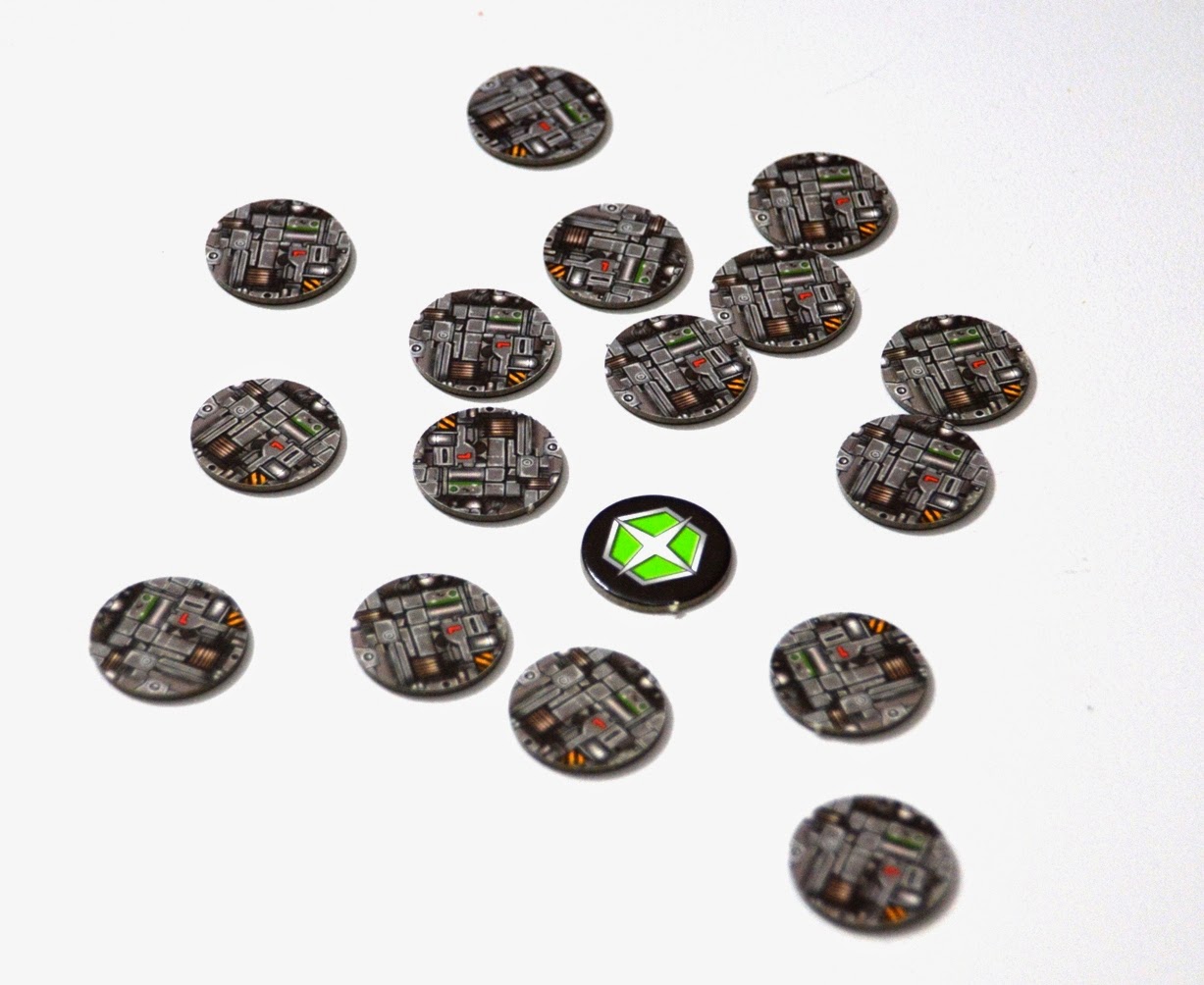 Now, whichever token that has been turned over is NOW THE GOAL.

The COLOUR of the symbol dictates which coloured robot must go onto the goal.

Here, because the symbol is green, it means the Green Robot must go to the Green Shield/Hexagon/Star symbol.

EVERYONE must now think of how many moves they will require to get the Green robot to that goal location.

A move is defined as:

- A continuous movement made by any given robot in a straight line , until it hits an object (such as a wall or another robot)

- When counting moves, all moves of robots must be counted - hence all robots can be moved and they can be moved in any order, so long as they move in a continuous straight line (not diagonally) from their starting point to an obstacle. See below for clarification.

In the above example, Hari calls "SIX". The timer is turned over. Everyone now has 1 minute to make a bid.

Hari cannot bid above Six during this time, but can choose to go to five if he wants to. He chooses not to because he can't find a solution lower than six moves.

1) Andre
2) Hari
3) David (because Hari called Six first - hence there is a small advantage to being the First bidder; but it doesn't prevent someone like Andre from calling a lower bid than the First Bid)
4) Jack

Because his bid is the lowest, Andre goes first. However, after demonstrating his solution, he fails to get the green robot to the target destination in 5 moves (he miscalculated).

NOTE/CHALLENGE: The optimum solution IS IN FACT FIVE MOVES, however - can you see it below? (Credit: Hari Raja)

The robots are then placed back onto their starting positions.

Because his bid is the next lowest, Hari then demonstrates his moves like so:


Now, the starting positions/squares are now SHIFTED to reflect the NEW positions the robots have taken like so: 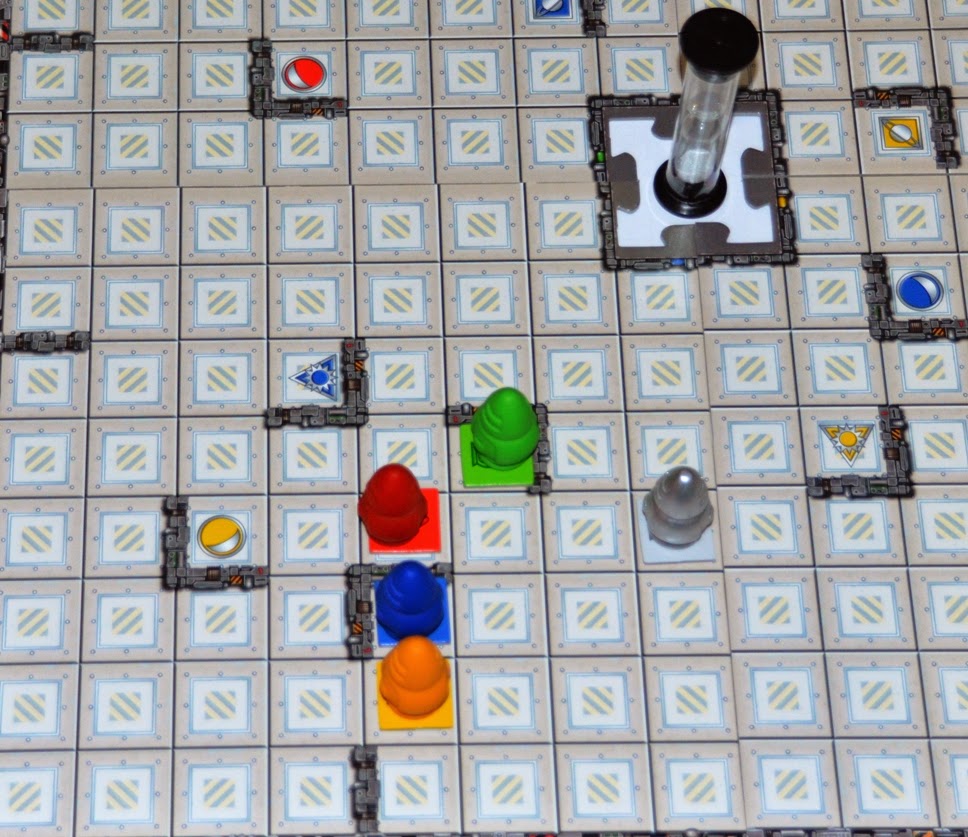 This ensures that, for the next round, if someone fails to demonstrate their solution in the number of moves stated in their bid, we can remember the starting positions of the robots.

Then, a new token is flipped, and the same process repeats itself (Bidding and demonstrating the answer by moving the robots) until all the tokens are gone.

Winning: Whoever scores the most points (tokens) wins