"A team is only as strong as its weakest member."

A game for the genuine all-rounder, the Jack of all trades...

Publisher: Fantasy Flight but Kosmos also does it. My version was published by Esdevium Games.

The version I am reviewing is the one that comes in the standard square box, which is quite large. It comes with a large board as well as plastic tiles and trays for each player to store their tiles on. Some may now refer to this as a "deluxe" version, but the reality is that this ought be considered the normal version - it is only said to be "deluxe" now that the Mass Market Edition has been released (see below).

The Ingenious Mass Market Edition comes with smaller/flimsier cardboard, rather than plastic, components and board; thus it is significantly cheaper by about $15 to $20. Hence, if you are not particularly fussed about quality then this is definitely a good option.

As a sidenote, it seems to me that there is perhaps a trend these days for companies to shrink the size of board game boxes to help consumers/purchasers conserve shelf space. Whilst this is a good enough reason for taking that step, don't let that reason alone fool you. These companies aren't completely altruistic: selling smaller board games substantially reduces shipping/transport/logistical costs for them and would therefore, presumably, increase their profit margins as well.

There is also an Ingenious: Travel Edition, which apparently only plays two players, but apart from that I am unsure how this compares with the Mass Market Edition.

"Simply Ingenious" is another small-scale version (and hence substantially cheaper by about $15 to $20). I don't know what the components are like though so I would guess, but am not sure, that it is similar to the Mass Market Edition discussed above.

Alternate Name: Ingenious is also known as Mensa Connections in the UK, which is a product that seems to be endorsed by Mensa, the high-IQ society, in its store.

There is also Ingenious Challenges, which appears to be a separate spin-off of sorts to the original game. It contains 3 challenges: a card, a tile and a dice challenge. Thus it doesn't seem like you need the original game to play it. Read here for more details.

Availability: Widespread in online stores, but it may be quite difficult to tell the difference between the mass market edition and the "big-box" edition.

This game focuses on a unique concept that revolves around balance and equality.

Players attempt to score points in each of their 6 colours/symbols. Players are NOT rewarded for maximising points for one or two colours only: instead, there is an incentive to ensure that all colours are scored as equally as possible. Hence, scoring highly in one colour/symbol, but doing poorly in the others will probably mean that you will lose. No one (colour) gets left behind!

Overall, I feel that this is an interesting abstract strategy game that works well in the family environment. There is of course a moderate degree of luck as one has to draw tiles, but the rules do try to ensure there is fairness by allowing you to redraw all your tiles if you don't have tiles of your lowest scoring colour. Hence, I wouldn't classify this as a pure abstract game - it suffices to say that it plays like an abstract game that caters well for the family.

That is all I have to say in this summary - to better understand this game, check out the rules (in particular, the "Winning" Section).

* 28 July 2014: Reduced from 7.35. I have made the range of 7.2 to 7.25 a benchmark of sorts - it's a score that represents a game that has some different mechanic/feature about it that makes the game special. Ingenious, in the context of an accessible family game, probably fits that bill given its concept of "no one gets left behind!"

The aims of leaving no one (colour) behind and striving for balance makes for an interesting and easily accessible game for the family.

Everyone receives a score board with 6 pegs (1 for each colour/symbol).
And everyone also receives a tile rack with 6 tiles on it.

What happens is, on your turn, you:

1) Place a tile on the board and then
2) Draw a tile to refresh your hand back up to 6 tiles.

Usually a tile is placed such that as many of the SAME symbols are touching each other in a straight line.

You receive a point for every matching symbol that is "connected in a straight line" to the symbols you just placed down. A straight line is defined as any of the imaginary 6 lines that emanate from each side of a given hexagon. For the purposes of scoring, you do not count symbols on the tile just placed down. 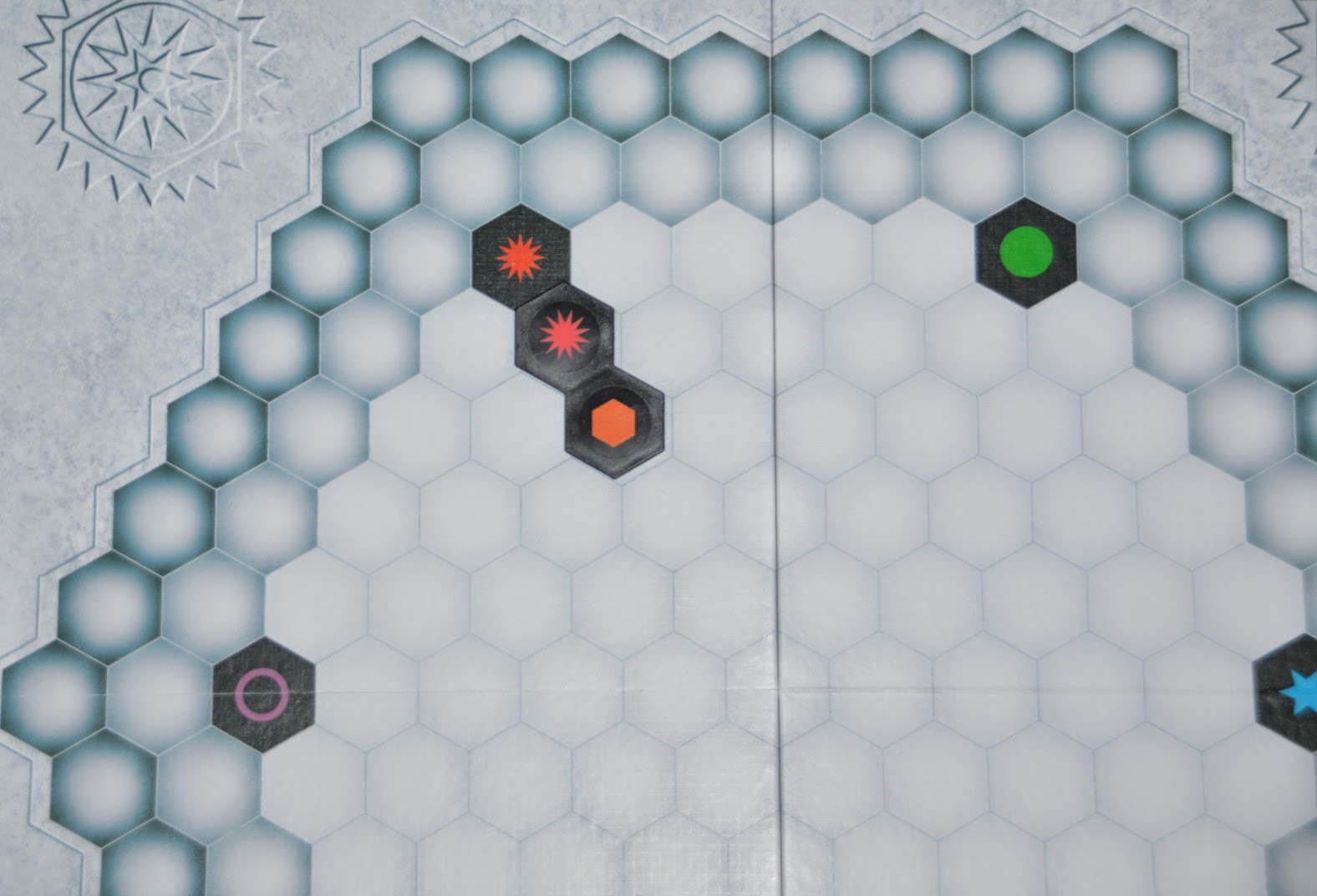 Hence I score myself 1 red point on my score track: 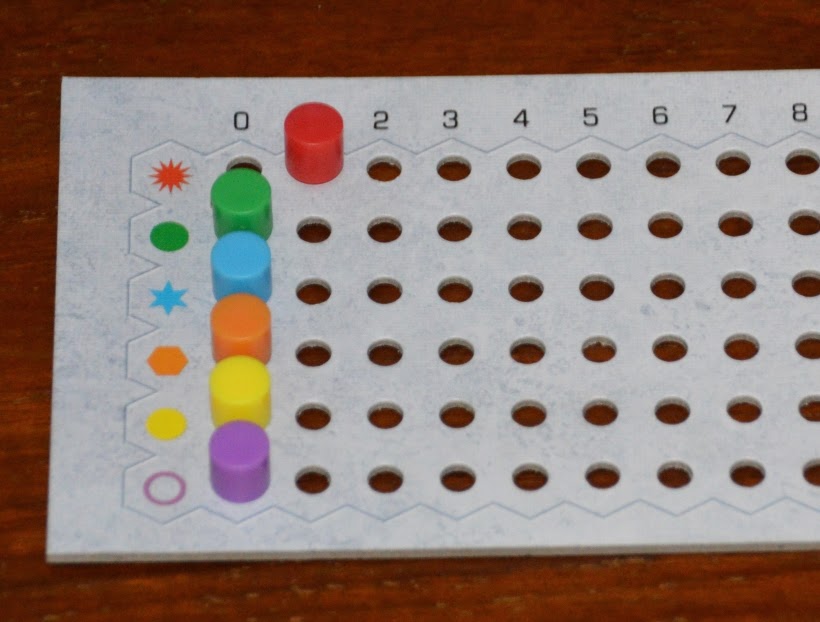 If this is the situation: 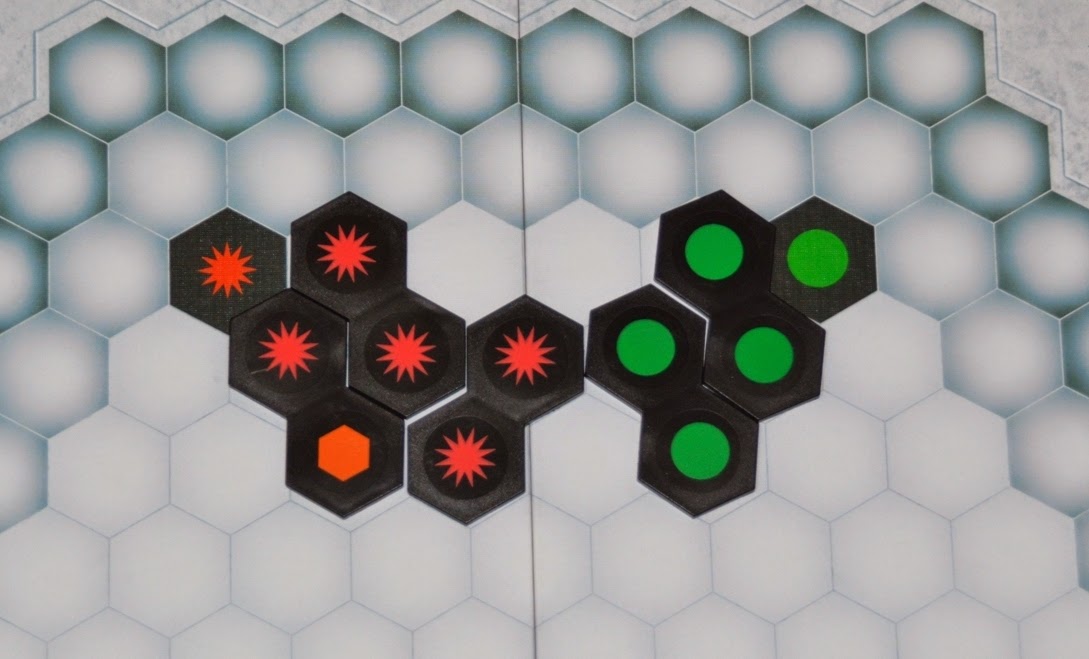 Suppose that Player B placed this piece (1 red and 1 green) in the gap above.

To clarify how I got 4 points for Red:

2 points from the 2 red stars to the left of the tile placed by B (they are connected in a straight line to the tile originally placed);

The other 1 point being the red star connected to the straight line south-east of the red star of the tile just placed by B. This imaginary straight line hits a blank space (situated between a red star and a green circle) which obviously does not score any points.

Add these points together to get 4 points.

This is how B would score their progress: 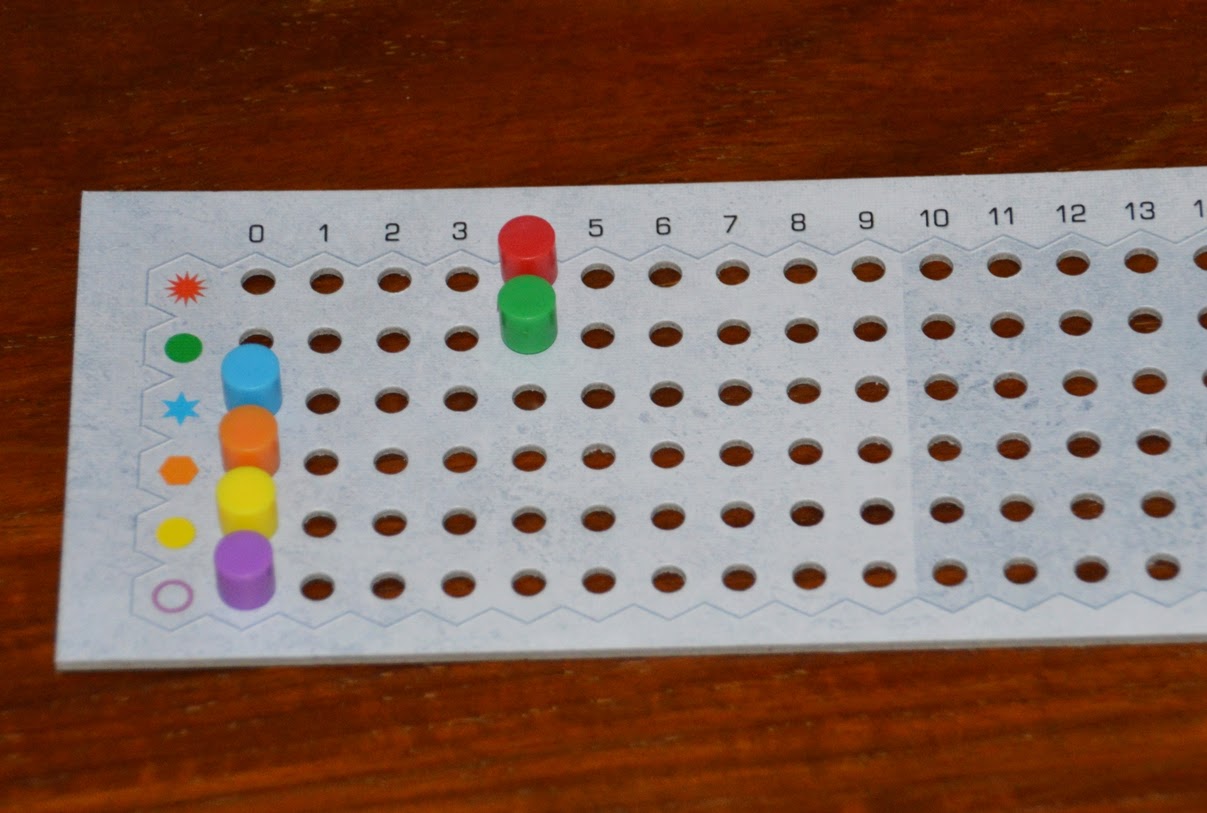 The game ends when there are no places available on the board for a tile to be placed.

The winner is the person who has the highest score in their weakest colour. Therefore there is an incentive to score all colours as equally as possible.

For example, suppose this was B's score at the end of the game:


B's weakest colour is Orange as it is the lowest-scoring colour.

In a sense, B could have spent less time on increasing points in Red and Purple to increase Orange instead - this is because, for the purposes of winning, it doesn't really matter how extreme B's first and second placed colours are (what matters is that all your colours are equally scored highly).

Thus, if Player C had every single colour on 9 points they would still beat B's score (because their lowest scoring colour is all colours - which is 9 points). Hence, this demonstrates that carefully working every colour equally is more meaningful than pursuing extreme values of other colours (as Player B did with Purple and Red)

Free turn: If you score 18 in a particular colour, you get to take another free turn (that is, before refreshing your hand, you can play another tile for free)

Automatic win: If you score 18 in all colours, you automatically win.

Also included in the game is a solo and team variant of the rules.
Posted by Andre Lim at 15:49