Outbreaks and infections; the spreading of diseases on a large scale; a frantic fight against time: Pandemic is a modern classic that accurately depicts a very real fear in our world today.

Assemble your team of specialists and get ready to take on the world...

Players: 2 to 4/5, and perhaps even solo?! The expansion "On the Brink" comes with an extra "actions" card for a 5th player but I don't see what is stopping you from playing with 5 in the vanilla version - albeit it will be a lot harder to get everyone to cooperate.

Age: 8+ but players probably need to be a bit older than that to fully appreciate everything

Time to play: About 45 minutes, but could be longer; equally though it could also be shorter if you play 2-player and you both know what you are doing.

Price Range (AUD): About $48 to something crazy like $80. I've even seen a website selling the original game, first edition, for $120 which is just absurd.

Availability: Quite popular but not well-known enough for it to make its way into department stores at shopping centres. Definitely found in hobby game stores and online though.

What is great about this game is that it is relatively challenging without being overly complicated. Furthermore, players must put all notions of competition behind them given the element of cooperation (as in Hanabi) - this gives a somewhat different feel to the nature of this game, though of course, this cooperative element is nothing too special these days since the advent of Reiner Knizia's Lord of the Rings or other games like Scotland Yard or Arkham Horror but Pandemic is indeed well-regarded for "championing" or popularising the cooperative genre in modern times. Add to that the tension players feel as the whole team seeks to cure the world of dangerous diseases in a manic race against time, and you have a modern classic.

One of the reasons why the game is so tense (and fun) is because the odds are stacked in favour of the game in the sense that there are 3 ways to lose and only 1 way to win. If there are too many outbreaks; if one disease type spreads too much; or if players run out of "time" (not literal time but cards, so running out of resources might be a better way to put it) they lose. All players must aim to cure ALL diseases.

Additionally, Pandemic's components are fairly good (See Rules & Components below); its theme is also interesting and the game mechanics make the game quite replayable. I would put this game in a similar category to Ticket to Ride in the sense that it is widely accessible, fun and appeals to the masses.

The downside of this game is that it is very easy for passive, shy or non-outspoken people to not participate in the game as their vocal peers "do all the work for them" or make all their decisions on their behalf. The game does encourage player discussion and cooperation, in that many actions require planning ahead and some even require you to ask permission from a player before a certain action can be done. However, if you have friends who are by nature conservative, or don't really like to contribute to discussion, they might not feel like they belong in this game. This is especially true where one person knows all the rules and has played the games many times before - as such there is, in those cases, a perceived (and probably real) power imbalance.

Overall, a great game - initially given a similar to Ticket to Ride because it is a solid game in principle, but upon reflection it doesn't necessarily gel with all game groups because of its cooperative element so I have decided to significantly reduce its score.

*January 2015: Reduced from 7.9. For me, Pandemic is a great 2 player game but only a "sort of" great 4 player game. I can't pinpoint it exactly but I think it has a lot to do with the mechanics and the cooperative aspect of the game. I find that the more people you play with, the less fun it is because the more 'polite' people don't really contribute to the discussion (unless you play with aggressive or outspoken people)

What makes this game fun?
Try this cooperative game if you are after some challenging problem-solving and risk-taking within a tense group environment; it's significantly harder than lighter cooperative games like Hanabi.

You will note that the board is separated into regions. This is deliberate as each region (and its cities) has a certain coloured disease - Red for East Asia; Black for West Asia and the Middle East; Blue for Europe and North America; Yellow for Africa and South + Central America.

I won't go into too much detail as to how you should set up the game - the game makes this pretty clear already. I will just give you an overview of what to expect.

You will have to create X piles of cards, where X is the number of epidemic cards used for the game:
Give everyone a role card - choose randomly or pick what you want:
Remember, the basic aim of the game is to cure all diseases.

1. Perform 4 actions from a selection of 8 actions; repetition is allowed
2. Then draw 2 cards (hand limit of 7, limit applies immediately)
3. Cities are infected
4. Next player's turn

These steps are explored below.

The 4 actions are summarised by the player cards provided below:

The "top card" above displays ways players can move. For example, if you have the "Tokyo" card in your hand you can discard it to take a direct flight there by moving your pawn there. Alternatively, if you are in Atlanta, and have the Atlanta card, you can discard it to fly anywhere you like (charter flight). You can also conduct shuttle flights in between research stations.

An important action is the treat disease option which allows you to remove diseases from the board. You can also take/give cards that match the city you are in.

This infection rate increases when epidemic cards come out - epidemics are also nasty because it causes diseases to recur in cities that have already been infected (as discarded infection cards get put back onto the top of the infection pile).

Outbreaks: If a city obtains a 4th cube, this 4th cube is not placed in that city itself; instead 1 cube of that colour is placed in EVERY ADJOINING CITY!!

For example, if this was the situation in South East Asia: 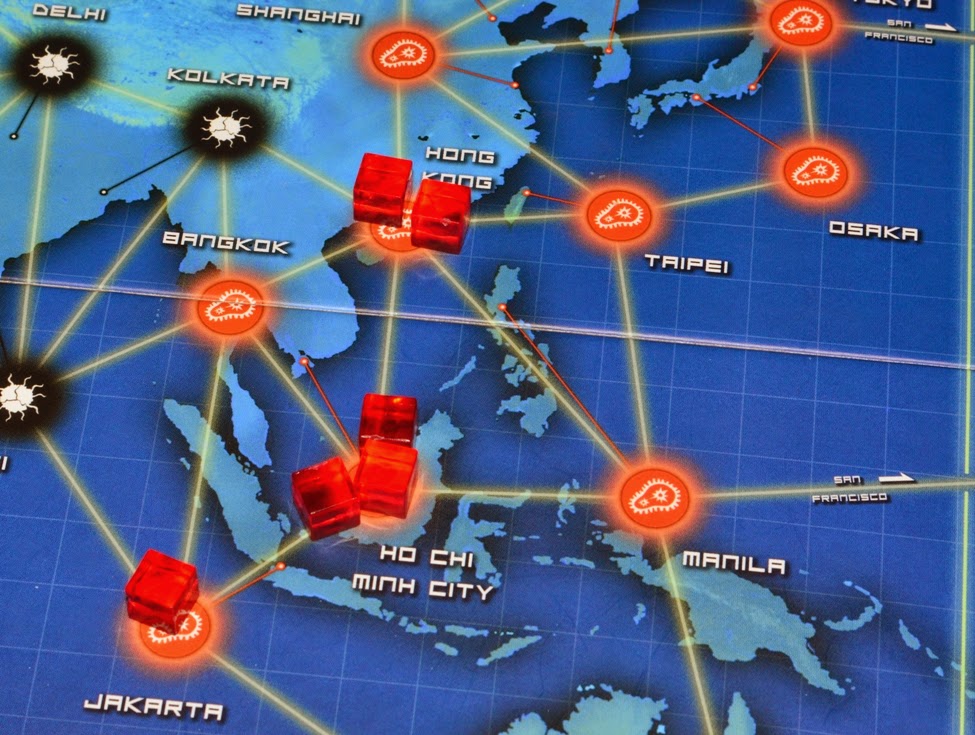 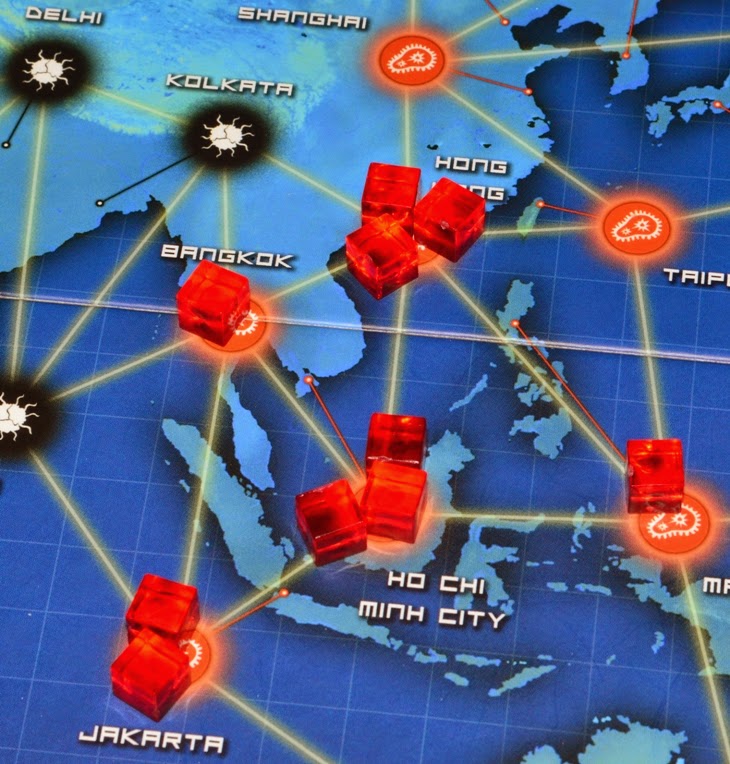 If HK were to be drawn next from the infection pile, then two outbreaks would occur as HCMC would also get another outbreak because HCMC is adjacent to HK (though the rules state that HK would not get an outbreak twice, as that would cause an infinite chain reaction where both cities would keep getting outbreaks and the team would lose immediately).

Outbreak track: The outbreak track is located next to South America and it shows you how you are doing - reach 8 outbreaks and you lose. 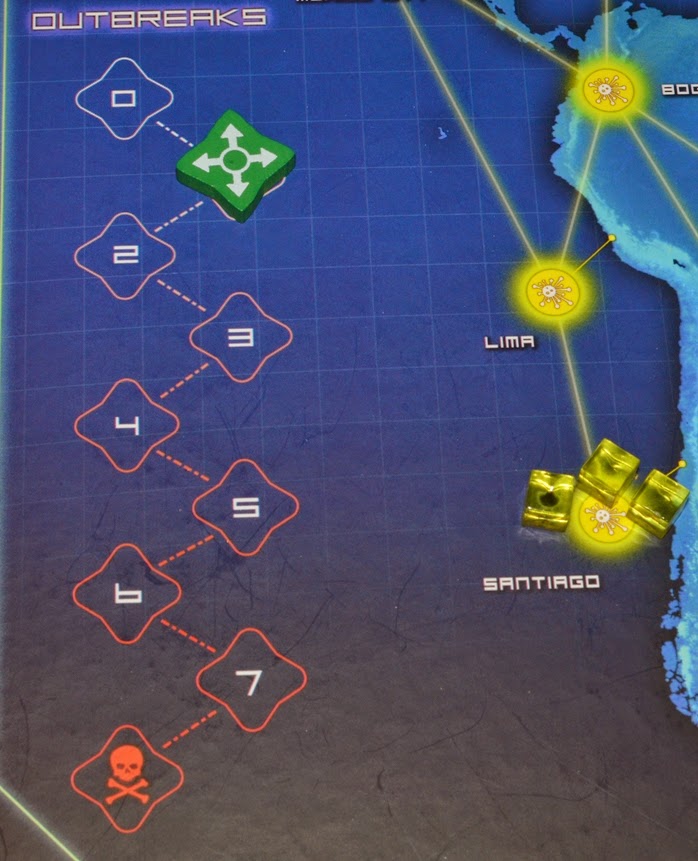 Here, the outbreak marker has been pushed to 1 as Ho Chi Minh City just experienced an outbreak.

Starting and another Example

Everyone starts in Atlanta, the home of the CDCP (Center for Disease Control and Prevention).

For example, if it was Green's turn, she could use up her 4 actions by:

Of course, there are many other variants as to what you can do.

The aim of the game is cure all diseases. This is done by collecting 5 cards of the same colour for each coloured disease. One of your actions allows you to take away a card from one of your team members - but it's not that straightforward as the "taker" and "giver" of the cards must both be in the city that is the subject of the card being taken AND the giver must give permission for the taker to take that card.

Once you have 5 cards of the same colour you must "cash in" those cards by going to any research station. This will give your team the reward of obtaining a cure for one coloured disease. Cure all 4 diseases to win the game.

You keep track of this with the cure markers present at the bottom of the board as below: 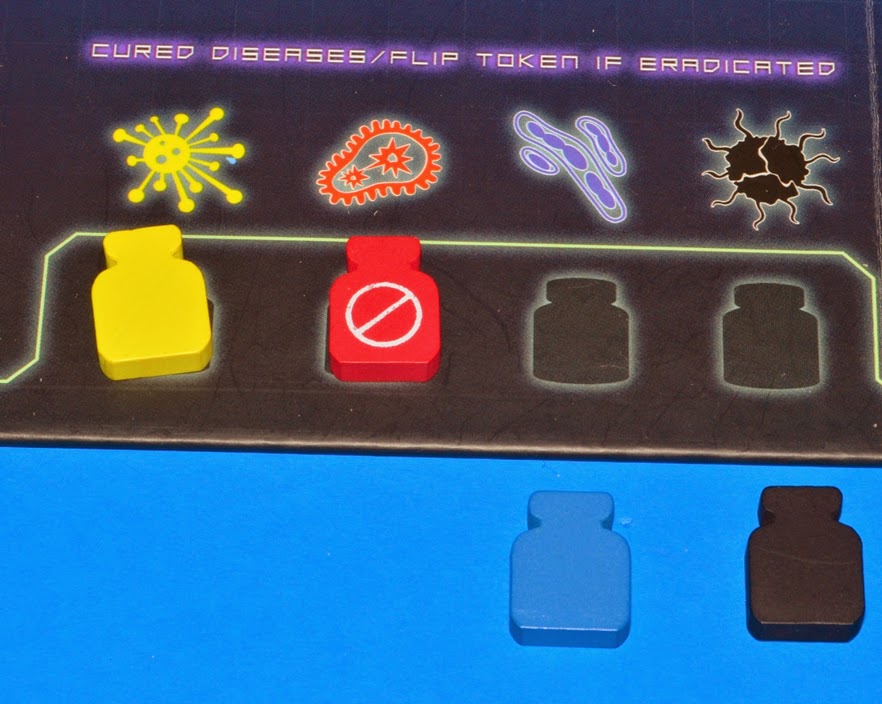 In the above example, the Yellow and Red diseases (in which both have markers on the board) have been cured but Blue and Black have not. Note some other special things: