A relatively unknown gem that has players claiming ownership of criminals in gaol...before they break out of prison! 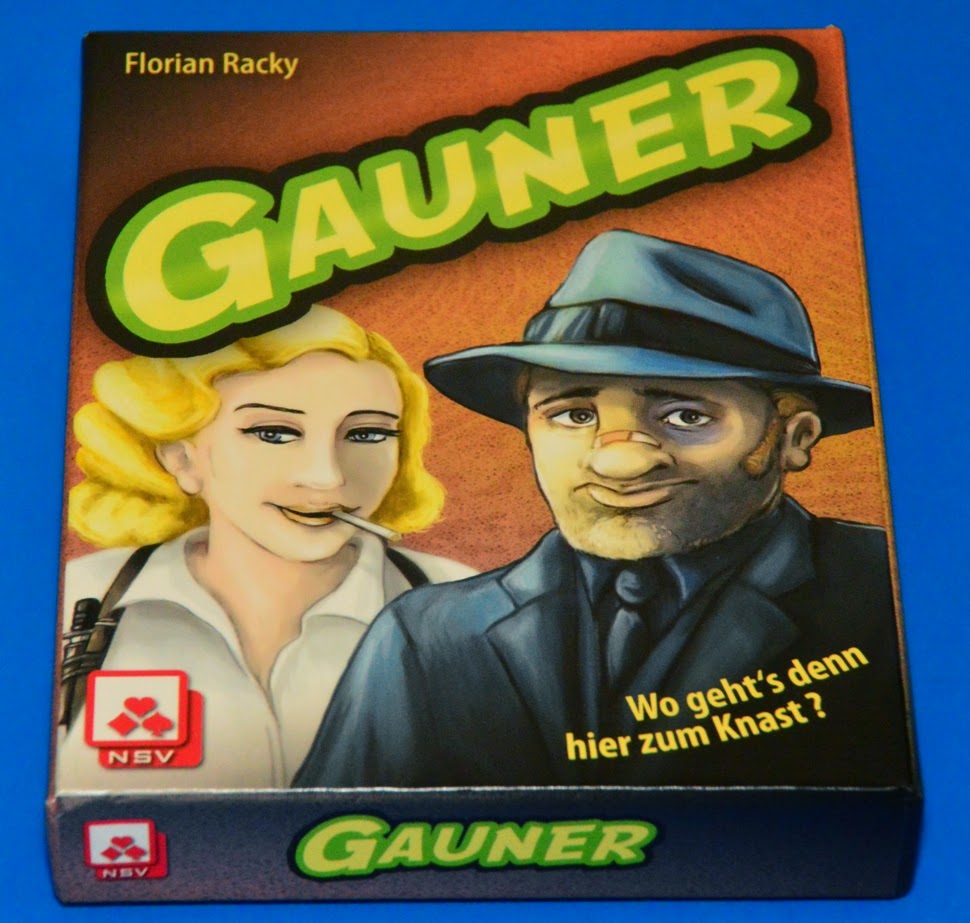 Many thanks to Sean for giving this game to me as a present.

Judging by its name and cover art, Pets is a somewhat bizzare Chinese version of Gauner apparently with the same rules but with a theme that is less attractive than that offered by Gauner: animals. It plays up to 5 players and its rules are similar (except, according to BoardGameGeek, players choose one of three options - which includes a new option of playing a card into the rows - rather than doing all three options as in Gauner) 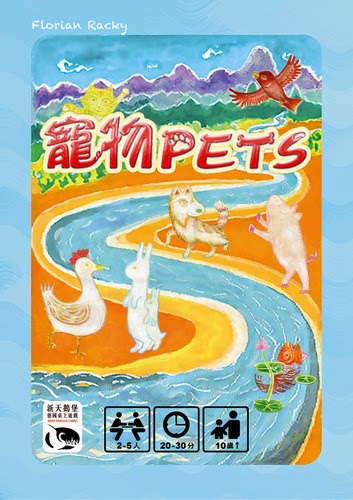 Players: 2 to 4, but 5 using special rules in Pets

Availability: Rare - hard to find even amongst hobby game stores and online. Even ordering directly from NSV seems to not be possible as, from my understanding, they don't ship outside of Germany.

Trivia/Random: I Google translated the NSV description of Gauner and this is what ensued:


More and more tough guys and little girl walk in the slammer. How well do just that to the members of their own gang reliance and the next outbreak is only a matter of time.Each player collects hardworking helpers. When the time is right, they are played. And if the bars are then blown up, is only once cashed properly. The simple procedure and the clever crooks rating make a real treat for all card game lovers. cards Size: 59 x 91 mm

To better appreciate why this game is fun you'll probably need to see the rules below. In a nutshell, players try accumulate criminal cards in their hands (these are used to claim ownership of criminals) and send criminals to gaol (which is done to gather points).

The main tension and fun to this game is the fact that there is a very delicate balance between collecting certain types of criminals in your hand and sending those types of criminals to gaol; do too much of the latter, and you won't have any cards to claim the criminals in gaol (but there will be lots of points up for grabs). However, do too much of the former and there will be hardly any points in gaol but you will have definite ownership of that type of criminal. Added to that dilemma is the fact that your claims can also be ousted by new claims made by other players. You are also constantly watching out for the actions of your opponents, and trying to make sure your actions do not benefit them.

The game is interesting because some criminals are more 'valuable' than others in that they are rarer and there are less of them present, such as the grey or green crooks where there are only 6 and 9 of them respectively in the whole deck.

The upside of collecting rarer crooks is that a player is readily able to secure a free multiplier by collecting and playing fewer cards than one normally would need to collect (as against collecting the more common crooks). However, since these crooks are rare in quantity they will net you less points in gaol. Conversely, the blonde and orange crooks are plentiful in supply (with 24 and 21 in the deck respectively), thus giving you more opportunities to score in gaol; but the downside is that everyone will be contesting their ownership due to their large quantity. Then there are the crooks that give you another sort of dilemma as they are neither here nor there - they are not too rare but not too common either.

I think this game plays extremely well given, firstly, its size and, secondly, its aim to be a quick card game. It has an interesting mechanic of claiming ownership of criminals and there is plenty of tension involved to keep everyone on their toes as you must make your claims before the gaol fills up completely. Its artwork is also fantastic and has a smooth classic feel to it. The only negative of this game I would say is that it goes by incredibly quickly and the scoring rounds occur rather too soon as gaol does fill up faster than you think it will, particularly with more players. It's quite a satisfying game and somewhat replayable as it has a unique feel to it - but given that it is a minor card game, it can only do so much for you. Nonetheless it's a great game.

Quick, take ownership of the crooks before they escape prison! The theme of the game itself sounds quite interesting.

Set up involves randomly distributing cards into 3 rows of 10:

Before you can play you need to be familiar with a few gameplay concepts:

Groups: A group is defined as 1 or more (up to 10) cards of the same type that are horizontally adjacent to each other. For example, in the picture above, the 4 Yellow cards in the top left are one group; and so are the two Orange cards next to those 4 Yellow cards; and so is the lone Purple card on the middle far left.

Quantities/Rarity: The number on the bottom of each card tells you the number of that coloured-crook that exists in the entire deck. So for example, there are 24 "Blondies" and 15 Purple Crooks in the whole deck.

On your turn you perform three actions one after the other:

1. Accumulate criminals in your hand: Pick a group on the extreme left end or the extreme right end of any row to take into your hand. Thus, there are usually 6 options to choose from (3 rows x 2 ends). This action does not directly give you points but it does give you the opportunity to bid for ownership of crooks in gaol later on.


2. Send the group of criminals immediately adjacent to the group just taken by you to gaol: this is fundamental as criminals in gaol are worth points (thus, be careful not to give your opponents too many points). However, the catch is this: if they are not claimed, you cannot score points off them

3. (Optionally) play criminals accumulated from your hand to claim the right to score from that type of criminal.

Note that, on future turns, your claim can be ousted. To oust a claim, the claim must be beaten by at least 1 card.

3b. (Compulsory - but must happen after, not before, Step 3) Draw a new card in the spot where all the action above has occurred 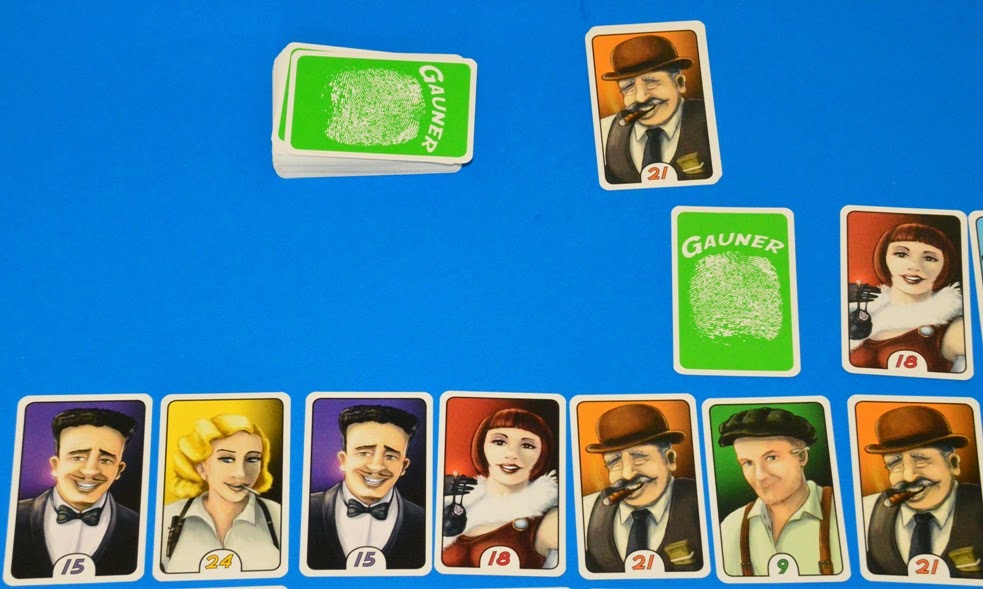 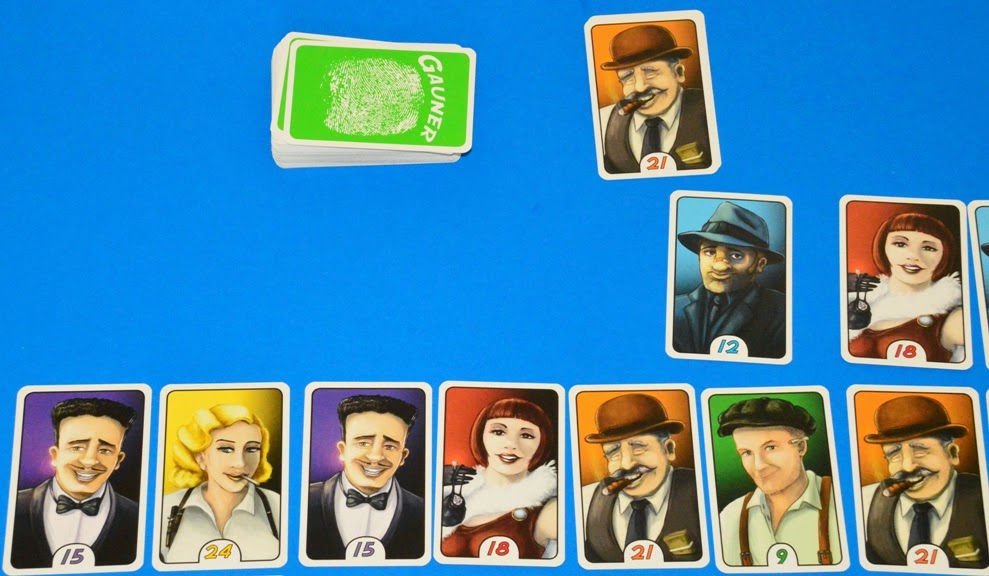 For example, suppose these are the different types of criminals that were claimed at the time of a scoring round in a two-player game: 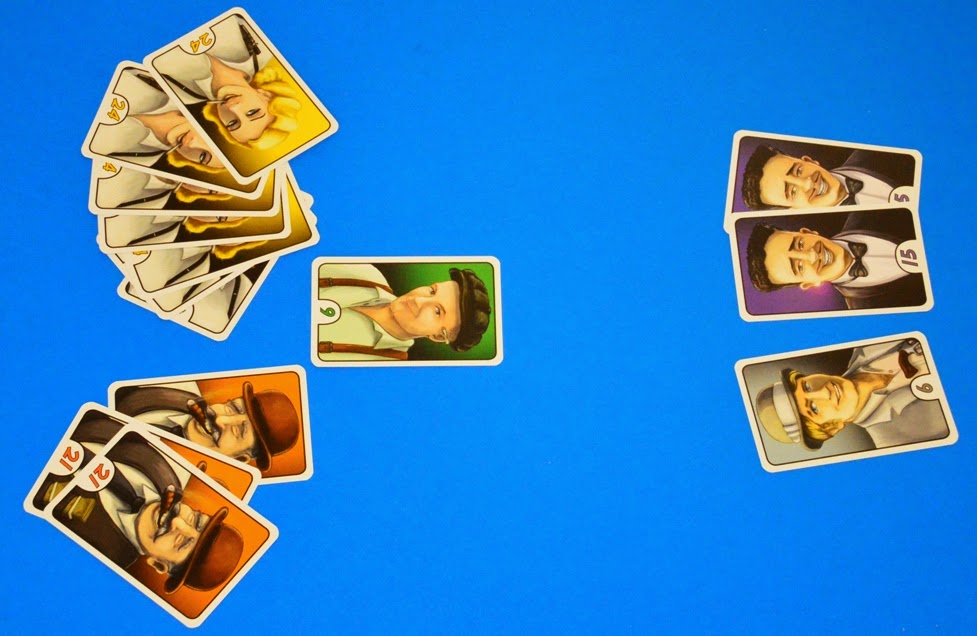 Left has claimed three different types of criminals (Yellow, Green and Orange). Thus Left's multiplier is x3. The quantity of the cards used to claim the criminal does not affect the quantity of scoring directly; it merely dictates who claims ownership of that criminal type (by observing whoever has the most of that colour).

So Left was more than welcome to use 1 Green card to claim the Green crook and 7 Blondie cards to claim the Blondie crook (for no one else could beat these claims, no matter how big or small they were).

Suppose this is the state of the gaol (6 types of criminals having at least 2 cards each):

Whoever has the most points at the end of the third scoring round wins.
Posted by Andre Lim at 22:52