A somewhat suitable substitute for when you tire of playing The Resistance: Avalon (if such a thing were possible), although with too many horror themes for my liking. 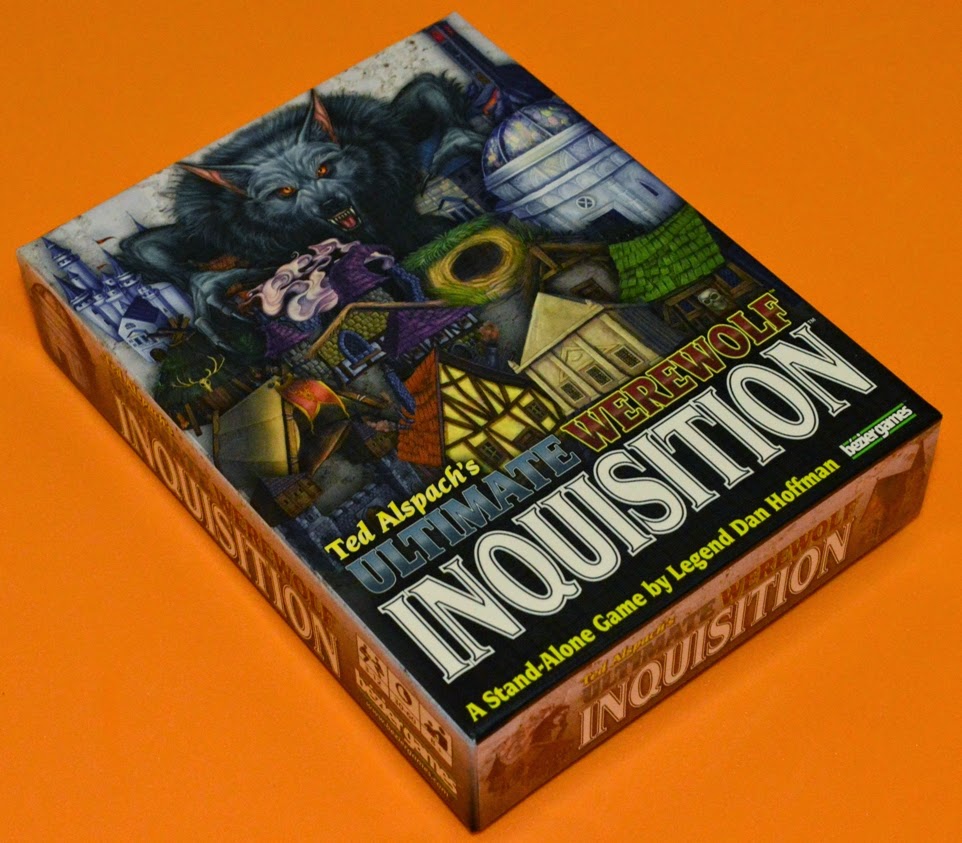 Age: 7+ according to the box but I strongly disagree. The game has too much of a horror theme and the mechanics are too clunky for a kid to fully understand.

Availability: Available online, and perhaps in some hobby game stores.

The general premise of this game is that your group is sitting on a panel of Inquisitors who must try to uncover who amongst a group of 12 village residents are werewolves. However the problem is that, even amongst our panel of Inquisitors, there are hidden werewolves amongst us! This is quite a good theme for a game and I do like this. Inquisitors get to use different powers to help their respective team achieve their cause.

The primary mechanic of this game is voting as the group as a whole decides by majority which person in the village dies. You won't have much information at the start but certain cards help you to figure out where the werewolves are (such as the Seer, which lets you look at the identity of one of the residents). As the village itself consists of a group of 12 cards turned face down in front of the Inquisitors, this obviates the need for player elimination which is the norm for all other Werewolf titles - meaning that none of the Inquisitors die (a good thing, in my opinion).

Another aspect of this game that I quite like is that, if you are bad, keeping your identity secret isn't the most important thing: what does matter though is that you protect the werewolves. Hence, it isn't the end of the world if you choose to reveal yourself because you can always use that to your advantage. In fact, one of my friends Shaun is very good at this approach. As a revealed werewolf, you can cause others to think that an innocent person is bad by pretending to be friends with them or talking to them; you might also be able to double-bluff by telling the truth about what a card is after using the Seer or Apprentice Seer (and because people think you are bad, they think the card is bad and hence vote to kill it).

What I don't like about this game is that the mechanics are a bit clunky (in terms of taking a power and then voting) and people who are used to playing The Resistance: Avalon might not be used to playing a game like this. Sometimes, depending on how the powers are selected and the situation, it does feel like you are helpless and can't do much to help your team - but that feeling I suspect is deliberate and true to the Werewolf genre of games. The game also favours the werewolves if games involving more players, as the werewolves have more opportunities to sacrifice their identity to critically stop the villagers from winning. A lot of the powers are sometimes not useful but, at times, a lot of teamwork is required to coordinate the use of powers to stop the Werewolves from winning (for example, by using the Mayor and giving the leadership to the right person). Furthermore, the night-time phase might be a bit strange for some as it involves players "pretending" to shuffle cards and passing them around after pausing for a few moments (an artificial phase of the game designed to give the werewoles a free kill but NOT designed for people to figure out who the werwolf is - see below rules for a better understanding of what I mean).

Thus, whilst Ultimate Werewolf: Inquisition is a good mafia game, it isn't as clean or elegant as a game like The Resistance: Avalon but it does have its quirks that make it a genuine and viable alternative. I also find the horror theme a bit distasteful, and the images depicted may affect the weak-minded and I don't think it's a game that should capture the imagination of kids (contrary to the recommended age).

What makes this game fun?
Trying to convince others that "this card is definitely a werewolf"  is one of the highlights of this game - sometimes people believe you; and sometimes, for good reason too, others don't. This aspect of the game - deceitful and psychological bluffing - can be quite fun.

The aim of the game depends on who you are:

The first step is to give everyone their identity cards. These must never be revealed to anyone (unless you use the Mason power - which is only introduced in more advanced play)

The game will tell you the distribution of werewolves and villagers depending on the size of your group as shown below:


For example, in a 7 player game there are 4 Villagers (Good guys) and 3 Werewolves (Bad guys): 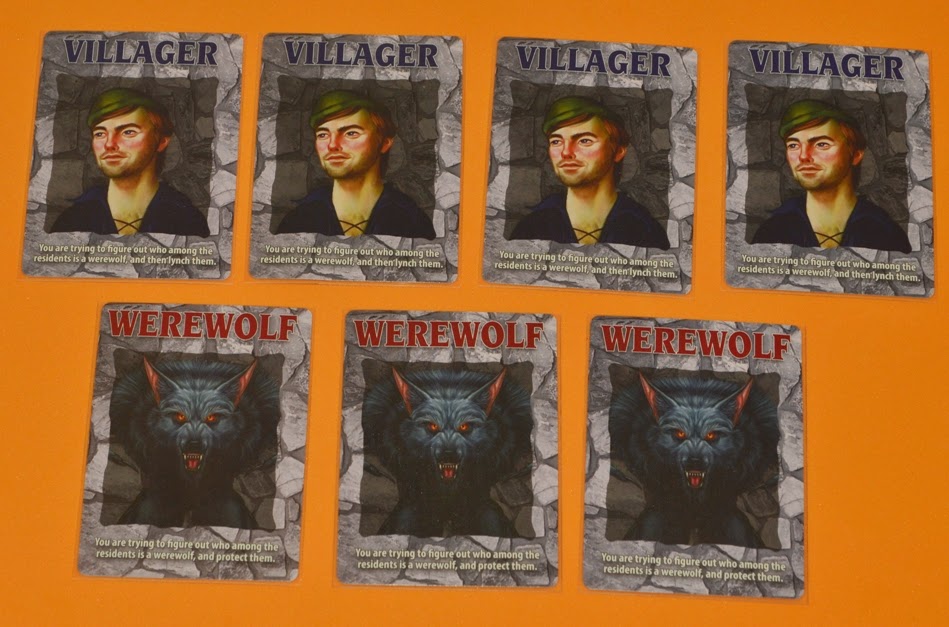 Someone is given the Grand Inquisitor [GI] token, which is a red-figure. This designates who gets to go first and is quite important to either team. The GI token will be passed on to the next player in a clockwise (or anti-clockwise order - why don't you decide as a group!) after each Day Phase, whatever your group decides.

In addition, everyone will receive 2 black voting cubes.

The game asks that you set up the game like so (this is the default setup - but you can change this as there are other characters you can play with): 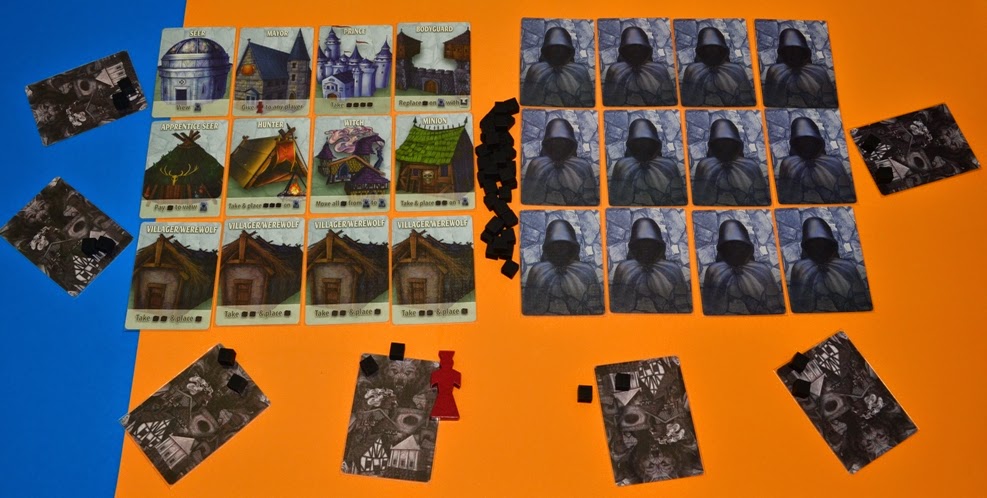 On the right are 12 Character cards arranged in the same formation whose identity is secret. They constitute the Village in which there are 4 Werewolves (in the default game).

In the middle are voting cubes. Surrounding all of this are the 7 Identity or Inquisitor cards placed face down. Notice that everyone has taken 2 voting cubes as well.

Explanation of Village and 'Power' Cards

In the above picture, each Character card on the right corresponds to a Hut (or what I call a "Power") card on the left. If a Character in the village dies, its associated Hut card will 'die' too.

Hut cards are cards let you perform a special power during daytime.

I won't show you all the cards but here are some examples:

If you take a look at the left side in the above picture, you'll see the Bodyguard Hut in the top row and beneath it, its associated Bodyguard character. The powers of the characters here are briefly outlined: 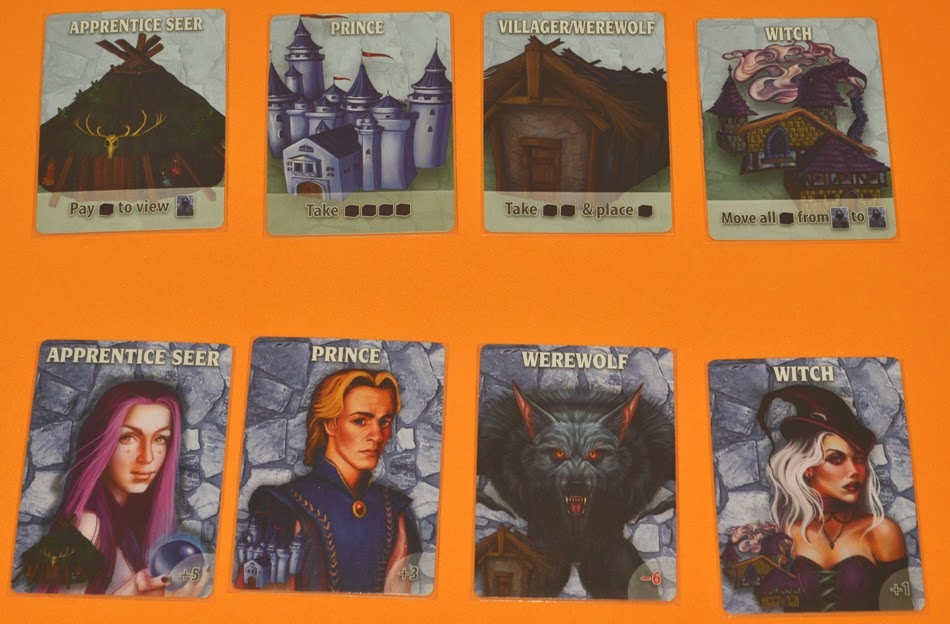 First Night - werewolves figure out who is on their team

From now on, the game will follow two distinct phases: Day Time and Night Time

These are my custom rules here.

Starting with the Grand Inquisitor, everyone performs ONE of these two actions:

[The original game rules say that everyone should always take a Hut/Power card (until there are none left) and then decide whether to use its power OR take 2 votes. I don't like this rule because it makes the game too 'easy' in the sense that players do not need to forego taking 2 votes in order to stop someone else from using the power (ie. you can still stop someone else from using the card AND get your two votes)]

Then when everyone has selected their action, starting with the (possibly new) GI, everyone MUST, unless they have no votes, place one vote on a card they want to "lynch" or kill if they have votes.

Votes stay on forever unless they are selected by the GI during the night time phase or are the subject of another power.

This phase is designed for the werewolves to kill a victim.

Now, the GI selects one column of cards that contains at least two cards. The votes on these cards are placed back in the supply.

Everyone now closes their eyes. The cards are passed around from one person to another with their eyes closed, with each person taking counting to 3 or 4 before passing it to the next player. Everyone should take roughly the same time and everyone should make shuffling noises.

If you are a werewolf you are allowed to open your eyes and change the order of the cards during night time. The character to be killed will be placed on the bottom of the deck.

When the cards come full circle back to the GI, everyone can open their eyes. The first (and second card, if applicable) is safe and not revealed. The bottom card is killed.

Three turns have just elapsed, starting with the GI (who has the red token)

1) It is the GI's turn. In what is a very common turn, the GI picks the Seer and looks at the top left card in the village. It is turned over horizontally which means it can never be looked at by the Seer or Apprentice Seer again, until the columns are reset by the GI for the night phase.

The GI claims it is a Werewolf and should be killed.

2) The player to the left of the Seer takes the Apprentice Seer, who pays 1 cube to look at the top right card. She claims that it is a "Good" card.

3) The next player (on the far left) uses the Prince to take 4 votes.

4) The next player believes what the Seer says and uses the Hunter card to place 3 cubes on the card the Seer said was a Werewolf. 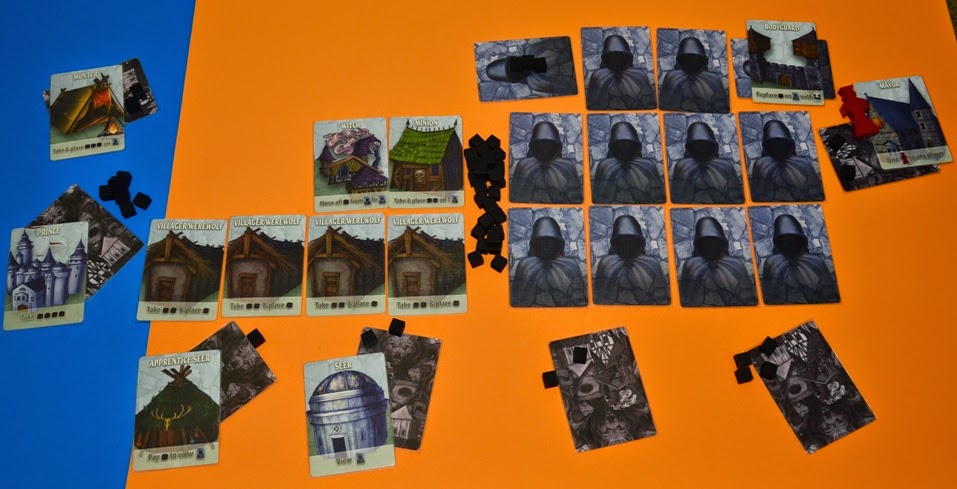 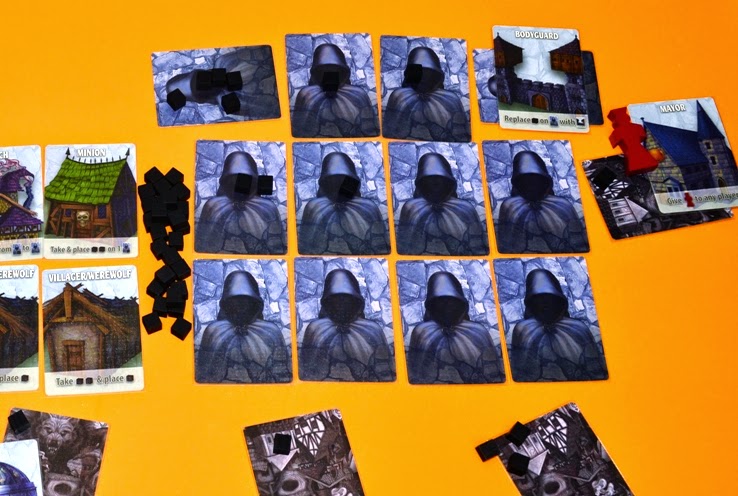 Everyone places a vote on a card of their choice. It looks like the top left card has the most votes so it is revealed: 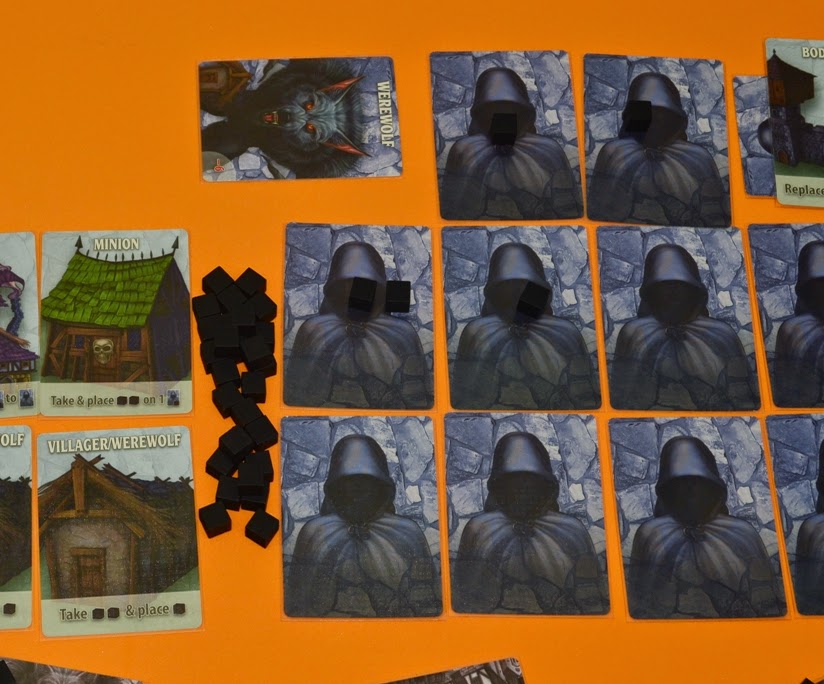 It's a werewolf! Was the player who used the Seer actually a werewolf who was merely telling the truth to gain the trust of everyone (in order to set up a backstab move later on in the game)? Unlikely, but possible.

The Werewolf Character card and Hut card are now removed from the game. 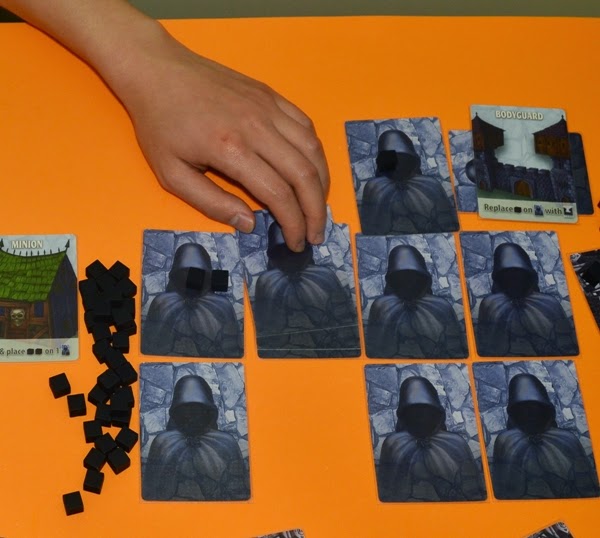 The new GI (the player to the right on the above pictures) chooses the 2nd column. The GI picks them up and asks everyone to close their eyes.

These cards are passed around and they make a full circle. The GI has the cards back now and asks everyone to open their eyes. 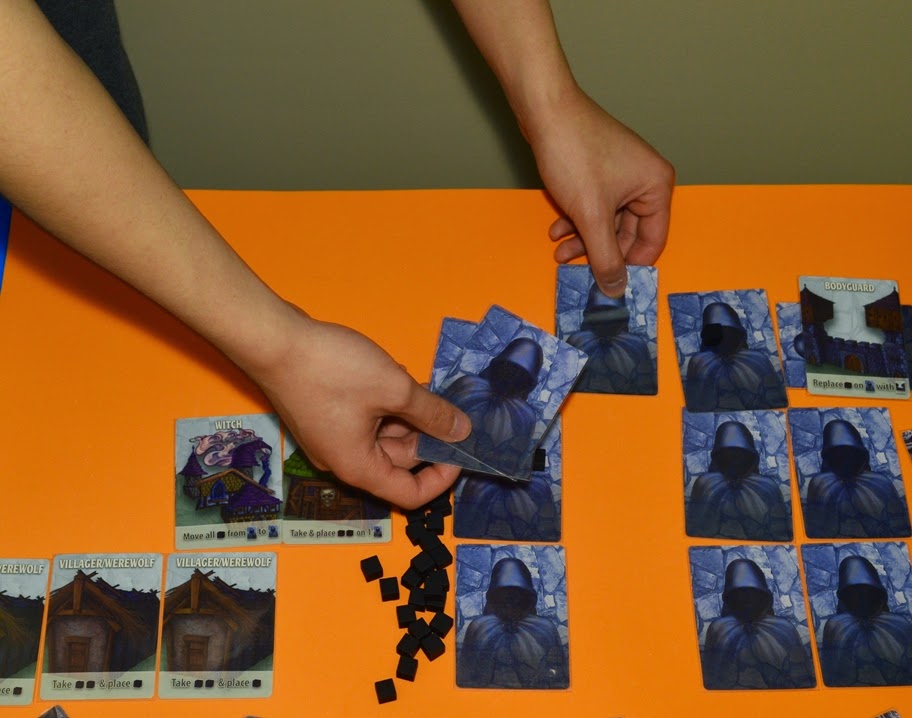 The GI places the top card down - this is safe. 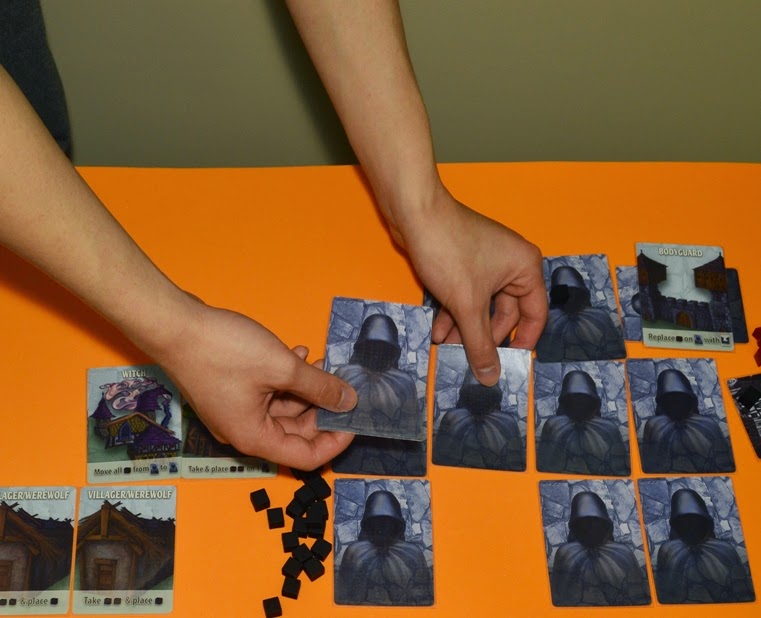 The GI places the second card down, this is also safe. 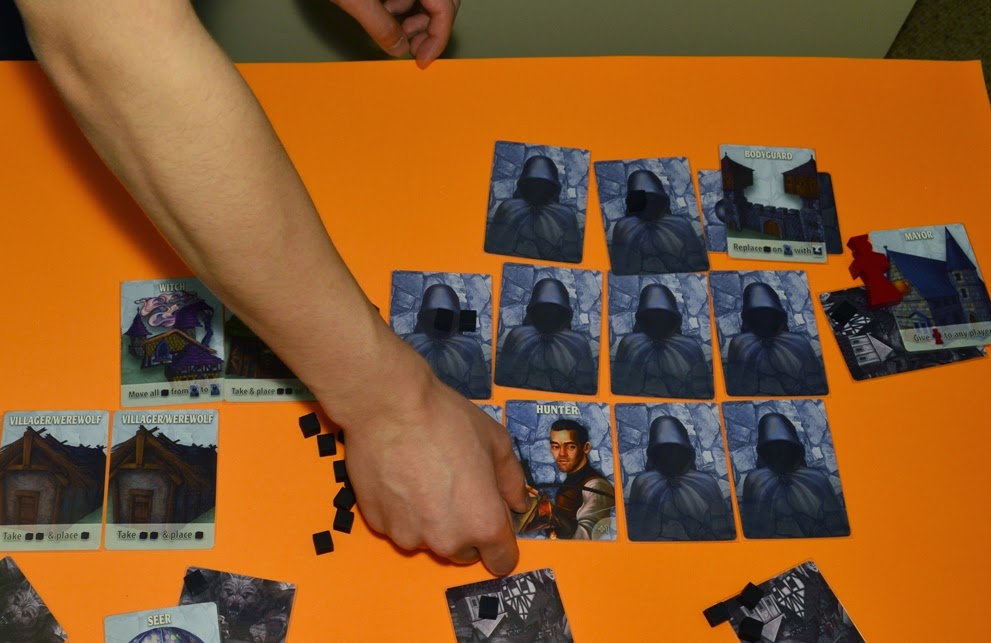 The GI reveals the last card - it is the Hunter and has been killed by the werewolves! 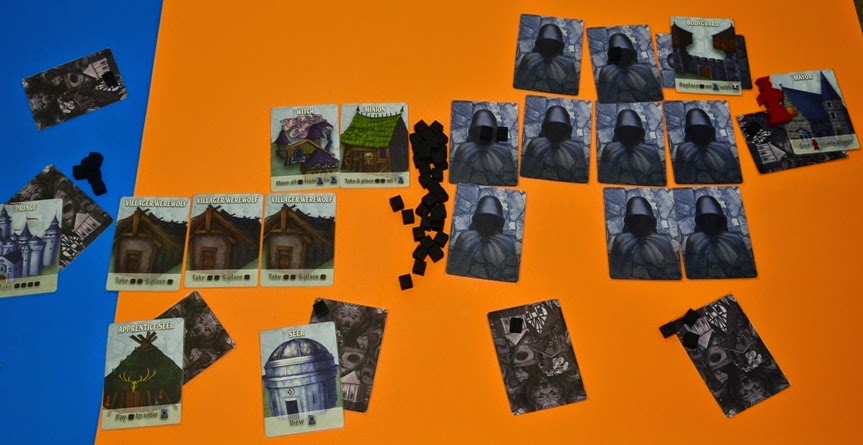 The Hunter character and the Hunter power are removed from the game.

All the power cards now go back to the middle. It is Day time again.

This repeats until someone wins. Be warned: mass arguments can ensue at any moment of the game now.