A somewhat worthy manifestation of the eponymous fairy tale, it's the game that Baba Yaga should have aspired to.

Get ready to defend against the huffing and puffing of the big bad wolf... Book/Game I of the Iello Tales and Games Book Series.

Publisher: IELLO - the same people who did King of Tokyo

Time to play: 20 minutes or so

Price Range (AUD): $30 to $50ish, the latter end of the scale if ordering online (with shipping included). Probably not worth the price, but it still looks cool on your shelf as it resembles a book.

Availability: Mainly online and in some hobby game stores

6.5+/- out of 10. (Barely borderline decent but, putting myself in the perspective of a kid, it might actually be thought of as a good game. It's basically a watered-down version of King of Tokyo minus the 'killing other players' which means it is basically a variation of the classic Yahtzee - See my Rating Scale)

As I mentioned in my introduction, this game captures the spirit of the fairytale quite well. Players roll 5 dice three times to purchase parts of a house (doors, windows and roofs). They do this by collecting symbols of the same type: the number of same symbols collected dictates the quality of the house part purchased. For example, to purchase a brick (the strongest) house part, 4 symbols of the same type must be rolled. Similarly 3 of a kind nets you wood; 2 of a kind nets you straw.

These materials actually make a difference to the defence of your house - when the wolf comes to blow down your house, for example, brick house parts have a 5 out of 6 chance of withstanding a wolf attack whereas straw house parts have a 50% chance of being destroyed. This phase of the game manifests in the form of blowing a spinner to determine which part of your opponent's house gets blown away (see rules for a better idea).

The thing about this game though is that it doesn't really have too much substance to it: but that's probably because its designer didn't intend it to be that way, given that it seems to be aimed at kids. Sure, it allows players to build houses in defiance of the big bad wolf (as the fairy tale tells us about)...but that's pretty much it. In my opinion, removing this novelty, theme and cuteness, there's no real kick to it that makes you want to come back for more.

Not a bad game at all, but not something I would necessarily pursue often. Most of its good marks comes from its thematic value and how it tells the classic fairytale quite well.

What makes this game fun?
If you really like the story of the Three Little Pigs, and want to see it incorporated into an actual game, give this a go as it does it quite well.

Here's what you get inside the box: a spinning wheel; house part tiles; dice and some cards that are used in a special game (which I have not explored here but I think they give bonus points to whoever has the most houses with flower pots or those who have the most completed houses etc): 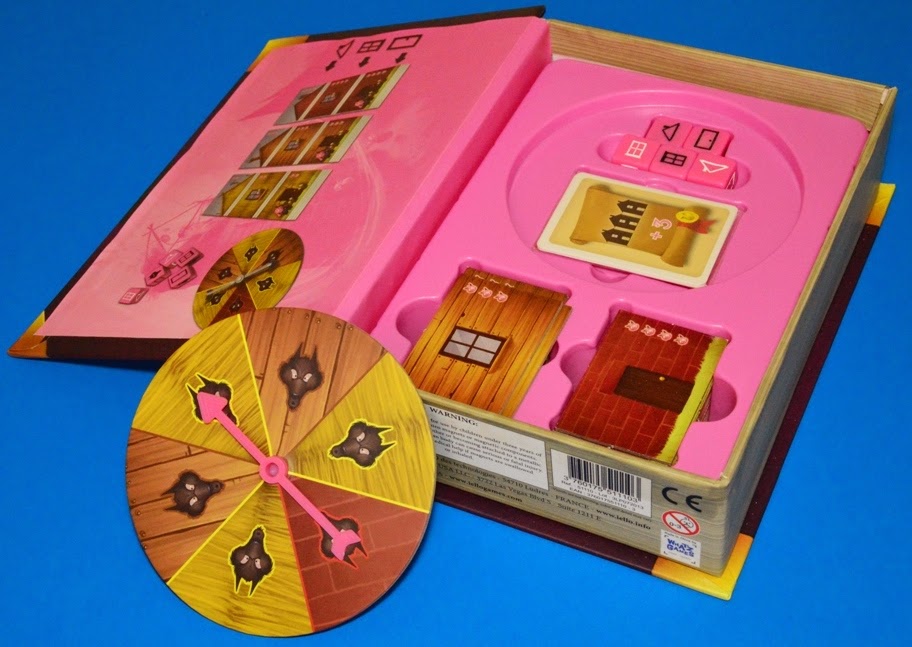 You set up the game like this - all these house parts are for up for sale.
From left to right they are, as you might have guessed: Brick, Wood and Straw. 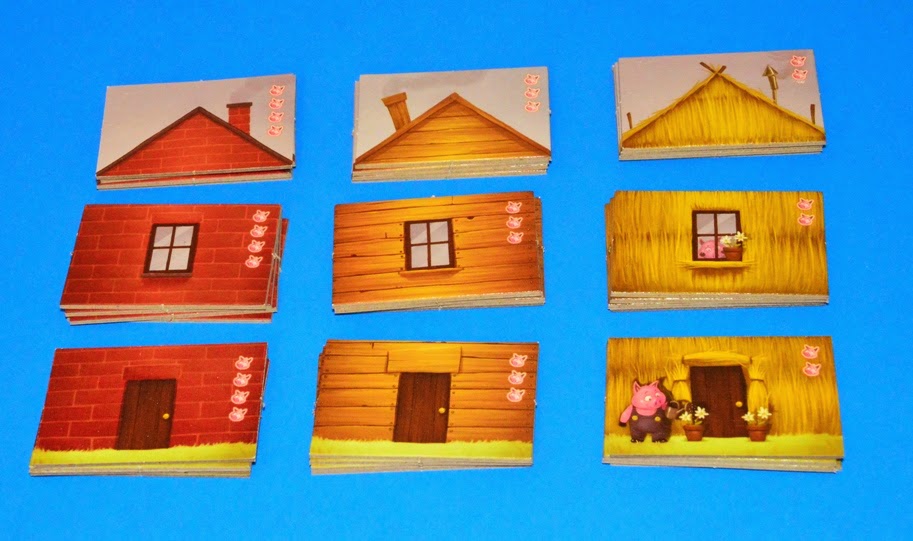 Dice rolling works in much the same way as it does in King of Tokyo .

You must roll the dice 3 times - and you can choose to keep or re-roll any of the dice you like (even those that have been kept on a previous turn).

4 symbols of the same kind (ie. 4 doors, 4 windows or 4 roofs) will buy a brick house part.
3 of a kind and 2 of a kind will net you wood and straw respectively.

If you rolled 5 symbols of the same kind, you could choose to mix and match house parts by say, purchasing 1 straw piece and 1 wood piece.

Note that the dice with black drawings are those that have 1 wolf symbol on them - if you roll a wolf symbol you can no longer re-roll that die. If you roll 2 wolf symbols over the course of your turn you must play the part of the wolf and choose a house to blow down (see below rules).

For example, suppose this was your first roll: 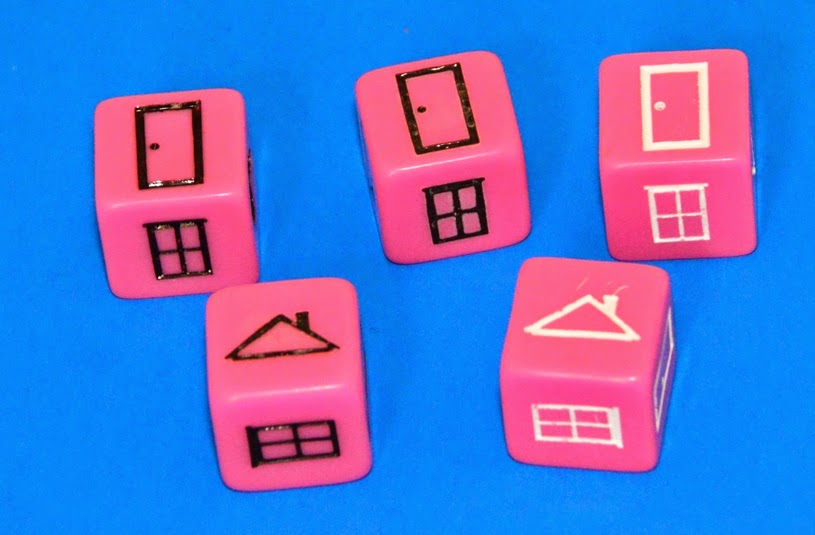 If that were so you could purchase a wooden door and a straw roof. Let's say you want to roll for something better: 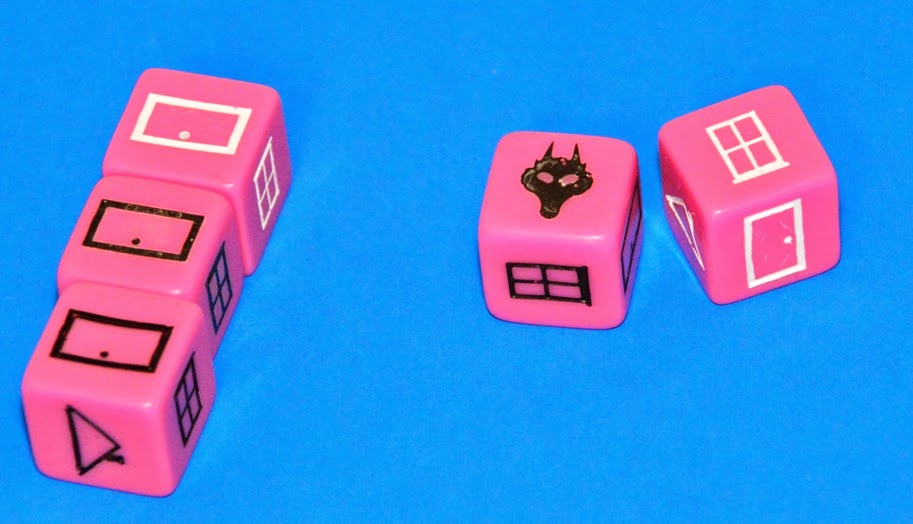 If you were greedy you could roll the two roofs again. However, here above, one of them turns into a wolf die. Once you roll a wolf, you'll never be able to roll that die again. 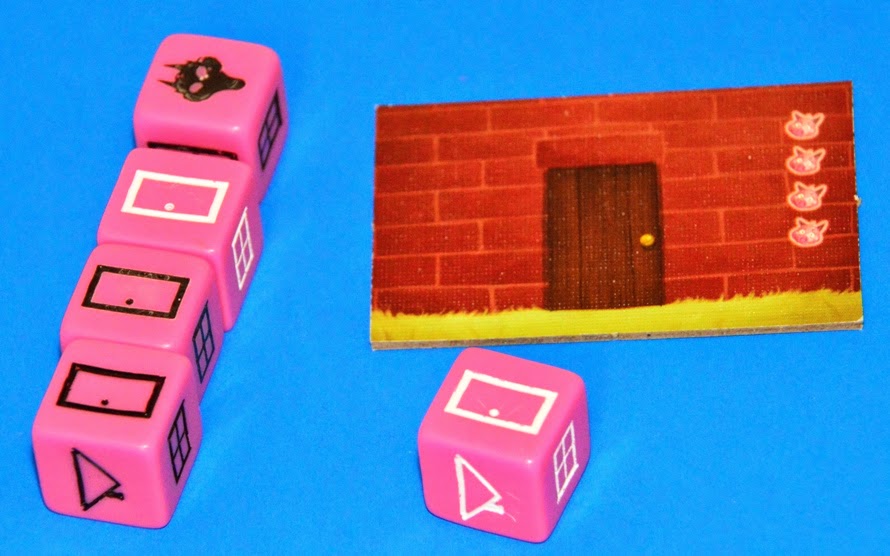 On your next re-roll you roll a 4th door. This means you can buy a brick door as shown.


Two or more wolf dice: Wolf blows the house down 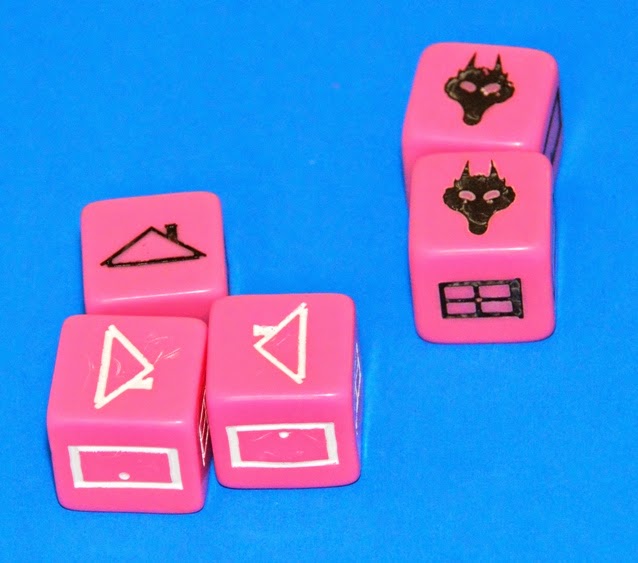 If the above was your roll, you would immediately have to pick an opponent's house that you want to destroy. Then you'd have to blow the wolf spinner.

For example, suppose you picked Bob's house to blow down. He's done well so far with these two houses shown below. You choose to pick the left house, as it gives you a guarantee that some part of the house will be damaged as he has all material types there. 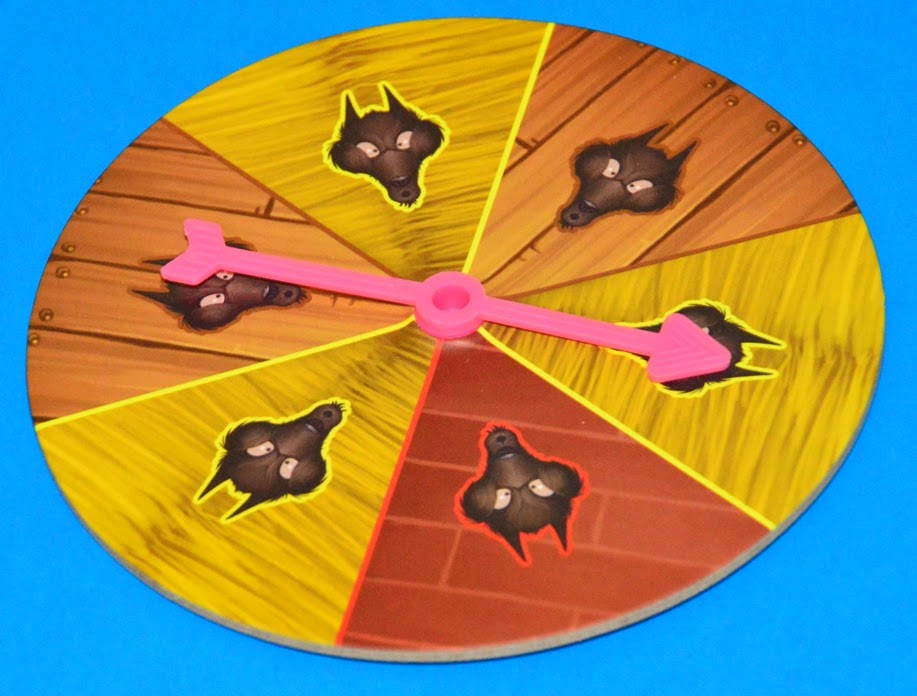 This is what would happen to Bob's house on the left: 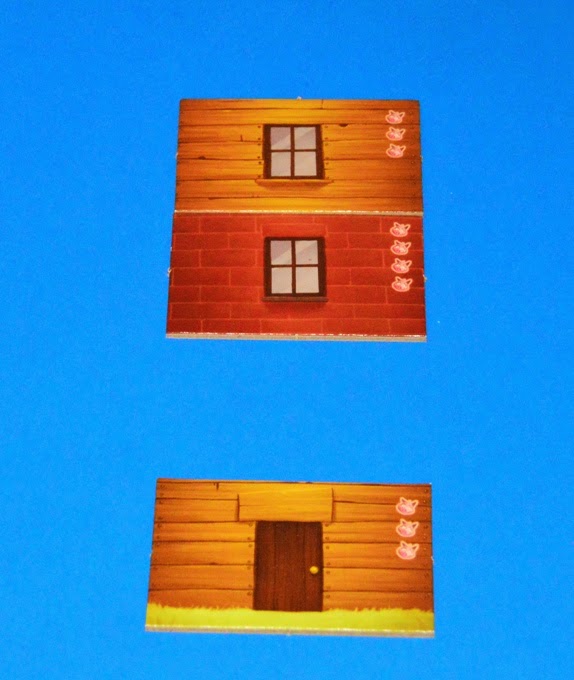 As you can see, this is a pretty cool element to the game. The only problem is that it's rare for 2+ wolf dice to be rolled AND it is hard to get the precise material you want, particularly brick (but alas, that is the whole idea of the game).

Your score is determined by the number of pig symbols you have - as you might have noticed, all the brick house parts have the most pig symbols (4) and straw has the least (2).

However, you only score pig symbols for completed houses - that is, those houses with a roof.