A set-collecting card game where everyone starts with no cards in their hand...
...in fact, at no stage of this game do you actually hold onto cards for more than a couple of seconds! 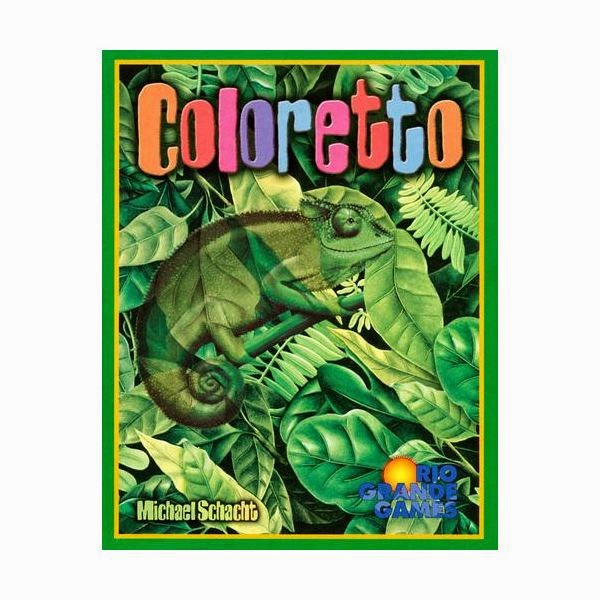 Random Fact: Supposedly the concept and game mechanics of Coloretto were used by Schacht to create Zooloretto, which won the German Game of the Year 2007

Time to play: 30 minutes or less if everyone plays quickly.

Availability: Quite widely available on eBay and online stores but I'm not sure if they would be in physical hobby stores (they probably would be).

This is one of those games that has a good novel idea. The real shame though is that it is let down by the fact that its overall gameplay relies too much on random chance. But isn't that the case for all card games you ask? Probably.

The basic premise of the game is that there are a few empty piles. On your turn, you can choose to either draw a card and place it onto any one of the piles OR TAKE one of the piles. You have no other options and all players are faced with the same decision. There are certain colours of cards that you'll want to collect (as you'll specialise in certain colours), and others that you want to avoid. Hence, eventually, some piles will have "good and bad" cards that will produce some kind of "analysis-paralysis" to your decision-making as you become unsure of whether you want to take the pile or not. This is quite an interesting concept and there is some level of strategy to this. "Contaminating" the piles with cards of different colours to cause distress to your opponents can be quite fun.

However, the main problem with this game is that there is too much room for luck. If you are the first player in that round, and there so happens to be a +2 bonus card, or a card that you want on its own (uncontaminated by other cards that you wouldn't want), you would probably just take that card straight away. There is hardly any decision to be made or strategy to invoke. In that sense, even though the same can be said for any card game, it really is the case that you are extremely at the mercy of the shuffling of cards and turn order (especially when you play with 4 or 5 players - depending on what happens, you may not have many viable or strategic options left).

Otherwise, there is some kind of strategy to this game. You do have to manage the colours that you want whilst keeping a close eye on what your opponents have. Forcing other players to take cards they DON'T want is all part of the fun.

* September 2014: Reduced marginally from 6.7. The game itself isn't too much better than 6.5 so I have adjusted this accordingly. It has a few quirks about it that make it a bit different, but that's about it.

Try it if you'd like to play a quick push-your-luck game with some limited degree of strategy.

The general aim of the game is to specialise in up to three colours and collect as many cards as possible for each of those colours you specialise in.

Everyone gets a summary card that looks like this:

Then place as many "row cards" as there are players (this card shows a bunch of 3 rectangular cards on it; in the original edition, the row card also has a lamp/light icon at the top border of the card).


Each player takes one card of a different colour and places it face up in front of them - this is one of the three colours they will want to collect.

Place the last round card into the bottom 16 cards of the supply pile of cards (by dealing 16 cards, shuffling and then putting the rest of the deck on top of this).

On a player's turn they must choose one of two actions:

1) DRAW and PLACE a card onto a row pile;
OR

2) Take a card row or "cannister" if it has at least 1 card in it. If you take a card row, you are out of this round - that is, you can no longer take any more turns this round.

So for example, if you are the last person left (ie. everyone has taken a card row pile except you), you can choose to keep drawing up to a maximum of 3 cards or you can take the card row pile at any time so long as it has at least 1 card in it.

The card row piles are emptied and the next round continues until the last round card is drawn. The player who last took a row card or pile of cards the previous round gets to go first this next round.

For example, suppose that this is a three player game. At the start of the game, the three piles are empty.

Player A must draw a card as none of the piles have at least 1 card on them: 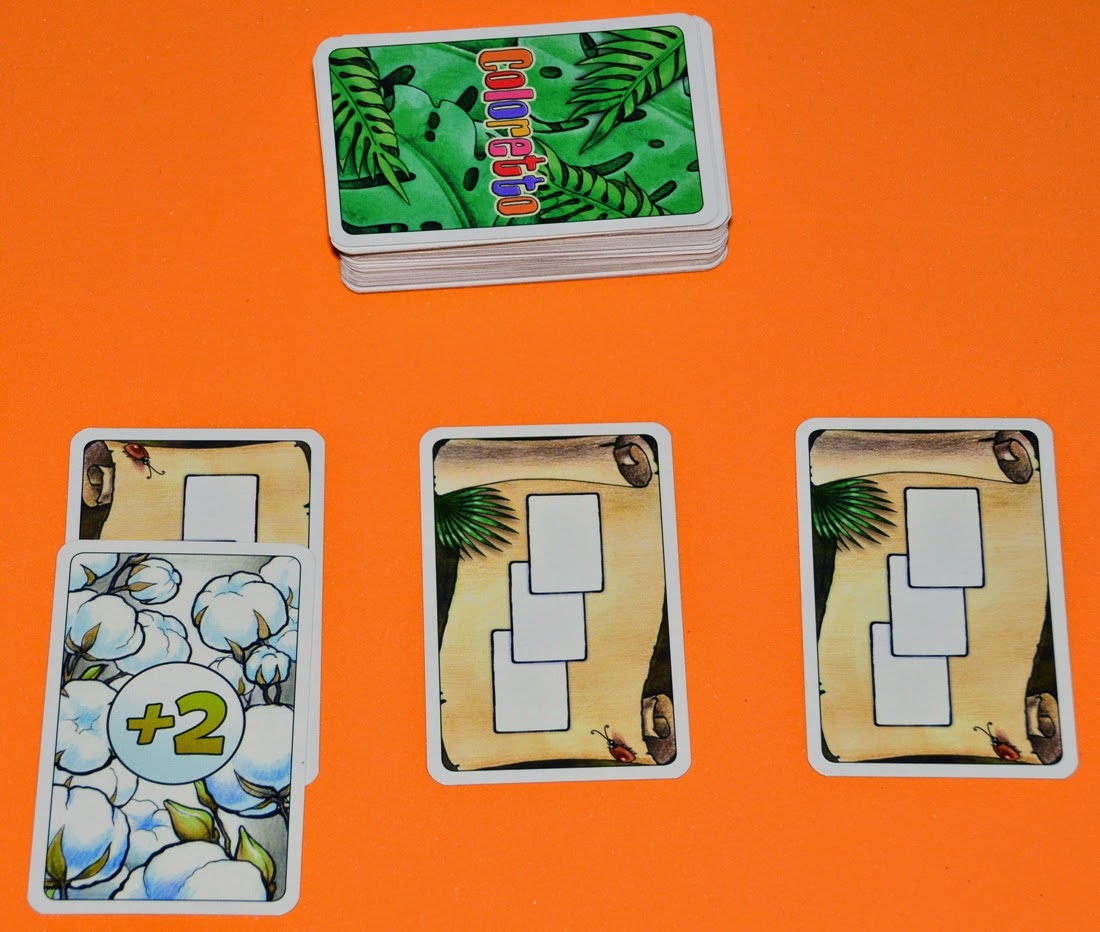 Player A decides to place the +2 card on the first pile.

It is Player B's turn now. Player B can decide to take the card row pile with the +2 card straight away, but decides not to and draws a new card like so: 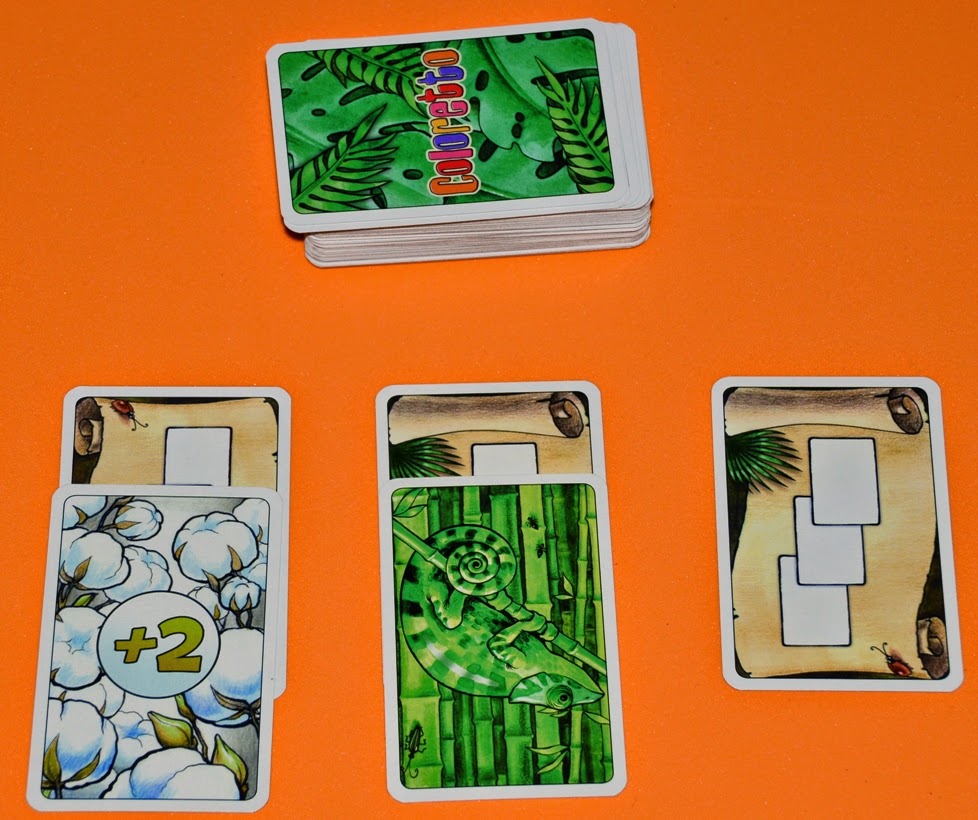 Player B draws a green. Player B decides to play it in the middle pile (perhaps to prevent someone else from taking the Green in addition to the +2 points)

Then, two more turns elapse: Player C draws a wildcard, places it on the pile on the right and then Player A draws a Yellow card: 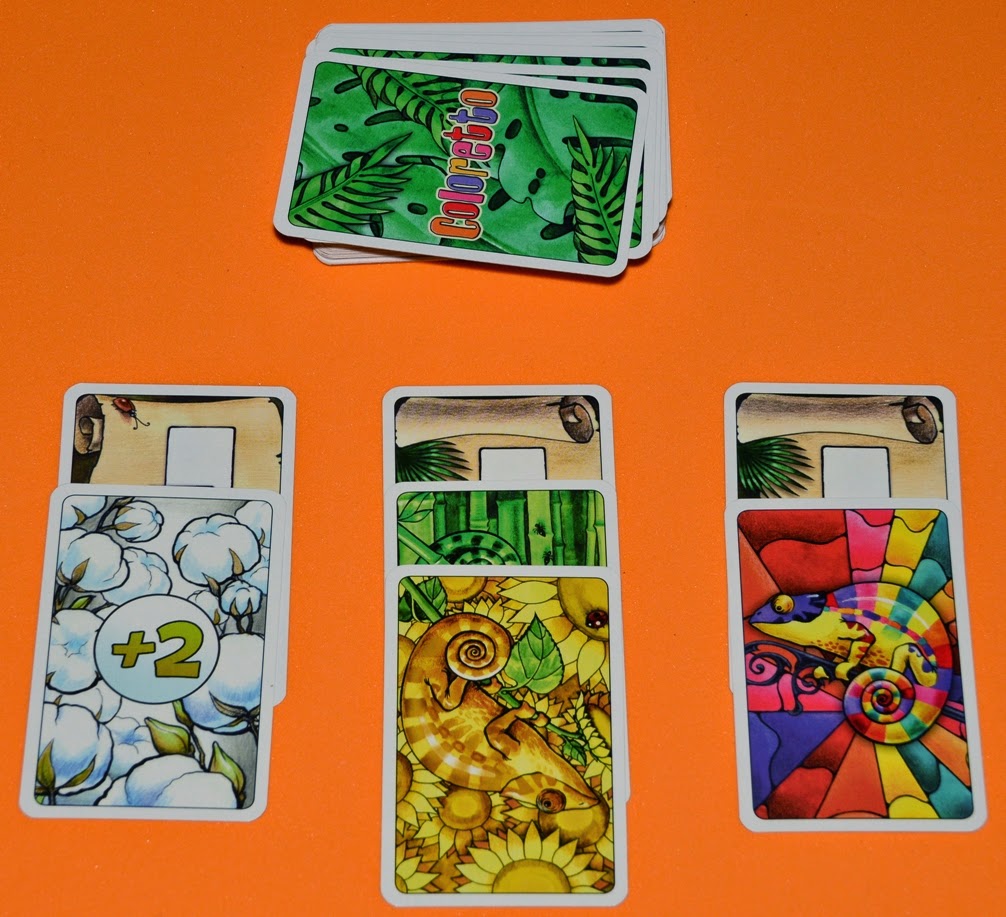 Player B decides to not draw this time. B will now take the middle pile, as she wants to collect green (since her starting card happens to be green, let's say) and does not mind collecting yellow.


Player B is now out of the round. It's Player C's turn and will then be A's turn shortly. Both have the same options: take a pile or draw a card and place it onto a card row pile. C may very well decide just to take the wild card for example right after B's turn.

When all players have taken a pile, the round ends and a new one begins.

The player who last took a row card or pile of cards gets to go first this next round.

The game ends when the last round card is drawn - when this occurs, all players separate their top 3 colours (by quantity): These cards will score POSITIVE points according to the summary card.

Every other colour scores NEGATIVE points according to the summary card. This is the case even if 2 or more colours are tied - so one of the tied colours might score positive points whilst the other scores negatively.

For example, suppose this is someone's collection at the end of the round: 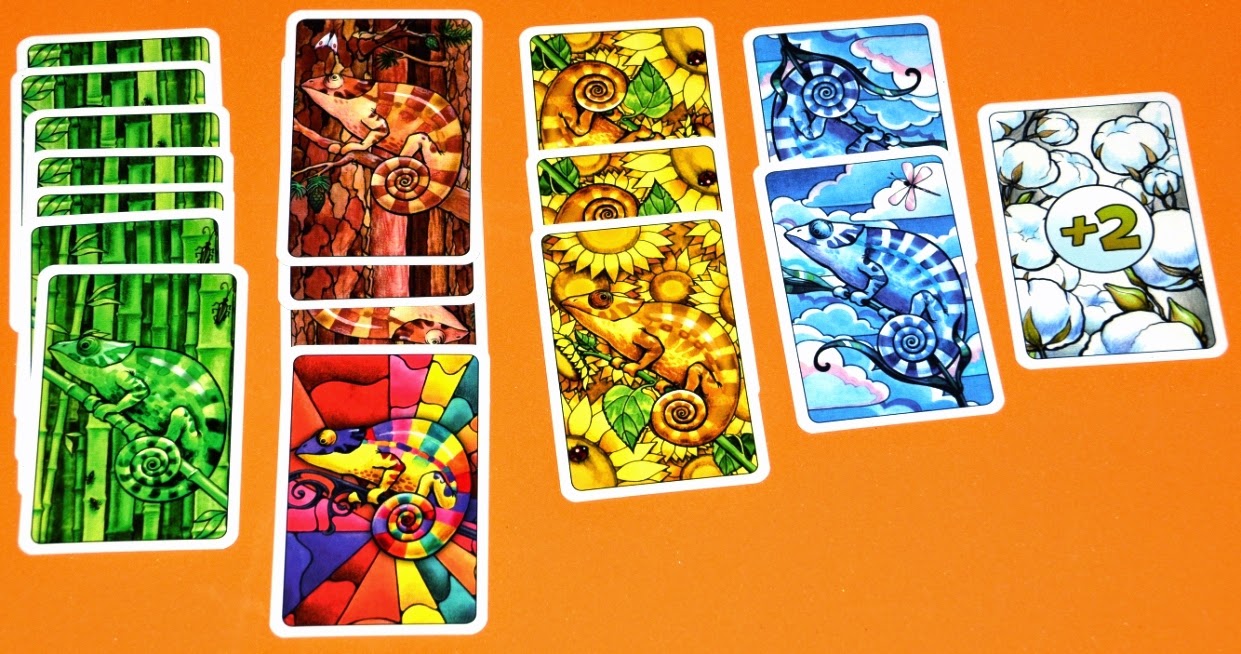 Here, this player has: 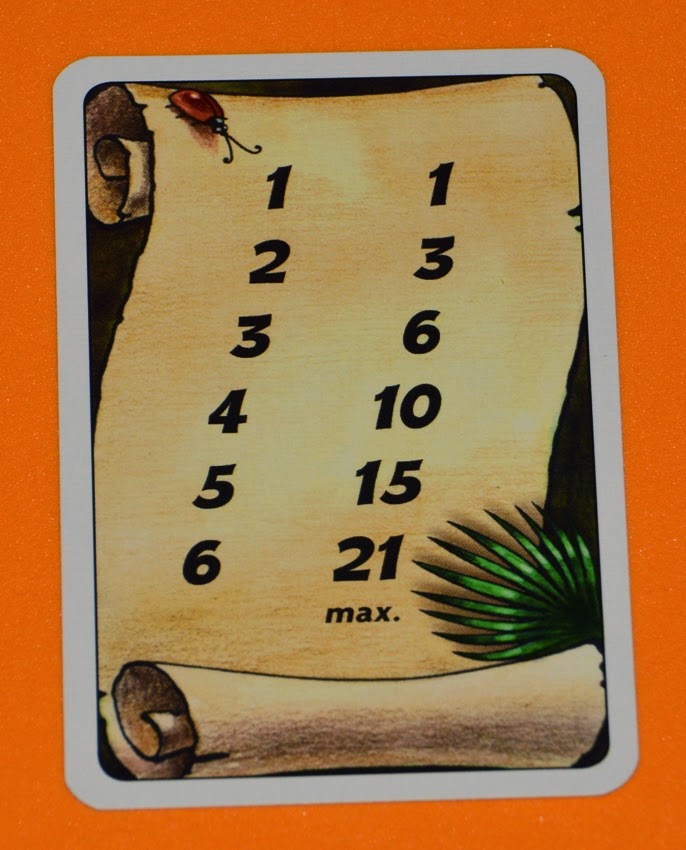 The green cards would score +21 points, as 6 cards or more will score a maximum of 21 points. Having 7 or more cards of one colour type does not give you additional points.

However, the 2 blue cards represent a 4th colour - this will be scored negatively = -3 points
The +2 card is always worth 2 points each.

The 10 year anniversary edition also provides row cards for 2-player games (they have a green background in the 10-year edition).

Furthermore, if you flip over the brown summary card, you can try the violet-coloured summary card. This presents an alternate and perhaps more challenging scoring mechanism in which 3 cards is the optimal number and nets you 8 points; but every card after that gives you less points.(4 cards gives 7 points; 5 cards 6; 6 cards 5). This can certainly mix up play and provide for an interesting experience.

There is also a golden joker card like so: 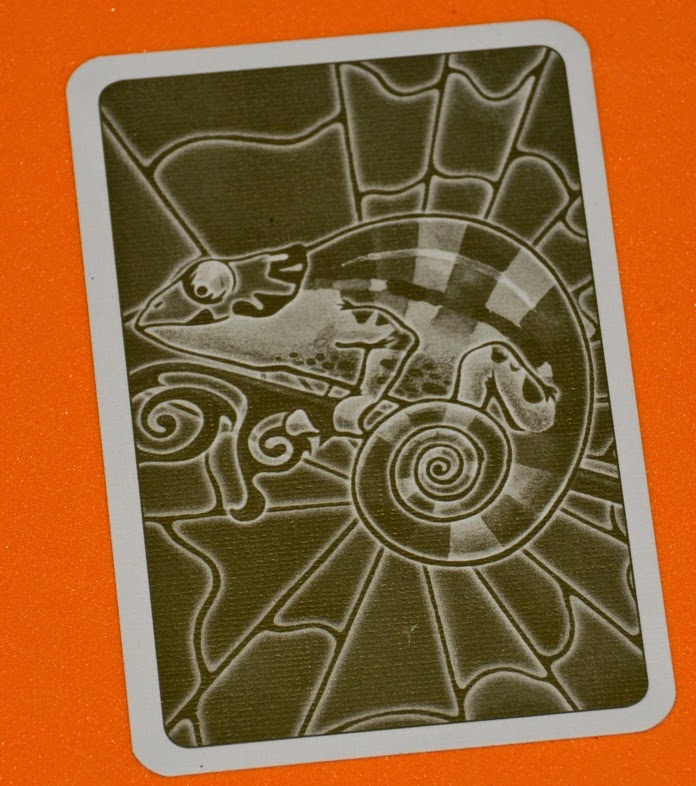 Like the multi-coloured joker above, this card is also a wildcard but the catch is this: if you pick it up from a pile, you must blindly draw one card from the deck and add it to your collection - a risk probably worth taking unless your 4th colour is looking dangerous!!
Posted by Andre Lim at 23:47