A deck-building game that is (allegedly) often compared with Magic: The Gathering. 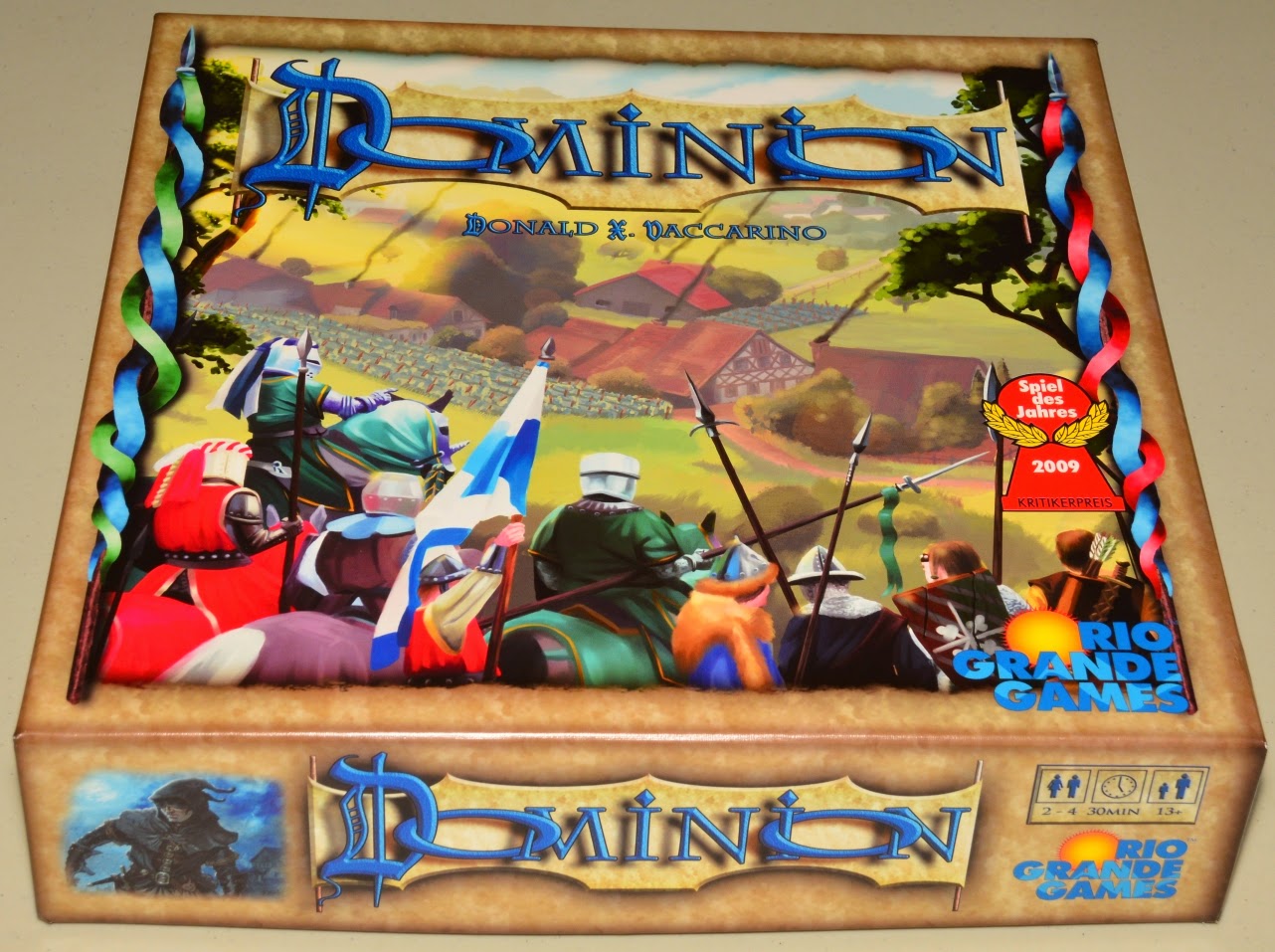 As a point of note, I actually tend to avoid "card-collection" games as they require too much investment and time. However, there are always exceptions to rules; Dominion is a fairly good one and has much strategic depth for a group of 3 to 4. You don't need to collect all the cards from the expansions to enjoy this game; the base game will do.

Expansions: There are plenty, each containing around 150, 350 or 500 cards to supplement the original.

Players: 2 to 4 but plays more with expansions such as Dominion: Intrigue (which allows for up to 6 players - but this arguably slows the game down considerably and wouldn't be fun for non-gamers)

Time to play: Apparently at least 30 minutes+. Can take much longer if playing with new people who aren't good at deciding.

Price Range (AUD):  Quite expensive given that it's only a set of 500 cards!!

Cheapest copy is about $49 (pick-up; there is a site that sells it for about $44 now as I write this, but this is not including shipping and it's on sale). On average, if you order it online the price will be between $62 to $79 including shipping. You are basically paying for shipping the weight of a regular-European sized box that acts as a storage box for all the cards. But the box is useful as the sections that hold all the cards are labelled. Still not really worth it though because of the expensive shipping if you ask me, at least for us here in Australia.

Availability: As it's quite well known, it should be in established hobby game stores and online.

This is a pretty nice game. The only problem I have with it is that you often get this effect where "everyone is doing their own thing" and it becomes quite hard to follow what everyone is doing on their turn - especially in the more advanced stages of the game where everyone has powerful decks of cards. In other words, there is little to no accountability in terms of checking whether a player, on their turn, is strictly adhering to the rules of the game. But, to be fair, this isn't so much of a problem if everyone is conscientious and doesn't mind being a little more attentive to what someone is doing on their turn.

A little context might help you understand my concern with this game. This game is a deck-builder in which everyone builds their own deck of cards (which represents their respective dominion or kingdom). That is, all players vie for the best cards from a common pool of cards available to everyone. On your turn you draw 5 cards from your deck. You then play whatever you can (action cards, or coin/treasure cards to buy better cards), discard the rest of your hand, add the newly purchased card into your deck, and draw more cards. This procedure can be hard to follow at first but you will get the hang of. Soon, the cards you've just acquired form part of your deck and your deck becomes even more powerful.

The other smaller problem I have is that the game can take a long time between turns as each person tries to decide what they do with their deck of cards - this becomes quite apparent towards the mid-to-late game where everyone has purchased powerful cards that give them extra actions and money. It is hard to track what everyone is doing without taking up a whole lot of time and discussion. However, if you play with the right group of people (those who know the rules very well and don't mind waiting for each player to take their turn - either because they are patient or because they take interest in other people's turns), this game can be quite fun. It also helps to have played this many times before so that everyone is familiar with all the cards and their abilities.

On the upside, there is quite a nice dimension of strategy to this game. If you go for cheap victory cards too early, you will clog up your deck as they are pretty much worthless in terms of helping you obtain more (and the better) victory cards. If you try to make your deck too efficient (by obtaining gold coins and powerful action cards), you may narrowly miss out on the best victory cards if you get your timing wrong.

The tension as each player tries to get the best combination of cards makes for a good game. There are also different combinations of cards that may prove to be effective.

* September 2014: Personally I think this game may deserve a higher score, but I feel that the nature of this game (deck-building) is such that people won't necessarily latch onto the game. Thus giving such a score may be deceiving, to say the least. There is just so much strategy waiting to be explored, especially if you play the game with different combinations of cards.

If you like the idea of a deck-builder game, where each player vies with others over a common pool of resources and tries to make their deck the most powerful, give this game a go.

This is what's inside the box:


The goal of the game is to have the most number of victory points in your deck when the game ends.
The game ends when:

Starting deck: Everyone gets a personal starting deck of cards of 7 Copper coins and 3 estate (victory) cards - this represents their dominion. This is shuffled and everyone draws 5 cards.

Supply area: All 3 treasure piles (Copper, Silver, Gold); 3 victory card piles (Estate, Duchy and Province); 1 curse pile; as well as the trash pile card are placed in the middle where everyone can access it.

The game recommends that you start with these 10 sets of Kingdom Cards, which are to be placed in the supply area alongside the treasure and victory piles (You can change these cards for others when you become more experienced with the game):

Before I explain gameplay, it's important to remember, as I've said in an above picture, that everyone has their own deck and personal "discard area". The discard area is on your far right - it is used to put not only cards you have played (including Action cards and Treasure cards) BUT ALSO cards that you have just purchased.

I won't bother explaining the effect of every card as that would be ridiculous - there's just too many to explain.

But here are the Smithy and Remodel cards just to give you an idea - you can see they each cost 4 gold coins (the number on the bottom). 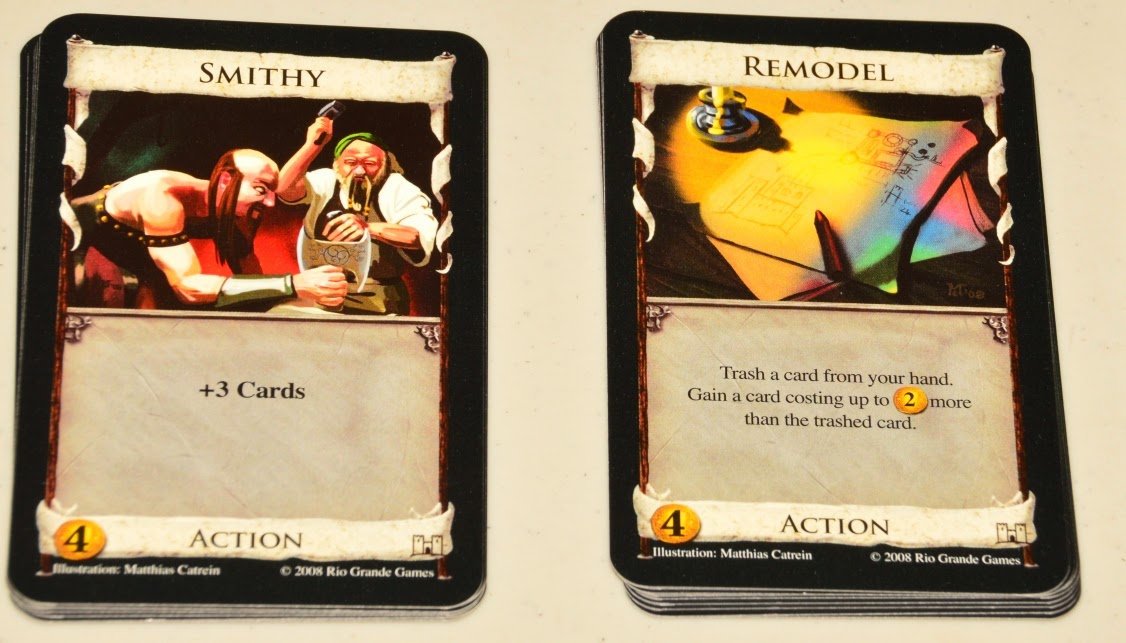