I wouldn't be surprised if this won the Spiel Des Jahres 2014 this upcoming week (the winner is to be announced in approximately two days on July the 14th, German time*).

It's probably my "new" favourite (family) party game - as my friend Nimo says all this game really is is "charades without the embarrassment." 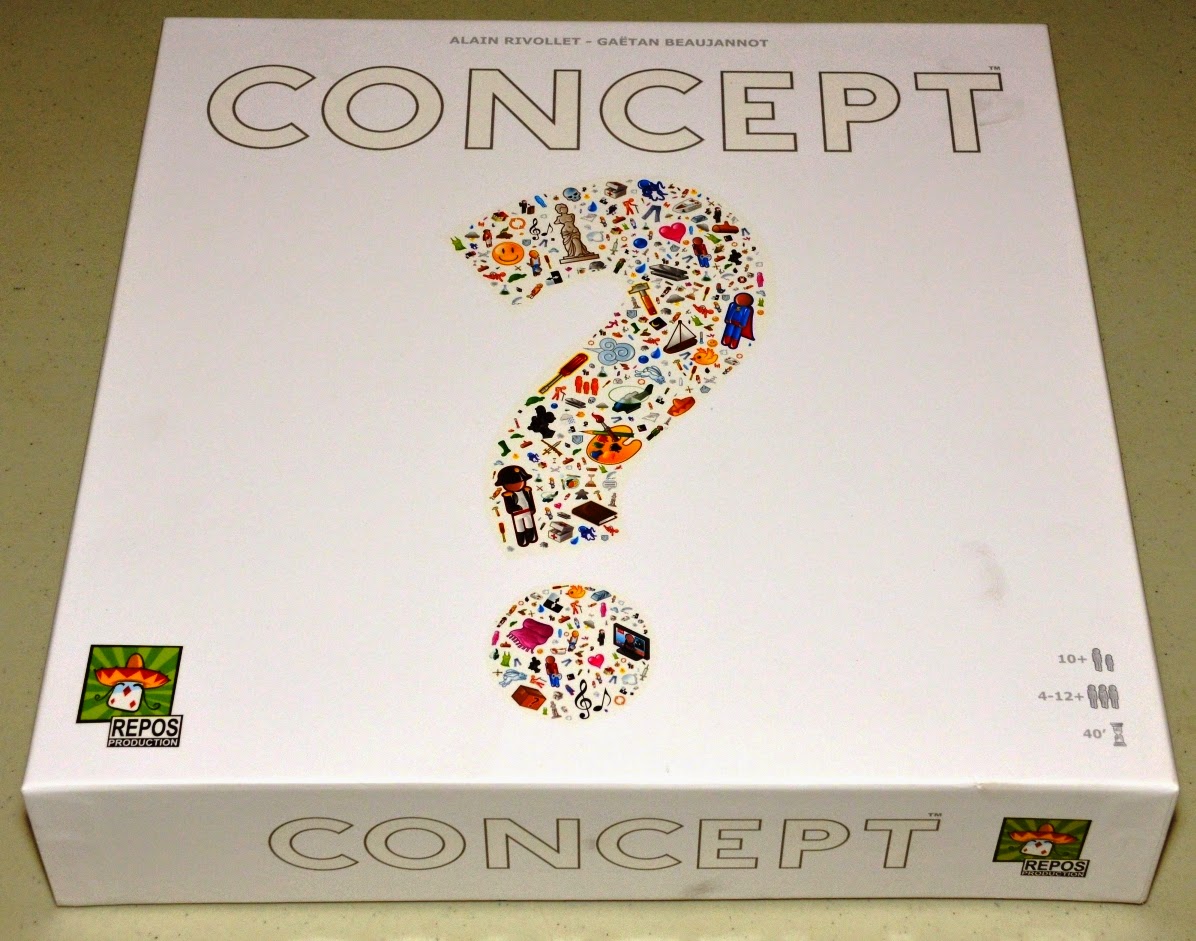 Players: 2 to infinite really; the box says 4 to 12+, though you may need to have more sets of symbol/legend sheets and the main board has to be visible by everyone.

Time to play: As long or as short as you want but the box says 40 mins+

Availability: Online mainly at the time of writing, as it's a new game. But you should start to see it in hobby stores over the next year.

Awards: Spiel des Jahres 2014 Nominee, at the time of writing; in my view though, even without playing the other two nominees, it probably deserves to win because of its flexibility and wide appeal.

7.6+*  out of 10. (Great to potentially Excellent when everyone becomes familiar with the game - See my Rating Scale)

This is a really fun and challenging game. Players are tasked with the problem of how to communicate a concept or message to a group of people. In that sense, we are already familiar with this as we've played games like Taboo or Charades. However this one takes a new twist.

The game designer has provided a board with symbols that represent basic things or features (eg. a figure of an old man means "Old, Ancient or Past"). One person, or a team of them, must try to explain or convey a particular concept or idea to people using these symbols. This is done by placing markers and cubes of different colours - green markers stand for the main concept whilst the other colours demonstrate sub-concepts relating to the main concept. Cubes of a certain colour are used to explain or add more meaning to the related concept. See Rules below for a better idea.

Tom Vasel from The Dice Tower recently did a review on this game and remarked that he thought Concept was more of an activity than a game. In some ways, I understand what he means. When I played this with my family and friends, we didn't strictly adhere to the rules provided by the game. We just kept playing on and on and on and made up words or ideas for people to guess rather than relying on the cards provided by the game. In that sense, it does feel like an activity because there is so much scope and freedom for players to choose from.

I'd highly recommend to anyone that they try this game out as it's accessible to most people. Kids may have a hard time expressing ideas though. The only real downside with this game is that the symbols are hard to understand at first and the game doesn't help because it doesn't provide many symbol sheets for people to look at. You will spend most of the game looking at what the symbols mean. A few practice rounds will overcome this though.

However, before I get carried away with this self-imposed hype, I'll reserve any conclusive judgement on this game as I'll need to play this more before I can have a firm grasp of how good it actually is. But at this stage in time, I think it's a real winner.

*July and September 2014: I've had time to consider my rating. I've lowered it from 9+ to 7.6+. The score of 9+ was really inflated by my personal bias; please do note that I absolutely love this game and I play it a lot with my sister. But this rating is not about what I like, but me being as objective as possible when reviewing the game. Usually my sister and I play to our heart's content by randomly making up words to guess - this is because we are quite familiar with the symbols on the game board (and we have the time, and willpower, to persevere with the game). However, when introducing the game to a new group of people, it can be quite difficult for people to become familiar with the symbols in a short space of time (especially if they are impatient and want to jump straight into the game). Therein lies its downfall - making use of the symbols provided is not immediately intuitive in that sense and the learning curve, whilst not steep, is a significant obstacle. Furthermore, if you set a time limit for people to guess the word/concept, it makes the game quite hard. If you don't mind giving people unlimited time, it can be an interesting game. This moderate learning curve prevents me from giving it a score of 8 and above; accessibility to the masses is a very important criterion.

If you enjoy a great party game that requires not only a large amount of creative thinking (and open-mindedness I suppose) plus an ability to communicate ideas to people give this game a shot.

Setup and Gameplay is simple.

This is what is in the box:


One of the only downsides of this game is that there are only two legend or symbols sheets that translate the meaning of the symbols. I won't show the whole sheet but here is some of what is shown:

The aim of this game is to guess a word or concept.

You do this by placing markers and cubes on the game board, part of which looks like this:

The Green Question Mark Marker is always the MAIN CONCEPT.

For example, if the word to be guessed was "Physics" the Green Marker would arguably be placed on the Science symbol above as it is primarily thought of as a science.

Green cubes, which are cubes that relate to the green marker, add further meaning or describe the main concept.


An example (as provided by the instructions book)

Suppose the thing to be guess was Eiffel Tower. This is a suggested solution 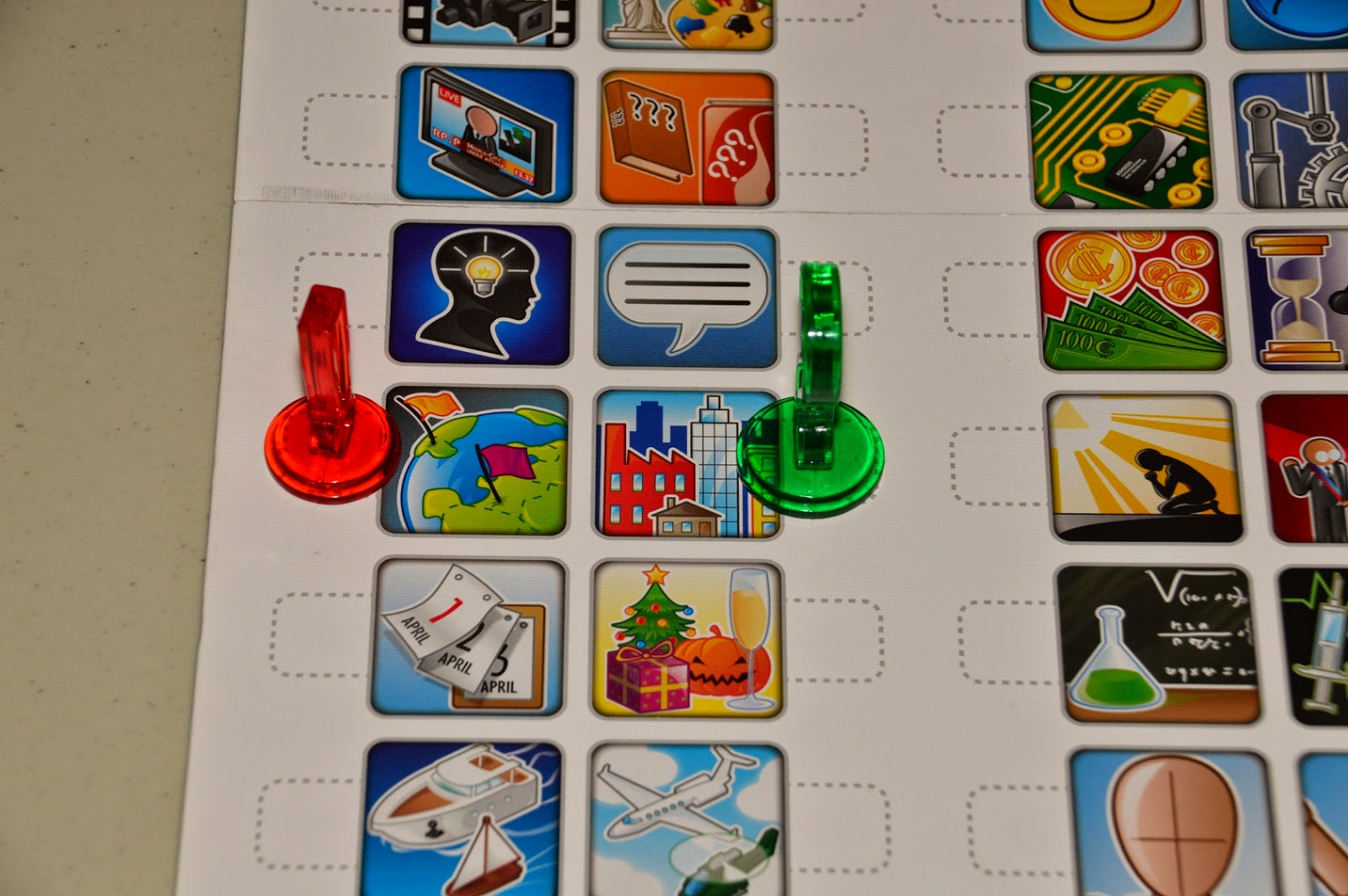 Then we add further meaning to this by describing each of the symbols (note that you may choose the order in which you do this for emphasis - and you can be creative with the way you stack cubes): 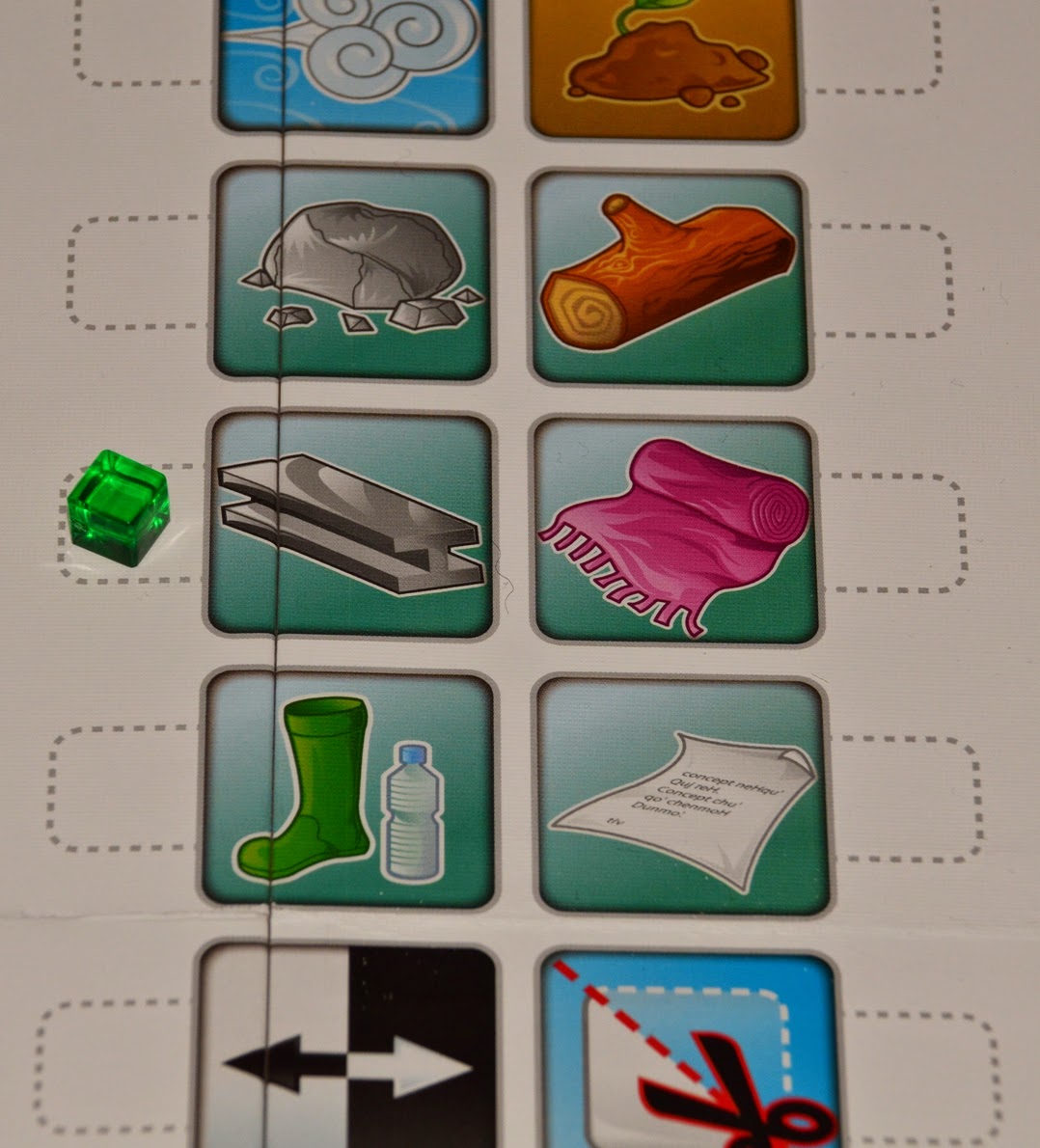 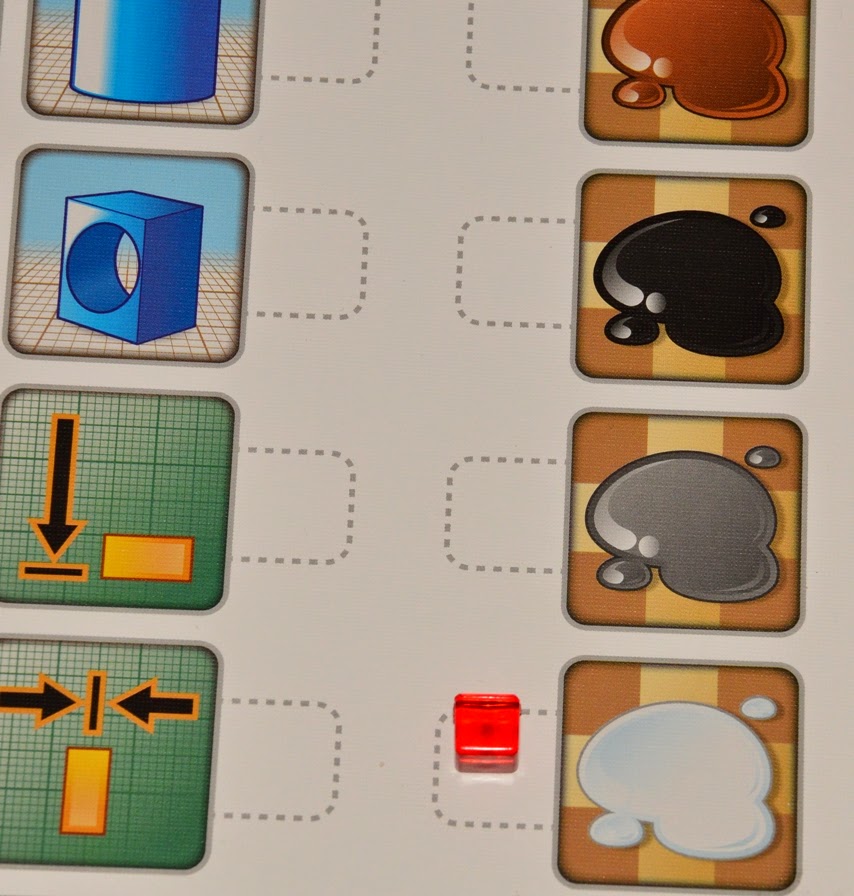 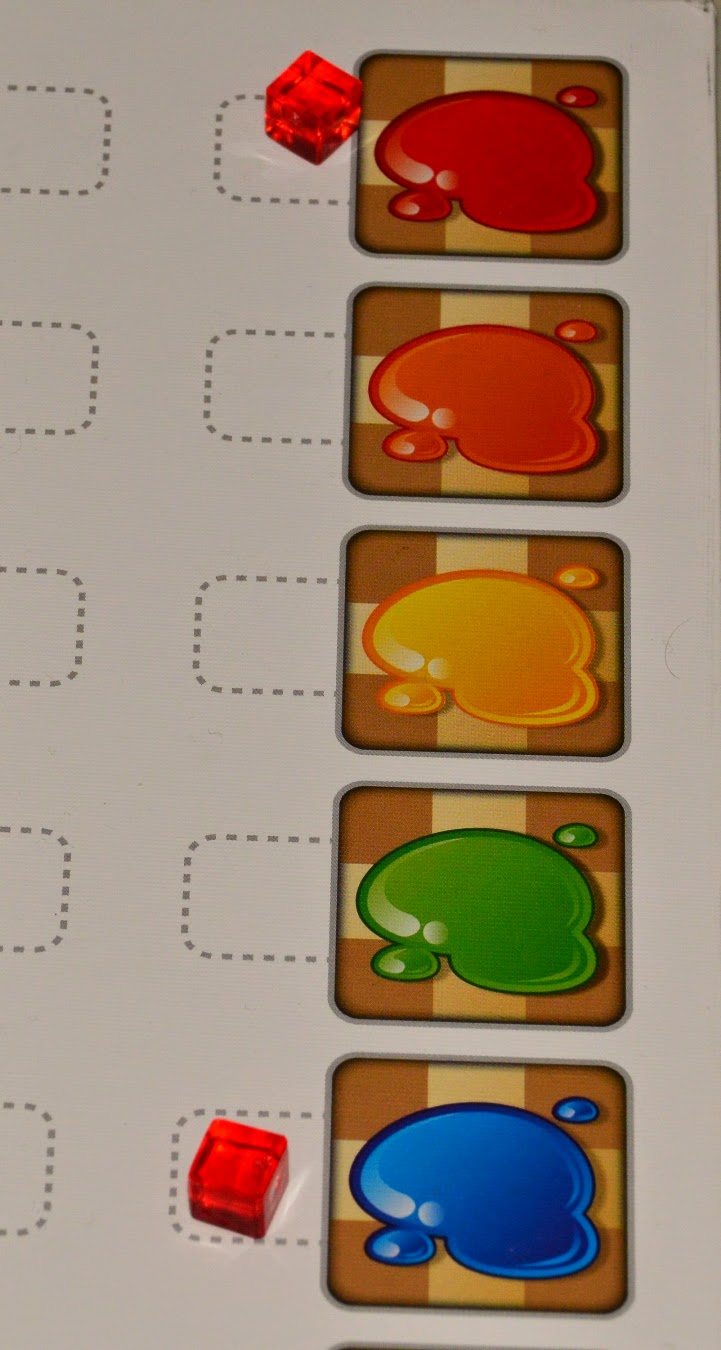 This is what the final game board looks like:

You can make up your own custom scoring. I like to play it in a never-ending mode, with each player taking turns to put up concepts to guess. We play the guesser scores 1 point and the person who places the cubes also gets 1 point. You could also split up into teams.

Teams: The game proposes a team system for those who are putting the cubes on the board, which is a bit hard. What happens is two people randomly partner up with each other, they draw a card and find a word they like, and then put cubes/markers on the board for people to guess. If a person from the crowd guesses their word correctly they get 2 points whereas each member of the team only gets 1. This is a bit of a silly scoring system because it creates an incentive for a team member, who may be trailing someone else who is guessing the concept, to make the person in the lead not guess their word correctly - or vice versa, where the person in the lead doesn't want anyone to guess their word correctly. On the other hand this may create more strategy for veterans of the game who will have to place their cubes in such a way that only certain players understand what they mean.