One of my favourite series of games.

It's an absolutely fantastic present for a close friend or loved ones and a great game to introduce to a small crowd.

Timeline: Inventions (2010)
[Probably the best version to introduce to a crowd of people with various interests, as invention dates are arguably more 'guessable' or intuitive than say sciences or historical events.]

Timeline: Historical Events (2011)
[Great version, probably my favourite alongside Globetrotters. It deals with events from modern history and ancient civilisations. As a friend pointed out to me though, much of it appears to be Eurocentric, which I don't really have a problem with]

Timeline: Diversity (2012)
[Mixture/variety of themes, quite a random mixture including discoveries, science, arts, events, music, inventions, monuments and sport but the version can be fairly challenging]

Timeline: Music and Cinema (2013)
[Great for music and movie lovers, but certain generations won't understand all the cards - for example, my mother had no or little idea who Rihanna was or where Amy Winehouse's songs fit in the spectrum but she absolutely smashed all the 70's and 80's songs and movies. It's a great a cultural package of sorts]

Many of these versions have random promotional cards that don't exactly fit the theme (eg. I remember the Discovery of Penicillin and "the Dolmens" card, I think, in the Inventions pack). Each version should have 110 cards each, but the cards are quite small.

Cardline: Animals (2012)
[Order a wide variety animals based on weight, life expectancy and length] (Interesting/cute - something different. Comes with 100 animals]

Cardline: Globetrotters (2013)
[Country/Nation-based. Order countries based on GDP, Land Area, Population, CO2 Emissions - I love countries so this is my joint favourite with Historical Events. Comes with 100 countries]

Arguably, the Cardline series gives significantly more replay value than its Timeline counterpart as there are different time-unrelated variables to choose from (eg. ordering animals by height, weight or life expectancy, which leads to different games). The cards are also quite large, being about 1.5 times larger than the Timeline cards as shown in this picture:

There is also this 2012 version packaged above that provides bigger cards which are a selection of cards from 3 of the different versions up to 2012 (presumably Inventions, Sciences and Discoveries + Historical Events, though I'm not sure). Unfortunately, being the nature of a selection this version doesn't have all the cards! This may not sit well with people who want to collect all the cards; but if you are fine with that and not too ambitious with collecting every single card or theme under the sun, then this is probably the best version to get. It may also create a larger timeline than normal, but is still pretty cool!

There are possibly (probably) more versions to come.

Players: 2 to 8 (possibly more if you mixed up all the versions but it would take too long between turns - I wouldn't do that as it'd be too hard to sort back each version when you're finished! Though do note that each version is colour-coded for that very purpose)

Time to play: Quite short, can be around 15 minutes

Price Range (AUD):  Newer versions cost up to $20 on average. Cheapest price is about $15. Most expensive is around $30 to $40 (when ordering on eBay because of shipping - in which case it's probably not worth it)

Availability: Quite widely available in hobby game stores and online

Timeline is simple to explain, usually not too challenging (but sometimes can be, depending on the theme you choose) and always fascinating. You can learn a lot in one sitting.

Players basically just have to decide if one historical event (eg. the date of an invention or discovery) was before or after another, and place it accordingly on the timeline. Accordingly, the timeline becomes longer and longer and more challenging as more players and more cards are played. Please see the Rules section below for more details.

Amazingly, there are many themes to also choose from which means that there is something for everyone. Some of my friends prefer the Science and Discoveries version, as it's probably the hardest. I like that one, but I prefer the Historical Events one as that deals with classroom-history type of events. Then there's the widely accessible Inventions version where everyone has a rough idea of where everything belongs as that tends to be more intuitive as people can group events into vague time periods.

The only bad thing about this game is that the cards are quite small and the font is a bit hard to see for those who struggle with close-range vision, particularly the elderly. Also, people may find it slightly intimidating with the more challenging themes or topics (for example, the Science and Discoveries version is hard as it has cards that reflect when Oxygen was discovered or when a certain species of plant was discovered, which are all hard to guess). However, once people play the game they will realise that, whilst the game does require some degree of knowledge, there always is an element of guesswork that makes the game fun and unpredictable.

Another small downside is that there is also minimal replay value as the more you play the game, the better you get at remembering the dates (which can make it unfair when you play those who are new to the game). The exception to this is Cardline, which focuses not on dates but different statistics. Otherwise, this can be overcome by mixing different versions (which, as I've said above, I wouldn't do, because it's too hard to put everything back in their respective tins, though each version's cards are colour coded). Looking at it from a different perspective, if your game group enjoys a challenge, this may not even be a problem at all as you may want to play competitively such that remembering dates is essential.

The other small 'bad thing' about this game is that it is obvious where some of the cards belong on the timeline. For example there is a card in the Historical Events version called something like "The Earth is formed" which quite obviously sits at the extreme left of the timeline. There is also a "Dinosaurs become extinct" card. However, some of these cards could be challenging if the versions are mixed - it may or may not be immediately apparent, for example, if the Discovery of Fire or the Stonecutting (I think) for example was before dinosaurs were extinct.

* July, August and October 2014: Revised down from 9+. Whilst this is a great party game, I feel a little uncomfortable saying that this is one of the best "party" games on offer; it certainly would be one of the best trivia games on offer. In terms of accessibility to the masses, it is definitely there in part, but its potential for greater glory is somewhat diminished by the fact that some people (those who don't know their history or trivia) may feel intimidated or ashamed if they don't know the dates of certain events. I feel that this is more a game for those who enjoy keeping up to date about current affairs, latest developments in technology or world events (with the exception of say, Timeline: Music and Cinema; but at the very least the game requires some kind of liking for a particular field!), and that is why I've revised my score downwards. Timeline: Inventions in my view remains the most widely accessible version as everyone can relate, even if it's superficially, to the subject matter. I also question whether it has a high replay value (though you could mix different sets together). Replay value is also questionable, given that the same sets of cards can be memorised if played lots of times.

If you enjoy a friendly, approachable "trivia-like" game that is fun in a party environment, whilst also educational, try this game. It's one that generally appeals to the masses.

Gameplay is super easy. I will demonstrate gameplay for the Timeline series, which is essentially the same as the Cardline series (only except for the fact that the latter uses other units of measurement such as ranking countries by their population, land size, CO2 emissions or GDP, rather than dates)

Timeline: Inventions recommends that each player has the following number of cards:


However later versions simply specify that everyone is to take 4 cards each, with the proviso that it's more challenging to play with more cards. As such players may simply agree as to how many cards each person gets (which can vary, for example you could give Player A more cards if they are really experienced etc)

Deal the relevant number of cards WITH THE NON-DATE SIDE FACE UP. This is because the date side is the "answer side".

Suppose it's a 4 player game in Music and Cinema. One player, Player A, might player gets a hand like this:

The remaining deck of cards is placed in a stack like so:

I like to play a variant where the person who guesses the closest date of the top card on the deck gets to go first.

This top card is flipped over and placed in the middle of everyone like so. This middle area is where all cards will be placed and is known as the Timeline: 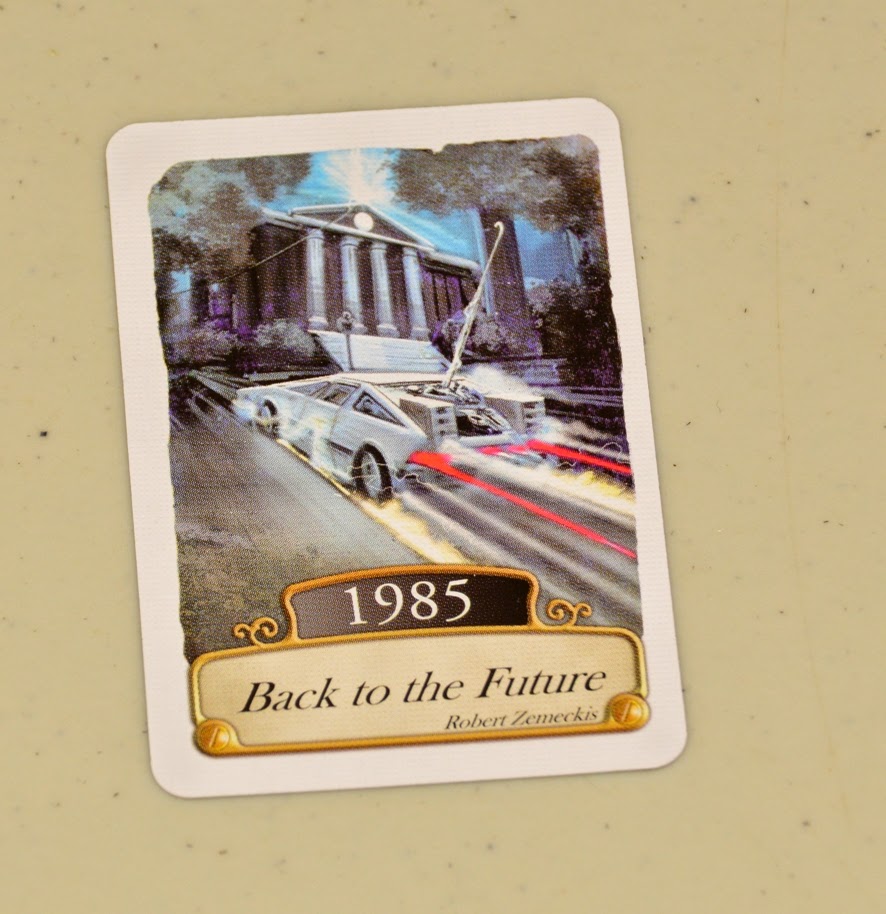 Now, Player A has to pick ANY ONE (and only one!) of their cards, and decide whether it occurred AFTER Back to the Future (after 1985, to the right of it) or BEFORE that movie (before 1985, to the left of it)

They place the card where they think it belongs:


And then they flip it over:

If they are right, the next player (Player B) gets to play a card; if they are wrong, they discard the wrongly placed card and draw a new card into their hand!

You can see that as more cards get placed down (correctly), the longer the timeline becomes and the harder it is to make a correct guess.

So suppose B places their card down in the timeline, and it's correct like so (Lord of the Rings: The Return of the King):

After more turns the timeline could end up looking like this

Winning and the right of reply rule

The first person to get rid of all their cards wins with one qualification.

The qualification is what someone aptly described to me as the "right of reply" rule which is this: If you are the only person to get rid of all your cards after everyone has played the same number of cards down (ie. after everyone has played the same number of turns), you win; however, if one person gets rid of all their cards, and someone else (or more) is also able to play their last card after you (without playing more cards or turns than you in total), then a tiebreaker or "sudden death" process commences.

Those tied players each draw one card and play until someone gets it right. If there is again a tie, then this process continues until a winner is found, unless your group doesn't mind tied winners.

So suppose in this example the turn order goes like this: Person A, Person B, Person C, Person D.

After 4 turns (ie. after everyone has played 4 cards each, making a long timeline about 16 cards long), Person B plays their last card. However Person B doesn't necessarily win because it turns out that Person C and Person D each have 1 card as well. Person C makes the wrong guess so loses. Person D makes the correct guess. Now a tie-breaker ensues between B and D. In that sense, D and C have the right of reply against B because they have one more "turn" to exhaust.

I now post a full-sized photo of all the tins :)