An award-winning "story-telling" game.
For a creative, imaginative and perhaps, talkative, bunch of people.

Meaning: Apparently Dixit is Latin for some word relating to "speak"

Publisher:  Libellud (Amongst others)

Players: 3-6 (up to 12 if you make your own customisable voting method - see below under Dixit Odyssey)

Availability: Quite widely available online and at local hobby shops, but perhaps not in local department stores

Relatives: Once Upon a Time

EDIT (August 2014): From my understanding, if you are new to the series, the SQUARE BOX STANDALONE version of Dixit Odyssey (shown below) is supposedly the best version to get because it lets you play with 12 people (providing 12 really cool-looking voting tracks which operate by pegs). The rectangular version (above) is an expansion, adding components to Dixit "vanilla" for 6 more players. The square box standalone could be harder to find now as the version above seems to have been released with the intention of phasing out the square box standalone.

As many people have suggested though, you could create your own voting system if you just own the original Dixit and aren't willing to buy a new set. After all, Odyssey, Journey and the vanilla Dixit all have enough cards to supplement a game for 12 people - the only thing lacking from the vanilla version are enough voting tokens/components for 12 people.

If I could re-purchase Dixit, I would get the "square-box standalone" Dixit Odyssey before it goes out of print to spare me the trouble of making a new voting system. My sister Chloe has thought of a pretty ingenious method of voting that's designed for 12 people - perhaps I will make a separate entry discussing this later :)

Dixit is extremely easy to play and can be quite likeable with the right people. It's a game designed to forge existing friendships, in the sense that familiarity with your friends' personalities and interests is somewhat advantageous (kind of like Say Anything).

In this game everyone is given a unique set of pictures. Then, one person gives a clue that isn't too obvious, but not too hard either, relating to one of their pictures. The others then put in a picture which they think matches the clue. Then all pictures are shuffled and revealed and everyone except the clue-giver must try to guess which picture the clue-giver had. If the clue is too easy, and everyone picks the right picture, the clue giver will get no points; if the clue is too hard and no one picks the right picture, the clue-giver also gets no points (and the owners of those pictures that got selected will get points); the clue-giver only gets points if some, rather than all or none, of the players choose the clue-giver's picture. (See rules for further clarification)

The problem with this game though is that some of the pictures are too random, abstract or just difficult to give subtle clues about without being too obvious. Furthermore, people can ruin the game by simply chucking in a card that completely doesn't match the clue given so as to make it easier for the guessers. My group didn't quite like this game, but some people enjoyed it. I enjoyed it, but wished I was more creative enough to play this game better.

It works really well if you and your friends enjoy thinking of out-of-the-box methods of communicating or describing a picture, and seeing if others can deduce your clues. Inventiveness, familiarity with your friends and an understanding of how other people would interpret your clues is key, though I suppose each of these traits can be developed over a few plays with the same people.

The game starts to get dry though if people are feeling uncreative or are otherwise too lazy to think of a unique way of describing something. Also, there is some degree of luck involved: much of it will depend on what cards your friends have in their hands - if theirs don't suit the storyteller's clue, the storyteller's card can become quite obvious.

If you enjoy beautiful artwork and like the idea of giving vague descriptive clues about pictures (tricking some but enlightening others), whilst exercising your creative muscles, give this a shot.

Setup and Gameplay is simple. This is some of what you get in the box:

Each person receives as many voting tokens as there are players (so in a 5 player game, each player receives voting tokens of different colours 1 to 5).

6 cards are given to each player, the rest form a draw pile.

Just to give you an example, these are what the cards can look like: 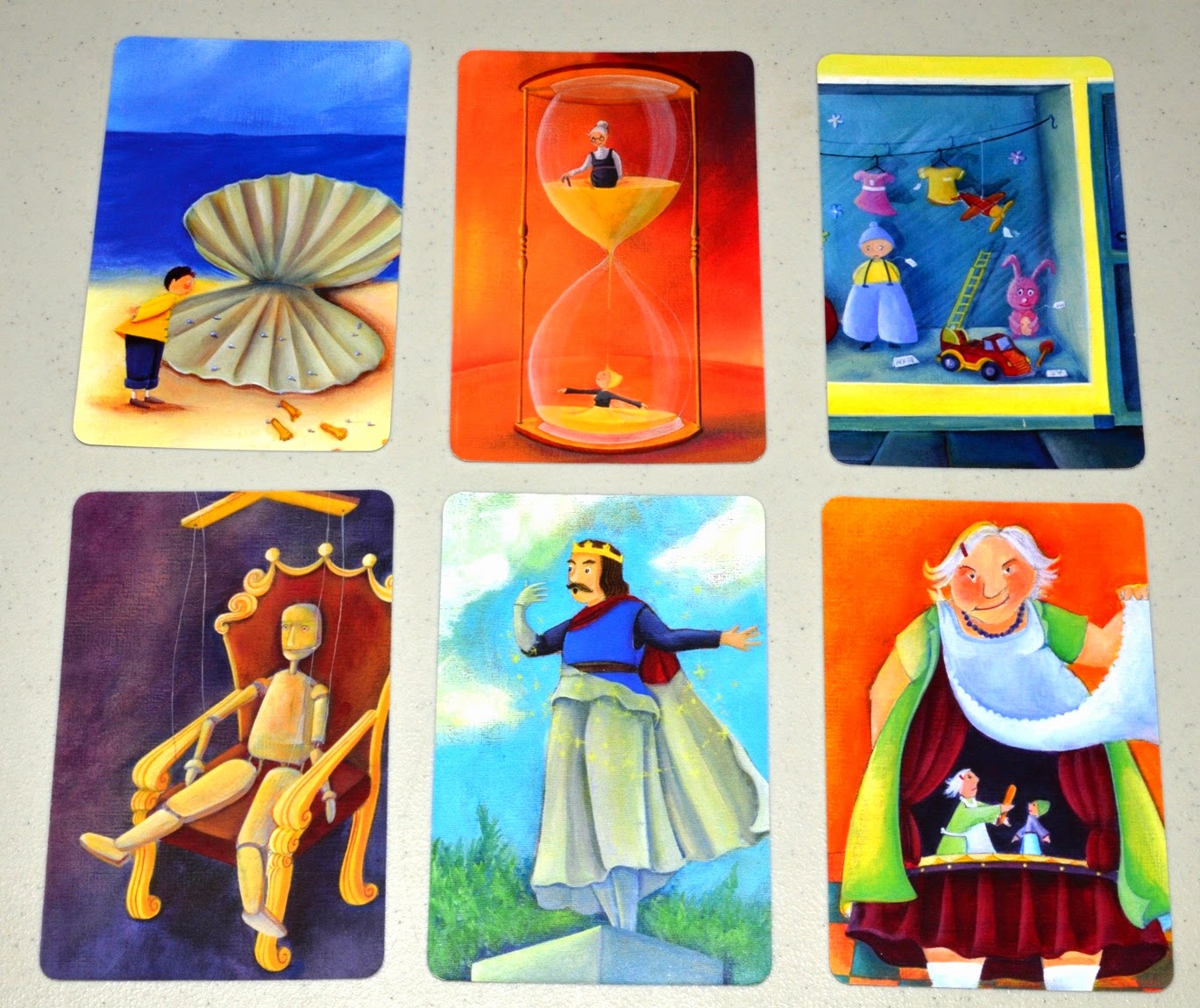 Everyone takes a turn to be the "storyteller" or "clue-giver" (the game calls this person "the active player"). When you are the story-teller, you give everyone a clue and you can make it as vague or obvious as you like (at your own risk).

Then all cards are collected, shuffled then revealed, and placed on the board (which numbers them from 1 to 5).

Each player then decides which picture was the clue-giver's card. They vote for which card they think belonged to the clue-giver by putting their votes face down.

The votes are revealed and assigned to each picture.

Hence the clue-giver wants, some, but not all people to guess their card.

Victory: Whoever reaches 30 points wins. Alternatively, if the last card of the draw pile is drawn, the player with the most points at the end of the game wins.

If the storyteller in a 5-player game chose this card and gave the clue "lonely": 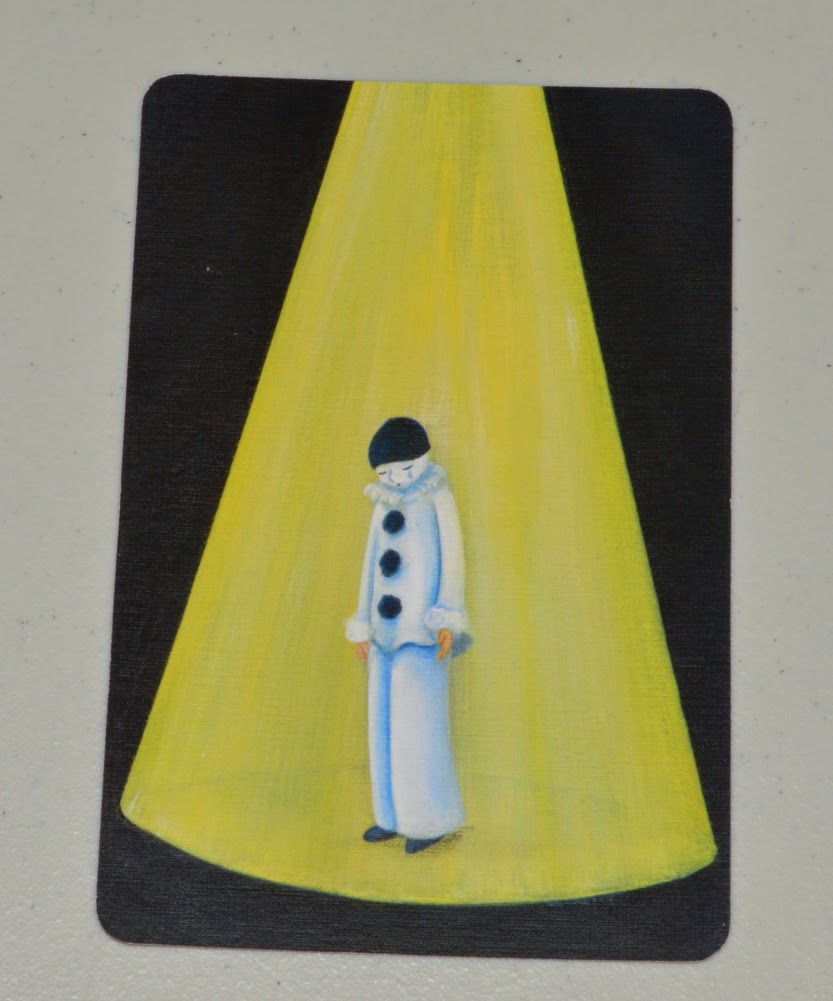 Then, the other four players put their cards face down. All cards are shuffled. Then they are revealed and ordered like so:


Then, each player tries to guess which picture the original storyteller/clue-giver had. They do this by placing their vote FACE-DOWN: 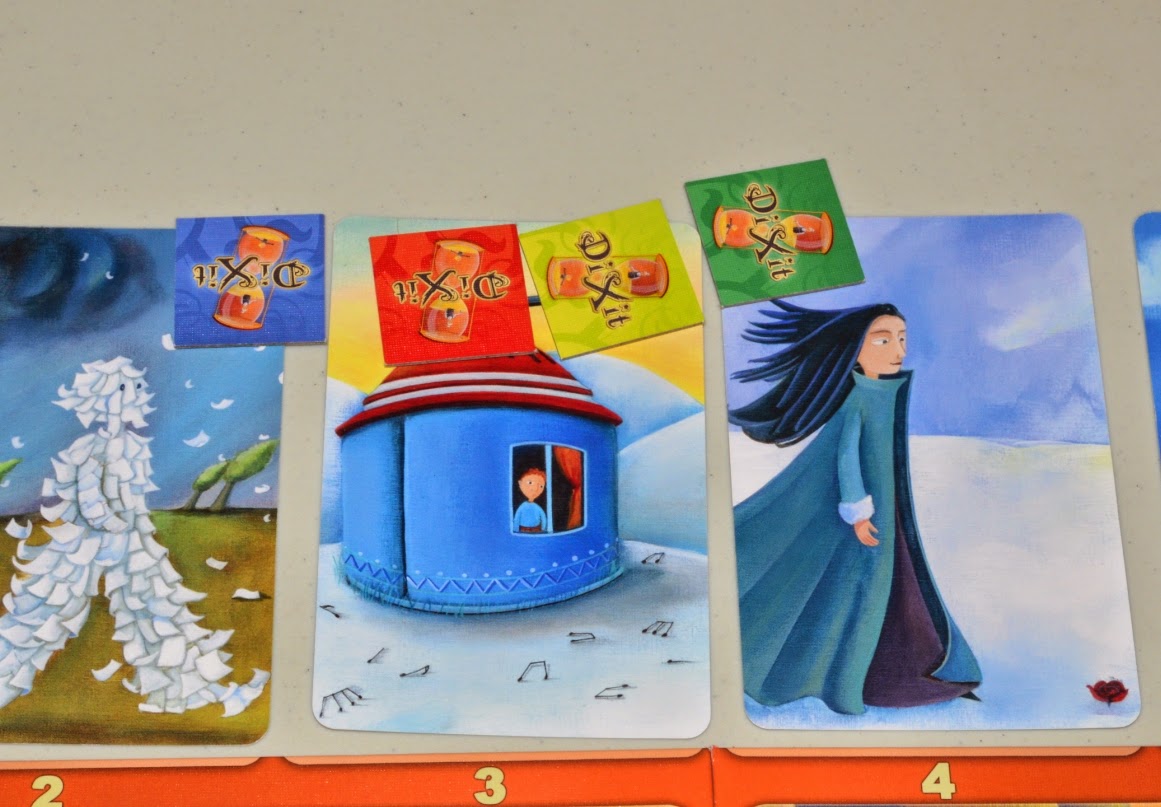 The votes are revealed and placed on the relevant numbered card:

Each player that placed down a card gets to draw a new card and now someone else is the storyteller.