The name certainly sounds interesting but this game is truly a sadistic solo adventure, designed only for the most patient and courageous. 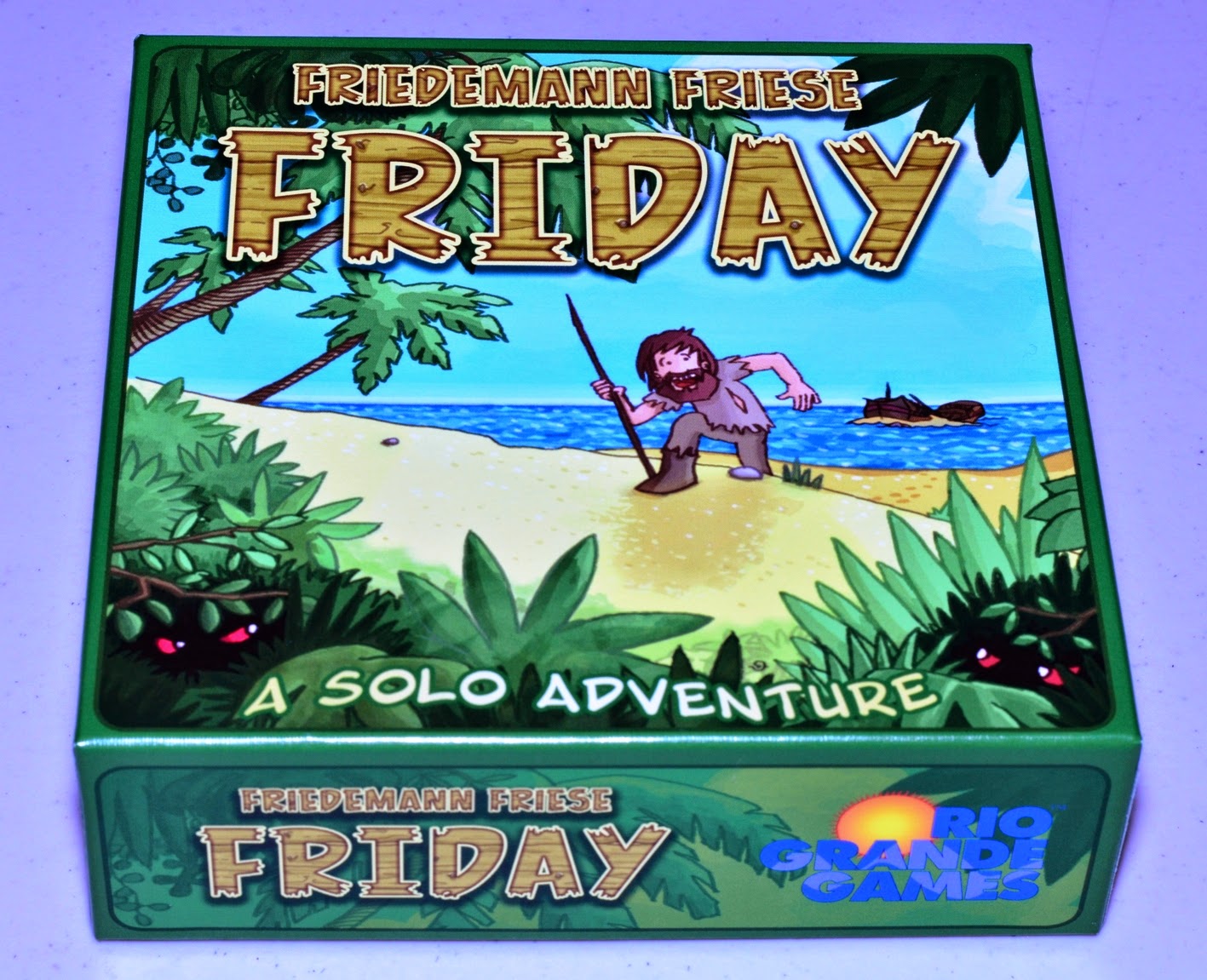 Publisher: Rio Grande Games (amongst many others)

Price Range (AUD):  $20 - $45 (including shipping); even the bottom end of the price range mentioned is quite overpriced.

Availability: Online but hard to find, especially one that posts to Australia

5.99 or thereabouts out of 10. (OK, passes as a game but, to be fair, will be fun for those who love, and are patient enough for, a good challenge -  See my Rating Scale)

This is a challenging and difficult solo game, though no where near as complicated as Mage Knight of course. However, the difficulty lies not with the complexity of rules and gameplay; rather most of it derives from the frustrating lack of control you have over gameplay. The game is named after the character Friday in the novel Robinson Crusoe, who is Crusoe's Carib servant. You play as Friday who has to teach Robinson Crusoe basic survival abilities against the hazards of the island that Crusoe is shipwrecked upon.

The first thing to note is that the game is quite sadistic and cruel, in the sense that there appears to be, at least from my own understanding of the game, a low chance of winning even for those who have played this game a few times. The game even has a diary entry for you to record your victories (indicating just how rare it is to achieve victory) and even asks you "How many games did you need for your first victory?". Being a solo game however, this is understandable - who would want a solo game that is easy to win? (But, on the other hand, who would play such a difficult game as this?!)

The key aspect of this game that makes it difficult is the fact that the hazards become exponentially more difficult to defeat. The game is divided into three phases (Green, Yellow and Red) and each phase steps up the difficulty considerably.

The player receives "bonus" cards with special abilities for defeating hazards. The key to the game appears to be collecting the powerful/more useful abilities in the earlier rounds (while they are easier to obtain, namely in the Green phase and, sometimes, in the Yellow phase). However even this is easier said than done because, even at the beginning, the player starts off with a few handicaps that are really designed to make this game challenging by nature. Drawing the right cards requires some amount of luck as well. Please do read the rules for more information.

There is of course strategy in this game that increases the chances of winning but I feel that this does not really mitigate the difficulty of the game (though admittedly, I am not the best strategist so this could be wrong) - it is all about obtaining the best cards and making your deck as efficient as possible to combat the hazards.

If you like challenges that seem impossible to win, and have some spare time to kill, try this.

You start off with 20 life points as represented below with these green wooden tokens, with an extra 2 in reserve (making for a total of 22).

As this is primarily a deck-builder, let me introduce you to the different types of cards available in the game.

Base cards (Your "fight deck"): You start off with these 18 cards that form your deck:


Hazard Cards: These cards form crux of the game as they are Crusoe's antagonists.

Eg. "Cannibals" below (presumably Crusoe is attacked by cannibals), which is the hardest card to defeat in the game.

Now, notice the bubble on the left hand corner? That tells you how many cards you can draw from your main player deck (or "fight deck" as the game calls it). If you go over this so-called bubble limit, you have to pay 1 life point for every extra card you draw over the limit.

See the numbers in the red, yellow and green circles? That is the target that you must reach to "win" against that respective hazard on each respective difficulty level, with green being the easiest and red the hardest.

So, for example, to defeat the Cannibals card on the Yellow level, the sum of Crusoe's 5 fight cards must be equal to or greater than 9. More on this later.

If you defeat a hazard card, you get a reward that gets placed directly into your fight deck. The reward is found by flipping the respective hazard card UPSIDE DOWN. Thus you can see that the harder the hazard is, the better the reward.

For example, the reward for Cannibals is a fight card called "weapon" worth a massive 4 fight points (which is amazing, given that you start off with so many "0" and "-1" cards). Other cards successfully obtained, like the wild animals card, give you other perks such as the ability to draw extra cards over the bubble limit.

This is what the game looks like when set up. 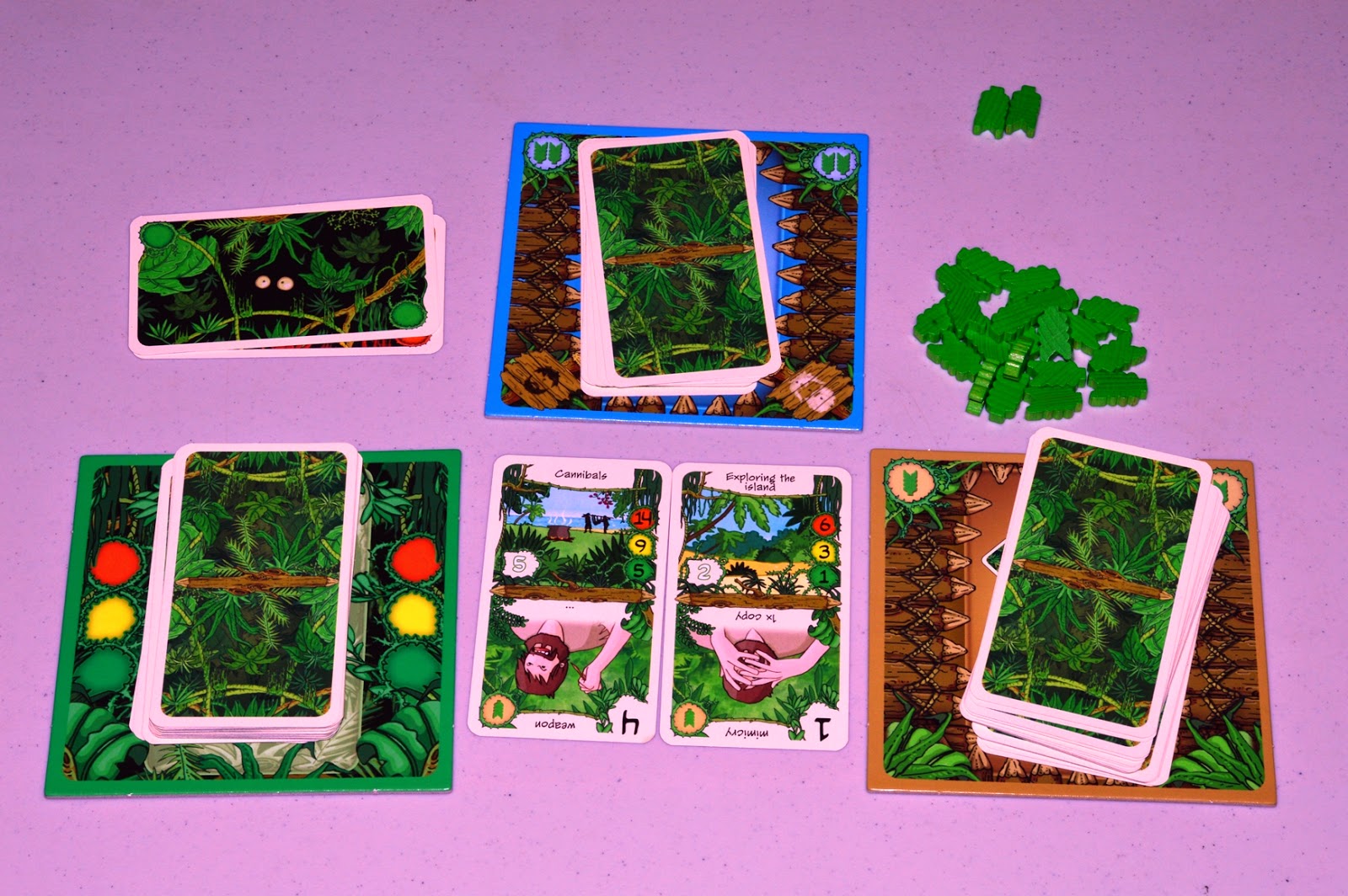 What happens now is that the player must flip over the first two hazard cards. They choose which one they want to tackle.

Then the player flips over one card at a time from their fight deck, and the number of cards permissible is dictated by the limit stated in the bubble.

As an example suppose the player chooses to fight Cannibals instead of "Exploring the Island" in the Green Phase. The card says you must reach a target of 5 points (Green number) with 5 cards of less (limit shown in the bubble on the left side)

If the player flips the first card and gets a zero, no progress has been made. 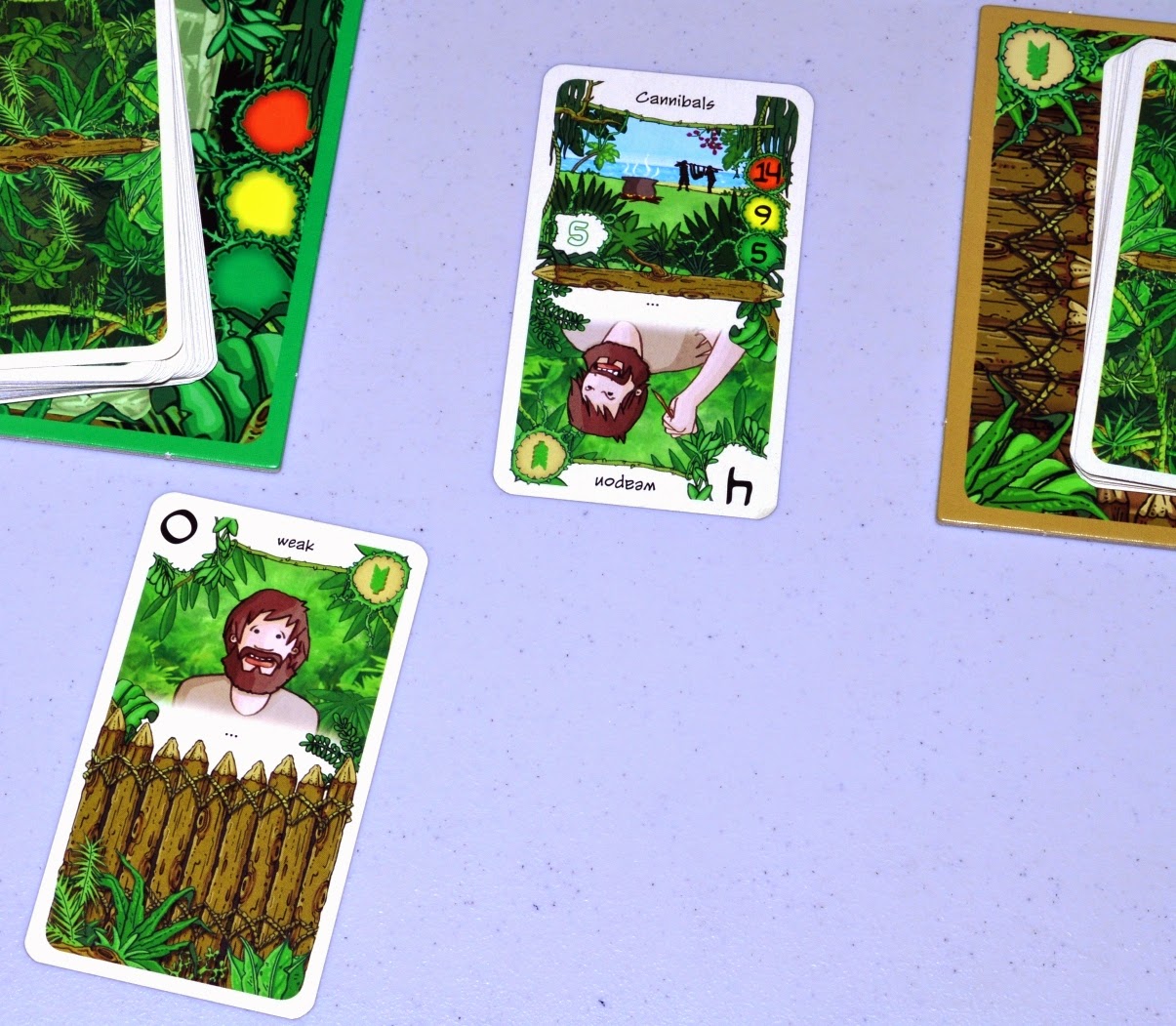 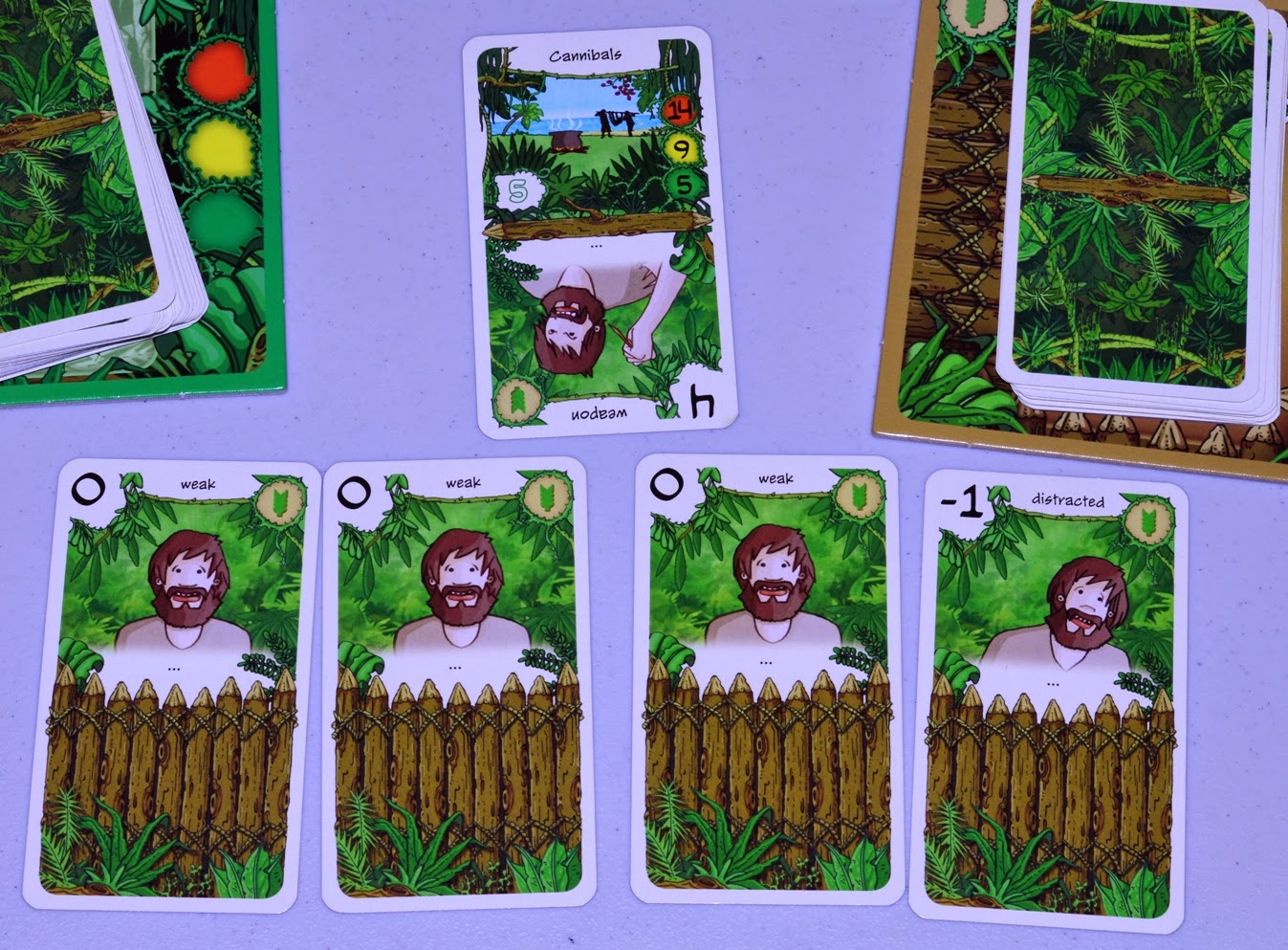 The player is no where near their goal and in fact further away because of the -1 card.

What can they do now?

Destroying cards: Now, an interesting aspect of this game is destroying cards. A player may destroy any flipped up card in their deck by paying the cost in the top-right hand corner of the card. For most cards, this is just 1 life point. For ageing cards, it is 2 life points (as they are nastier so you pay more to get rid of them)

For example, if I was tired of drawing 0's and -1's I would pay 4 life points to get rid of all of them like so:

If you reach zero life points, you don't lose but you are close to it. You lose if you lose 1 more life point after being on 0 points.

Losing battles against hazards: Another interesting aspect of this game is this: If you cannot meet the target indicated by the card, you must pay the difference between the target and the summed amount you have drawn on your fight cards (at any time you wish, which means before or when the bubble limit is reached). So for example, back to the above example, if I didn't pay to get rid of the cards, I would pay 5 - (-1) = 6 points to get rid of the Cannibals card, as the summed value of my fight deck cards is (0 + 0 + 0 + -1).

Thus, you can even pay to get rid of the hazard card from the outset by paying the face value of the target value. All failed hazards (ie. hazards you could not complete with your fight deck but by paying life points) are discarded.

Different phases and end of game:

When you have gone through all the hazards once (ie. all hazards are either in your deck as reward cards or discarded) you have completed a phase and must move to the next phase. The order of phases goes like this: Green, Yellow and Red.

This means that the discarded hazards are now shuffled and form a new draw pile for the hazard deck.

The game is now harder - the target values now increase based on the new colour of the phase you have entered.  Hence, after completing the Green phase, the target for "Cannibals" for the Yellow phase is now 9 rather than 5 (as it was in the green phase).

The game ends when ALL 3 phases are completed AND after that, the pirates are defeated!!

Two pirates are drawn from a pirate deck and each has to be fought in the order of the player's choice.

If you have even made it to the Red phase of the game, I applaud you. There are other "harder difficulty levels" that the game offers, but this is quite frankly too ridiculous and is only for the most adventurous/persevering of gamers. 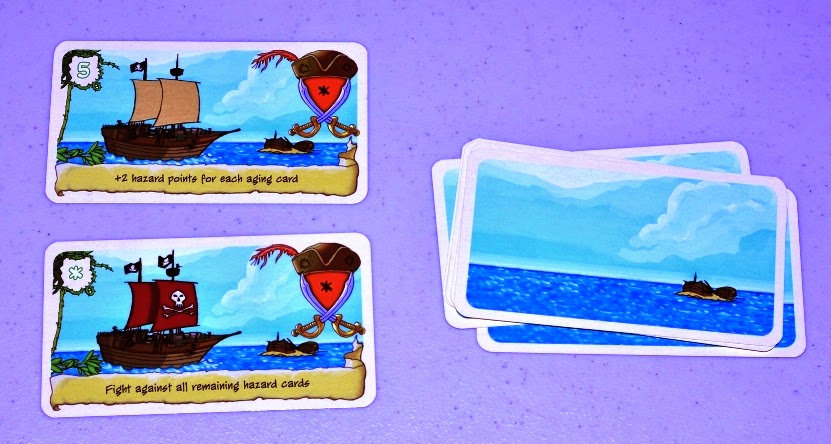