Not many games replicate a live waterfall, let alone the fury of Niagara Falls!
This is a gem of a game because of its thematic emphasis and beautiful colour.

In our gaming group it appears to be Roy's favourite game*

*October 2014: Roy tells me that, whilst Niagara is good, his favourite game has now changed to Coup.

Availability:  Available online, but probably not in local stores. Might even be hard to find in board game stores

7.3* out of 10. (Good, fantastic replication of a real geographical place which creates a nice thematic feel - See my Rating Scale)

This game is a lively and interesting family game. Even when we ignore the beautiful artwork and components, the gameplay, whilst simple and a bit artificial, has much substance.

Daring adventurers try to obtain as many gems as possible by navigating the river that leads to Niagara Falls. However there's a catch: if they are too greedy and try to get too many gems, they may get caught up in the river and fall off the waterfall. Stealing is also a fun and important part of this game - it forces players to think carefully about their moves and to plan countermeasures against potential thieves.

I also enjoy the multiple victory conditions. For example, obtaining 1 of each colour of gem is no easy feat as pink and blue gems are incredibly risky to obtain (being so close to the water's edge - and even if you can make it upstream, no doubt, someone will steal them off you!!). One effective way to win the game is to let other people do the work for you whilst you sit back and wait for an opportunity to steal their bounty. It may be easier to opt for taking 4 gems of a kind, but usually if your friends are competitive enough, this is impossible to execute as there are only 8 gems of each colour.

The only downside to this game is that it can take a very long time to finish. Stealing usually stops someone from winning but also prolongs the game for a considerable period of time. Gameplay is may also seem rather repetitive, as turn after turn players secretly bid what they will do and execute that move. However, it is the act of guessing and predicting what other people will do that adds to the suspense of this game (of course, this is a feature of most games, but it is particularly important here as it directly affects whether your canoe will be stolen from or thrown off the game board).

*August 2014: Reduced from 7.9+. Still a good game; my primary reason for reducing this score is because there probably isn't a whole lot of depth to this game - a lot of it is predicated on "luck" in the sense that you truly are at the mercy of what other people do. If you can guess what people will do, good for you; but this isn't so much explained by strategy as it is by random chance. Additionally, this game can drag on for a bit because of all the unintentional stealing that goes on (in the sense that you may find yourself in a favourable position to steal, depending on turn order and what others have played). I admire the theme and family feel of this game which give it the bulk of its marks. It still isn't quite up there though with a modern classic like Ticket to Ride.

September 2014: Another reason why this game doesn't belong in the fantastic category is because it has too many rules that aren't exactly intuitive. It is confusing and hard to remember for the average player. It's a bit surprising that this won the German Game of the Year award - but hey, Europeans must enjoy their board games a lot better and thus must like more complication to their rules. For example, it can be very confusing for new players to remember the rules regarding loading/unloading canoes with gems and moving canoes. However, most of its relatively high marks comes from its fantastic theme. Gameplay is a bit clunky but it makes for a good game.

If you enjoy a game that puts a lot of emphasis on artwork and theme (and, as a bonus, if you are a fan of geography/landmarks/Niagara Falls) perhaps give this a go.

If you open the box you will see this:


The game box is actually important because they are just the right size to place the board over as follows:


Weather track and icons on board:

What the game board looks like from the side:

Everyone gets 7 Tiles (numbers 1 to 6 and a tile with a cloud symbol) which will be used over the course of 7 "rounds".

On each round, players place 1 tile FACE DOWN. Then when everyone is ready, all tiles are simultaneously revealed. Once this tile is used for that round, it can't be used any more until after the 7th round. After the 7th round, everyone gets their tiles back. This repeats until someone meets a victory condition.

Hence only one tile can be used per round, and it is wise to think about what number you will place down because you won't be able to play it again until after everyone runs out of tiles (in which case, everyone gets their tiles back).

The aim of the game is to return to shore any with one of these 3 winning conditions:

Movement of canoe(s)
Numbers on a tile you placed down indicate the number of movements your canoe(s) can make.

Movement points can be used to pick up gems or to move canoes a number of spaces along the stream. 1 movement point lets you move 1 space over a circular disc.

The number of canoes you can move depends on the following:

Picking up or unloading gems: Gems can be picked up or unloaded at the cost of 2 movement points. Gems can be unloaded onto a pile of gems that is of a different colour. You cannot unload a canoe that has just been loaded in the same turn.

(Thus for 4 movement points, you can unload a gem of one colour to get a gem of a different colour, provided that you didn’t just load that canoe on that very turn.)

To do this you don’t need to use the exact number of movement points - you can have excess movement points. The canoe that has just been moved back to land (with or without the gem) cannot be used again until the next turn. It is placed on the beach. A gem in a canoe that makes it back to the beach belongs to the owner of that canoe.

The lowest number played by any player of that round PLUS the number on the weather track dictates the number of circular discs that the river will move.

If these tiles are put face down at the start of the game in the first round..
and then revealed..

The lowest number of the Round is 2 which means that, the River will move 2 + 1 circular discs down (as Yellow moved the cloud icon to +1)

Players can steal gems only if they move upstream. To do this, the player must land on the same disc as another player's full/loaded canoe (ie the canoe must have a gem in it).

As an example, suppose this is the scenario. Green has an opportunity to steal from red by going back upstream (to the right) 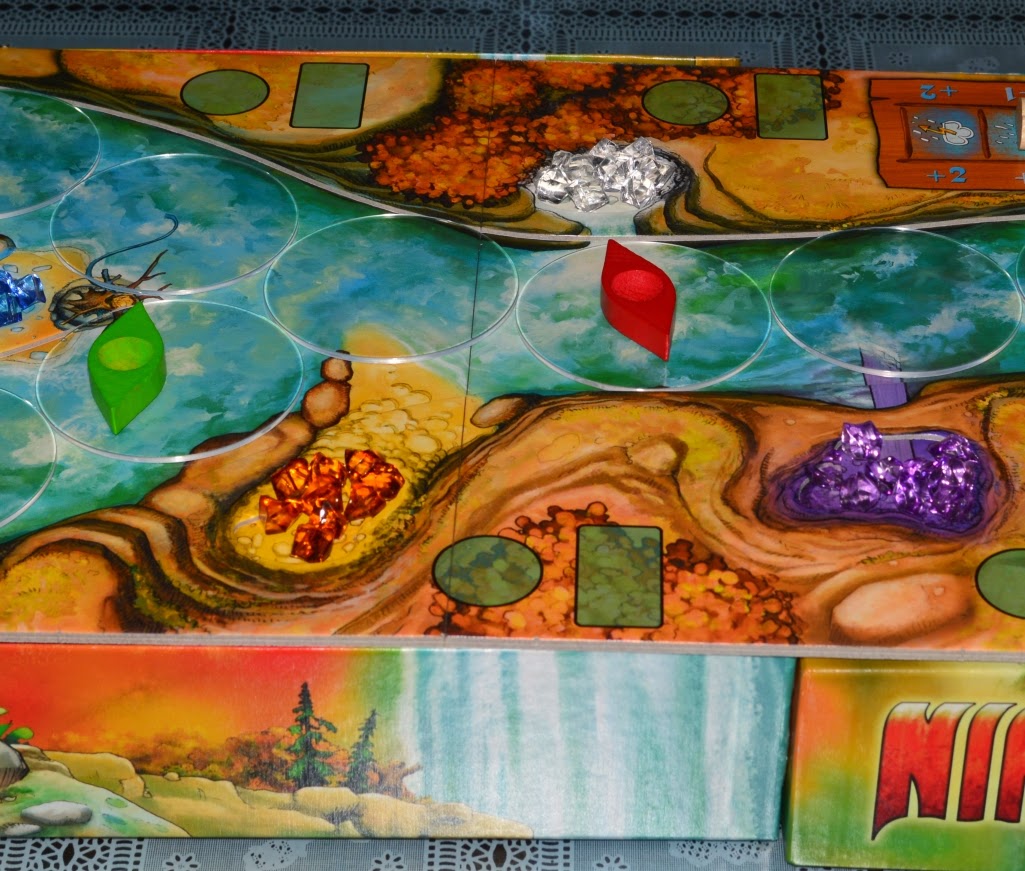 Suppose Red must move first. Green can plan the steal by predicting what Red will do and play the right tile accordingly.

In a silly move, Red uses its 3 movement points by taking a White gem (remember, this costs 2 movement points) and then uses the last point to move upstream by one space, like so: 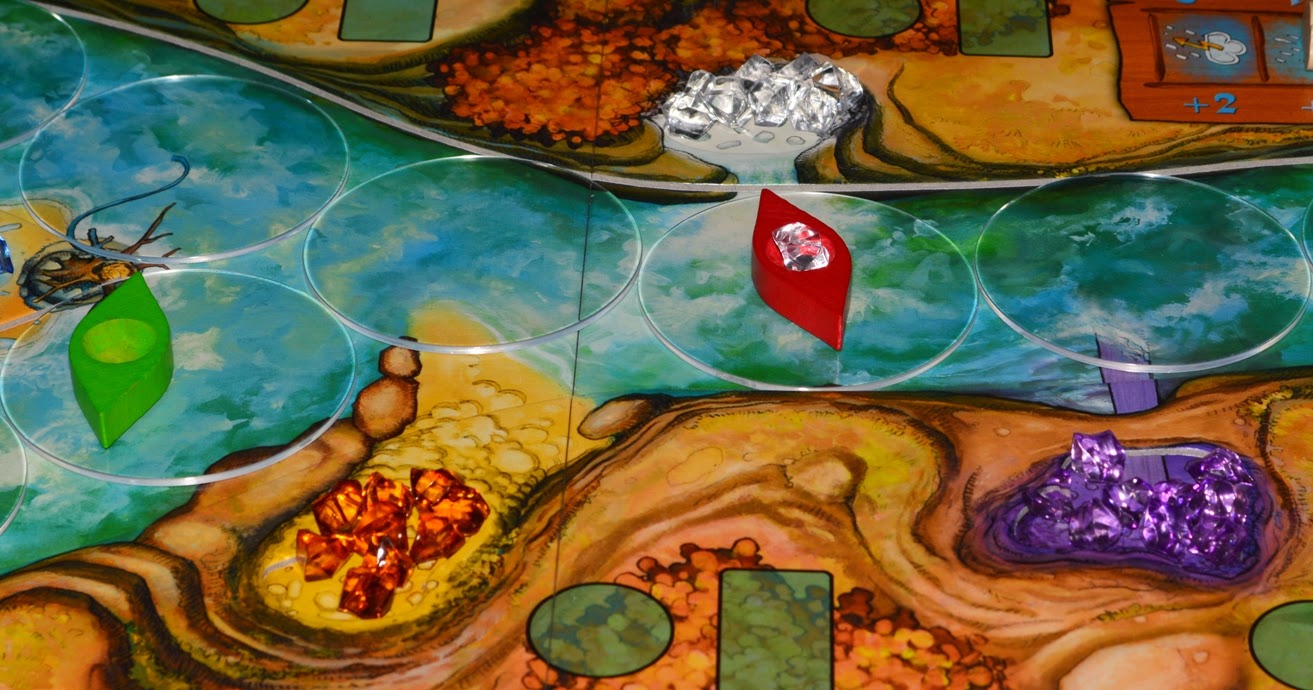 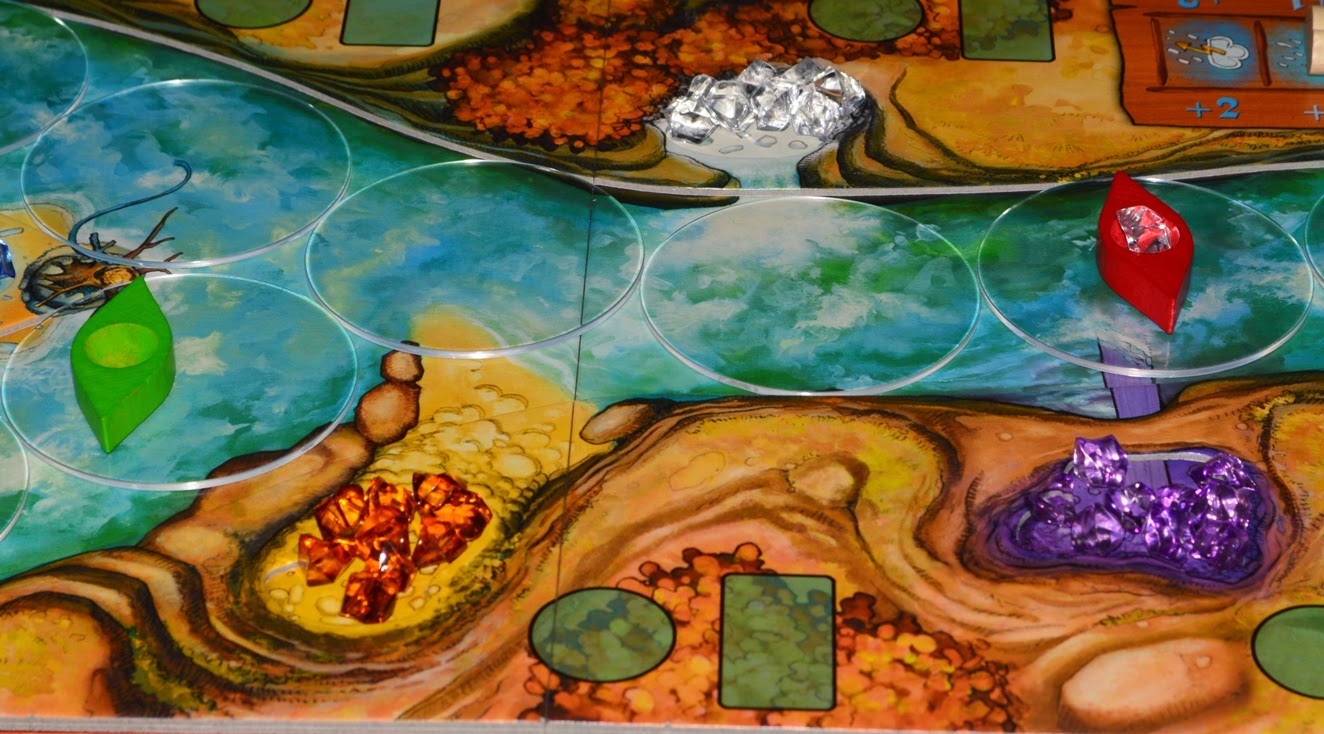 Then Green uses up their movement points to move upstream like so. Because Green ends up on the same disc as Red, Green can opt to steal! 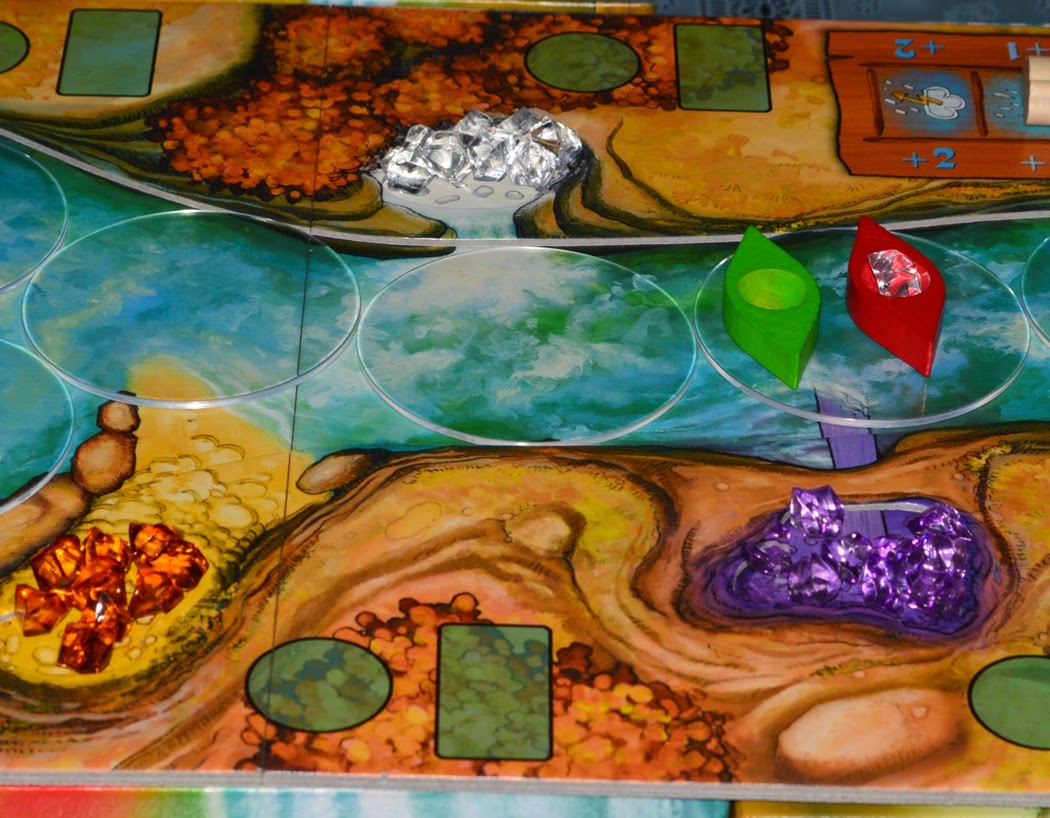 A player can steal from their own boats as well.

Canoes that fall down: A canoe that gets kicked off the waterfall is lost permanently but may be restored if the player pays 1 gem.