World Cup "Observations" 15: Predictions and Comments on the Knockout Stages 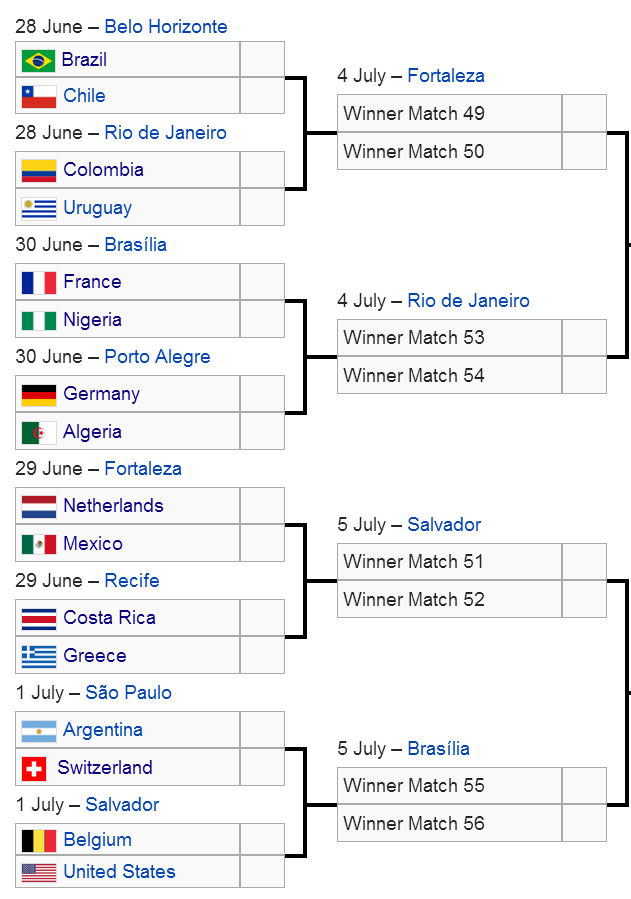 My first comment is that, in terms of predictions, it seems to me that most matches here, perhaps with the exception of Germany-Algeria (and if I'm allowed to stretch it, Argentina-Switzerland), should be fairly competitive.

My second comment is that, the bookmakers are generally correct and, purely as an indication of probabilities of winning, one wouldn't (and shouldn't) venture too far away from their odds: the top most name in the fixture is usually the favourite. This is also intuitive, given the relative strength of each country and how they fared in the Group Stages.

Thus, due to this second point, my predictions will be rather obvious but even then I propose to talk and share my thoughts about each fixture separately.

At the outset though, I will highlight that the Costa Rica v Greece matchup has the bookmakers most uncertain; whilst Belgium v United States could also be quite interesting.

I now divide the draw into a Top-Half and a Bottom-Half, and each Half is in turn divided into "Quarters".

Possibly the more "standard" half in the tournament; arguably the chances of an upset here are less probable. 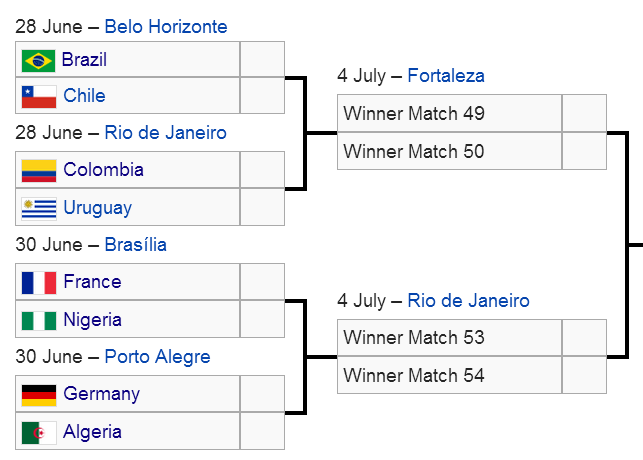 This Quarter Bracket, with the exception of Argentina of course, will see who is the best out of all the South Americans. Winner is quite likely to play France/Germany in the semi-finals.

Second Quarter Bracket: Standard Round of 16

This Quarter Bracket sees the seeds expected to win in what is a "properly seeded" contest, but it doesn't mean that the matches will be easy.

As alluded to above, two to three of the fixtures here may have a possible upset on the cards.

As mentioned in a previous post, this Quarter Bracket sees 4 non-World Cup winners play off for one Semi-Final berth. It's the one I'm most looking forward to. All the teams here, except perhaps Mexico (though they would probably still be happy), will be happy about this draw as it is comparatively easy.

In this quarter we have nothing that I can really give a name to - there is one seemingly standard match and the other is a potential upset.

As alluded to above, most of my tips are for the favourite so I have obviously not said anything special or insightful. That being said, with the exception of the Netherlands, I would be happy if I got all my tips wrong as that would make for a very unusual and interesting World Cup.

Of course, I highly doubt that will happen.
Posted by Andre Lim at 14:46