A rather crazy, senseless and absurd game that has a tendency to cause laughter and frantic panic.

Publisher: Zoch Verlag (This, along with Geistesblitz, is an example of why they are my favourite publisher)

Availability: A bit niche and kind of rare but can be found online.

This is a simplistic but crazy (fun) game. The gameplay and turn order could be slightly improved but I always have a good laugh when playing it.

Whoever gets there first must squeeze the banana before the other player does to receive points (yes, that's right, the banana).

The frustration, tension and humour as each player tries to roll their desired combination (before the other does) is pretty funny and exciting.

*July and September 2014: Revised down from 8.1. When I first reviewed this game I gave it an 8.1. This was dreadfully misconceived. I have since changed my mind; it's theoretically a good game but its main and critical drawback is its "spectator effect". Everyone else watching the madness unfold as two people roll may be funny at first but this humour can only last for so long. It isn't an entirely replayable game. But it has its moments and can be funny with the right group. Just not necessarily fun with every group and every single time.

The best part of this game is watching people roll blanks as they desperately try to roll their desired dice combination. You should give this game a shot if you like pushing your luck with dice but in a frenzied environment.

This is how the game board is usually set up

A banana is placed in the middle between the above two people.

Now, the person holding the Yellow Matcho Dice has to try to roll THREE Monkey heads (each yellow dice has 2 monkey heads, on opposing sides)

The dice-rolling is pretty much based off the game Yahtzee (similar to King of Tokyo and Dice Town except with unlimited rolls).

HOWEVER, once you are happy with what you have you must SQUEEZE THE BANANA before your opponent squeezes it.

Whoever (correctly) squeezes the banana first gets all the points and the other player gets nothing.

So to give you an example:

If this is Green's first roll 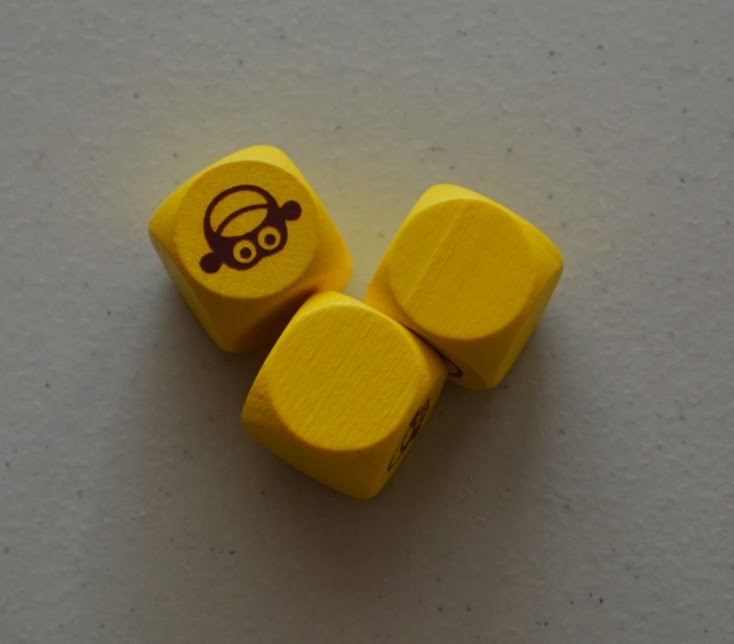 They can choose to keep one of the monkey heads like so and roll the rest: 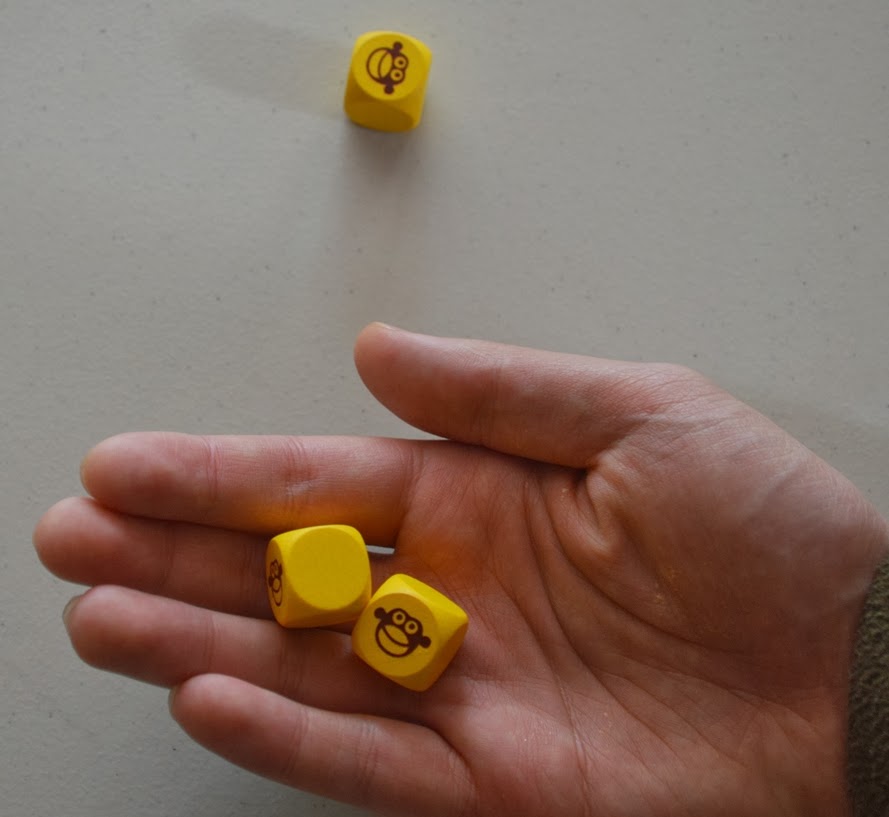 If this is what Green got on their second roll...

They can choose to keep the other monkey head and roll the last dice. 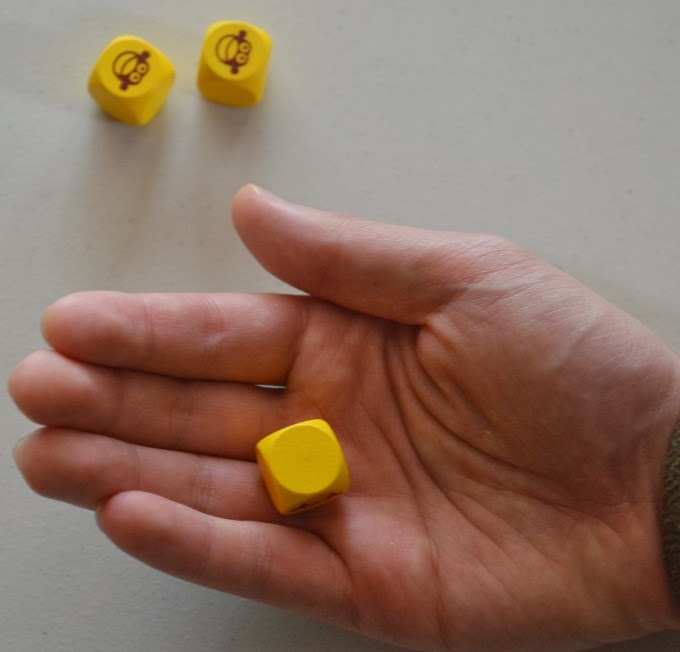 Once three monkey heads are rolled (and this can take a while!) the player must then SQUEEZE THE BANANA before the other player does! If Green squeezes the banana first, they get one point (and importantly this stops Blue from getting high-scoring points) 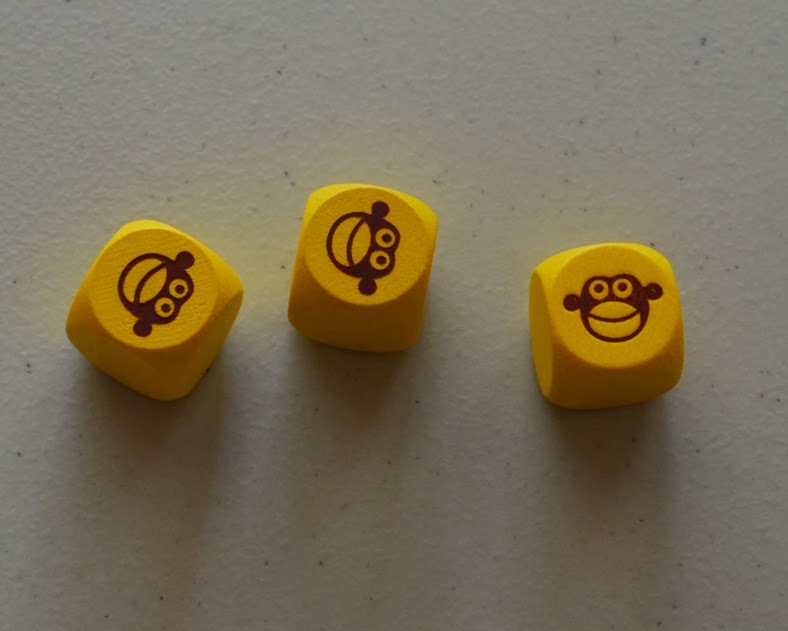 If this was Blue's first roll: 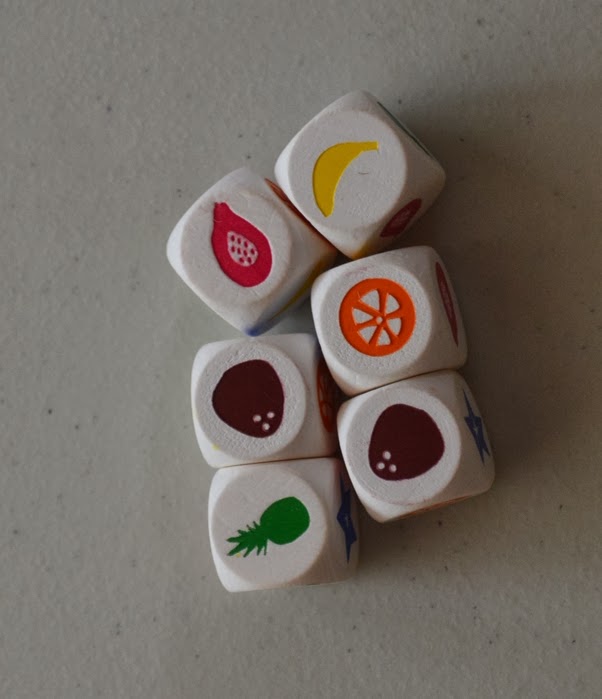 Blue could keep the two coconuts and roll the rest like so: 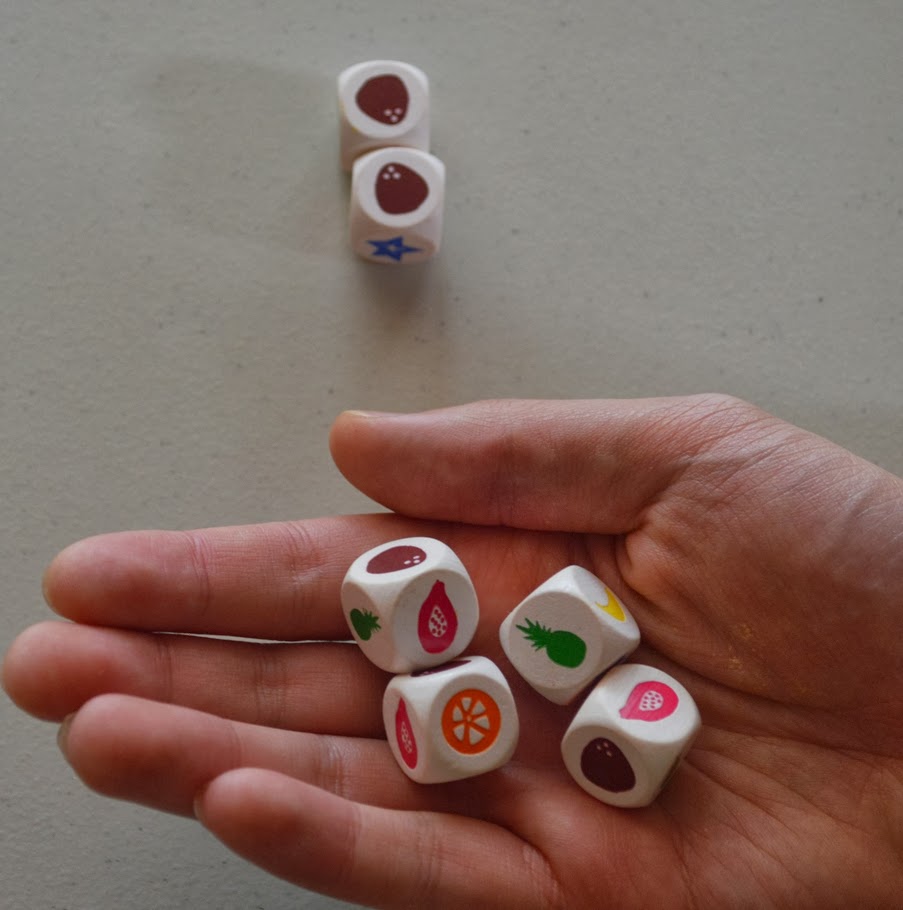 On Blue's second roll they get this result:

Blue can then choose to keep everything except for the banana. 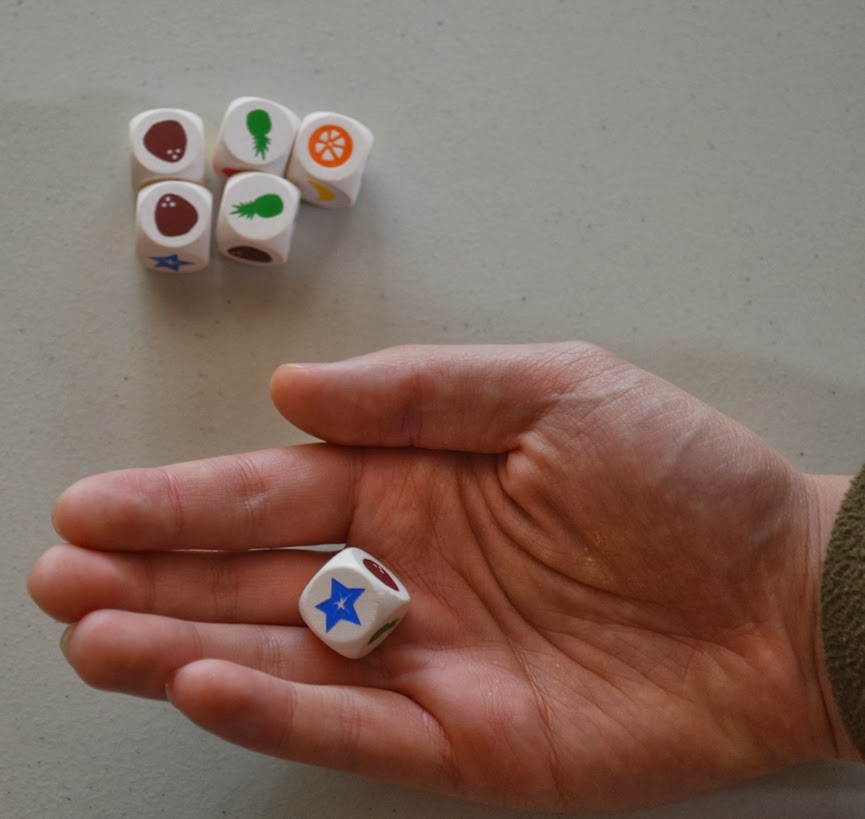 Blue will keep rolling the last dice until Blue gets another orange fruit - hence achieving 3 lots of 2 pairs which = 5 points. 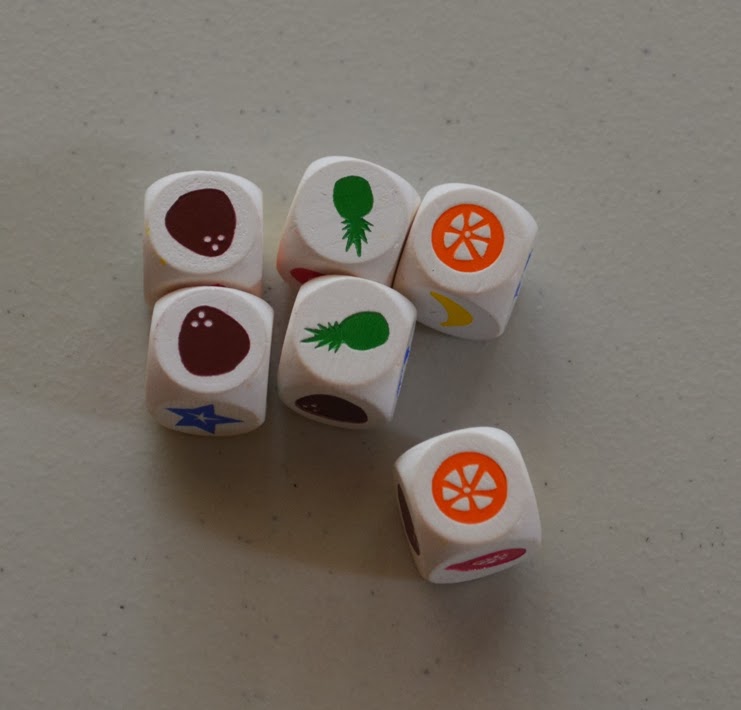 Then, assuming Blue squeezed the banana BEFORE Green squeezed it (because Green was too slow and did not get 3 monkeys) Blue will move up the board 5 points and Green will get zero points as bbelow.

(Note that the 3rd player, Yellow, is a spectator) 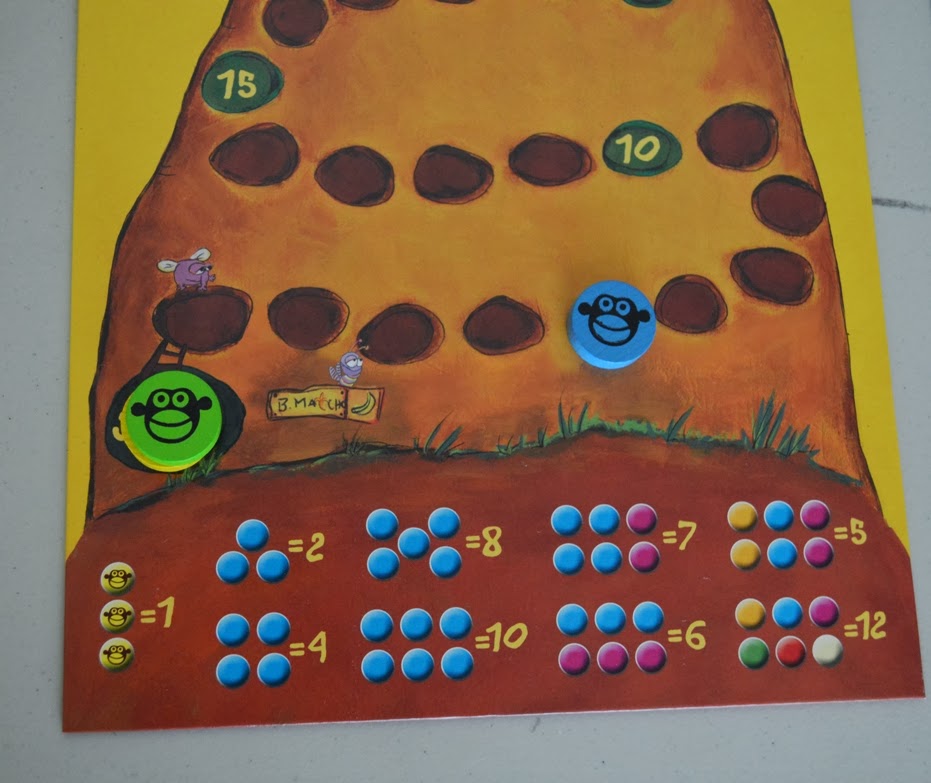 The Dice are then passed clock-wise or whichever way you want (so long as this is consistent throughout the game - or maybe you could have your own custom rules).

This continues until someone reaches 30 points!