My friend Nimo told me that he had heard that "this game was good" - heeding his advice, I bought the game and the rest is history.

Prepare for an epic Kaiju (怪獣, kaijū) showdown in Japan. 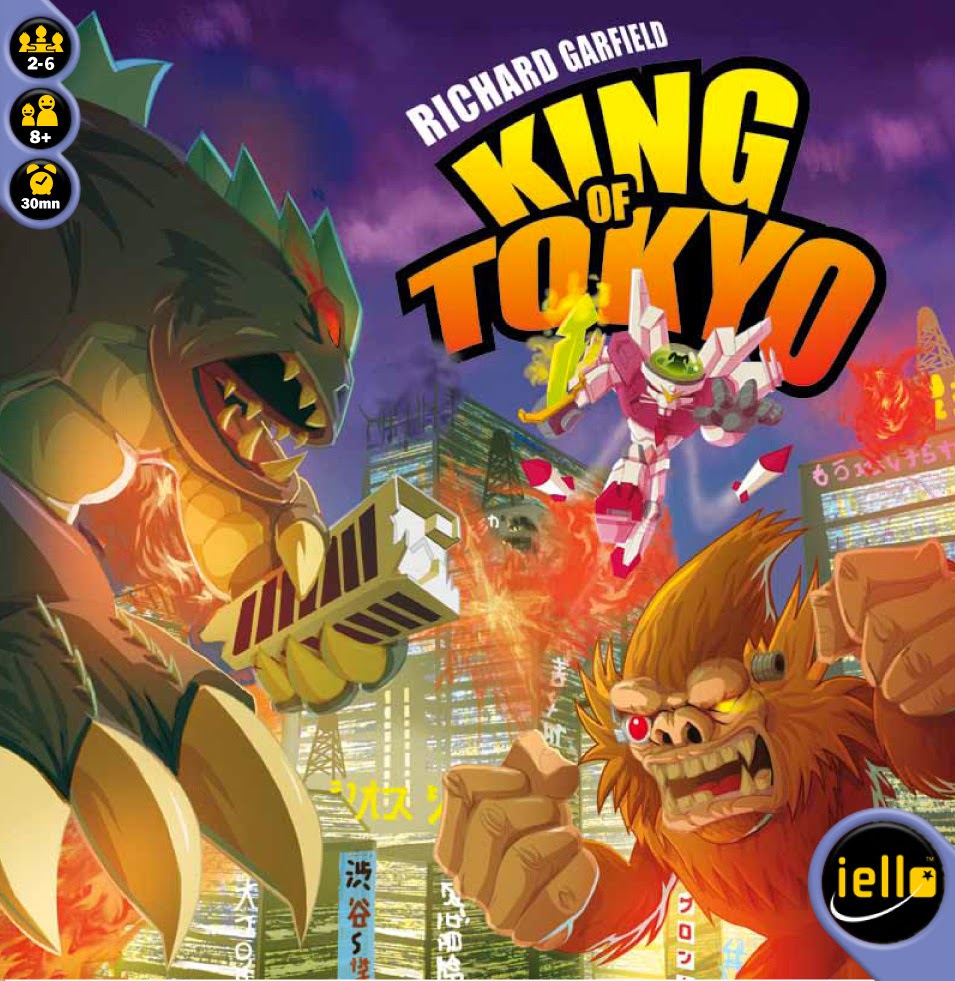 Players: 2 to 6. The Power Up! Expansion allows for an extra player. There is also a Halloween expansion that adds two extra players. But you wouldn't exactly want there to be too many players, as the game would take a LONG time to finish.

Time to play: Box says 30+ minutes, but it can take longer.

Is it reasonably priced? Not exactly, I think $30-$35 would have been more reasonable but that's an unrealistic price.

Availability: Quite widely available. Can be found online.

This is quite a good (but frankly not great) game with a mix of mild strategy and dice-rolling. I think it makes for a cool family game and can be thought of as a party game but not everyone will like it because of the long time between turns, the action involved and the factor of player elimination.

Players basically choose a Japanese monster and aim to be the last one standing OR the first monster to score 20 Victory points. Each of the victory methods has its own strategy. The former is obviously moe aggressive and risky (as you may be the subject of attacks too); whilst the latter will take a longer period of time but is more controlled and steady.

There are various powers and upgrades that can be purchased - but to earn "income" you must roll the right symbols on the dice. The dice are ued for everything - scoring points, attacking other players, healing or earning income (energy cubes) to buy upgrades.

The real downside of this game is the time it takes between turns and the player elimination. People can take a long time on their turn and when they choose to make decisions. This aspect of the game I feel is not very fun and creates what I would call a "spectator effect" where only 1 person is essentially playing. See Banana Matcho and La Boca for different examples of this effect.

*July, August 2014 and January 2015: Revised down from 7.8 after consideration - the player elimination and long time between turns bothers me, especially when playing this game with the maximum number of people. Don't get me wrong: it still is a rather good game but the game just doesn't quite make it to "great" when played with lots of people.

The game gives you plenty of options for dice rolling and is fun if you're the sort of person who likes taking people on in direct confrontations and building up your character. 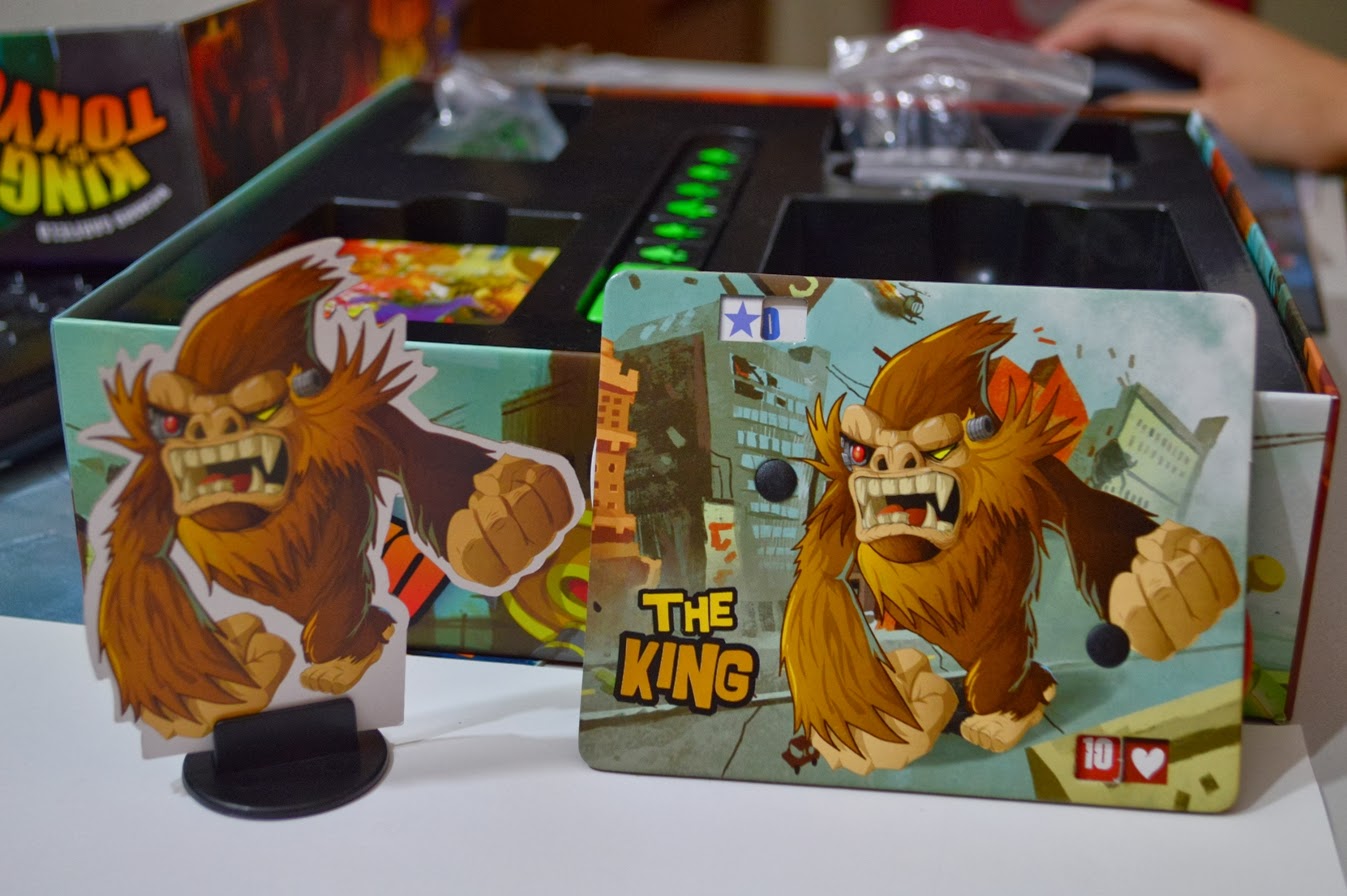 The first player to EITHER kill all other monsters (reduce their life points to 0) OR reach 20 Stars wins.

On your turn, you are given 6 dice, and here are all the possible symbols.

Rules regarding Numbers: Triples are required to score points of "numbered" sides

For example, in the above situation, if this is your final roll, you will score 3 points for having triple 3. The double 2's are not enough to score points and the single 1 also will not help you score points.

So if you rolled a triple 2, you would get 2 points. Triple 1 gives you 1 point.

For every additional three on top of your triple, you score 1 extra point. So if this above was your final roll, you would score 3 + 1 = 4 points. Of course you would also get 1 Energy and be able to attack for 1 damage.

Rules regarding Lightning Bolts: Lightning bolts give you energy cubes

Just to give you an idea, energy cubes look like this: 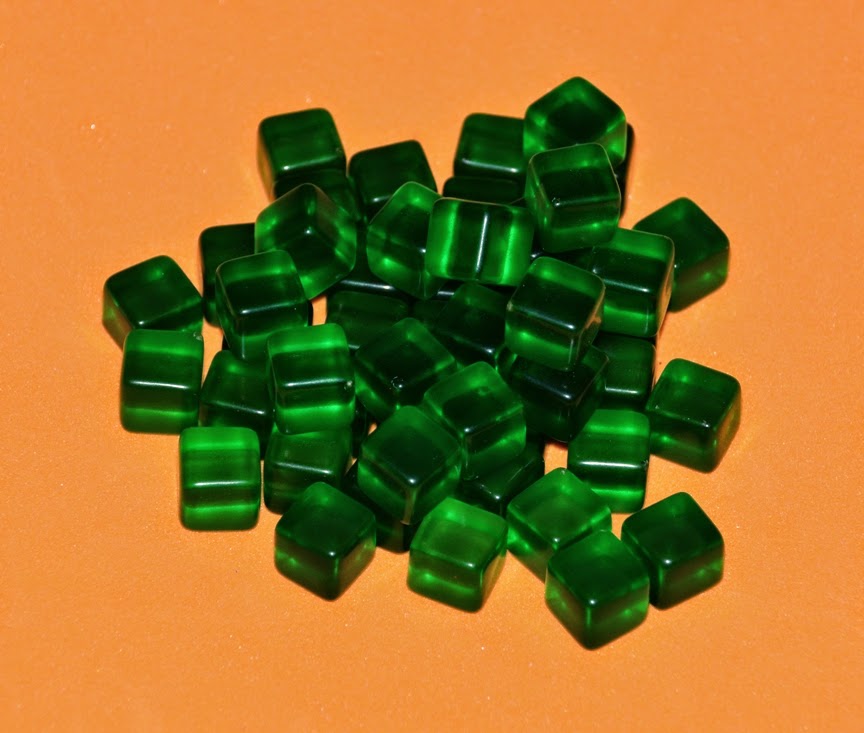 At the end of your turn you can buy something from the shop if you have enough energy cubes. 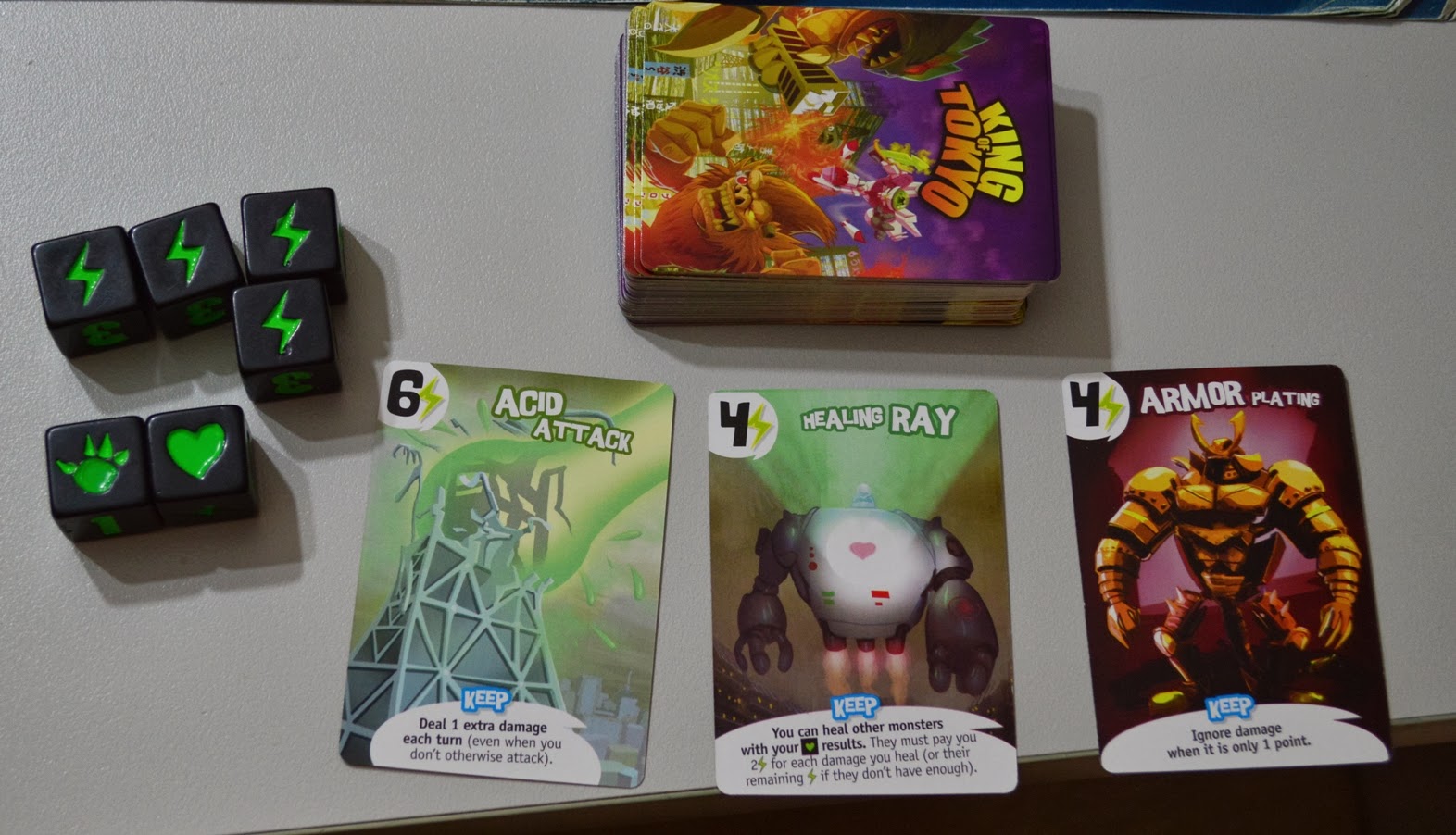 If this was my final roll I would receive 4 energy cubes.

So in this example above, at the end of my turn I can buy something from the shop that costs 4 lightning (the cost of purchasing each card is stated on the top left corner of each card). I can't buy Acid Attack as that costs 6 energy. I can buy Healing Ray or Armour Plating though.

When you buy a card, a new one is drawn such that only 3 cards are ever visible on the table. I believe you can buy as many cards as you want.

You can pay two energy cubes to refresh all 3 cards and draw new ones. 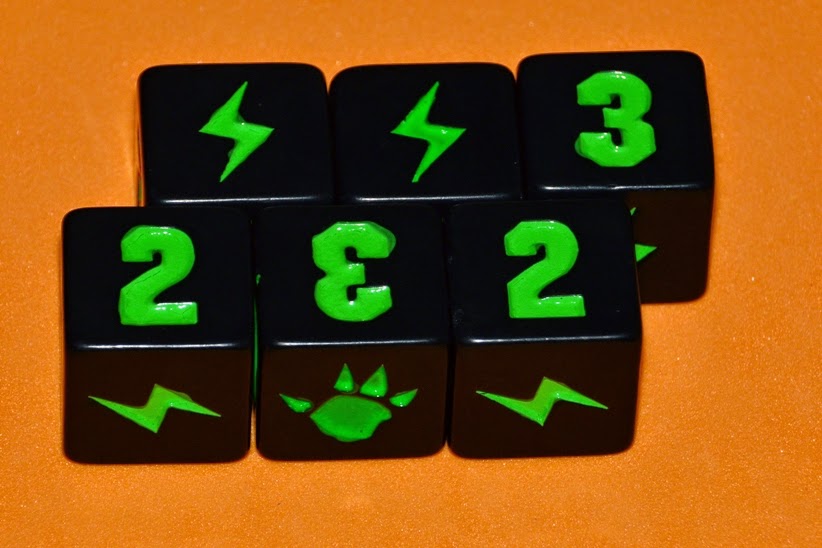 If the above was my first roll... 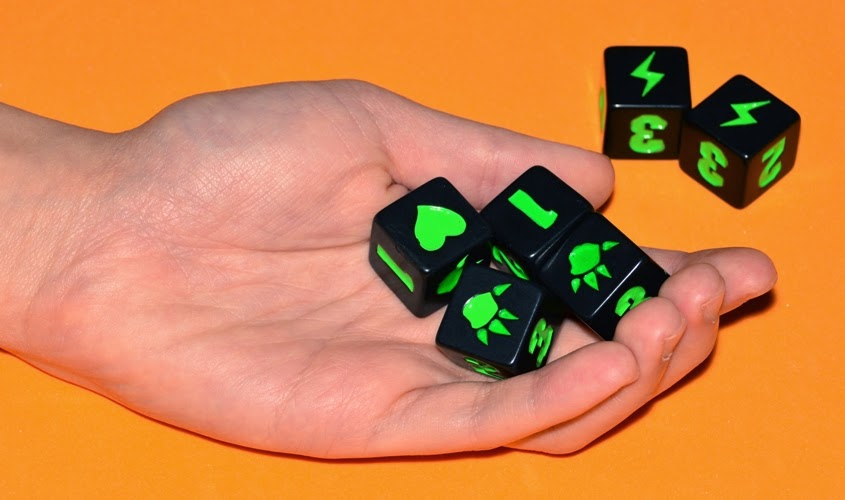 Here, I chose to keep the two lightning and re-rolled the other 4 dice.

This was the result of my second roll. I got 3 lightnings and a pair of 2's and a lone 3.

I won't show the last roll, but that's essentially the rules on rolling.

The game also comes with these two opposite coloured dice which are used if a card gives you the ability to roll more dice, such as Extra Head (cost: 7 energy cubes) 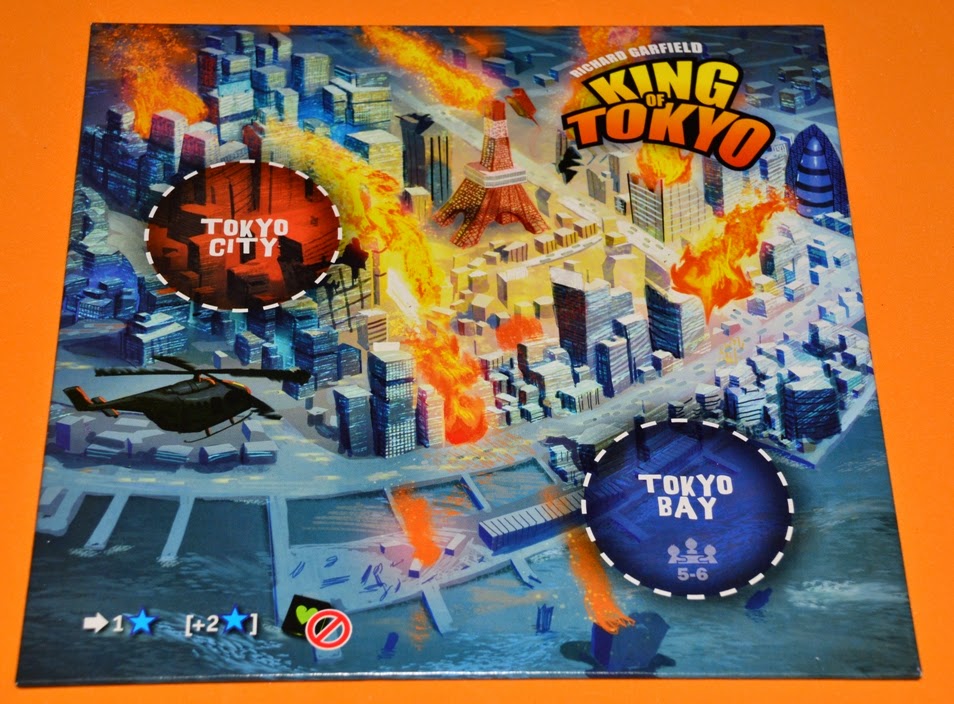 At the beginning of the game, no one is in Tokyo.

Entering Tokyo has these advantages:

But being in Tokyo has disadvantages:
So the only way you can be attacked if you are outside Tokyo is if the person currently inside Tokyo attacks.

You can choose to leave Tokyo only if someone attacks you.