Yet another brilliant game set in the Wild West (I am thinking of the game Bang!, which I might cover later)

Players: 2 to 5 but an expansion allows for a 6th player. Best with 4+. Okay with 3 players, but rather strange with 2.

That being said, the components are quite good (you get plastic "bullet" cups and lots of dice - see my "Rules and Components" section below to get a better idea). But it is still on the pricey side.

The competitive (and rather mad) rush as each player quickly attempts to accrue certain dice symbols to perform particular actions makes for a great gaming experience, particularly in an old west setting. All players receive 5 dice. Each dice symbol represents a certain action, and the aim is to accrue the most of a particular type (See Rules for a better overview of the game). For example, if you have the most Green Queens, you get to perform the steal action. Rolling the most Red Kings lets you become the sheriff and you get to decide tiebreakers.

However, there are certain twists and turns in this game. For example, it is actually the best poker hand that nets the most points; doing so rewards you with property cards that actually give you a lot of points. Furthermore, you also get a pretty powerful reward if you deliberately choose (or aim) to not win anything (eg. securing your property cards so that no one can steal them!).

There is also a certain excitement and unpredictability to this game as each person (almost) blindly "bids" their dice to obtain a reward of their choice. Some strategic depth exists as well as it pays to keep a close eye on what your opponents are doing.

This is one of my favourite dice games and I would highly recommend it to most people. See the Rules for more information.

*June and August 2014: Revised down from 8.65. Initially I revised this down to 8.55 on the grounds that I just couldn't, on principle, give this a higher or equal score to Tichu. However, upon further reflections, I have problems with giving Dice Town a rating of 8 and above; whilst it's a fantastic game, that little bit of chaos and unaccountability that goes on (especially when it comes to rolling dice and paying cash to re-roll - everything just happens too quickly for you to keep track of what is going on), for me, dampens the light of this game. If you trust everyone to know what they are doing, then this probably isn't a problem for you. Furthermore, some actions in the game don't seem to be that powerful if you play often enough. In a conservative group for example, being Sheriff doesn't really hold that much water (especially since people are unlikely to pay lots of money just to resolve a tiebreaker in their favour, when the prize is relatively insignificant); the same could arguably also be said for the "robbing the bank" action when people don't bother paying too much for re-rolling die. However this is likely to vary depending on who you play it with. An important quality of a game is its accessibility to all types of people and groups. This almost fits the bill. I think games like Las Vegas and Say Anything are significantly better and do meet this requirement.

If you like rolling dice and the idea of "secretly" (kind of, anyway) bidding for certain items and trying to anticipate what other people are going to bid for, then this is a good game for you.


Each player receives a cup and 5 "poker" dice as shown below.
The aim of the game is to get as many Victory Points as possible. 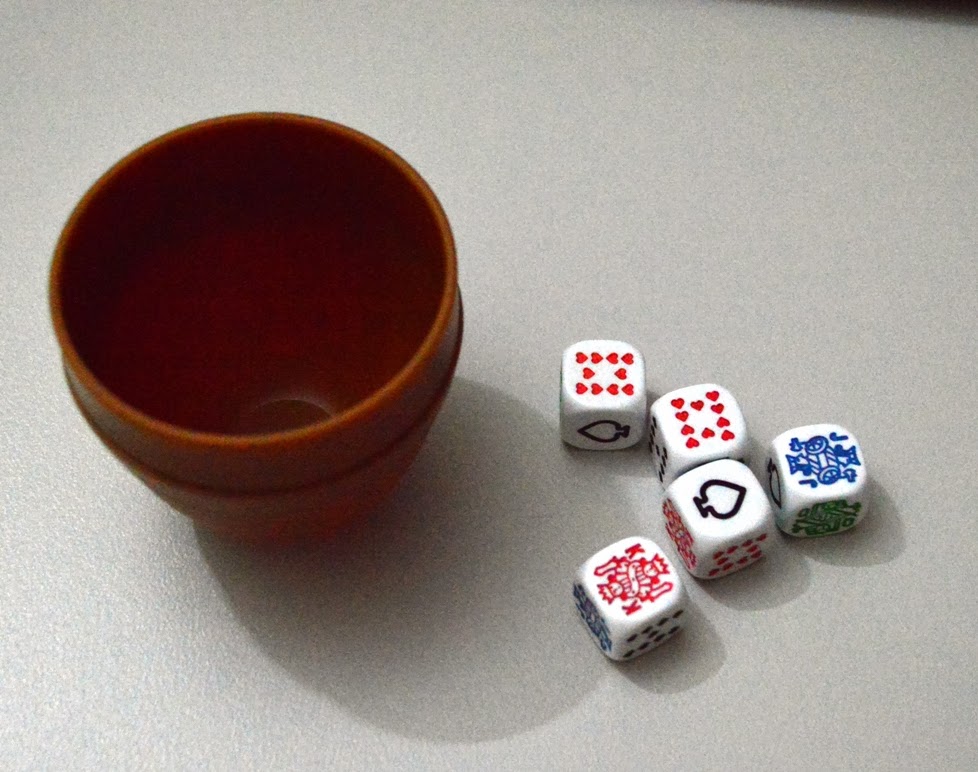 (I explain the dice symbols and the actions associated with the symbols here first; I explain dice rolling later)

There are 6 symbols on each dice, and each symbol correlates to a certain part of the board.

I have to now show you how these symbols interact with the game board.

There is a lot going on here so let me split the board in half.

As you can see, the dice symbols are imprinted on the board.
This game is all about majorities.

Whoever rolls the MOST....: 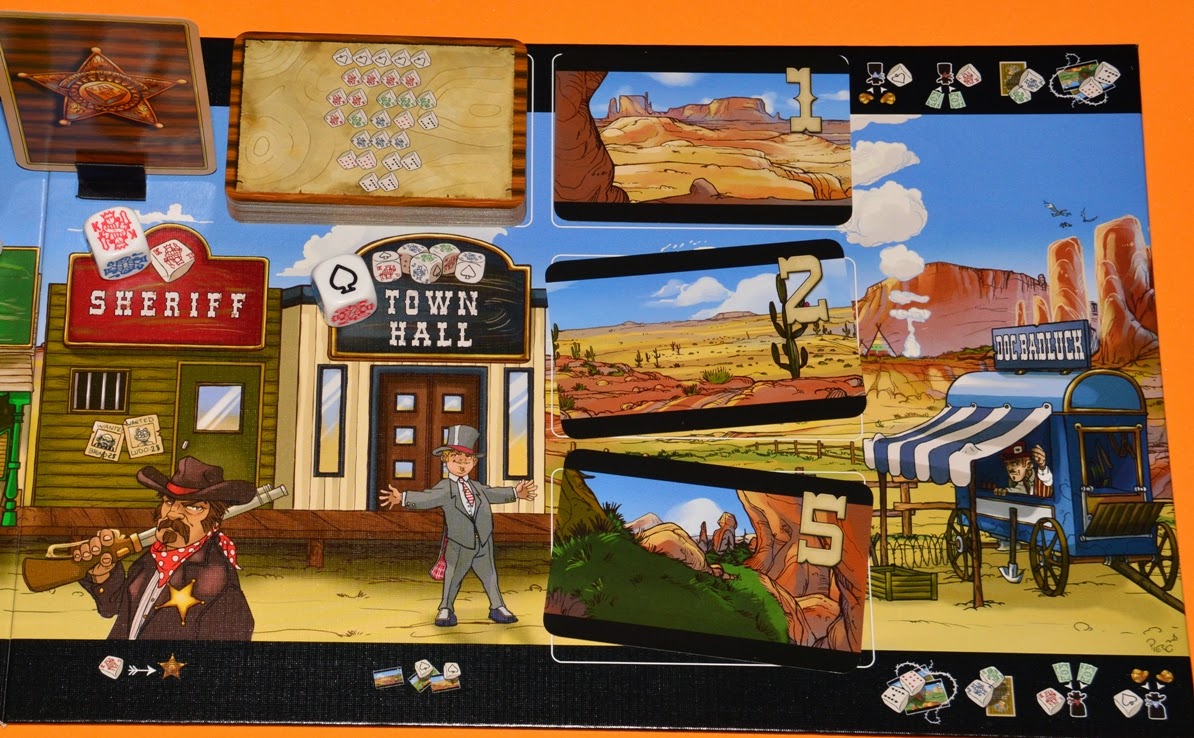 The game ends when all Property Cards are taken or if all Gold Nuggets are taken.

Winner is the one who has the most Victory Points.

How to roll dice

Everyone gets unlimited rolls but you must adhere to certain rules.

First, roll your dice in your cup by putting all dice in your hand and shaking the cup over your hand. You then "slam" the cup on the table/carpet and peek underneath.

Now, after each roll you may ALWAYS choose to KEEP 1 (and ONLY 1) dice here for FREE.

You may also RE-ROLL THE WHOLE THING if you aren't happy with your roll but you must pay $1. 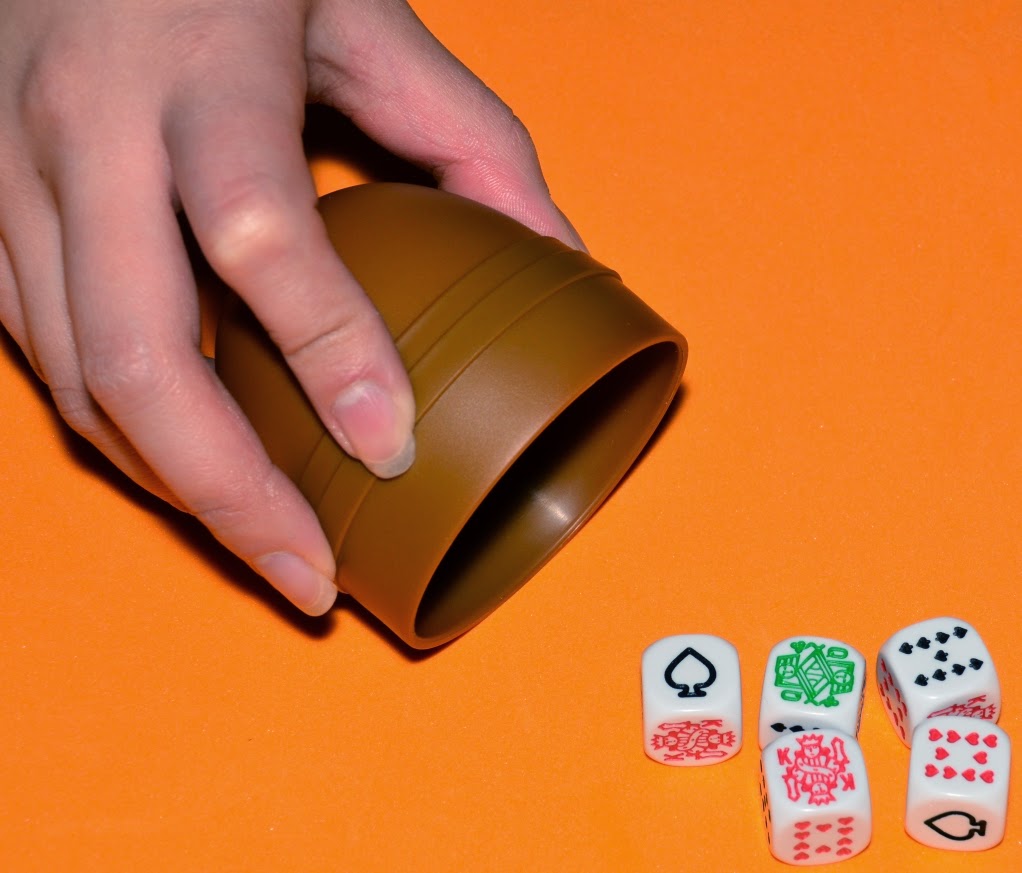 Let's say I choose to keep the 9 above. I can leave it aside like this for FREE (placing it to the right): 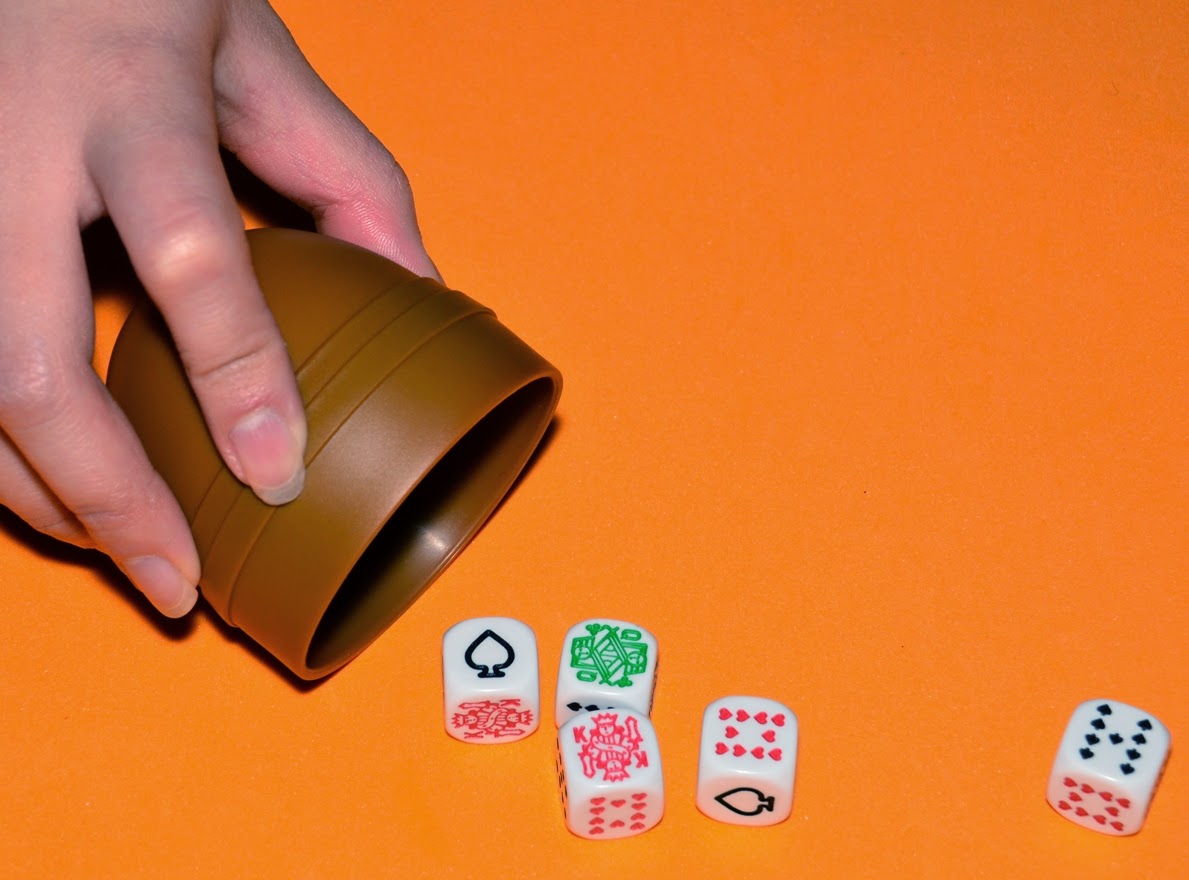 I can now re-roll the remaining 4 dice in my cup. Let's say on my second roll I get three 9's and a Queen.

Now, as stated before, after this roll I can take the first 9 out for free as follows: 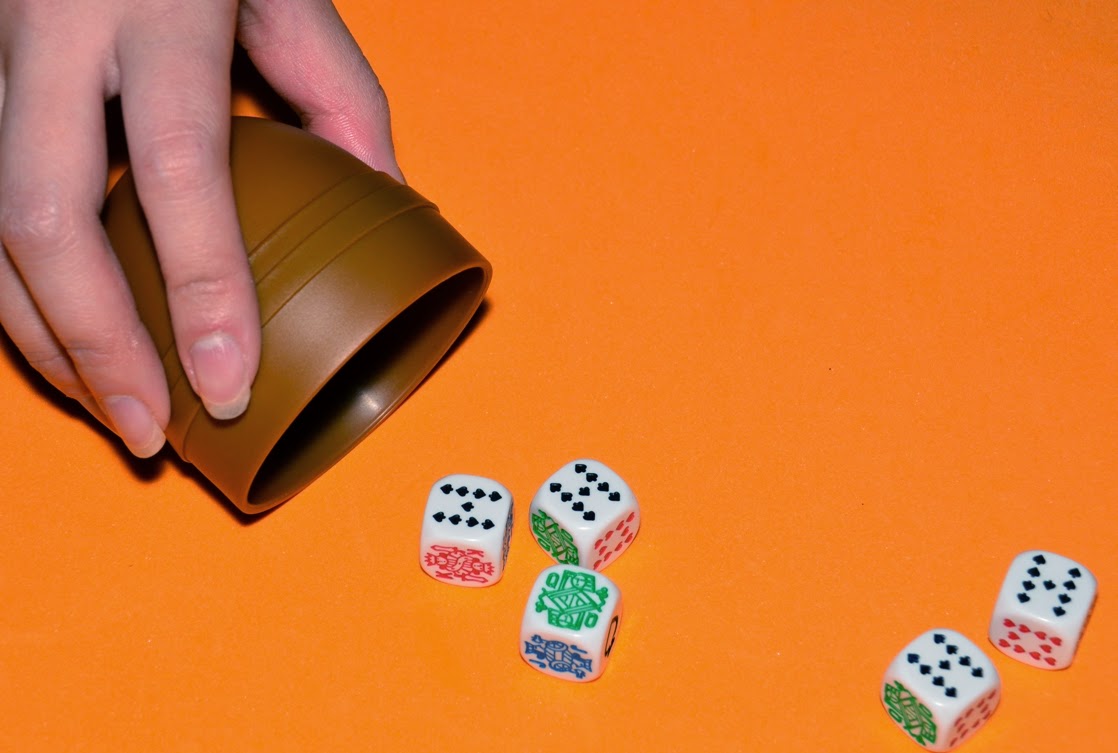 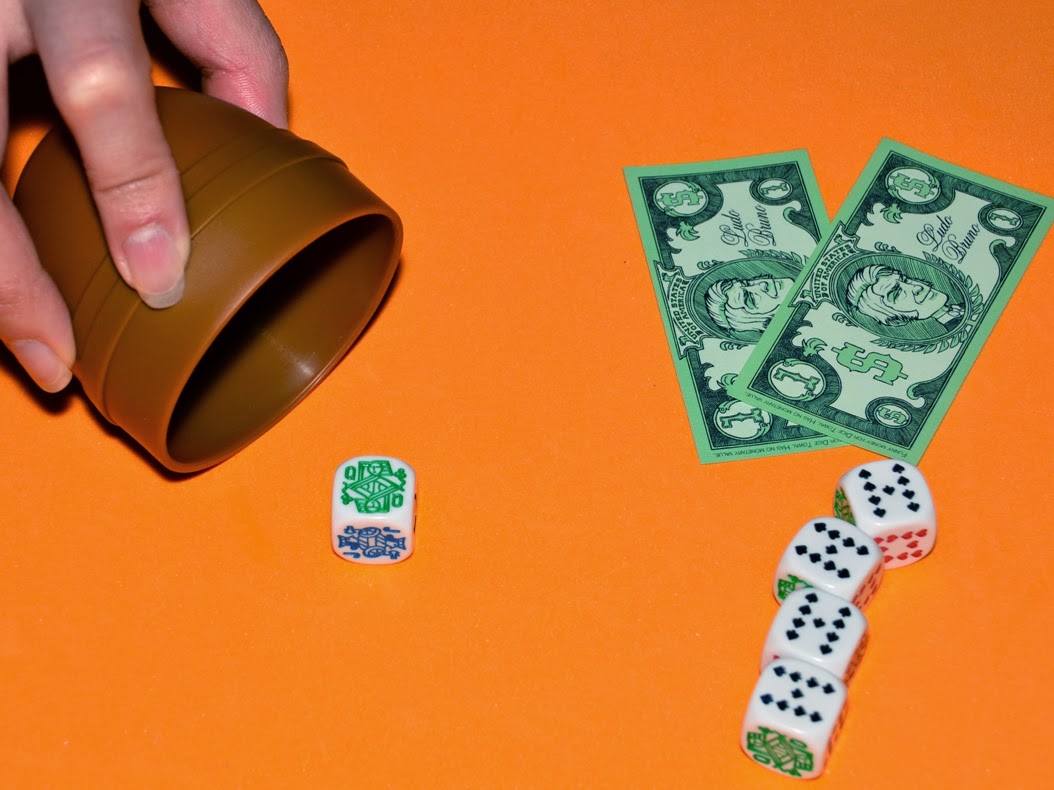 So here, because I want to keep two more 9's (in addition to my "free" 9) I pay 2 dollars as above to the stagecoach and keep the two 9's:

I then re-roll the Queen and the same rules above apply.

The crazy thing about this game is that EVERYONE rolls at the same time. So it can get quite chaotic. (There is therefore a strategy to looking at what other people roll to see if you should compete with them)

If someone finishes before everyone else, they yell "FINISHED".

When that person yells everyone gets one last re-roll of their unkept dice and they must stick to that roll whether they like it or not. This is to prevent people from adjusting their dice after looking at what the finished person's dice are.
Posted by Andre Lim at 01:01