Lists and more lists. I quite like this game, especially when played with a creative and argumentative group.

Players: The Hasbro version allows for 2-4 teams. So potentially an infinite amount of people can play (Eg. 5 per team = 20 players). The original allows for 2 to 6+ players.

Ideally you'd want a crowd for this game.

Price Range (AUD): $37.95 to $64. Honestly quite expensive for what you get inside but most party games are like this.

You actually don't even need to buy the game to play it but the components (namely: a large 20-sided die for each letter of the alphabet less letters QUVXYZ and an hourglass timer) are pretty cool albeit unnecessary luxuries.

Given what the consumer has to pay for the game, I'm amazed it doesn't come with pencils or writing equipment. 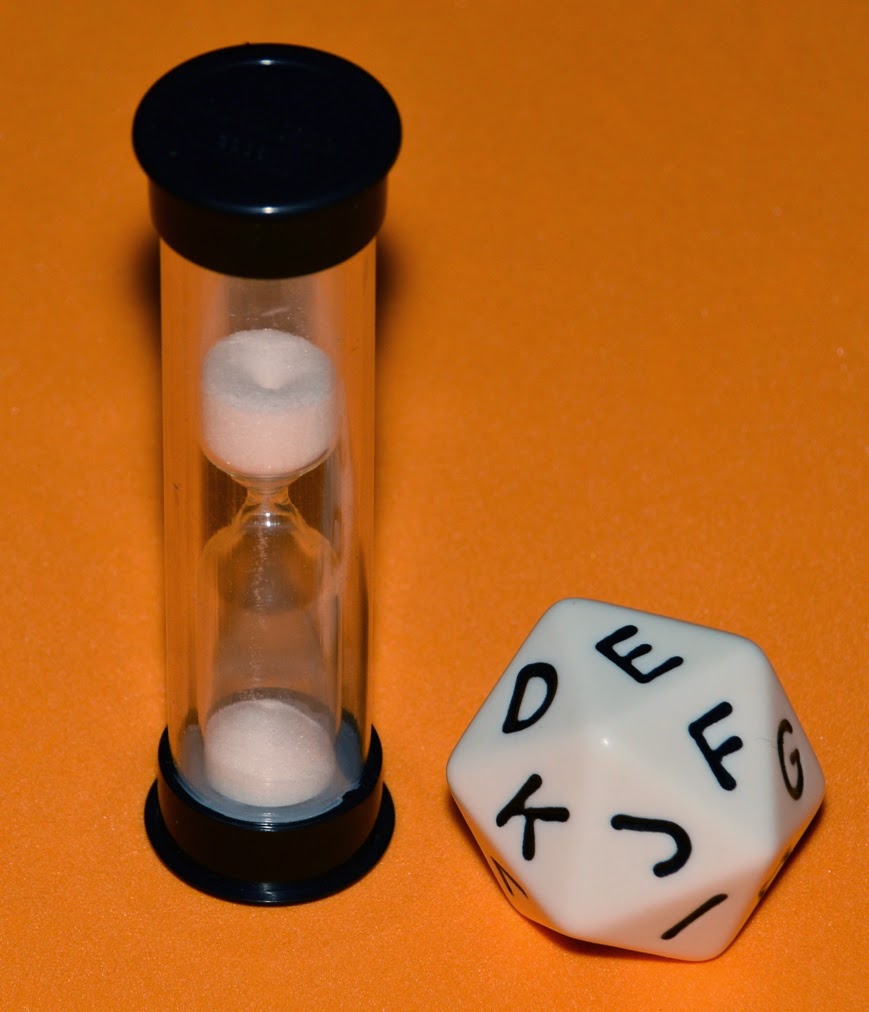 This is a fun party classic where teams must come up with lists of unique words (all of which must start with the same letter) relating to various categories in a time limit of 3 minutes.

The game really should be played with at least 8 people (2 teams of 4 or 4 teams of 2). It isn't as fun if you play with 1 person per team (because, from my experience, you get absolute silence in the room as no one is talking as they are all writing, which can be quite funny sometimes). It can also be quite challenging for those who don't have a good vocabulary.

If you play with argumentative or outspoken people (eg lawyers!) the game can get quite heated as people try to argue in favour of their words [see my Rules section below for more info on this]. This may not suit everyone, but those who enjoy heated conflict will get a kick out of this. Those easily offended and those who don't like arguing should steer clear away from this UNLESS you're playing with friendly people.

*January 2015: Deserves a great, if not excellent, score - I really like this game because it will always produce different outcomes and it sparks people's creativity. Scattergories relies on inherently simple concepts and rules that are intuitive and quick to learn. The words people come up with are funny and unique. Its only real drawback, if it even is one, is that it requires pen to paper...

If you enjoy coming up with lists of words related to a particular category, and the teamwork associated with it, give this a try.

You should also give this a go if you are into party games where everyone has a good laugh.


Each team also receives a writing pad as below (you can use your own paper though):

One team is nominated to roll the die. As soon as it rolls and someone calls the letter on the top of the die out for everyone to hear, the hourglass (which runs for about 3 minutes) is tipped over:

On the writing pad, the row numbers 1 to 12 correlate to Categories 1 to 12 on the list.

For each Category, you must write up to 3 answers and ALL ANSWERS MUST START WITH THE SAME LETTER THAT WAS ROLLED (eg. W as in the picture above).

You are supposed to write 1 word per column (hence 3 columns), but I find that teams can never fill up all the space so normally we just use 1 column for all 3 words.

So for example, if the rolled letter is W, for Row 1 "Boy's Name" I could write Wayne in Column 1 Wenger in Column 2 and Wesley in Column 3.

Now, after time is up, you score points for every UNIQUE word that NO OTHER TEAM has used.

You score double points if you can write two words as one answer. So if the letter rolled was S and you wrote the phrase "Spongebob Squarepants" under the Category 1 of List 1 "A Boy's Name", if the answer is accepted you would score 2 points.

However things can get tricky. Not everyone may agree on an answer.

For example, under Category 12 in List 1 "Foods that kids hate", if the letter rolled was C someone may write "Chicken".

This is a pretty dodgy answer as this would mean almost any word could be written for this category such as "Chips" or "Corn" - the argument runs along the lines that, sooner or later, one kid is bound to hate Chicken, Chips or Corn.

However most people would agree that this is a cheapskate answer that goes against the spirit of the game and is quite frankly, unimaginative. Generally the answer should be something "commonly known" or "widely accepted" to be "foods that kids hate" - chicken wouldn't really fit that criteria as a lot of kids like chicken.

If someone objects to the answer a vote commences. Everyone explains why they think the word should or should not be accepted.

If the majority of voters (or majority of teams, depending on how you want to tally the vote) accept the answer (including the person who wrote the answer) then the answer will be accepted.

The general rule for accepting answers is that people should encourage imaginative or creative "out-of-the-box" answers.

If you start to become too strict on answers, the fun in the game is lost; but, at the same time, if you play too lightly almost every answer will be accepted.

And if you play with argumentative people (especially Lawyers or Law Students!!) or people who say things like "You didn't accept my answer last time so I won't accept yours" that's another way to ruin the game.